Pressure is mounting on the UK Government to upgrade its coronavirus testing as other countries switch to diagnostic kits that take just minutes to produce results.

Boris Johnson today announced testing will be ramped up to 25,000 a day after coming under scathing criticism for letting thousands go undiagnosed. Only 5,000 people were being swabbed daily for COVID-19 previously.

By comparison, South Korea has been testing 15,000 patients every day despite having a population of 50million compared to Britain’s 66million.

But the Prime Minister admitted the NHS will continue to use nasal swab tests that take up to 48 hours to be analysed in a lab.

Other countries around the world – including the US, China, South Korea, Japan and Italy – have been using testing kits that take minutes to produce results.

Although 2,626 cases have been confirmed in the UK, it is feared the UK’s testing regime means more than 70,000 have went undiagnosed.

Here, MailOnline looks at the cutting-edge testing kits currently being rolled out in other counties and at private clinics in Britain:

How it works: Finger prick test

The blood test is not being used in the UK, despite health bodies in China, Italy and Japan diagnosing patients with it.

On March 5, BioMedomics claimed its ‘quick and easy’ test was ready and being used in South Korea, Japan, Italy, China and some countries in the Middle East.

After the sample of blood is collected, a technician injects it into the analysis device – which is about the size of an Apple TV or Roku remote – along with some buffer, and waits 15 minutes.

One line means negative, two lines in a spread-out configuration means the sample contains antibodies that the body starts making shortly after infection.

A blood sample is collected, inserted into the reader, a buffer is combined, and results come back within 15 minutes, the company claims

A small study showed the test produced a correct response 80 per cent of the time.

PHE confirmed it was not using the advanced blood test because it was not accurate enough, and are hoping to develop their own. The US Food and Drug Administration (FDA) is also yet to approve it.

A former PHE strategist said he was ‘not confident’ the test could produce correct results and is therefore unlikely to be rolled out. However, the method was desirable. 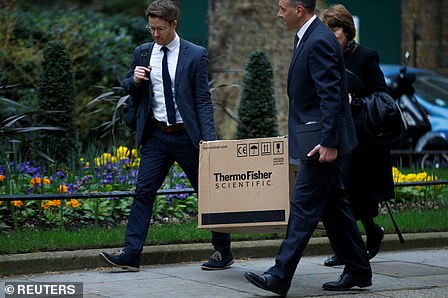 How it works: Nasal swab

The DIY test detects specific DNA given off by the coronavirus in the noses of infected patients.

Samples are then delivered to labs where they are analysed and results are produced within four hours.

The test was approved by the US Food and Drug Administration this week and 5million kits will be sent across America in the coming days.

It is hoped the UK will follow suit after representatives from ThermoFisher, based in Waltham, Massachusetts, were seen entering Downing Street last night carrying a box with the tests.

It is understood ministers were giving a demonstration of how the test works. 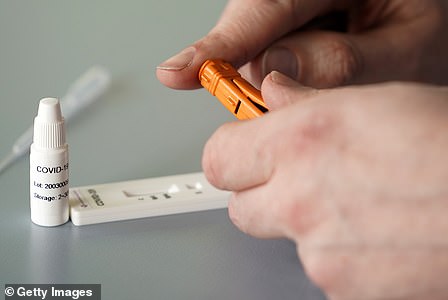 How it works: Finger prick test

The private firm, based in Derby, has created a test which can allegedly determine with 98 per cent certainty if a person is infected.

It involves taking a blood sample via finger prick and then putting it into a screening device. 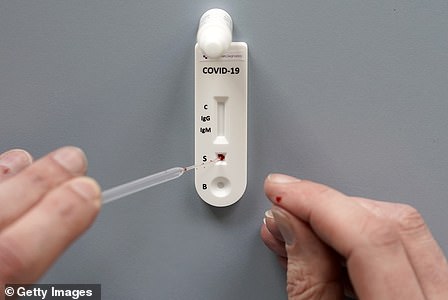 Public Health England cautions members of the public against using such tests amid fears they are unreliable, saying there is ‘little information on the accuracy of the tests’

Results are displayed in a similar fashion to those of an at-home pregnancy test within minutes and could potentially save delays in diagnosis.

SureScreen says its test has been validated and is already being used by private buyers in the UK, Ireland, Germany, Spain, Switzerland, Netherlands, Turkey, UAE, Kuwait and Oman.

It is believed around 175,000 tests have been conducted with the SureScreen kit so far. The company claims it has had over two million orders for next month.

Director David Campbell said: ‘We’ve been working hard to produce a coronavirus test (COVID19) that can be used at the patient side, with capillary blood, easily taken from someone’s fingertip and diagnose them within 10 minutes.

‘There is a big problem with the diagnosis of the disease currently because the standard method of screening is to send samples to the laboratory, which takes a lot of time.

‘Meanwhile, someone could be spreading the virus without knowing, or having the issue of self-isolation.’

How it works: Breath test inserted in a mask

Scientists have started a trial of the pioneering £2 gadget, which tests have already proven can detect tuberculosis, a deadly lung infection. 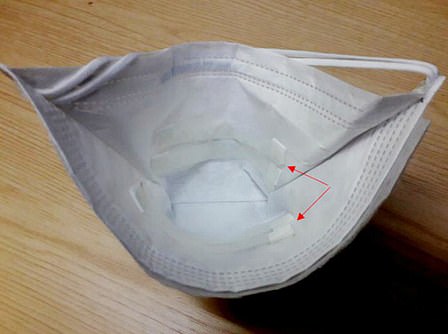 Scientists have started a trial of the pioneering £2 gadget (pictured), which tests have already proven can detect tuberculosis 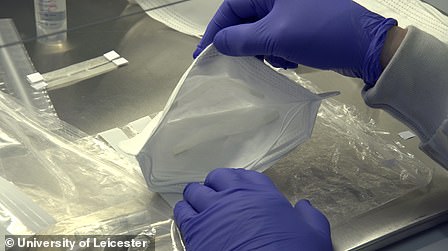 The masks, which could cost pennies if manufactured on a wider scale, are fitted with strips that soak up droplets from the wearer’s breath, which may be carrying traces of bacterial or viral infection.

The strips can be tested in labs with results coming back within hours. Current tests for coronavirus can take up to 48 hours.

University of Leicester researchers believe it will be at least two months before they can test the masks on actual COVID-19 patients.

But they are hopeful it will work because it is a respiratory disease, meaning it infects the lungs and can is present in the air people breathe out. 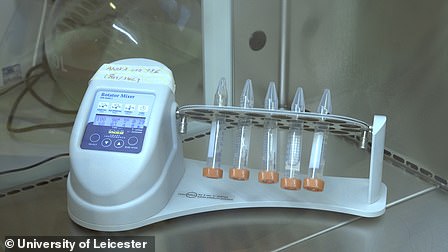 After 30 minutes, the strips can be tested in a laboratory (pictured)

First, the team have to test the gadgets on dozens of patients with other lung infections to prove they can pick up bugs other than tuberculosis, which they were designed for.

Patients with infections such as flu and bronchitis will have the results from their mask tests compared to those from throat swabs, which are known to be accurate.

Tests on tuberculosis patients, the only ones that have been done so far, show the masks can detect the killer disease almost 90 per cent of the time.

Leicester’s Professor Mike Barer and colleagues are hopeful they will be successful because the coronavirus infects the lungs in a similar way to tuberculosis.

How it works: Breath test

A breath test that helps rapidly identify patients with coronavirus has been developed by British scientists.

The technology, developed by a team at Northumbria University in Newcastle, is still in development and needs further testing.

But experts believe it could be quickly change the way the virus is spotted around the world.

The Northumbria team’s test collects breath samples which can be tested separately for biological information – known as biomarkers.

These biomarkers, which include DNA, RNA, proteins and fat molecules, can spot diseases of the lung and other parts of the body.

People simply breath into the device, which is similar to a breathalyser used by the police.

Dr Sterghios Moschos, associate professor at Northumbria University, said: ‘Our ambition is to reduce the need for bloodletting for diagnosis in its broadest sense.’

The test is currently being trialled.

On its website, the item can be easily ‘added to cart,’ much in the same way as conventional online products

How it works: Nose and throat swab

More than 2,000 people have ordered a £375 home testing kit from a Harley Street clinic in London after being turned down by the NHS, according to the Daily Telegraph.

In addition to individuals, some 60 firms including oil and telecoms companies, have bought them for their staff. 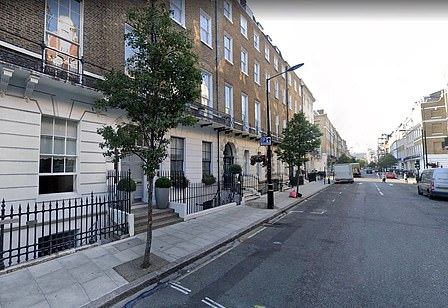 Dr Mark Ali, director of the Private Harley Street Clinic on London’s world-renowned medical avenue, said his practice was offering a new kit for £375 each

The test is posted to the client’s home or preferred address, where the client takes swabs from both the nostrils and throat.

The sample is then placed in the box provided and posted back as per the instructions.

Dr Mark Ali, director of the Private Harley Street Clinic on London’s world-renowned medical avenue, said his practice was offering a new kit for £375 each.

On its website, the item can be easily ‘added to cart,’ much in the same way as conventional online products.

The practice says the test is ‘performed by a world renown UKAS accredited British laboratory and the test results are 100% accurate and do not require further tests to confirm any diagnoses.’

The website hastens to add, that though it oversees the entire process, patients should not attempt to pick up their kits from Harley Street.

‘Please note under no circumstances can this test be done in our clinic or be collected from our clinic.’ The website states.

‘It is sent to your designated address by courier service within 48 hrs. Please refer to the details below and order through the link at the bottom of this page.’

Dr Ali told The Telegraph he has received countless requests from buyers.

‘People are worried sick. They want to get some clarity back in their lives,’ he told The Telegraph.

‘We’ve got university students in England who want to go back to Nepal, but need to know if they have the disease so they can be let back into their own country.

‘We’ve got a businessman who owns a construction company employing 60 people. He needs to know the state of play, or he risks letting down his customers. So every single person in that company is being tested.’

Who came up with the idea? Mount Sinai Health System, New York

How it works: Detects lung damage

Doctors from The Mount Sinai Health System in New York say CT scans may be faster than nasal and throat swabs at diagnosing coronavirus patients.

The team were the first in the US to analyze lung scans of patients in China with the highly contagious disease.

They said they were able to identify specific patterns in the lungs as markers of the virus, also known as COVID-19, as it developed over the course of about two weeks> 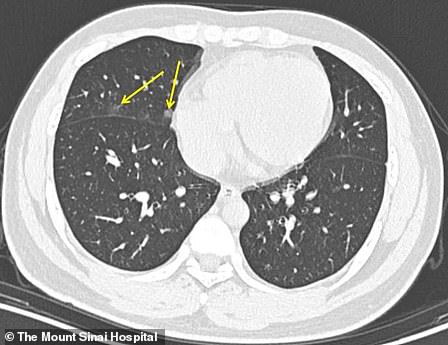 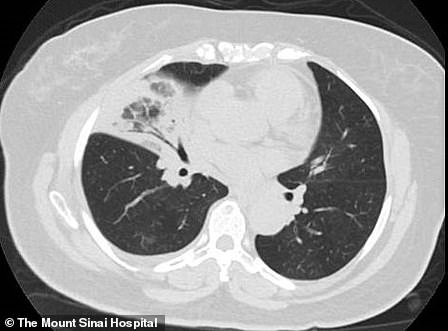 The researchers say these quicker diagnoses could help keep patients isolated in early stages of the disease, perhaps even before symptoms appear and when it may not show up on other scans such as chest X-rays.

‘CT scans are an extremely powerful diagnostic tool, because you can seen the inner organs in a three-dimensional way,’ lead author Dr Adam Bernheim, an assistant professor of diagnostic, molecular and interventional radiology at the Icahn School of Medicine at Mount Sinai, told DailyMail.com.

‘And you can see the manifestation of many diseases.’

For the study, published in the journal Radiology, the team analyzed scans of 94 patients at four medical centers in four Chinese provinces.

The patients had been admitted between January 18 and February 2, and all had either recently traveled to Wuhan – the epicenter of an outbreak – or had come into contact with an infected person.

Radiologists reviewed the scan and took notes based on when symptoms first appeared and when the CT scan was performed.

Thirty-six patients received scans zero to two days after reporting symptoms and more than half showed no evidence of lung disease.

The team says this is important because it suggests that CT scans cannot reliably detect coronavirus in its very earliest stages.

Nasal and throat swabs test can identify patients even before patients become symptomatic, although some may still have the virus if they first test negative.

Its results, however, may take days to get back from the agency’s labs.

But 33 patients who received scans three to five days after symptoms developed had patterns of ‘ground glass opacities,’ or haziness in the lungs’The lung abnormalities are very round in shape and affect the perimeter of the lung,’ co-author Dr Michael Chung, an assistant professor of diagnostic, molecular and interventional radiology at the Icahn School of Medicine at Mount Sinai, told DailyMail.com.