Teachers today demanded clarity from the government over ‘disturbing’ suggestions about reopening schools .

The National Education Union (NEU) has written to ministers asking to see the government’s evidence on the impact of allowing pupils back.

It warned acting too early in the coronavirus crisis will result in an ‘increased risk’ to staff and children, and could ‘undermine people’s resolve to stick to social isolation’.

The alarm comes after headteachers suggested that schools should reopen for a period before the summer holidays – rather than in September – if scientific evidence says it is safe to do so.

Schools in England closed more than three weeks ago to the majority of pupils, apart from the children of key workers and vulnerable pupils, due to the coronavirus outbreak.

There is no indication yet as to when they may be able to reopen but the NEU is concerned that the idea is being pushed by ‘unnamed Government ministers’.

The National Education Union (NEU) has written to ministers asking to see the government’s evidence on the impact of allowing pupils back. Pictured, a child of key workers at Oldfield Brow Primary in Altrincham last week

The union – which represents 450,000 teachers and lecturers and it the largest in Europe – is calling on Mr Johnson to consider the increased number of cases and mortalities among children, parents and teachers if schools were to be reopened.

The letter, from joint general secretaries Mary Bousted and Kevin Courtney, says: ‘Our members are disturbed, however, by increasing media speculation that schools will soon be reopened.

‘We consider this speculation to be most unhelpful: it may undermine people’s resolve to stick to social isolation.’

The union warned it would be ‘foolhardy’ to assume any social distancing can be implemented in schools.

The letter also called on Mr Johnson to clarify whether there are any plans to establish regular testing of children and staff, increase access to personal protective equipment (PPE) and enhance cleaning as these areas are all ‘experiencing severe difficulties’.

It adds: ‘Given that an early return to full school populations will mean an increased risk to our members and the children in their care, we are writing to ask you to share your modelling, evidence and plans.’

Education Secretary Gavin Williamson is understood to be deeply concerned about how school closures are affecting pupil progress.

Sources said he does not want schools reopened until it is safe, but is worried about the lack of pupil-teacher interaction.

It comes after Professor Paul Cosford, emeritus medical director for Public Health England (PHE), suggested that one of the first lockdown measures to be lifted could be school closures.

Speaking to the BBC Radio 4 Today programme on Friday, he said: ‘We do know that children are at very low risk of getting complications from this disease. 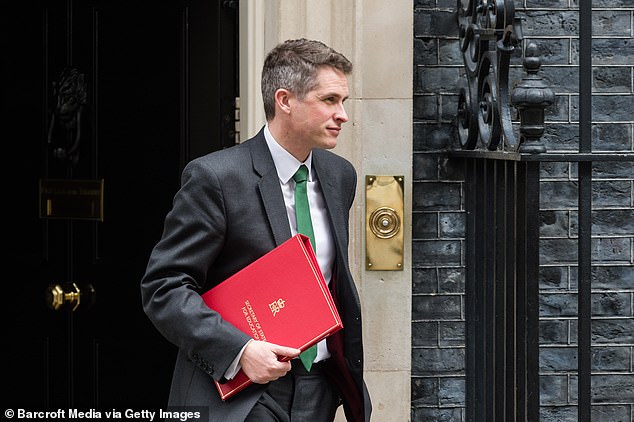 ‘The importance of children’s education, children being in school, is paramount.

‘I could conceive of circumstances in which some of the restrictions are lifted sooner and some are lifted later.’

Last week, a study led by researchers at University College London indicated that school closures do not appear to have a significant effect on the spread of infections during outbreaks such as Covid-19.

Researchers found that school closures alone were predicted to reduce deaths by around 2% to 4% amid the Covid-19 outbreak in the UK, which is less than other social distancing measures.