Coronavirus US: Texas pauses reopening after surge in cases

The Governor of Texas is pausing the state’s aggressive reopening as it battles a surge in record coronavirus cases and hospitalizations that has made it a virus hot spot.

Republican Gov. Greg Abbott announced on Thursday he was halting elective surgeries in the largest counties and said the state would ‘pause’ its aggressive reopening weeks after he began lifting restrictions.

The move came just one day after rapidly worsening coronavirus numbers in Texas continued to reach bleak milestones with the state reporting a record 5,550 new cases in a single day.

The state has reported more than 11,000 new cases in the previous two days alone. 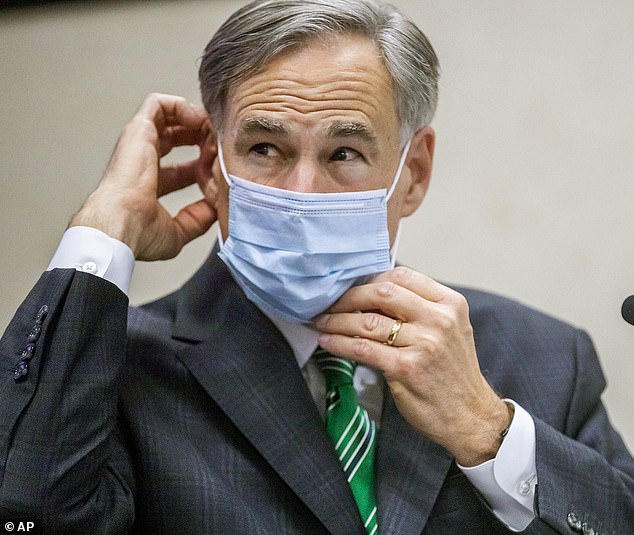 Republican Gov. Greg Abbott announced on Thursday he was halting elective surgeries in the largest counties and said the state would ‘pause’ its aggressive reopening weeks after he began lifting restrictions

On Thursday, the number of hospitalizations climbed to nearly 4,400 patients, setting a new record for a 13th consecutive day.

The surge in hospitalizations has resulted in the largest pediatric hospital in the country opting to start treating adult patients in Houston to help free up beds.

Statewide, the number of COVID-19 patients has more than doubled in two weeks.

The suspension of elective surgeries is designed to protect hospital space in the Dallas, Houston, Austin and San Antonio areas.

The pause on reopening does not roll back previous orders that already allowed much of the economy to reopen.

Instead, the pause will slow down any planned expansion of occupancy levels at places including bars, restaurants, amusement parks and other venues.

The state was among the first in the country to begin lifting its lockdown measures on May 1.

‘We are focused on strategies that slow the spread of this virus while also allowing Texans to continue earning a paycheck to support their families,’ Abbott said in a statement.

TEXAS HOSPITAL: In Texas, which began lifting its shutdowns on May 1, hospitalizations have doubled and new cases have tripled in two weeks

TEXAS DEATHS: The state recorded an additional 29 deaths on Wednesday compared to the record 58 on May 15 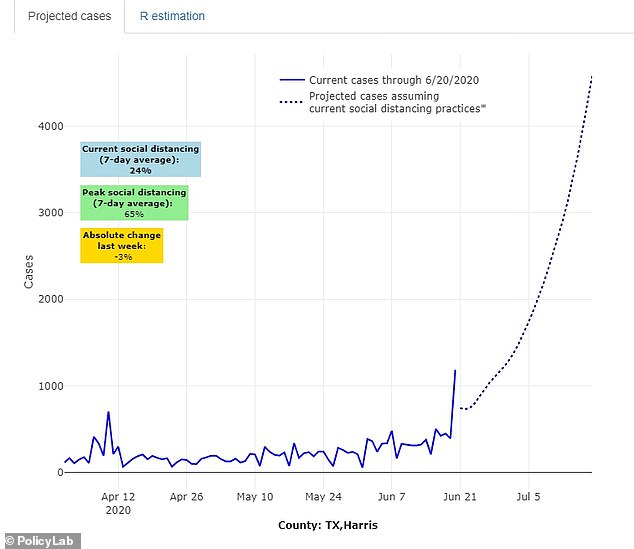 HOUSTON FORECAST: In Houston, daily infections are forecast to increase to more than 4,500 in the same time frame, according to PolicyLab projections

‘The last thing we want to do as a state is go backwards and close down businesses. This temporary pause will help our state corral the spread until we can safely enter the next phase of opening our state for business.’

By reimposing a ban on elective surgeries, the Republican Gov is returning to one of his first actions when the virus first emerged in Texas in March.

He later rescinded the order during an aggressive reopening of the state in May that lifted lockdown orders ahead of most of the country.

Abbott this week has taken a newly urgent tone about the worsening trends and is now telling the public they should stay home.

He has also urged Texans to wear masks in public.

The governor hasn’t issued a statewide mask order, but the state’s cities and counties have imposed new orders on businesses to require customers and workers to wear face coverings.

Abbott initially barred local officials from fining or penalizing anyone for not wearing a mask as the state reopened. After cases began spiking, Abbott said last week that cities and counties could allow businesses to require masks.

As cases continue to rise, forecast models from the PolicyLab at Children’s Hospital of Philadelphia predict that Harris County, which includes the city of Houston, will see daily infections increase to more than 4,500 by July 18. 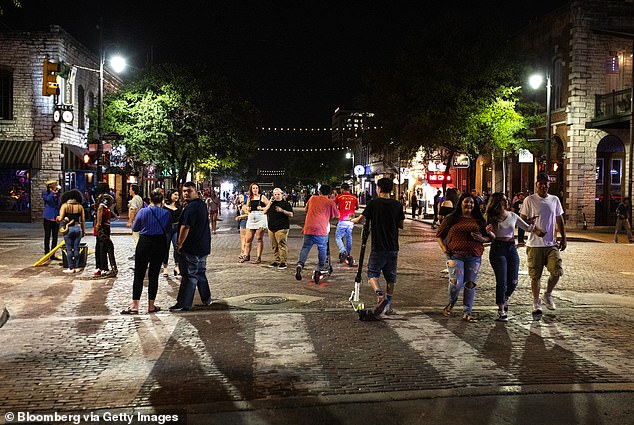 People gather on Sixth Street at night in downtown Austin, Texas on May 23. Texas bars, bowling alleys and other businesses were able to reopen for the start of Memorial Day weekend as part of Governor Greg Abbott’s efforts to revive the state’s shattered economy 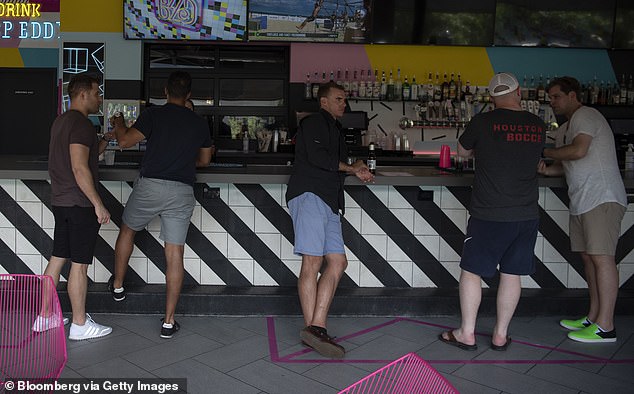 People stand at a bar in Houston, Texas on May 23. The new pause on reopening does not roll back previous orders that already allowed much of the economy to reopen 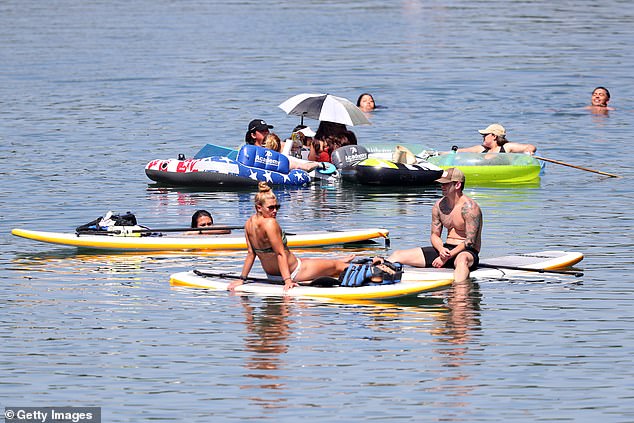 Residents swim, paddle board and kayak in Barton Creek on May 20 in Austin, Texas after the state aggressively started lifting lockdown measures

Peter Hotez, dean of the National School of Tropical Medicine at Baylor College of Medicine, told Bloomberg on Thursday that such a situation would be ‘apocalyptic’.

He said the worst was still yet to come because of ‘the huge amount of transmission going on in our community’.

It comes as health officials warn coronavirus cases are climbing rapidly among young adults in a number of states where bars, stores and restaurants have reopened – a disturbing generational shift that not only puts them in greater peril than many realize but poses an even bigger danger to older people who cross their paths.

In states like Texas, young people have started going out again, many without masks, in what health experts see as irresponsible behavior.

‘The virus hasn’t changed. We have changed our behaviors,’ said Ali Mokdad, professor of health metrics sciences at the University of Washington in Seattle.

‘Younger people are more likely to be out and taking a risk.’

Health experts say the fact that younger people – who have so far been less likely to be hospitalized – are now accounting for a large number of the new cases could have have an impact on the death toll in several weeks.

They point to the fact that young people could currently be infecting their elderly relatives and other at-risk people, which could drive up hospitalizations and deaths.