A coroner has warned parents about sleeping with their babies after a six-day-old baby died while being cradled by his sleeping father.

Joseph Lee, known as Joey, had taken a good feed and was alert before falling asleep as his parents Amy Willis and Kevin Stanley watched TV, an inquest at Exeter Coroners Court heard.

Mr Stanley, from Moretonhampstead, Devon, later told police that he woke at 1am and went to get some ice cream when he realised his son had stopped breathing.

A coroner has warned parents about sleeping with their babies after six-day-old baby Joseph Lee died while being cradled by his sleeping father Kevin Stanley. Stock picture shows a baby sleeping on his father

The cause of the infant’s death could not be determined following an autopsy.

But coroner Philip Spinney suggested that the pair sleeping together could have been a contributing factor and used the situation to warn other parents about the dangers of co-sleeping with infants.

Mr Stanley had around four ciders on the night of Joey’s death but was not drunk, the inquest heard.

He told police that becoming a father had given him a reason to turn his life around, and that he did also not recall being given any advice about co-sleeping.

Amy, who was on pain relief following an operation, told police how the couple had not yet been able to establish a sleeping routine for the infant.

She said he slept in a mosses basket, with the couple and also on the sofa with a breastfeeding cushion around him.

Both parents voluntarily had their bloods tested for substance misuse and no drugs were detected.

‘There is nothing that can be done at post mortem to confirm that.

‘There are known risk factors of co-sleeping on the sofa and parental use, in the broadest sense of drugs/ medication and alcohol, and possibly that both new parents were exhausted.’

Dr Cook added: ‘Laying a baby on its own on its back in a cot is the best advice.’

The inquest heard that Joey was described by his parents as a healthy baby before he died.

Ms Willis, who is now pregnant again, told police she did not remember being told anything by health professionals about safe sleeping with babies.

She said she had successfully co-slept with her eldest child.

She said during the inquest: ‘There is a list of thing I should have known.

‘It was just a lack of judgement as he was so colicky so we got used to bending the rules. We slept in ways I would not have at night.

‘I thought Joey would wake up five minutes after we got 40 winks, but it was just not going to happen that way.’

She told how the couple had met through mutual friends in 2016 when Mr Stanley had been living on a travellers site.

At the time of Joey’s death, he was said to have reduced his alcohol intake. 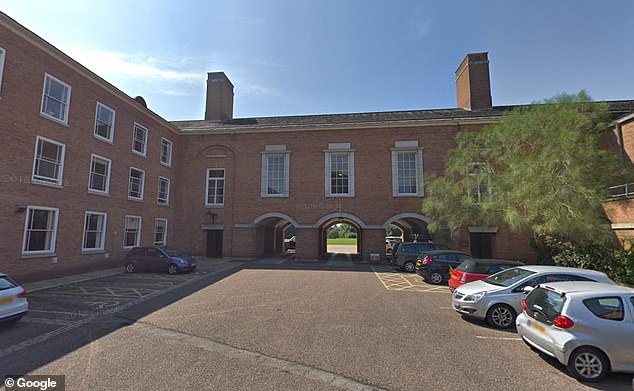 The cause of death could not be determined following an autopsy, however, Dr Deborah Cook suggested at his inquest at Exeter Coroners Court (pictured) that co-sleeping could be a contributing factor

Sudden infant death syndrome (SIDS) was excluded as a possibility as it is associated with babies sleeping on their own.

Recording an open verdict into his death,  Mr Spinney said: ‘The evidence has not been able to fully disclose how Joey came by his death.’