Could this be the ultimate hack for train travellers?

To add insult to injury, ticket prices went up yet again at the start of the year (they’ve risen by 36 per cent since 2010).

But all is not lost. There is one way to capitalise on the shambolic pricing policy of train companies and avoid attempts by sites such as thetrainline.com to fleece customers.

It involves ‘split ticketing’ or ‘fare splitting’, which is completely legal, fast and efficient. Crucially, it can save as much as 90 per cent off the price offered by train operators, despite their claims of ‘best price guaranteed’.

It works in two ways. For a direct journey, instead of buying one single ticket for a trip from, say, London to Manchester, you buy two, three, or even six different single tickets for different legs of the journey and stay on the exact same train and, quite possibly, in the same seat.

Or, if time allows, you may be able to save even more by changing trains and, again, using a series of tickets for one overall trip.

Seats can be reserved (though the seat number may change on the different legs of the journey) and you collect your tickets from the station at the beginning of your journey in the usual way.

All that’s required for your trip to be valid is that the train must stop at each of the stations listed on your tickets.

So, to get to Manchester, you might end up buying a ticket from London Euston to Milton Keynes Central; another from Milton Keynes Central to Stoke-on-Trent; another from Stoke-on-Trent to Stockport; and a final one from Stockport to Manchester Piccadilly — in this instance staying on the same train the entire way. None of which you would be offered by Virgin Trains, which runs that line, or National Rail or Trainline. 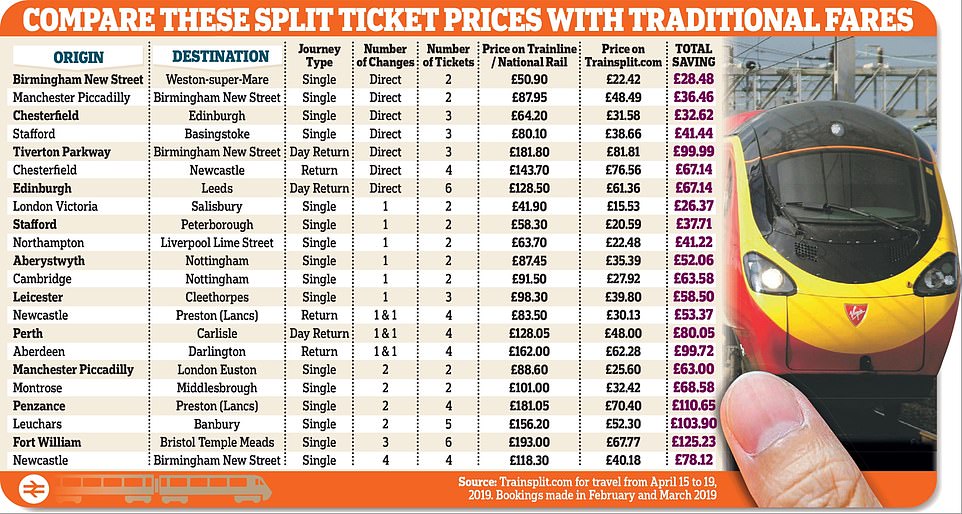 ‘Split ticketing’ can save as much as 90 per cent off the price offered by train operators, despite their claims of ‘best price guaranteed’

So absurd are the anomalies — and taking into account the huge differences between peak and off-peak fares — that, in 2017, a football fan and his partner travelled from Newcastle to Oxford to watch their team play an away fixture in the FA Cup carrying 56 separate tickets between them, saving £30 in the process.

‘If you go on the individual train company sites or Trainline, you won’t necessarily be offered all the cheaper options that are available,’ says Mike Richardson, a co-founder of the website trainsplit.com, part of the Raileasy group.

The Rail Delivery Group, which represents all train operating companies, blames it on the 1994 Ticketing and Settlement Agreement not having been updated. Robert Nisbet, director of nations and regions for the Rail Delivery Group, told the Mail: ‘People shouldn’t have to know the tricks of the trade to get a fare that works for them. We want a fares system that makes life easier for everyone — but this requires Government legislation.’

In the past, Mr Nisbet has described firms such as Trainsplit as ‘cheats’. But his critics point out that the rail companies forever talk about wanting to make the system easier and less complicated for passengers, but do or say very little to make fares cheaper.

This is, in part, because they don’t have on their booking systems the necessary algorithms (a set of rules in a computer program) to find people the cheapest journey options and fares.

Many of them, including National Rail, use old journey planners that are programmed to find the fastest or earliest arrival time, but not the cheapest.

Arguably, it is the moribund rail companies that are ‘cheating’ passengers.

Trainsplit passengers are not charged a booking fee, but pay 10 per cent on the saving they have made.

So, if you buy a ticket from London to Newcastle for £90 via Trainsplit and the standard fare costs £100 on LNER (London North Eastern Railway), then the saving is £10, which means you would pay Trainsplit £1.

It’s possible, but unlikely, that the Department for Transport, could ban fare splitting sites such as Trainsplit.

When asked about this on the BBC Radio 4 You And Yours programme, Nisbet accepted that a ban would be ‘unpopular with some people’, but added that a recent poll showed ‘half of those surveyed are not confident about using split ticketing’.

Yet they wouldn’t need to use split ticketing at all if Britain’s rail system was up to speed.