Council chiefs have been urged by ministers to do everything they can to protect railway, bus and coach stations against vehicle terror attacks.

In a report published yesterday, the Department of Transport said bollards, benches and walls are ‘key front line measures’ to protect stations from a potential vehicle borne explosive device or a ‘vehicle being used as a weapon to deliberately target pedestrians’.

The guidance for local councils and transport officials has been published in the wake of a string of vehicle terror attacks – including Westminster Bridge and Borough Market in London.

This is the first time it has been updated since 2003, when authorities were more concerned about more traditional forms of terror attacks such as hidden explosive devices planted in bins.

The 2003 report contained no mention of ‘hostile vehicle mitigation’ – the term used for measures to prevent vehicle attacks.

In its latest report, the DFT urged councils to assess what ‘clutter’ they ‘can do without’ outside stations, including bins which can be used to conceal explosive devices.

But it stressed they should not remove anything that could prevent a terrorist targeting pedestrians.

It said ‘this approach should not be applied to existing Hostile Vehicle Mitigation measures or those elements of street furniture that can help deter a ‘vehicle as a weapon’ attack against predictably crowded spaces’.

Councils have also been encouraged to install bulky ‘planters’ with flowers around stations – which as well as making them look nicer – act as an effective blockade for vehicles.

Major transport hubs such as railway and coach stations are viewed as prime targets for terrorists, as highlighted by the explosive device planted at Parsons Green tube station last month.

Local authorities removed bins from railway stations after a string of IRA attacks in the 1980s. 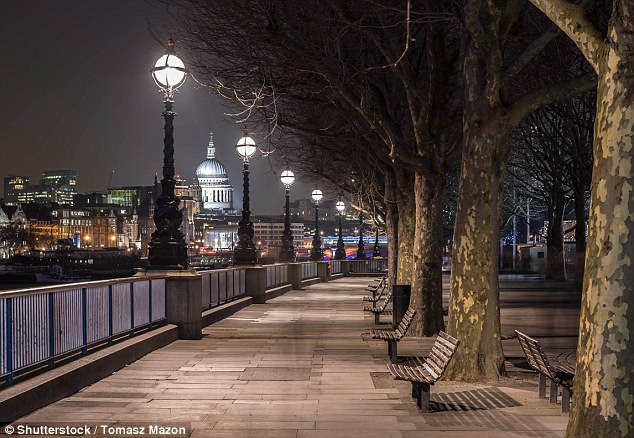 Local council guidance on anti-terrorism has not been updated since 2003, when there was no mention of ‘hostile vehicle mitigation’

They have gradually returned as bomb proof bins and see through bins -involving a clear plastic sack suspended from a metal hoop – have been developed.

Following the Westminster Bridge attack, in which five people were killed, local councils and Transport for London have been installing more concrete barriers and bollards on bridges to protect pedestrians.

Network Rail said it has been installing more bollards and planters at major stations across the country – including London Kings Cross and Birmingham New Street – in recent years.

Will Geddes, chief executive of security consultants ICP said: ‘Any preventative strategy has to consider all different methods of attack.

‘Train stations are on the radar for Islamic state and extremists.

‘They are looking for highly populated areas which gain some publicity value.

‘At rush hour or in peak times you have vast numbers of people coming in and out of stations.

‘Installing more preventative measures makes common sense. But this has to be done at all stations, not just major transport hubs, so terrorists know there are no weak spots.

‘Ultimately it depends on whether local councils have the resources, time and inclination to take action.’

Local councils have also been urged to improve street lighting around stations and make sure there are no blind spots in their CCTV coverage to make it more difficult for criminals and terrorists to hide.

Other proposed measures include minimising the number of bins outside stations and either using blast resistant bins or clear plastic sacks suspended from a wall mounted frame or a free standing post.

DFT officials said councils should empty bins regularly and make sure they do not overflow to make it harder for a terrorist to conceal an explosive device.

Even bicycle racks and lockers must be safe-proofed. 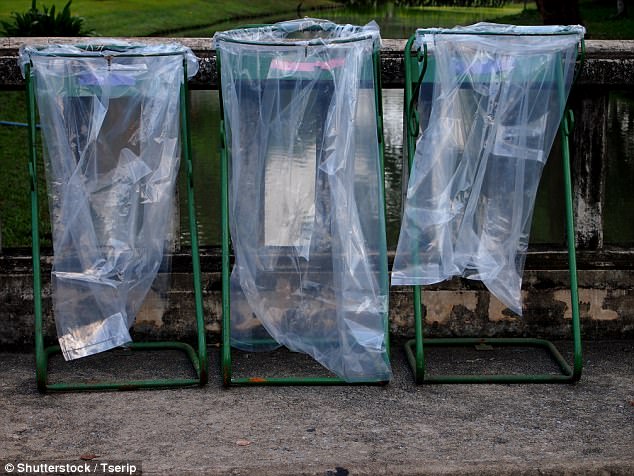 Bins were removed from train stations in the 1980s after a series of IRA attacks, they have gradually been brought back in, but have been made transparent and ‘bomb proof’

Bicycle racks, which could be used to hide an explosive device, should not be positioned opposite station entrances and exits, while lockers should have mesh sides or ‘vision ports’ so it is possible to see inside even when it is getting dark.

Vending machines must be ‘fitted flush to walls’ or back to back with other machines, so ‘nothing can be easily hidden behind them or around any sides’.

A DfT spokesperson: ‘The safety of the travelling public is our top priority, and we keep security arrangements under constant review.This is a routine update of our existing guidance to help councils protect people using stations.’

A Network Rail spokesman said: ‘For several years now we have been designing our new and revamped stations with added security measure built-in, such as vehicle proof bollards, to protect public spaces.’

Cllr Simon Blackburn, Chair of the Local Government Association’s Safer and Stronger Communities Board, said: ‘Councils take their responsibilities to protect their residents incredibly seriously, and this includes making sure that transport hubs are safe and that any security risks are mitigated.

‘Local authorities work closely with the police, emergency services, and other local partners to evaluate local risks and ensure appropriate steps are taken to protect residents.

‘Councils will be looking at the guidance from the Department for Transport and determine what measures are appropriate for their local area.’