Countries with populations that have higher levels of trust in each other saw Covid cases and deaths fall faster, a study has found.

Exeter University experts found nations where at least 40 per cent of the population agreed with the statement ‘most people can be trusted’ were more successful in bringing down Covid rates from peak levels in the first year of the pandemic.

The UK barely meets the 40 per cent threshold, while up to 74 per cent of people in Scandinavia trust each other, compared to 63.5 per cent in China and 37 per cent in the US.

The team believes this is because restrictions in place to suppress the spread of the virus – such as face masks and social distancing – ‘depend on mutual trust to be effective’.

Professor Tim Lenton, one of the researchers, said: ‘Our results add to evidence that trust within society benefits resilience to epidemics.

‘Building trust within communities should be a long-term project for all nations because this will help them cope with future pandemics and other challenges such as extreme events caused by climate change.’

Exeter University academics found nations where at least 40 per cent of the population agreed with the statement ‘most people can be trusted’ were more successful in bringing down Covid rates from peak levels in the first year of the pandemic.  China, Denmark, Finland, Norway and Sweden have some of the most trusting populations. The UK met the 40 per cent threshold, while the US fell below it. The graph shows Norway and Denmark saw cases fall back to low levels faster than the UK and US 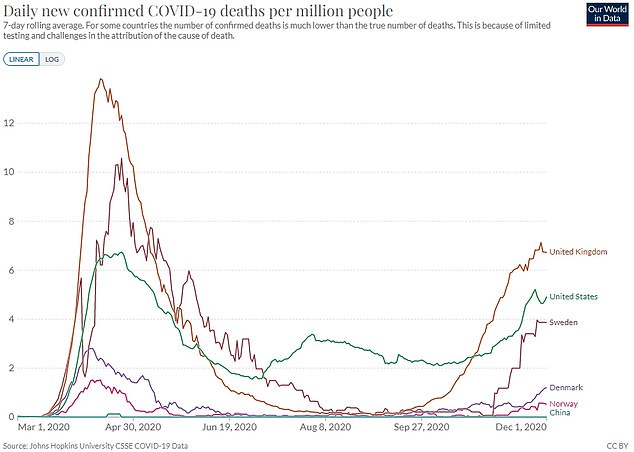 The researchers said the most trusting societies saw cases fall up to 40 times faster and deaths drop 25 times quicker than the least trusting. The data shows Covid deaths returned to low levels faster in Denmark, Norway and China compared to the UK and the US, where the populations were less trusting

The graph shows a correlation between the speed at which Covid cases (left) and deaths (right) fell and how trusting populations are. Countries where at least 40 per cent of the population agreed with the statement that ‘most people can be trusted’ saw infections and deaths fall faster from the peak in the first year of the pandemic than places where societies are less trusting 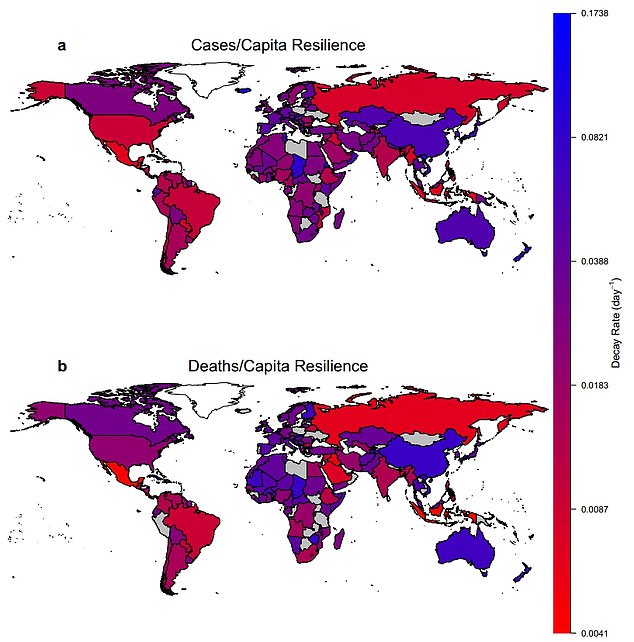 The researchers used Oxford University platform Our World in Data to measure the daily change in coronavirus infections and deaths from peak levels between the start of the pandemic and December 1 – before vaccines were widely rolled out.

The study, published in the journal Scientific Reports, found countries where at least 40 per cent of people said the majority of others could be trusted ‘achieved a near complete reduction’ of new cases and deaths.

What societies are the most trusting?

The most trusting societies saw cases fall up to 40 times faster and deaths drop 25 times quicker than the least trusting, the team said.

Mauritius saw cases fall at the fastest rate from the first peak in 2020.

However, the experts noted some nations which did not meet the 40 per cent threshold also saw a sharp decline from peak cases and deaths, ‘indicating that trust in each other is only one of several factors at play’.

The team said their findings show strict Covid curbs do not have the same effect when applied in different countries.

Most nations implemented similar rules at the start of the pandemic but had ‘hugely varying success in bringing down case numbers and deaths’, they said.

‘This is partly because more stringent governments tend to be associated with less trusting societies,’ according to the researchers.

The experts wrote: ‘These results add to evidence that trust can improve resilience to epidemics and other unexpected disruptions, of which Covid is unlikely to be the last.’

It comes as Chinese city Anyang, in the Henan province, entered a fresh lockdown today, placing a stay-at-home order on five million people as the country battles a spike in cases, in part fuelled by Omicron.

Last week, one million people in Yuzhou — also a city in Henan — were told to stay at home, while Xi’an, home to 13million people, is in its third week of lockdown.

The new curbs in Anyang mean all non-essential businesses have been forced to close and a mass-testing drive has been launched to stop the variant spreading.

And all travel out of the city has been restricted in an attempt to stop the variant spreading into other parts of the country.

China reported 110 new local virus cases Tuesday, a tiny figure compared to the more than 140,000 recorded in the UK and more than 1.5million registered in the US yesterday.

But they are a cause of alarm for Chinese authorities as they prepare to host the Winter Games in Beijing, with the event already expected to have tight coronavirus safety protocols.

Tianjin, which is adjacent to Winter Olympics venues in Beijing and Hebei province, confirmed another 10 new locally transmitted cases after citywide mass testing.

The UK initially avoided imposing Covid restrictions because of fears people would get ‘fed up’ of abiding by rules adopted in other countries.

But Britons have since spent several months over the last two years following stay-at-home orders, avoiding seeing friends and family and working from home.