Covid-19 is ‘the most severe’ emergency WHO has declared

The coronavirus pandemic is ‘easily the most severe’ emergency that the WHO has ever declared, the agency said today as global cases surged past 16million.

The global tally has risen by a million in just four days, led by massive outbreaks in the United States, India and Brazil which are each piling up tens of thousands of new cases per day.

South Africa is also seeing more than 10,000 new cases a day while places such as Spain, Belgium and Hong Kong are facing second waves of the disease.

WHO chief Tedros Adhanom Ghebreyesus said the number of cases had doubled in just six weeks as he warned today that ‘the pandemic continues to accelerate’.

However, while cases have been surging at record levels, global deaths have remained stagnant at around 30,000 to 40,000 per week.

Speaking nearly six months after the WHO first declared a global health emergency, Tedros said scientists were ‘still learning’ about how to tackle the virus.

‘This is the sixth time a global health emergency has been declared under the International Health Regulations, but it is easily the most severe,’ he said.

‘Almost 16million cases have now been reported to WHO, and more than 640,000 deaths,’ he said before cases did cross the 16million threshold.

‘And the pandemic continues to accelerate. In the past six weeks, the total number of cases has roughly doubled.’

When the health emergency was declared on January 30 there were fewer than 100 cases outside China, Tedros said.

According to WHO figures, the world passed one million confirmed cases on April 4, by which time much of the West was in lockdown.

The world reached five million cases on May 23 – 114 days after the declaration of the health emergency – but the next five million took only 36 days until June 28.

The jump from 10million to 15million took only 26 days until July 23, and the latest million cases have been recorded in the space of only four days.

The United States, India and Brazil – the three countries with more than a million confirmed cases by themselves – are taking the brunt of the latest surge.

Elsewhere in Latin America, countries including Mexico, Colombia and Argentina are all piling up thousands of new cases per day, with Mexico’s death toll now nearly as high as Britain’s. 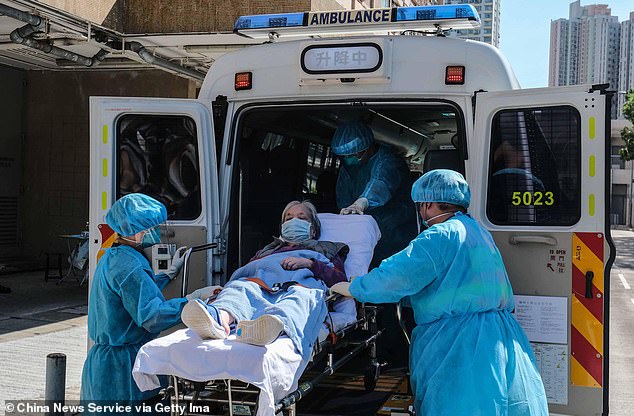 Hong Kong is among the places suffering a second wave of coronavirus cases (pictured, an elderly person is transferred from a nursing home in the Chinese-controlled city on Friday) 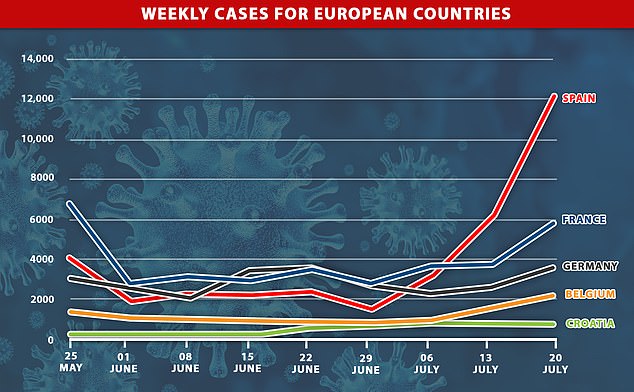 Some European countries have seen a rise in cases in recent days, including Spain which has seen Britain, France and Norway impose new travel restrictions towards it

Tedros praised countries such as Germany and South Korea for keeping their outbreaks under control because social distancing measures were followed – but warned that ‘where they are not, cases go up’.

He added: ‘Covid-19 has changed our world. It has brought people, communities and nations together, and driven them apart.

‘It has shown what humans are capable of – both positively and negatively. We have learned an enormous amount, and we’re still learning.

‘But although our world has changed, the fundamental pillars of the response have not: political leadership, and informing, engaging and listening to communities.

‘And nor have the basic measures needed to suppress transmission and save lives: find, isolate, test and care for cases; and trace and quarantine their contacts.

‘Keep your distance from others, clean your hands, avoid crowded and enclosed areas, and wear a mask where recommended.

‘Where these measures are followed, cases go down. Where they’re not, cases go up.’

Among the places suffering a new wave of coronavirus cases is Hong Kong, with more than 1,000 new infections since early July.

New cases been above 100 for the last five days and the city of 7.5million now has more than 2,700 infections with 20 fatalities, threatening to overwhelm hospitals.

Tough new measures include mandatory masks, a ban on more than two people gathering in public and restaurants only being allowed to serve takeaway meals.

The government has already shut a number of businesses including bars, nightclubs and gyms, and rules have been tightened for freight vessels and air crews.

In Europe, Spain, France and Germany have all seen week-on-week increases in their numbers of new cases. 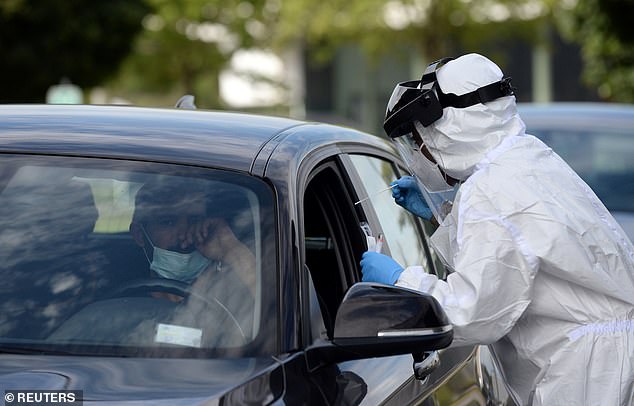 Spain has seen Britain, France and Norway impose new travel restrictions after adding 12,166 new cases to its tally last week, up from 6,347 the week before.

In Germany, which has been widely praised for its handling of the crisis, officials say the rising numbers are ‘very concerning’.

Last Friday’s 815 new cases were the highest since May 15, and the Robert Koch diseases institute (RKI) says cases are growing in several of Germany’s 16 states.

‘A further worsening of the situation must be avoided at all costs. This will only succeed if the entire population continues to be committed,’ the RKI said.

Belgium is also seeing a ‘worrying’ rise, health authorities warned today, with almost half of the new infections recorded around the port city of Antwerp.

There have been 1,952 new cases around Belgium over the past week, up more than 70 per cent on the previous week, officials announced.

‘The rapid growth in the number of cases is worrying,’ said Frederique Jacobs, professor of infectious diseases and a spokeswoman for Belgium’s virus taskforce.

Local measures have been taken to try to contain the spike in Antwerp, but Jacobs warned that ‘the number of infections is also rising considerably in the rest of the country’.

‘Most infections are still coming among the active population, that is to say people aged between 20 and 59,’ Jacobs said.

Belgium was one of the countries with the highest per capita rates of infection at the height of the crisis in Europe.

Tougher rules on wearing masks came into force on Saturday amid growing fears of a second wave of the pandemic.