This is the disastrous moment a huge pool delivery topples over a crane causing carnage in quiet residential area.

The motion pool/hot tub was hauled above the Minnesota home ready to be placed in a hole dug by its owner.

But disaster struck when the next hole was in home owner’s roof.

The 2011 video which has only recently surfaced shows the crane topple over under the weight of the pool stretching across the roof.

The crane came crashing down on to the garage and crushed the chimney as well as wrecking parts of the house.

The homeowner screams ‘Goddammit’ repeatedly in the background and cries out at the wreckage of his house.

The new swimming pool was hoisted above the Minnesota home to be placed in a hole in the backyard, the owner had dug himself

He had dug the hole himself and hired the crane operator to do the last bit.

Afterwards, Peter Krause who was working on the property, said: ‘It sounded like thunder when the thing hit the house knocked out the chimney crushed the garage and busted up the house good.

‘I was filming with my phone and I heard the crane operator scream and I took off running toward the front of the house as soon as he started to yell I knew something went wrong.

‘The operator was shaking in his boots scared the hell out of him not to mention things like this do not happen they have a load chart that prevents things like that.’ 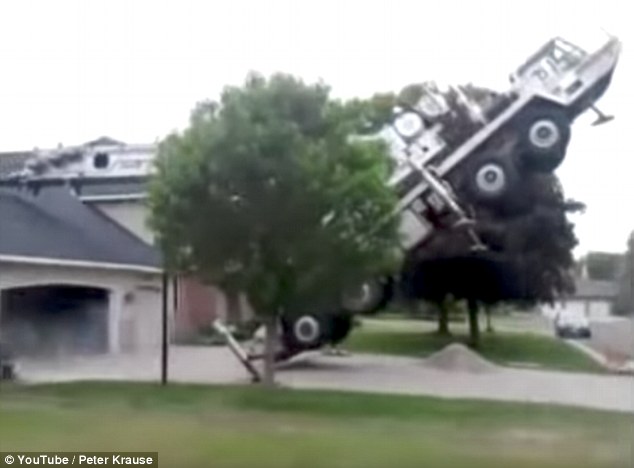