The number of compensation claims lodged against uninsured drivers has risen for the first time in a decade.

The rise was revealed yesterday by the Motor Insurance Bureau (MIB), which compensates victims of uninsured drivers and hit and run accidents.

It fuels fears that spiralling motor insurance premiums, driven by government tax hikes and controversial reforms to serious personal injury compensation, may be putting off more drivers from taking out insurance.

It expects to pay out £256million this year from the fees it collects from insurers. This equates to around £15 added to the cost of the average motor insurance policy.

Seizures of uninsured vehicles are also on the increase, with 145,000 taken off the road in 2016.

Around 58,000 were crushed, or more than 1,000 a week, according to the MIB, which runs the insurance database used by police to check the status of vehicles.

The bureau said it has launched an investigation into why this has happened and has teamed up with the criminology department of the University of Leicester.

Ashton West, chief executive of the MIB, said the latest figures highlight ‘the devastating impact of uninsured driving on communities and families up and down the country’

He added: ’Whilst we recognise there are a number of factors that could be impacting this increase in claims, increasing insurance costs may be tempting people to take the risk of driving without insurance.’

Motor insurance premiums have risen to record levels, with the average premium jumping by 11 per cent to £484 over the last year. 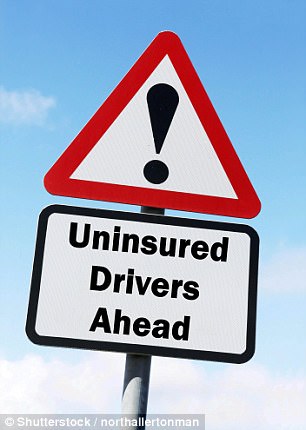 Younger drivers pay almost £1,000 on average, according to the Association of British Insurers.

The steep increase in insurance bills has been driven in part by successive rises in Insurance Premium Tax, which has doubled from 6 per cent to 12 per cent in two years.

Insurers have passed the costs onto customers by hiking their premiums.

Government reforms to the ‘discount rate’ used to calculate compensation for victims of life changing injuries have also pushed up pay-outs, and caused insurers to increase premiums.

Earlier this month car insurer Admiral said this would cost the average motorist up to £60 more a year – with young drivers facing a £250 increase.

The government is now consulting on the controversial reforms and has come under fierce pressure from the insurance industry to reverse the changes.

Steve Gooding, director of the RAC Foundation, said: ‘The fear is that this surge is an unintended consequence of recent sharp rises in insurance premium tax which have resulted in big increases in premiums for all motorists, especially the young.

‘If more drivers are trying to dodge soaring costs by not taking out any insurance at all then law-abiding road users will be left to pick up the bill as they see the price of their own policies go up further still.’

But there are no figures indicating whether the number of uninsured drivers has gone up or down last year.

The MIB said another potential cause of the rise in claims against uninsured drivers could be the influence of aggressive personal injury claims firms, which encourage victims of motor accidents to pursue compensation.