Credit card holders paid the price for using their plastic for cash transactions last year, as they were collectively stung with £219million in fees and charges.

Around 36million credit card cash transactions were made between December 2017 and November 2018, research from personal finance website Moneycomms shows.

It appears many credit card holders are unaware of potential charges on ATM withdrawals, purchases of foreign currencies or gambling on plastic.

Altogether, £4.6billion was spent in cash advance transactions last year, with the average amount withdrawn or spent using a credit card sitting at £125.

Cash machine: Credit card providers made £219m in fees and interest from credit card users who made cash advance transactions – some cards charge over £6 for withdrawing £125

While failing to pay your balance in full is the best-known way of incurring interest and charges on your card balance, withdrawing cash will expose you to sneaky charges you might not otherwise know about.

Using a credit card at a cash machine, for example, is usually a costly move. They often charge both a withdrawal fee and a higher interest rate for cash advance payments.

What’s more, the average withdrawal fee is £3.88, but both Creation’s All Rounded Credit Card and Virgin Money’s All Round Credit Card charge either £5 or 5 per cent for withdrawing cash.

Withdrawing £125 with either of those would land you with a whopping £6.25 charge.

According to UK Finance, there are 34million active credit cards, which are cards with an outstanding balance, meaning each card potentially incurred £6.44 in fees and interest between December 2017 and November 2018.

The £219million figure came from multiplying the average withdrawal fee cost of £3.88 by the 36,112,000 cash transactions that took place, and adding that to an interest rate charge of 22.5 per cent over 28 days on £4.558billion of spending. 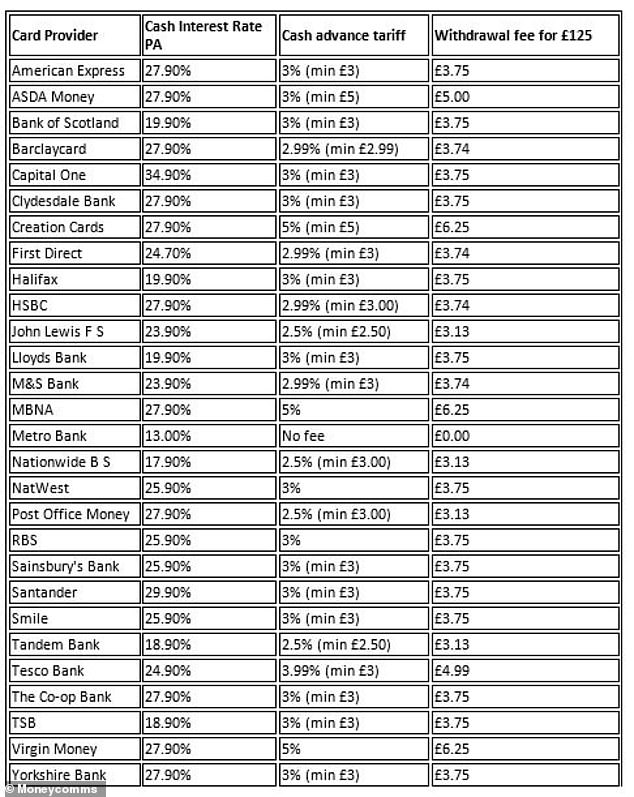 Moneycomms calculated the interest rates and withdrawal fees for each major UK credit card provider – working out the average interest rate was 22.5% and the fee £3.88

Alastair Douglas, chief executive of credit comparison site TotallyMoney which helped with the research, said: ‘Credit cards are a vital part of our financial armoury.

‘They give us flexibility and financial backup for covering emergencies and unexpected costs.

‘Many consumers are also unaware that interest on cash transactions is charged at a higher rate compared to credit card purchases.

‘What’s more, that interest will apply the moment the cash transaction takes place.

‘It’s not just ATM withdrawals. It can be gambling transactions and foreign currency purchases too.’ 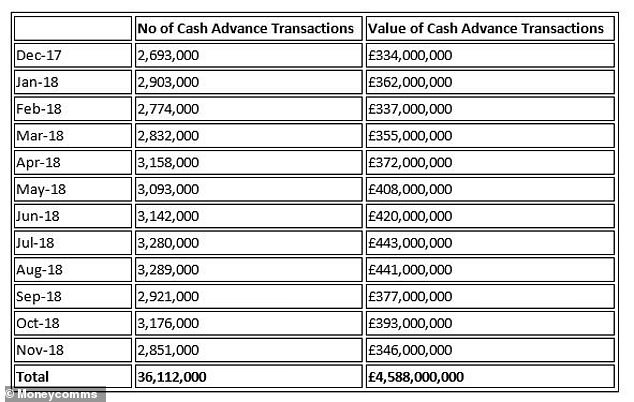 UK credit cardholders made 36m cash advance transactions – which include cash withdrawals and gambling – last year, worth nearly £4.6bn. This led to them incurring £219m in charges

Andrew Hagger, from Moneycomms, added: ‘If you withdraw cash on your credit card, it will show up your credit record and could be a danger sign to other lenders that may look at your record in the future.

‘Prospective lenders may think you’re making cash withdrawals on your plastic because you have no money left in your current account.

‘Paying over £6 to withdraw £125 is a high price to pay. Unfortunately too many people are oblivious to the damage a credit card ATM withdrawal does to both their wallet and their credit record.’