Christopher Pitt, 35, was jailed for five years in Manchester on Monday

A cuckolded husband who kidnapped his unfaithful wife at knifepoint so he could carry out a ‘Shining-style’ axe attack upon the home of her lover was jailed on Monday.

Christopher Pitt, 35, thought his wife Caroline, 41, had called off her affair with security guard David Rees, 38, but was left furious when he discovered they were still secretly seeing each other.

Following a night out with friends, the father-of-two attacked his wife and forced her to drive him to Mr Rees’ home in Stalybridge, Manchester, last September.

On arrival Pitt took an axe from the vehicle and in a scene echoing the 1980 Jack Nicholson horror movie, he smashed a hole in Mr Rees’ front door before shouting ‘I’m going to kill you’ through the gap.

Mr Rees managed to ward off the frenzied attack by grabbing hold of the axe and pushing Pitt away.

Police arrived at the scene to find Pitt grabbing a knife from his wife’s car in preparation for another assault.

Mr Rees is thought to have escaped injury but Mrs Pitt was taken to hospital from a kick to the back of her head by Pitt.

Pitt was jailed for five years after he admitted kidnap, assault, possession of bladed article, damage to property and aggravated burglary at Minshull Street Crown Court in Manchester. 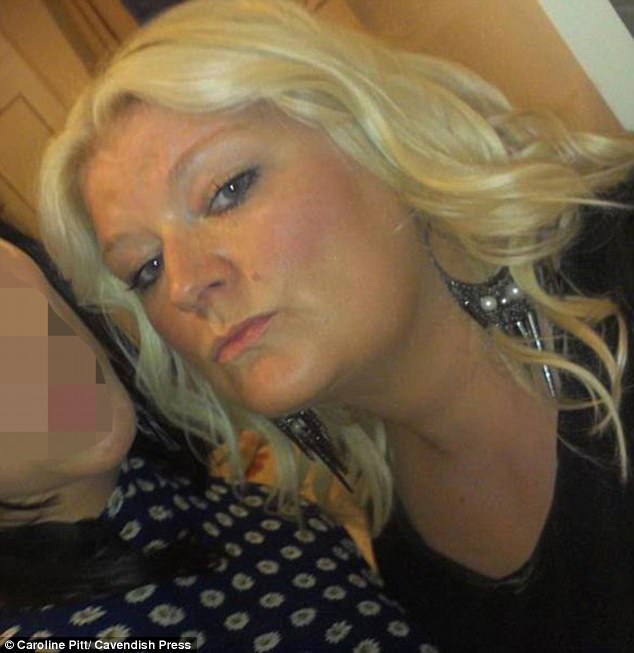 Pitt flew into a rage after he discovered his wife Caroline (pictured) was still having an affair with security guard David Rees. He had thought the two had called off their romance

Mr Rees told police: ‘I was seeing Caroline when Christopher came round to my house with an axe. This whole incident has had a huge effect on me and the way I live my life.

‘The incident cost me £480 in damage to the property, which is a month’s rent. I really didn’t want to stay at the property at the time so [I] went and stayed in a hotel for two weeks, which cost me even more money.

‘I no longer feel like this is my home and I am in the process of looking for somewhere else to live. I have not let my children visit since the attack. I don’t like having anyone round the house at night anymore.

‘I work in security and always thought I would be able to deal with this sort of situation but it has affected me more than I realised. I am now much more distrusting of people and situations and I blame this wholly on what happened.’

The court heard Pitt and his wife, who worked at gay bar Twinkle in Stalybridge, had been in a relationship for 15 years and married in 2015.

But prosecutor Miss Rosalind Scott-Bell said: ‘In mid 2016 she met a man called David Rees who she started seeing behind the defendant’s back.

‘On September 2 last year she went to work at Twinkle bar and the defendant attended and had a few drinks. He was not engaging and was just staring at his wife.’ 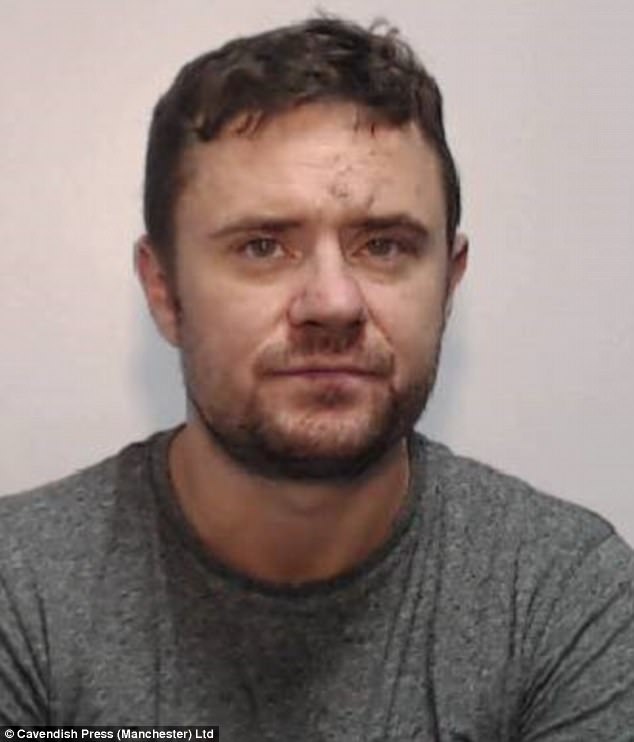 Pitt, a father-of-two, kidnapped his wife at knifepoint in September of last year. He made her  drive him to Mr Rees’ home in Stalybridge, Manchester 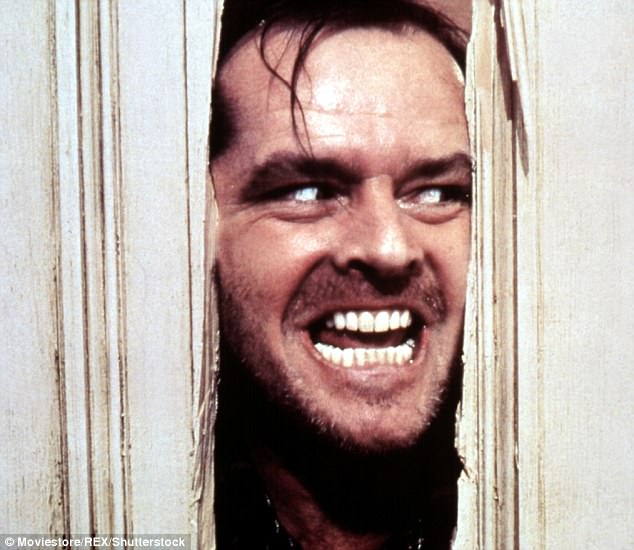 On arrival to Mr Rees’ home, Pitt took an axe from the vehicle and in a scene echoing the 1980 Jack Nicholson horror movie The Shining (pictured), he smashed a hole in Mr Rees’ front door before shouting ‘I’m going to kill you’ through the gap

The prosecutor continued: ‘At the end of her shift they went to a few other bars with friends – but the defendant didn’t speak to his wife.

‘At 6am when they were alone the defendant started calling her a ‘s**g and fat b***h’ and grabbed her neck and face and kicked her to the back of the head.

‘He then pulled out a knife from his sock and held it to her throat saying: ”Take me to his house now or I will stab you.”

‘She was terrified and got into her car and was forced to collect the defendant. He got into the front passenger seat with the knife and kicked the windscreen so hard it smashed.

‘He also stabbed the dashboard with the knife so hard that the knife bent. He ordered her to drive to Mr Rees’ house.

‘She drove and was then ordered to go a garage and buy the defendant cigarettes. As soon as she got out of the car she dialled 999 and gave a location description.

‘But the defendant took her back to the car and told her to drive home.

‘He bit her ear and was still very angry and she was petrified. He returned to the car with a different knife and an axe and ordered her to drive to Mr Rees’ house.’ 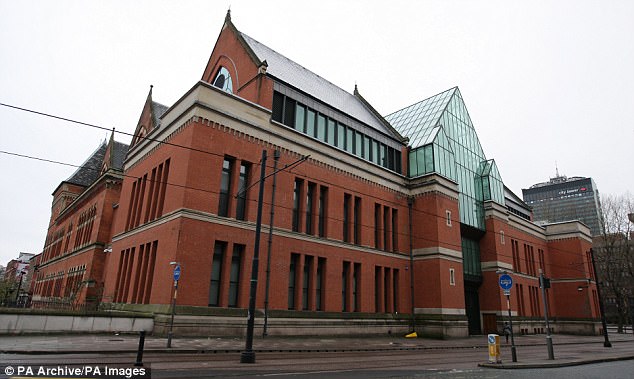 Pitt was jailed after he admitted kidnap, assault, possession of bladed article, damage to property and aggravated burglary at Minshull Street Crown Court in Manchester (pictured)

Miss Scott-Bell continued: ‘At 7.45am they arrived at Mr Rees’ house and the defendant hammered on the door swinging the axe and smashed the window of the door.

‘He also smashed a neighbour’s window. That neighbour came out and took Mrs Pitt into her house.’

‘Mr Rees came down and saw someone trying to get into his house. He went back into the kitchen and grabbed a knife. The defendant was shouting that he was going to kill him.

‘Mr Rees managed to grab the defendant’s arm and prevented him from entering the house.

‘The defendant only went as far as his car to grab the knife and returned back to the house trying to stab him.

‘Police arrived and Mrs Pitt was taken by ambulance to hospital. The defendant was apprehended nearby.’

In mitigation defence counsel Miss Sarah Haque said: ‘This situation was unique and isolated as to how it occurred and this very much was a man who had been pushed to the brink by his wife’s infidelity.

‘There was in this case the added difficulty that he had already discovered the affair and already had on a previous occasion spoken to them both and thought it was over.’ 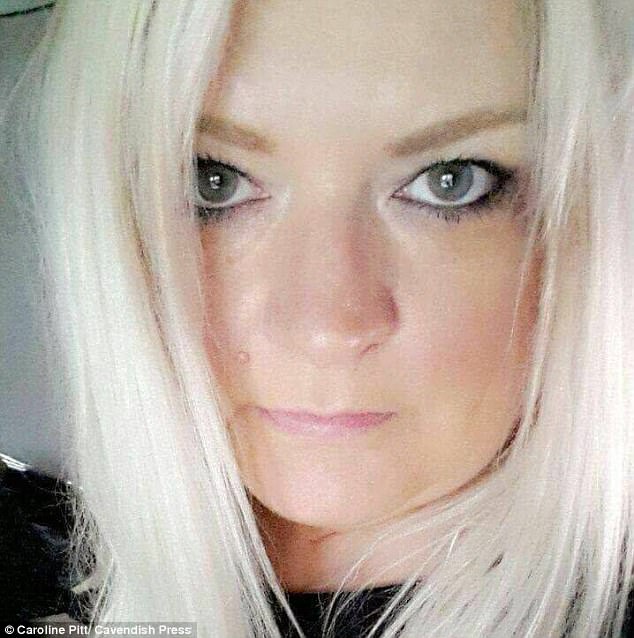 Pitt’s defence counsel Miss Sarah Haque said: ‘This situation was unique and isolated as to how it occurred and this very much was a man who had been pushed to the brink by his wife’s infidelity’

She continued: ‘He is deeply remorseful and ashamed of his behaviour. Whilst he had some trouble in the past he clearly had settled down and for a significant period had not been before the court in over 10 years.

‘He was a working family man, undertaking the main task of bringing up his and his wife’s three year-old son. This behaviour is not a reflection of the man sat in court today.’

But the judge Mr Recorder Anthony O’Donohoe told Pitt: ‘Whilst I accept the reasoning of the offence was the discovery of your wife’s infidelity, I wish to make it clear that in no way shape or form justifies your actions that morning.

‘Only an immediate custodial sentence can apply. I accept that this was a rather unusual set of circumstances but the fact they were committed as part of domestic violence in no way justifies it.

‘It is clear that your wife felt compelled by you to return with you let you into the car where you were violent and uncontrollable. It must have been extremely frightening for her.’

Pitt was also made subject to a five-year restraining order not to contact directly or indirectly Mr Rees.