Here is the despicable moment a group of young thugs turn on a passing cyclist, viciously chasing him down a bike trail while throwing a weapon at him.

The incident took place around 2pm on Saturday on the Fallowfield Loop bike path in Gorton, Manchester.

The off-road cycle path and adjacent Yellow Brick Road pathway has become notorious for crimes against bikers with 21 attacked in the last Autumn, according to figures from Walk Ride Greater Manchester.

The four hooded men, with their faces hidden, can be seen spinning around to ambush the cyclist from behind after he passes the group.

The footage was captured by a camera cleverly mounted on the cyclists bike.

Peddling down the path at full speed the cyclist eventually out paces the thugs pursuing him on foot.

The cyclist, who wishes to remain anonymous, told the Manchester Evening News: ‘When I was cycling back I got through the cycling gates. I saw four lads up ahead.

‘I thought ‘Right something is going to happen. I am just going to have to go through it, I am not going to give up that easily’. 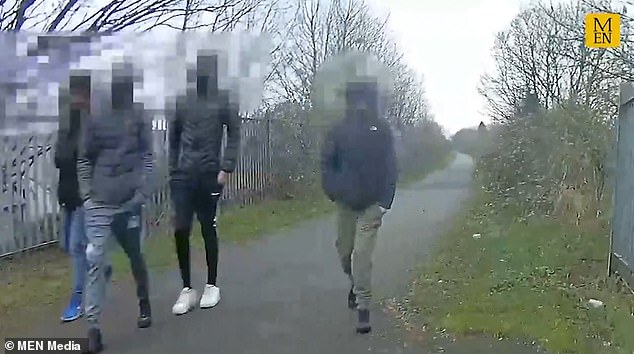 Checking out their prey: The young men take a look at the cyclist passing by but do not immediately attack. The incident took place where the Fallowfield Loop meets Hyde Road, in Gorton, south east Manchester

‘I went towards them. There was a gap on the road. They were chasing me as well. I was conscious they were throwing something at me.

‘I thought it was a stick, it was thrown by the one wearing a grey tracksuit. After looking at the pictures it looks like a hammer or a small axe.

‘I am fortunate I managed to get away. They expected me to stop and I didn’t.’

He added: ‘The worst part of it was the lack of support from the police, I have had to beg them to do anything.

‘I told them I have got video. I made a complaint against the lack of investigation. I spent hours on the phone to police officers and inspectors.

‘They eventually sent some neighbourhood police, they said the video evidence was really good. 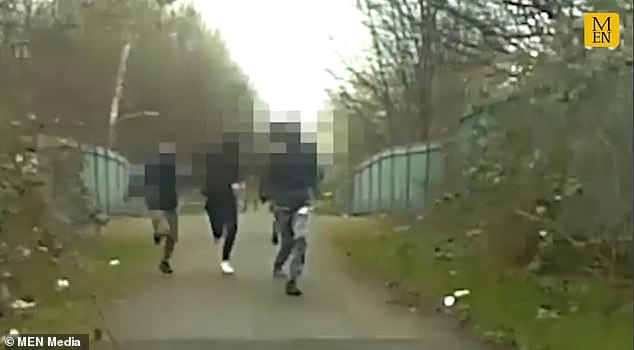 It is only seconds after the cyclist has passed that the thugs begin their ambush from behind, chasing after the bike and pelting a weapon in an attempt to hit the victim

‘I could be in the hospital now. I am quite resilient in lots ways. It is not the first time I have been faced with that.

‘I won’t be cycling on Fallowfield Loop again by myself.

‘I can’t justify that for going there. I would go with other people, but I would have to consider my son and my wife and their own safety.’ 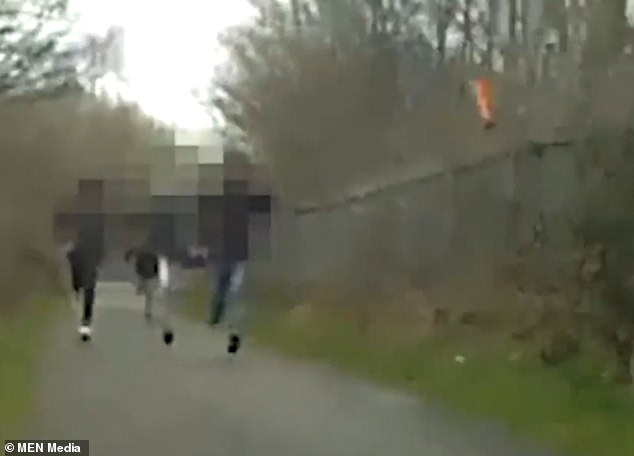 Four teenagers, nicknamed the ‘yellow brick road gang’ by locals, were arrested for attacks on cyclists before Christmas and are currently on bail.

Adding: ‘It’s possible that that team is responsible for in excess of 20 separate offences in and around the Yellow Brick Road.’

In addition to deploying plain clothes police officers in the area, Greater Manchester Police also flew a drone over the eight mile stretch to collect intelligence and deter criminals.

Chief Inspector Marc Hargreaves of Greater Manchester Police told M.E.N: ‘We always strive to deliver the best possible service working to a graded response system assessing incidents and deploying staff and resources according to the level of threat, risk and harm.

‘I have no doubt that this incident was upsetting for the victim, and has obviously caused the victim considerable stress.

‘Support for the victim will continue with further follow up from the local neighbourhood team.’