A D-Day veteran has revealed he was told about the end of the Second World War in Europe 48 hours before the rest of the world – and has the original letter to prove it.

Bernard Morgan, 95, received a telex in 1945 announcing the end of armed conflict in Europe while working as a code breaker for the RAF in Schneverdingen, Germany.

The veteran from Crewe, Cheshire, spent more than 50 years keeping quiet about the secret missive, which he believes is one of the only of its kind still in existence.

Bernard Morgan, 95, holds the original copy of the telex announcing the end of the war

Despite museums clamouring to get their hands on the telex, he has no plans to give it up 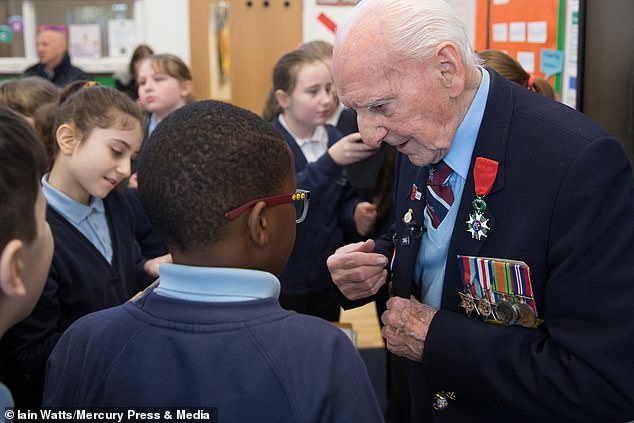 Mr Morgan, the youngest RAF sergeant to land in Normandy, has refused to give museums the original – but is now sharing his story with children to preserve it.

The retired clerical officer, who turns 96 next week, said: ‘I was stationed in Schneverdingen in Germany when I got the telex to let me know that the war was ending and that the German surrender was imminent.

Mr Morgan in his uniform during the war. As a 20-year-old code and cipher operator, Mr Morgan landed on Gold Beach on D-Day

‘I received it from ground control and the message read: ‘Secret. The German war is now over.’ I had to sign the official secrets act as part of my training, so I never told anyone about it. For two days, I kept quiet about the information.

‘We code breakers never sat with the other officers at dinner, so I was used to keeping quiet. When VE Day came two days later there was a big celebration.

‘There was lots of alcohol and a big bonfire. There were other telexes that airmen took at the time, but I don’t know of any others in museums today.

‘I had to sign the official secrets act, which forbid me to speak about my time in the war, so couldn’t tell anybody about knowing in advance for 50 years. You were bound to keep quiet for that long because they thought you would be dead by then.’

Telex was an international system used in the past for sending written messages via a linked network of teleprinting machines. The message Mr Morgan received in May 1945 read: ‘German war now over, surrender effective sometime tomorrow’.

But despite museums clamouring to get their hands on the telex, Mr Morgan, originally from Longsight, Manchester, has no plans to give it up anytime soon. 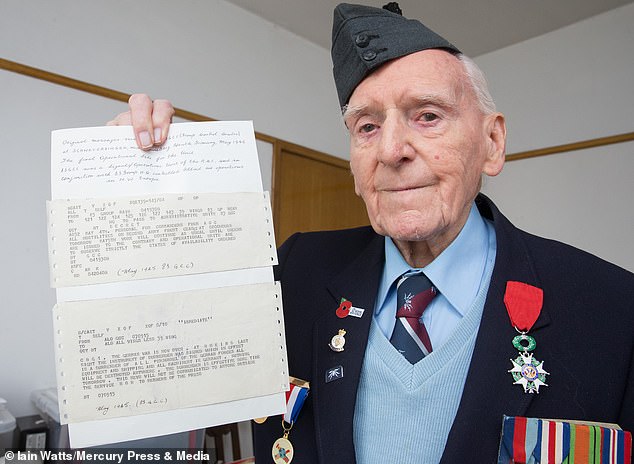 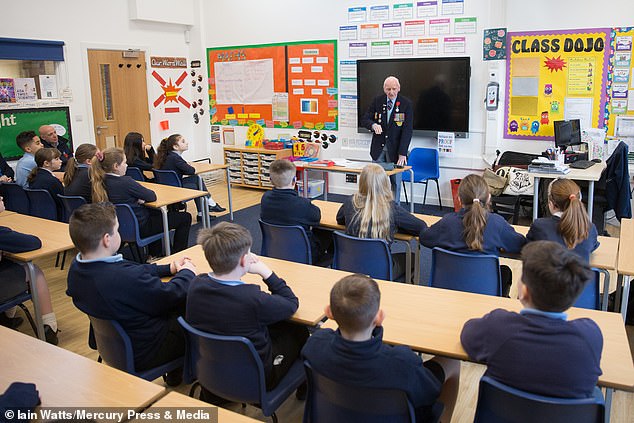 He said: ‘I offered a copy of the telex to the Imperial War Museum in London – they wanted the original, but I’m not giving them it. I want it for my family to keep.’ 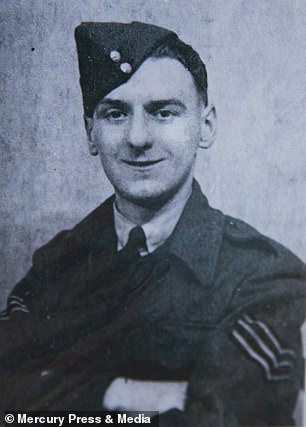 D-Day veteran Mr Morgan, who now lives in Crewe, pictured in his uniform during the war

As a 20-year-old code and cipher operator, Mr Morgan landed on Gold Beach on D-Day.

The equipment he was using was so sensitive that he could not risk it being captured by the enemy and he was frightened when he went ashore, having heard and seen the gunfire from the beaches overnight.

After the war in Europe finished, Mr Morgan, then 21 and an RAF sergeant at the time, was posted to Japan, but never arrived after the war ended in August 1945 before his ship arrived.

Instead, he ended up stranded in Mumbai for 14 months, where he contracted diphtheria and spent three months in hospital, losing seven stone.

Upon arriving back in Britain, Mr Morgan resumed his job as a clerical officer for the London, Midland and Scottish Railway company, where he worked for over 40 years. 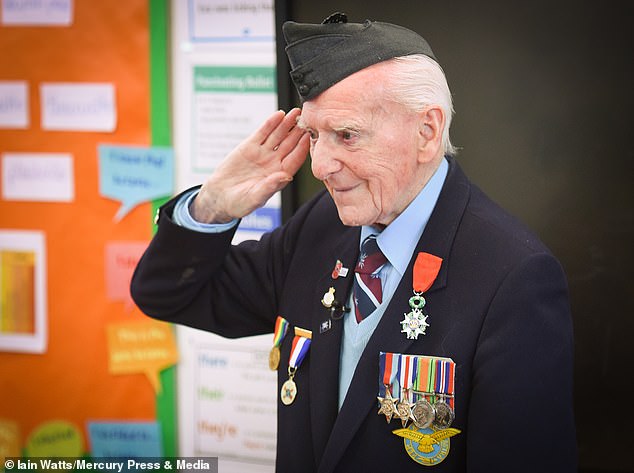 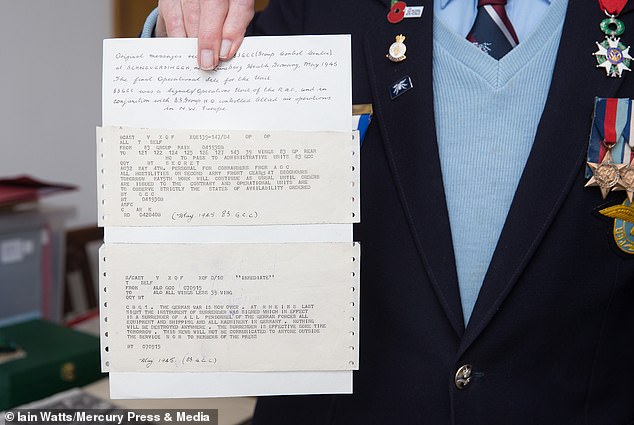 Manchester-born Mr Morgan also worked as a turnstile attendant at Crewe Alexandra football club at the weekends for 57 years, despite being a Manchester City fan.

He married his wife Brenda in 1950, with whom he had one daughter, Sheila, who is now 67. Brenda died in 2001, but Mr Morgan now also has two grandchildren and one great granddaughter.

Now he is able to speak publicly about his time in the RAF, Mr Morgan is able to recall the period accurately thanks to illicit diaries he kept during the war.

He said: ‘I kept a diary throughout the war even though it was a court marshall offence to keep one. If you were caught, you were court marshalled but you were only sent back to the UK to serve your time, so we didn’t care. 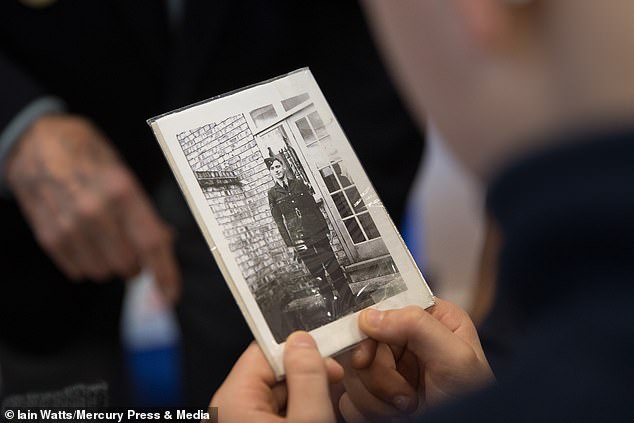 A photo of Mr Morgan in his uniform during the war, which saw him work as a code breaker 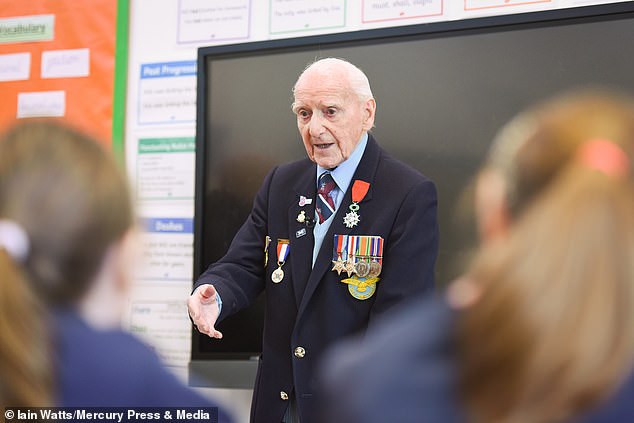 ‘Even the officers kept diaries. Nobody was worried about being caught.’

Bernard, who was also a talented sportsman who just missed out on qualifying for the 1,500m at the 1948 London Olympics, shared his fascinating story with schoolchildren in Crewe yesterday.

The visit to Hungerford Primary Academy to speak to Year Six pupils was organised to raise awareness of the 75th anniversary of VE Day later this year.

Second World War veterans who are interested in attending the 75th anniversary events can and apply for places by clicking here for VE Day or here for VJ Day.