Brooklyn District Attorney Eric Gonzalez on Tuesday dropped all charges against Jazmine Headley, 23, who was seen in a viral video having her son yanked form her arms by police

A mother who was arrested after police violently yanked her toddler son from her arms during a disturbance at a Brooklyn social services office that was caught on video had all charges against her dismissed.

Brooklyn District Attorney Eric Gonzalez said Tuesday that in deciding to drop the case against Jazmine Headley, he was acting ‘in the interest of justice.’

Headley, 23, has been in the Rikers Island jail since Friday on charges including obstructing governmental administration, resisting arrest, endangering the welfare of a child and trespassing, stemming from her altercation with a guard in a crowded waiting room of a food assistance office.

‘Like everyone who watched the arrest of Jazmine Headley, I was horrified by the violence depicted in the video,’ Gonzalez said in his statement. ‘It is clear to me that this incident should have been handled diffidently.’ 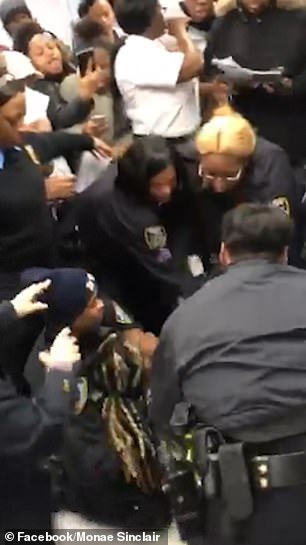 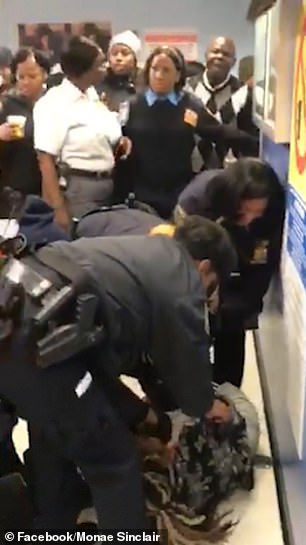 The video shows Headley on the floor at a SNAP center in Boerum Hill, New York

Gonzalez pointed a finger of blame at the guard, accusing him of escalating the situation as Headley was getting ready to leave with her 18-month-old child, and a result ‘creating an awful scenario of a baby being torn from is mother.’

Brooklyn’s chief prosecutor went on to say that pursuing this case ‘will not serve any purpose.’

It was unclear when Headley might be released from jail. She remained held Tuesday on an unrelated warrant issued in New Jersey, where the woman faces charges of credit card theft.

Her Headley’s lawyer, Brooklyn Defender Services founder and director Lisa Schreibersdorf, said her client did not steal the cards, but was in a car with a man who committed the theft.

The video of Headley’s arrest, posted to social media by an onlooker, caused a furor, spurring outrage from those who say it’s indicative of how low-income social service recipients are treated. 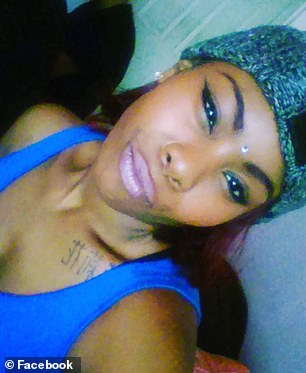 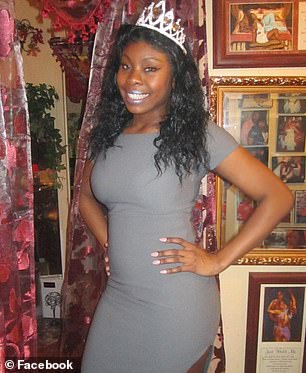 It showed Headley ending up lying face-up on the floor, and a police officer at another point pulling her stun gun out and aiming it at the upset crowd.

Officials said the situation is being reviewed by the New York Police Department and the Department of Social Services. Two city employees at the Boereum Hill SNAP center have been placed on modified duty in connection to the incident.

‘The consequences this young and desperate mother has already suffered as a result of this arrest far outweigh any conduct that may have led to it: she and her baby have been traumatized, she was jailed on an unrelated warrant and may face additional collateral consequences,’ Gonzalez said of the case on Tuesday.

At one point in the struggle seen in the now-viral video, in order to arrest Headley, officers tried to yank her son out of her arms as she cried: ‘They’re hurting my son… I’m begging you please.’

One officer pulled out a stun gun as an onlooker shouted: ‘There’s a f***ing baby in her hands!’

Headley’s mother, Jacqueline Jenkins, said her daughter, who is a cleaner, was at the center to collect daycare vouchers for a nanny who looks after her son, Damone. 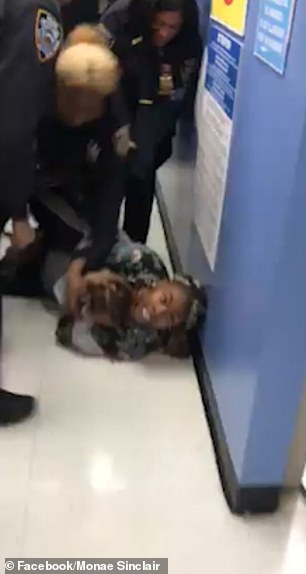 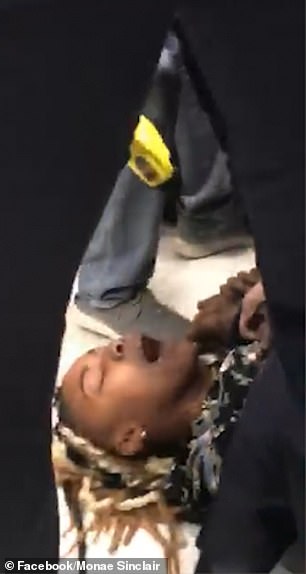 At one point in the struggle they tried to take her one-year-old out of her arms as the woman cried: ‘I’m begging you please.’

She said Headley sat on floor because there were no chairs available and that a security guard called police after she refused to stand up.

‘I can’t believe the NYPD, how they handled it, the force of what they did to grab my grandson like that,’ Jenkins, who is currently caring for her grandson, told NBC New York. ‘He was like a rag doll.’

The video was posted to Facebook where it sparked outrage from viewers.

The woman who uploaded it wrote:  ‘[The mom] made the security guard feel dumb so she called the cops on her and this was the outcome.

‘She had her baby in her hands the whole time. I’m so f***ing disgusted with the NYPD.’

He tweeted: ‘I’d like to understand what transpired and how these officers or the NYPD justifies this. It’s hard to watch this video.’

State Attorney General-elect Letitia James, released a statement saying: ‘No mother should have to experience the trauma and humiliation we all witnessed in this video.’

She added: ‘Being poor is not a crime. The actions of the NYPD in this video are appalling and contemptible.

‘A full investigation must be conducted immediately, and the results should be made public so there is a transparent accounting of how this horrific situation occurred.

‘All involved officers, including the assigned supervisor, should be assigned desk duty pending the investigation results.’