Dallas realtor, 36, who suffered brain damage after a botched cut-rate nose job in Mexico is dead

A Dallas, Texas real estate agent who suffered severe brain damage after she jet-setted off to Mexico for a cut-rate nose job that went horribly awry has died.

Laura Avila, 36, was moved to a hospice last week after her family consulted doctors.

Avila was put on life support after having the rhinoplasty procedure, but on the advice of medical experts she was transferred to palliative care last Friday.

‘My angelic sister/second mom/best friend & Heartbeat left us today around 8:20AM,’ Laura’s sister, Angie Avila, wrote on her Facebook page on Saturday.

‘My heart aches, and I truly don’t know how or if I’ll ever overcome this pain.

Dallas real estate agent and engaged to be married Laura Avila, 36, (pictured) has died a week after she was moved to hospice care 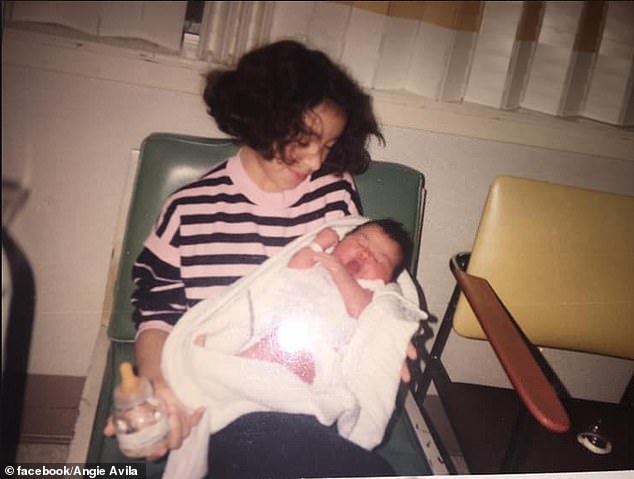 ‘My angelic sister/second mom/best friend & Heartbeat left us today around 8:20AM,’ Laura’s sister, Angie Avila, wrote on her Facebook page on Saturday. The undated image above shows Angie Avila (left) with her baby sister Laura 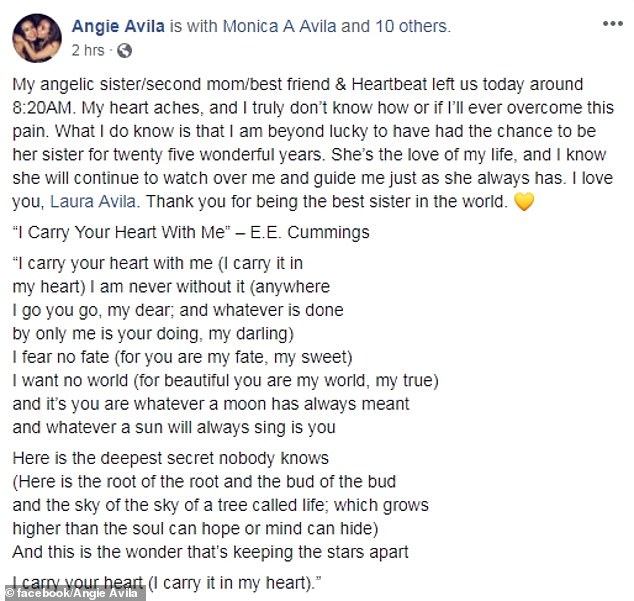 ‘My heart aches, and I truly don’t know how or if I’ll ever overcome this pain,’ Angie Avila wrote on her Facebook page

‘What I do know is that I am beyond lucky to have had the chance to be her sister for twenty five wonderful years.

‘She’s the love of my life, and I know she will continue to watch over me and guide me just as she always has. I love you, Laura Avila.

‘Thank you for being the best sister in the world.’

‘Based on the recommendation of Laura’s physicians, and after hours of agony and consideration, our family moved Laura to a more comfortable facility late last night,’ sister Angie Avila wrote on her GoFundMe page.

‘Laura is peacefully resting and her fate is in the hands of God.’ 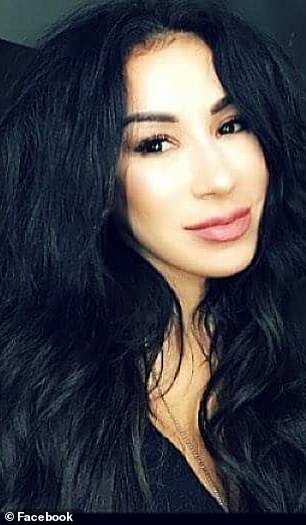 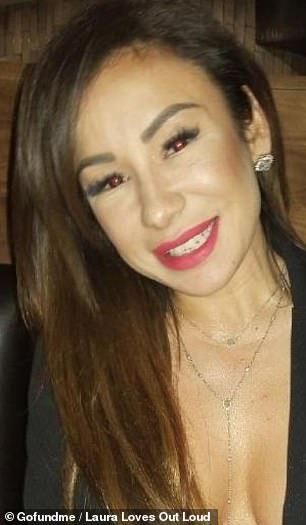 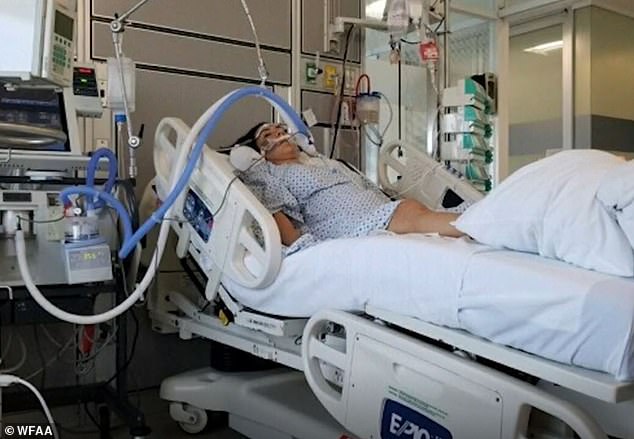 Avila, who was brain damaged, is pictured above in her hospital bed last week. She jet-setted to Mexico for a cut-rate nose job in October

While the crowdfunding page has raised approximately $80,000 of a $150,000 goal so far, Laura’s relatives asked those wishing her well to give them space at this difficult time.

‘Visitation is limited to immediate family and very close friends. We appreciate your understanding and respect towards our wishes,’ the post continued.

‘Thank you for keeping Laura in your prayers and for all of your continued love & support.’

Her family had previously been deciding whether to move forward with two high-risk surgeries or strip her from life support.

They hired an attorney, Larry Friedman, who plans to sue the Rino Center in Juarez, Mexico and those responsible.

The cost of Laura’s procedure on October 30 was estimated to be less than a third of the average U.S. cost.

The average price of a rhinoplasty in the US is $7,500, according to RealSelf. 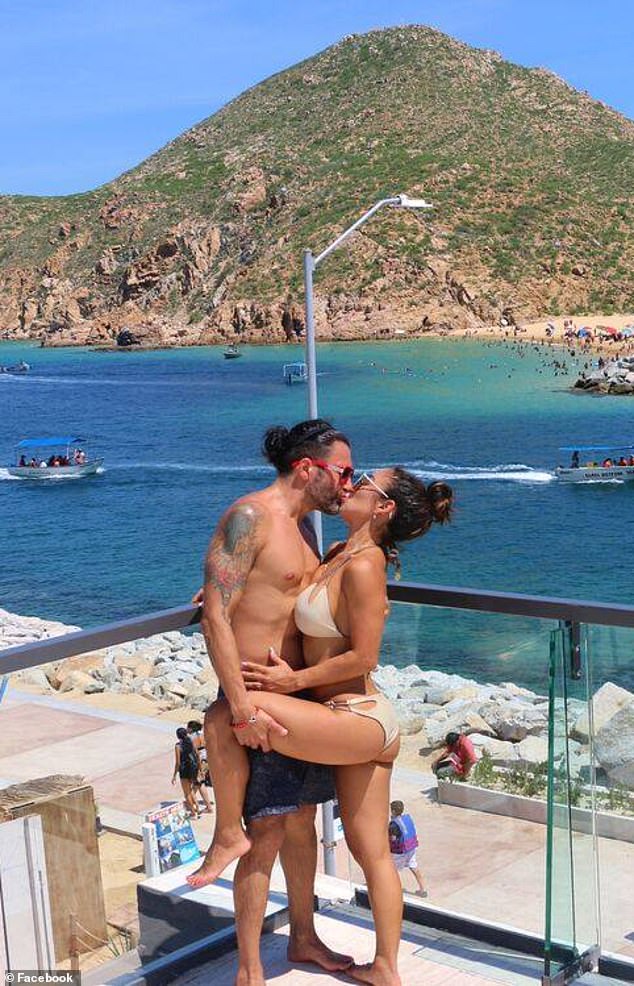 Avila’s supportive fiancé, Enrique Cruz, traveled with her for the operation October 30 at the Rino Center in Juarez. The happy couple are pictured in a loved-up Facebook photo 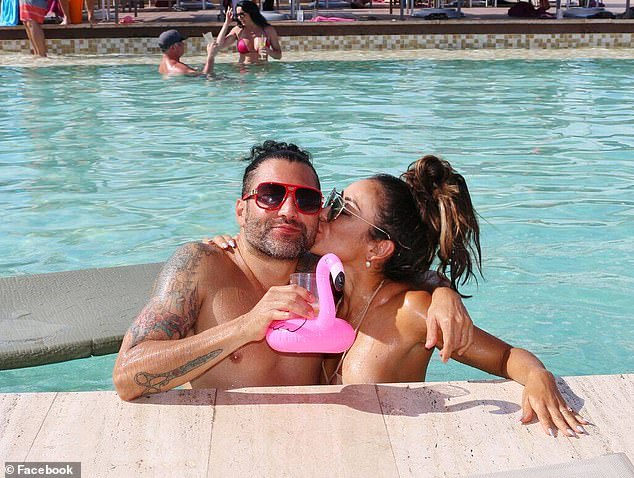 The appointment started off a nightmare when Avila was administered anesthesia via her spine. The anesthesia traveled to her brain instead of down her body 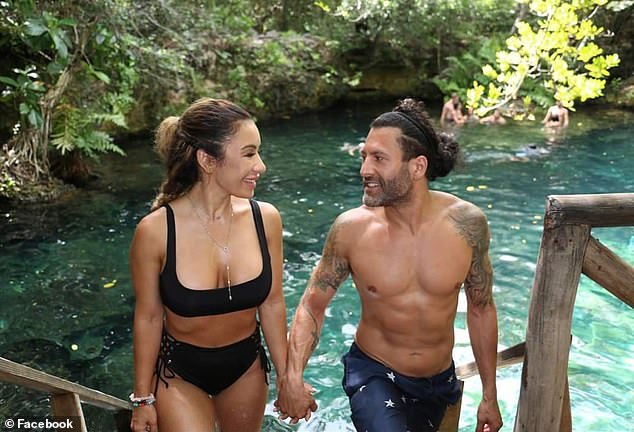 Avila’s supportive fiancé, Enrique Cruz, traveled along with her for the operation and was by her side before it began.

The anticipated appointment, however, was a nightmare from the start when Avila was administered anesthesia via her spine.

The anesthesia traveled to her brain, instead of downward throughout her body.

Within moments, she went into cardiac arrest and hospital officials were forced to place her into a medically induced coma to prevent further brain damage. Her fiancé was not informed about the severity of the situation at the time.

A distraught Cruz told WFAA: ‘I was really concerned… I got upset because they wouldn’t let me see her.’

He said doctors initially told him her blood pressure dropped, and that they could not move forward with the surgery.

The real estate agent, who was also a singer and dancer, was under care at the Mexico clinic for four days before she was finally transported to a university hospital in El Paso, Texas.

Avila had been refused care by three Dallas hospitals because she is not insured. 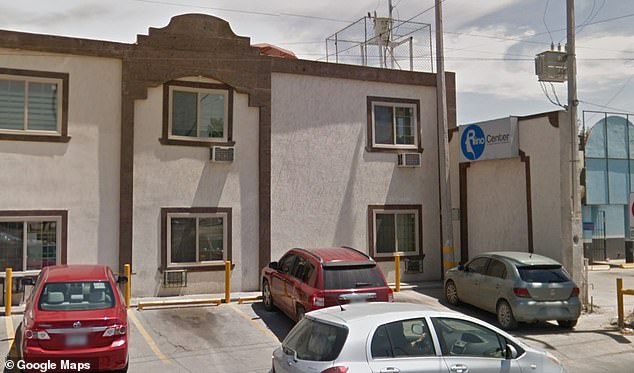 The Rino Center in Juarez, Mexico is pictured above in a Google Maps image 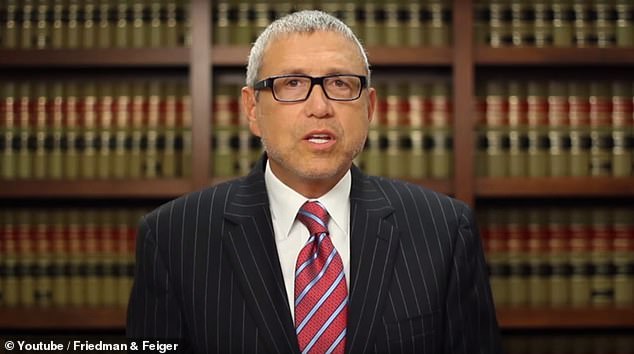 Attorney, Larry Friedman, plans to sue the Rino Center in Juarez, Mexico and those responsible

Her family said officials at the Rino Center gave them a hard time about leaving because they did not pay the bill.

Avila’s sister told WFAA: ‘The hospital in Mexico basically held us hostage because we wouldn’t pay the full amount.’

When Avila and her worried loves ones finally arrived to the Texas hospital, doctors confirmed she was brain dead.

Angie told the station the damage is so horrific that ‘she will never be our Laura again’.

Cruz, who has been in a relationship with Avila for 10 years, told ABC 7: ‘We got married by God… no matter what happens, I want her to know [she] has a special place in my heart.’

He also captioned a Facebook profile photo of the two in happier times: ‘I love you so much, I’m so lost with out you.’ 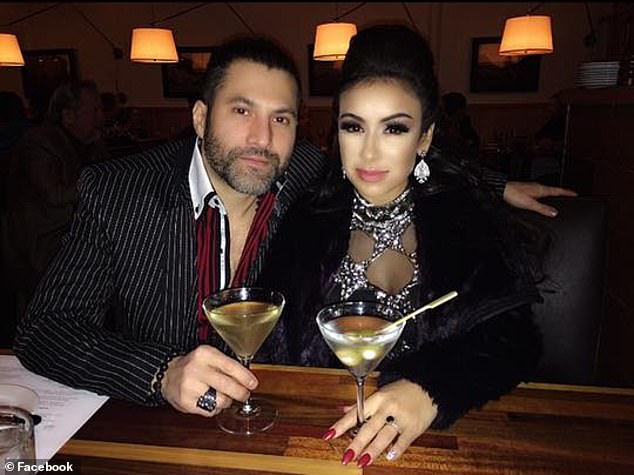 A distraught Cruz (pictured left with Avila) recalled from the nightmare day: ‘I was really concerned… I got upset because they wouldn’t let me see her’ 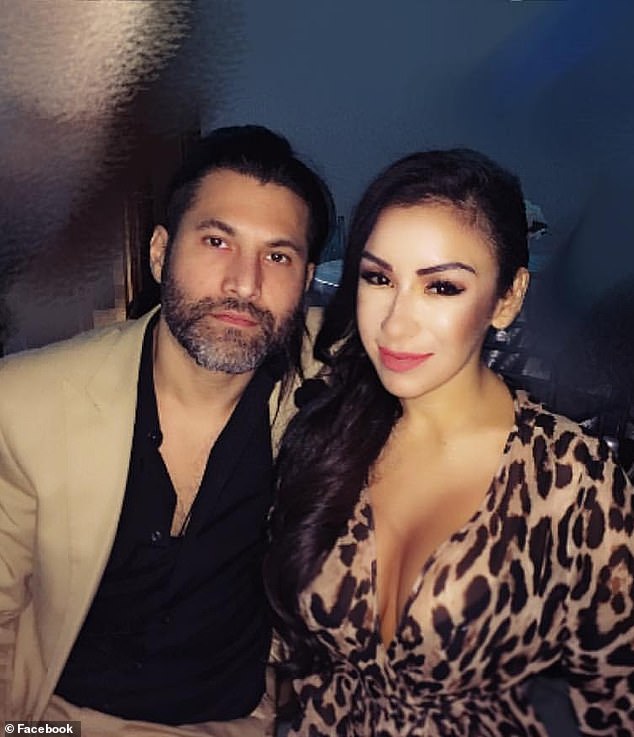 When Avila and her loves ones finally arrived to the Texas hospital, doctors confirmed she was brain dead 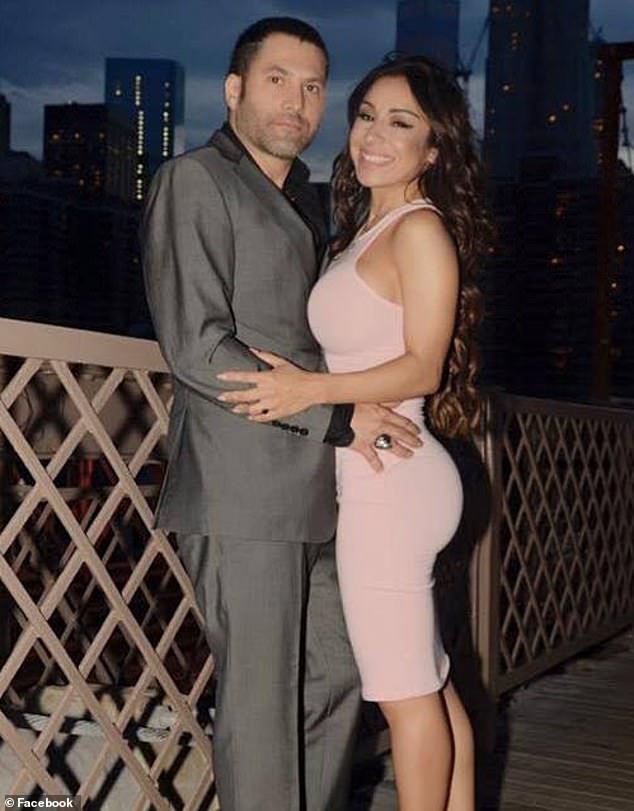 The crowdfunding page posted Sunday: ‘Any assistance you provide will go to her medical bills, which have quickly accrued in the last six days. Approximately $25,000 was incurred in Juarez plus transferring costs which are yet to be determined.

‘In El Paso, the costs began accumulating from the minute EMS picked her up at the border. She does not have medical insurance, so everything will come out of pocket.

‘Any remaining funds will go to our parents who have missed work to be with Laura; her fiancé Cruz who is also missing days at work and buying plane tickets to fly back and forth between El Paso and Dallas, TX, where he resides; and myself, a current law student at SMU, for flight expenses from traveling between Dallas and El Paso to go to school and also be with Laura and ensure her legal case proceeds in Mexico.’