Dame Mary Berry lets me in on a culinary family secret: her husband Paul likes nothing better than a breakfast fry-up for his evening meal.

So your cookery skills are rather wasted on him? ‘Well yes,’ she laughs merrily. ‘And he always tells the truth about my cooking. If the sauce is white, I know he’s not going to like it.’

Dame Mary, 87, has been married to Paul Hunnings, 90, a retired antiquarian bookseller who also worked in the wine trade, for 56 years. And while she’s still working at a prodigious pace, her husband’s life is rather more leisurely.

Dame Mary Berry, 87, has been married to Paul Hunnings, 90, for 56 years. The author describes her marriage saying that she is happier now than ever

As the author of more than 80 cookery books – there’s a selection of visually stunning and mouth-watering recipes from the latest, Cook And Share, in Weekend today – she is our best-loved, and probably most prolific, food writer.

Imparting her own love for cooking, and sharing her knowledge of it – with friends and family – remain her abiding passions. She and her long-term assistant Lucy Young discuss food incessantly.

They have worked together for 32 years and have a very close relationship. Mary often refers to Lucy as ‘the Boss’.

‘We talk about recipes, try them out, bring in all the new ingredients – but we never mention food at all at meal times because it’s really boring for my husband,’ says Mary. 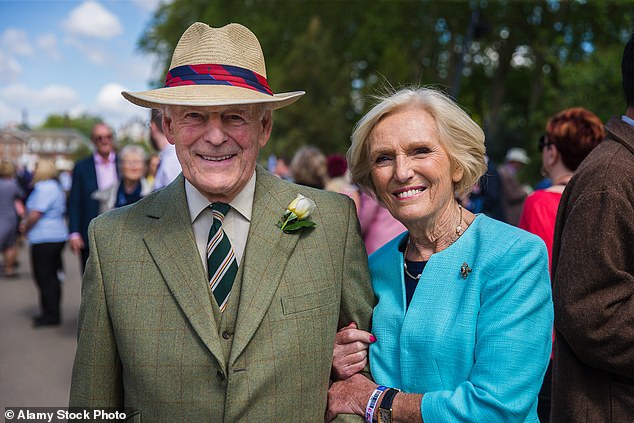 Mary is pictured here with her husband Paul who has just taken up croquet. The couple share that they have lessons with a Finnish lady

Would he like her to slow down? ‘I’ve asked him and he said, “You love what you do.

‘Carry on! I’ll be here when you come home.” And I always say there’s plenty of time to rest in heaven. The moment I run out of ideas is when I’ll stop.

‘I don’t work the long hours I did during Bake Off,’ she goes on. (Mary, of course, is baking royalty; the Queen of Cakes since she became co-judge with Paul Hollywood of The Great British Bake Off from its launch in 2010 until 2016 when it relocated to Channel 4.)

‘Then, I used to be filming until 7pm. Now, I’m always up at 5am, but I’m back home to cook supper for my husband. That’s most important.’

And here is Paul now, natty in crisp navy shorts and polo shirt. He pops into the kitchen of their home in Henley-on-Thames where we’re chatting, to say hello.

‘He’s marvellous for 90,’ I say under my breath to Mary. ‘Yes, he’s pretty good. We’ve just taken up croquet. 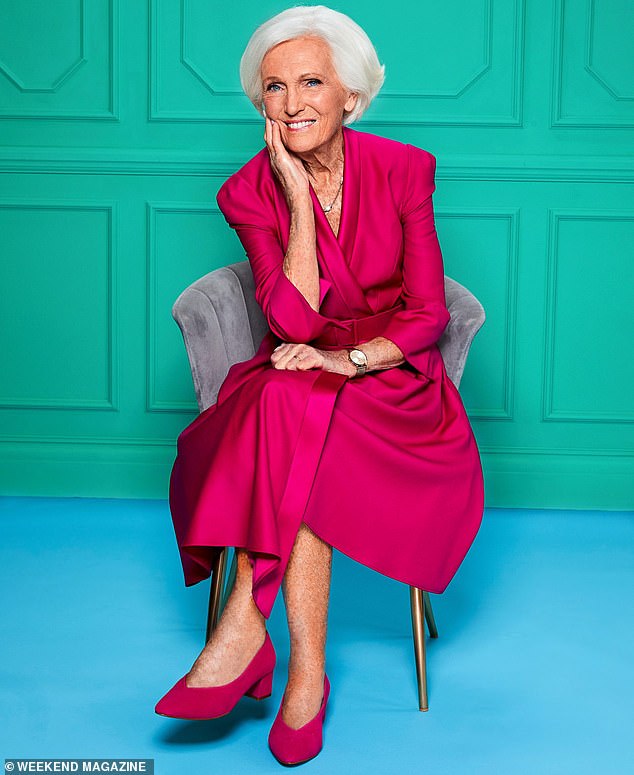 The close family ties around which their lives pivot are doubly cherished because they lost a son, William, who was killed, aged 19, in a car crash in 1989

‘I’ve never played a sport with my husband before because he says I have no ball sense, but we have lessons with a lovely Finnish lady – she is so patient with us and we absolutely love it! So it’s a great joy to play sport together at last.

‘My husband used to play rugby for Saracens, and tennis and squash, but now he’s 90 he can’t. But croquet is perfect for people our age. We play for two hours and he says he’s knackered at the end but after a bit of a zizz he perks up again.’

Does this means he’s abandoned tennis? ‘Oh no,’ she says. ‘I’ve played – very badly – with the same friends for 30 years. These days I’m just careful not to fall.’

She’s lovely: mischievous, funny – and very modest – with a twinkle in her blue eyes. Slim in white golfing shorts and a turquoise and orange top, she has perfect posture.

I love that my grandchildren work very hard at school. I did not and I regret it. Homework was for swots!

Conversation meanders back to her marriage and she says, ‘I think I’m happier now and I love my husband even more than I did when I married him.

‘A marriage has to be worked at. I never shout. If something irks me I just go into the garden and do some hoeing.’

I’m tickled to learn that it took three proposals before Mary agreed to marry Paul. ‘He was very nervous and he kept suggesting we get married after he’d had a drink.

‘So I said, “Yes, but you’d better ask my dad.”’ Mary’s father, Alleyne Berry, a surveyor and former mayor of Bath who helped set up the university there, lived with her mother Margery at Charlcombe Farm north of the city.

‘Dad kept doves and when Paul went to ask for my hand he drove over one. Dad called him a ‘blithering idiot’ and Paul thought it wasn’t the best time to speak to him.

‘The next week he went back with a case of wine – he worked for Harveys of Bristol then – and gave it to my father before asking the question. Dad said, “Yes, but you’ll find her quite difficult.”’ 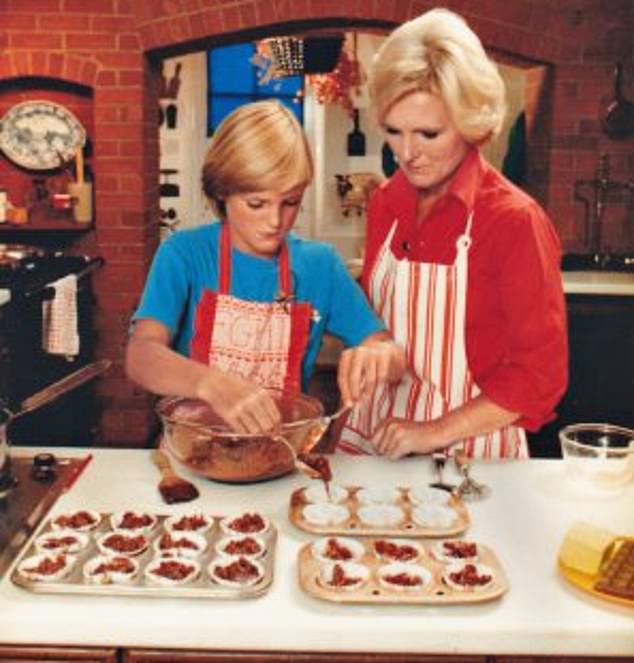 Mary baking with daughter Annabel in the 1970s. The couple hold close Annabel as well as  their son Tom

What on earth can he have meant? ‘Well, I was quite a strong character,’ says Mary.

Her husband says she has ‘certainly mellowed’ over the years. ‘Life was so hectic when we were bringing up three children.

‘You just have to hang together and be a team. Now there are just two of us and it’s lovely – but we welcome the children and grandchildren back with open arms.’

Which, of course, is always an opportunity to share her delicious cooking with loved ones.

The close family ties around which their lives pivot are doubly cherished because they lost a son, William, who was killed, aged 19, in a car crash in 1989. His sister Annabel, travelling with him, was mercifully spared. 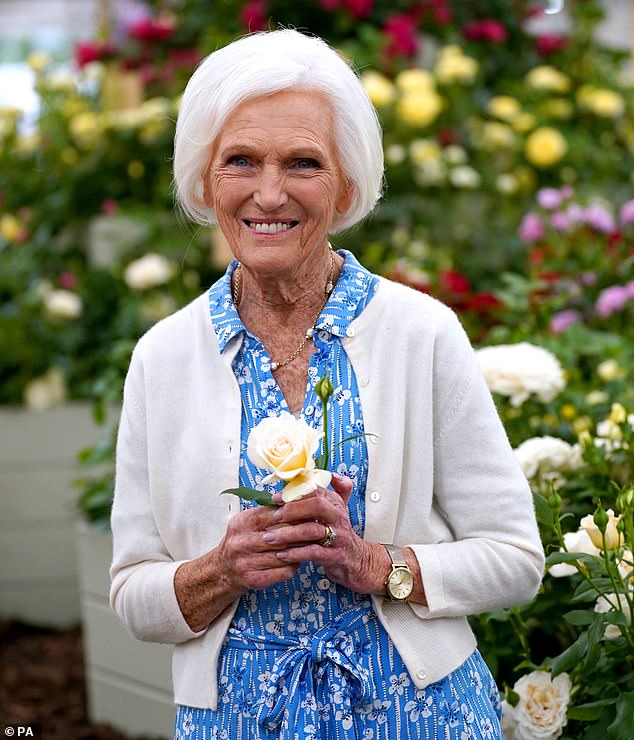 Her latest book includes crowdpleasing recipes with teenagers in mind: you can imagine them wolfing down Jumbo Lentil Rolls, tucking in to a Provence Tomato And Garlic Pistou Tart

‘The children come to stay and I don’t mind what time they get up in the morning. I cook their favourite things; absolutely.

‘And my food has evolved to accommodate their more creative and adventurous tastes.’ Meals, too, have become less formal.

‘We don’t have three-course dinner parties so much and it’s rather a relief. I still like to prepare ahead because you never know what will happen on the day, but I’ll put a pile of plates and the food on the table and everyone will help themselves and we’ll often eat outdoors.’

Her latest book includes crowdpleasing recipes with teenagers in mind: you can imagine them wolfing down Jumbo Lentil Rolls, tucking in to a Provence Tomato And Garlic Pistou Tart or demolishing a slice of Ginger And Orange Polenta Cake.

The book is accompanied by a six-part BBC2 series, Mary Berry – Cook And Share, in which she travels the length and breadth of Britain, connecting communities and generations through food.

At Edgbaston, home to Warwickshire County Cricket Club, she makes hot smoked salmon rice and asparagus salad for the team – and is persuaded by England international Jonny Bairstow to hit a few balls.

She goes to Bristol, too, where her late son William was an undergraduate when he died, and granddaughter Grace is now studying. Time is always made when she’s in the area to visit the memorial plaque there in William’s memory.

‘We often go to Devon or Cornwall and we always drop off the M4 and pop in to see Will,’ she says, quite as if he’s still with her (which, in a sense, he is.) ‘We always have a quiet few moments with him.’

Her reflections are never marked by self-pity: you sense that a strong faith sustains her.

‘We go to our local church. We have a lovely vicar, and we go wherever he is for Sunday communion. It’s part of our routine.’

But she has played percussion for Rick Astley. On the week I visit, she is due to cook at the Wilderness Festival in Oxfordshire and meet headline performer Sophie Ellis-Bextor.

I ask if she’s ever been to a music festival before and she exclaims: ‘Oh yes! I went to Camp Bestival and Rick Astley – such a lovely, warm person with very shiny shoes – asked if I’d play the drums and offered to teach me.

‘So I went and had a little practice on stage that afternoon. Then in the evening – in front of 20,000 people – they wheeled the drums onto the stage and I had to bang away.

After I broke my hip, my GP said if I sat in a chair and did no exercise I’d quite probably be dead in four years

‘I’d no idea what I sounded like and I was petrified. Afterwards Rick said, “That was brilliant” (which was rubbish) and Lucy had half a pint of wine in a plastic glass waiting for me – and it went down like lightning!’

What strikes me – aside from her willingness to take on new challenges – is her conviction that she won’t be any good at them. Dame Mary may be baking royalty but she is utterly bereft of pretension.

Despite her extraordinary accomplishments, she still reproaches herself for not working at school. ‘My great joy is that my grandchildren work very, very hard at school, whereas I did not and in retrospect, I regret it.

‘My exam results were not acceptable,’ she chides herself. ‘I didn’t do homework. That was for swots!’

A great favourite of our young royals – not that she’d make such a claim for herself – she remembers helping to calm the nerves of the Duchess of Cambridge before she made a speech at RHS Wisley three years ago.

‘I was walking along, talking to Catherine about this and that, and she said, “I feel a little nervous.” I laughed and said, “Hang on a minute. What do you suppose I’m feeling?”

‘Then we stretched our hands out and held them, and walked along forgetting anyone else was there.

‘Catherine’s a natural with her children and cooks with them, and when I did my Christmas programme with her and Prince William, he said how immensely proud he is of her.’

Last time I visited Dame Mary, a year ago, she was recuperating from an op on a broken hip, following a fall in her garden. Spry and positive, she was full of praise for the NHS staff who had helped her.

Today she gives me an update: ‘My GP told me: “You’ve two options.

‘You could sit in a chair and do no exercise and quite probably be dead in four years, or you can set to, walk (uphill too!) and do everything you can, and it’ll take 18 months for a full recovery.”

‘And gosh, she was right. I’ve exercised and had lots of physio and it’s not quite normal yet, but it will be.’

Her default mode is positive: she does not complain. She even makes a recent bout of Covid seem like a blessing.

She and Paul had it a few months back, while on holiday in Corfu. ‘We were lucky!’ she says.

‘We got it together. We didn’t have to be split up. Imagine if it had been just one of us, in a room on our own.’

On cue, Paul arrives for his midmorning hot chocolate. Lucy appears with home-made shortbread, which Mary parcels up for me to take home.

She walks to the front door to wave me off; slender, upright, elegant – and as delighted as ever to spread joy by cooking and sharing.