The former boss of alleged dating app killer Ashley Gaddie has revealed the tradie was a flaky employee who ghosted the company after a few weeks.

Gaddie, 33, was arrested on a cliff top in the Blue Mountains on Tuesday night after a tense 12-hour standoff with police.

The tattooed tradesman was wanted over the brutal alleged killing of teacher and soccer administrator Dannielle Finlay-Jones, 31, who he met on a dating app.

Gaddie had allegedly been on the run since she was found dead with severe head injuries at a friend’s Cranebrook home in western Sydney on Sunday afternoon. He is expected he will be charged with murder in coming hours.

Details of his work history exclusively obtained by Daily Mail Australia show Gaddie was a transient laborer who couldn’t hold down a job.

New details have emerged about Ashley Gaddie’s fragmented work history. He is pictured on a worksite in a photo he posted on his Tinder profile 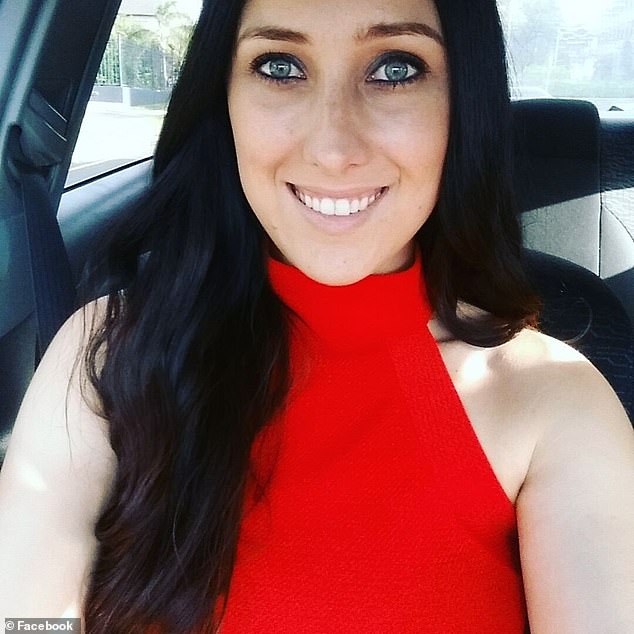 Dannielle Finlay-Jones, 31, (pictured) was found dead at her friend’s Cranebrook home on Sunday, sparking a manhunt for her alleged killer

In a typo-riddled resume, Gaddie boasted about his ‘excellent communication’, ‘self-motivation’ and his ability to ‘plan, prioritise and schedule workloads and assigned tasks’.

His onetime boss said he gave the driller a job last year working on a regional site in far west New South Wales after he reached out seeking employment.

‘He was deployed from Sydney to Broken Hill and did two swings,’ he told Daily Mail Australia.

‘He worked the two stints over four weeks then he did a no-show.’

Another former colleague from a different drilling company said Gaddie was ‘quiet and reserved’ and tended to ‘keep to himself’ on sites. 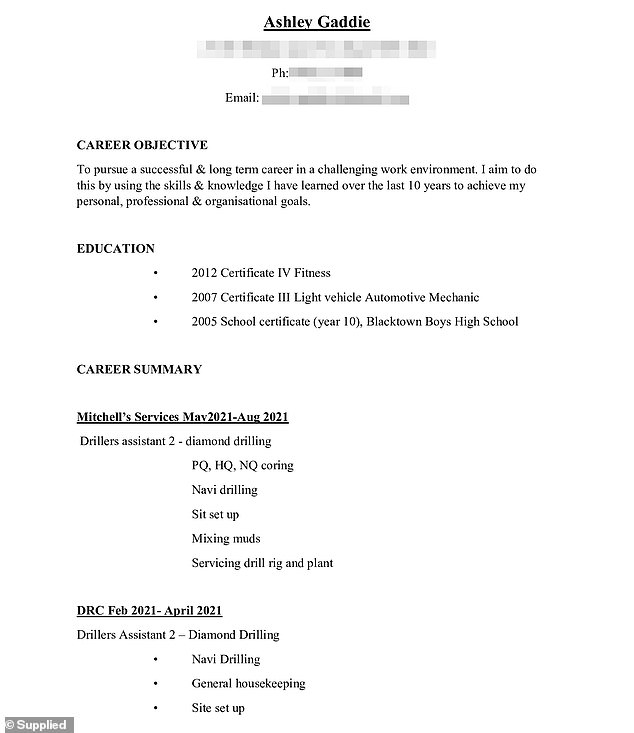 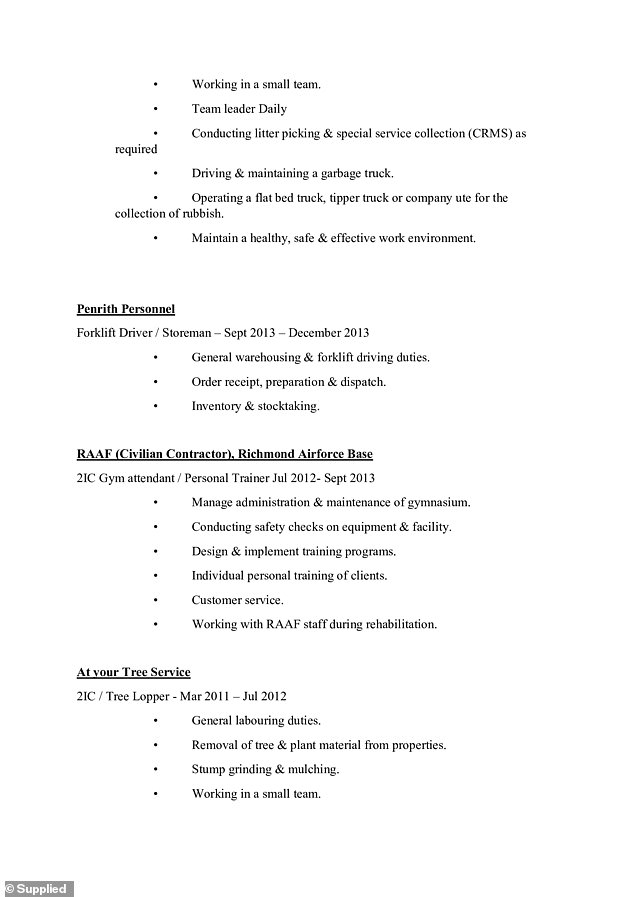 Gaddie’s resume stated he was also a personal trainer, forklift driver and a tree lopper 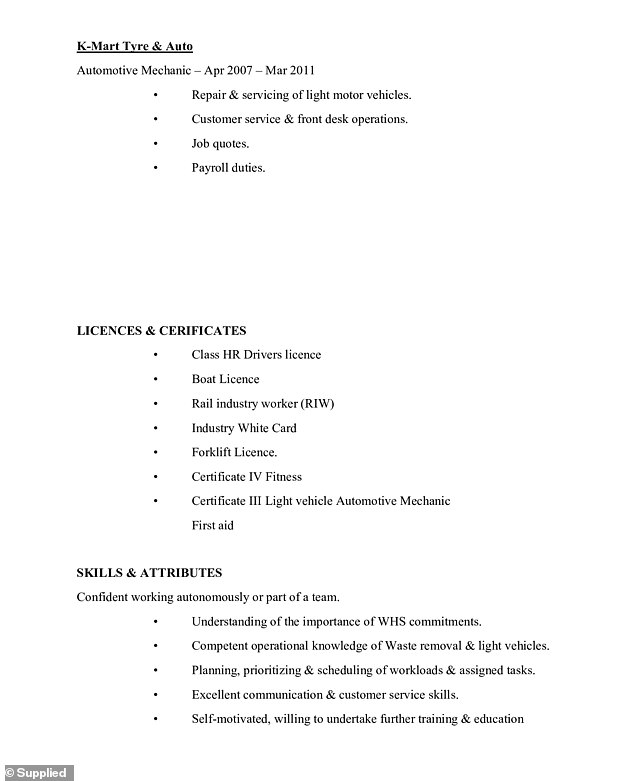 According to his resume, he held several licences and certifications 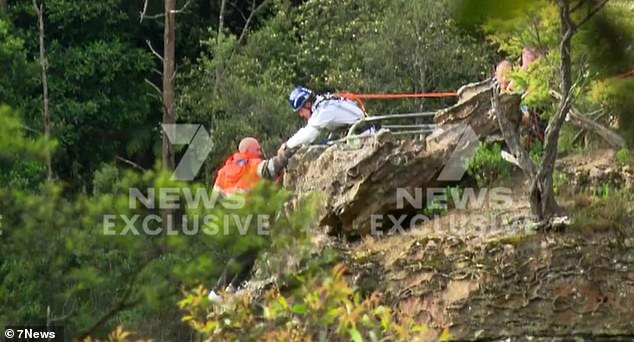 On Tuesday night, response squads swarmed an area in the Blue Mountains with specially trained police negotiators engaging with the alleged fugitive who was perched at the top of a precarious clifftop at Fletcher’s Lookout

‘I only worked with him for two or three weeks, but he was nice and seemed alright,’ the coworker said.

‘He was a ”stay-by-himself” sort of person, but he was good at what he did. He would show up and do his job.

The colleague said he didn’t mingle with Gaddie outside of work and he was ‘just another one of the guys who came and went’ in their revolving door industry.

‘When a friend sent me a text with details about his arrest, I was shocked,’ he said.

‘I feel so sad for the woman’s poor parents – losing a child, especially right before Christmas.’

According to Gaddie’s resume, he was a drilling assistant from July 2019 to September the following year, when he stepped up to a trainee driller at the same company.

After five months in that role, he left the company and has since jumped between drilling jobs across the state for at least three different companies.

Prior to drilling, he had a string of jobs – including as a garbageman, an automotive mechanic, forklift driver, personal trainer and tree lopper.

At the top of the CV he wrote his career objective was to ‘pursue a successful & long term [sic] career in a challenging work environment’.

‘I aim to do this by using the skills & knowledge I have learned over the last 10 years to achieve my personal, professional & organisational goals,’ he said.

In the skills and attributes section, he also boasted about his ‘excellent communication’, ‘self-motivation’ and ability to ‘plan, prioritise and schedule workloads and assigned tasks’. 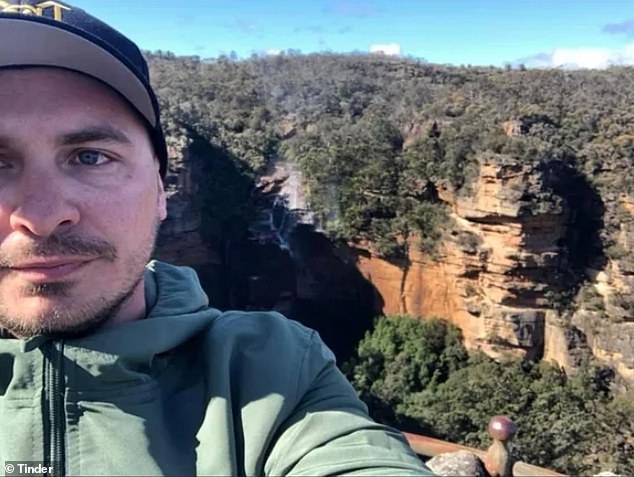 Gaddie was taken into custody on Tuesday after response squads swarmed an area in the Blue Mountains with specially trained police negotiators engaging with the alleged fugitive who was perched at the top of a precarious clifftop at Fletcher’s Lookout.

Photos posted on his Tinder profile – where he wrote that he was a keen outdoorsman- featured a picture of him at the same lookout as well as other spots in the Blue Mountains.

Seven footage shows police holding onto the suspect who had been scaling the rockface on the other side of a safety barrier in an orange high-vis jacket.

After a marathon stand-off, he was pulled onto the clifftop and arrested just after midnight.

Police said he would be assessed then taken to Katoomba Police Station where he would be charged with murder.

Ms Finlay-Jones connected with Gaddie on a dating app in early December, before meeting up at Marsden Brewhouse in Marsden Park on Saturday night, where the teacher introduced her new date to friends. 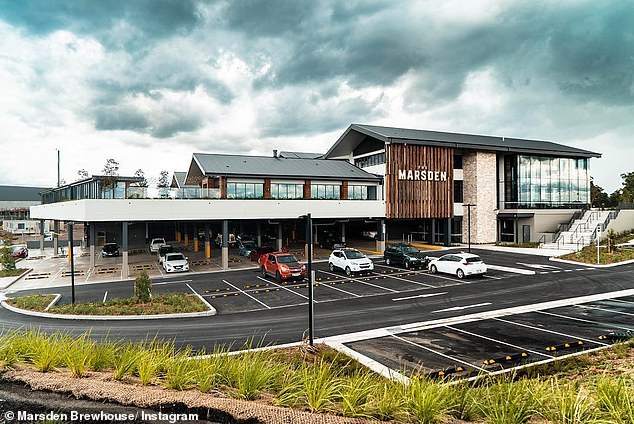 The pair then allegedly returned to her friend’s Cranebrook home, in Western Sydney, during the early hours of Sunday.

Police will allege Gaddie killed her sometime between then and midmorning then absconded from the home before her friends found her body about 2.30pm when they entered the room to check on the pair.

Meanwhile, tributes have poured in online for Ms Finlay-Jones, who was revered in her community as a female football pioneer and credited with encouraging dozens of women to take up the sport.

She worked as a support officer at the NSW Department of Education and was the Director of Female Football.

She was also a coordinator for Ramsgate RSL Football Club, in Monterey, south Sydney, and spoke on behalf of the club in videos on their social media pages promoting women’s sports.

One friend described her as an ‘incredible person inside and out’ while another said she had a ‘heart of gold’.

‘She is cherished by everyone who knew her and words cannot describe the shock that this has happened,’ one friend said.

‘She did not deserve this and will be dearly missed.’

Dannielle Finlay-Jones and Ashley Gaddie allegedly meet up at The Marsden Brewhouse, in Marsden Park, with her friends.

She allegedly introduces him to her friends as her new boyfriend.

Ms Finlay-Jones and Gaddie allegedly return to the woman’s friends place about 20km away, in Cranebrook.

Ms Finlay-Jones’ friends find her unconscious at the Cranebrook home and call paramedics, who pronounce her dead at the scene. Police believe she may have been dead up to eight hours.

Police issue an alert asking for the public’s help to locate Gaddie, saying a warrant has been issued for his arrest for alleged murder.

Reports emerge a police operation is underway in the Blue Mountains connected to the search for Gaddie.