DEBORAH ROSS: Miriam Down Under – rude, naughty but a sheer delight

Imagine… Lemn Sissay: The Memory Of Me

This week we said goodbye to the Aussie thriller The Secrets She Keeps and welcomed the French thriller The Last Wave, about a huge wave that causes the disappearance of surfers who later return changed. 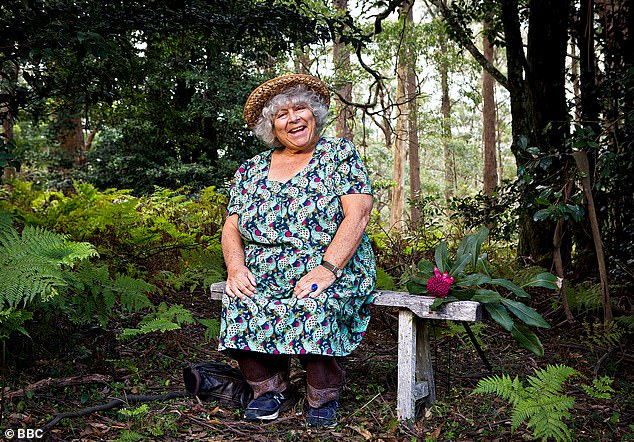 A camper adventure: Miriam Margolyes in Australia. I’m aware that some people can’t stand her, but I fall in love with her every time

It kicked off with two episodes on BBC4 last night, but halfway through the first one I had a brainwave: if you don’t watch these forgettable thrillers in the first instance you do not have to go to the trouble of later forgetting them. So, given it was rather dull – when is this wave coming? – I just stopped watching. I don’t know why I didn’t think of this before. I am a busy person, so having one less thriller to forget is quite a boon.

Now, as I seem to be done with forgetting forgettable thrillers, at least for the moment, we can turn our attention to documentaries and, first, Miriam Margolyes: Almost Australian. You’d think, by now, we’d be done with Miriam being wheeled out here, there and everywhere – she’s done The Real Marigold Hotel, she’s done America, she’s done obesity and death – and I’m aware that some people can’t stand her, but I fall in love with her every time.

She can be naughty and rude and say outrageous things to, as she puts it, give people ‘a jolt’, and she eats raw onions whole as if they are apples, which is always astounding, but underneath she is obviously deeply kind with such a big heart. And if I’m going to watch a celebrity travelogue, then give me a celebrity with a big heart. Rather than, say, Michael Portillo.

Here she laid out her stall: ‘This 78-year-old Jewish lesbian is embarking on a 10,000-kilometre, two-month journey to explore what it means to be an Australian today.’ Her partner of 52 years, Heather Sutherland, is Australian, and Miriam has dual citizenship and a house in the Southern Highlands (70 miles south of Sydney) that looked magnificent and had her big navy knickers drying on the line. (Heather, she said, dyes her knickers navy for her – we weren’t told why.)

Miriam is travelling by camper van even though she’s not au fait with camping – ‘Mummy said it wasn’t for nice Jewish girls’ – and it is so compact she has to nudge sideways into the loo. I know she plays up for the cameras but, still, it’s a ballsy thing to do. (The trip, that is; not nudging sideways into the loo.)

She met various people, including a Chinese-Australian woman who had made her fortune from selling property, a homeless woman living off-grid, a farming family for whom a recent drought had meant all their acres had turned to red dust – despite her avowed hatred of children she hugged the two little boys – and the Afghani young man who worked in the shop where, unusually, she happened to be browsing for a jumper. (‘I rarely buy clothes as I’m too fat.’)

He is now 25 and had come to Australia on his own at 11, after his parents and siblings were all killed. ‘I’m proud of what I’ve become’, ‘I’m safe here’, ‘I’m not going to die tonight’ and ‘I’m not going to get a bullet to my head,’ he said. She cried. So did I. And I just don’t know if Michael Portillo would have.

Imagine… offered a portrait of the poet Lemn Sissay, whose upbringing was extraordinarily difficult, and while Alan Yentob left no cliché unturned – ‘Lemn’s life is one of triumph and tragedy’ – Lemn himself said what he had to say beautifully.

He was born to a young Ethiopian woman studying here who returned home after his birth. He was named ‘Norman’ after his first social worker and didn’t know that his mother had put ‘Lemn’ on his birth certificate until he first saw it at 15. (‘Now my name is Lemn and the fire’s been lit,’ starts one of his early poems.) He was fostered as a baby by a white Baptist family who lived outside Wigan, but when he was 12 they asked social services to take him away as they said he had ‘the devil’ in him, although the truth was he had started to outshine his foster siblings. We saw him return to his childhood house, which no longer had a laburnum tree outside, but he remembered it clearly: ‘I was born into a laburnum tree family with its beauteous bloom… and poisonous seeds.’

He ended up in the care system, and after haranguing Wigan social services for years was finally allowed access to his records in 2015. And, my God. Here was a letter, for instance, from his mother asking social services how her baby might be sent to Ethiopia, and here was social services refusing to cooperate, even though they had no right. And there was more. So much more (I’m running out of space!).

One rather weird omission, though: while we caught up with his mother, in a way, why no mention of any father? But otherwise it was as affecting as it was riveting. And not forgettable. In any way.