As Alvaro Uribe, Colombia’s most powerful politician, was making his rise to the presidency more than two decades ago, US officials were repeatedly told that the up-and-coming politician had ties to the nation’s drug cartels, according to newly declassified State Department cables.

The cables were obtained and released Friday by the National Security Archive, a non-profit group, as Uribe’s handpicked candidate, Ivan Duque, is the frontrunner in polls to win Sunday’s presidential election.

They describe meetings between 1992 and 1995 between American officials and Uribe as well as other Colombian politicians in his then Liberal Party.

Colombia’s former President Alvaro Uribe stands between Ivan Duque, presidential candidate for Democratic Center party, right, and his running mate Martha Lucia Ramirez during a campaign rally in Bogota, Colombia, Sunday, May 20, 2018. Colombians will go to the polls on May 27 for a first round presidential election

In one 1993 cable, then Senator Luis Velez told a US Embassy political officer that Uribe was a cousin of the Ochoa crime family that partnered with Pablo Escobar and had financed his political campaigns.

Velez, then a close Uribe ally, explained that because of those ties Escobar demanded he meet with his wife to try and facilitate the kingpin’s peaceful surrender at a time he was the world’s No. 1 fugitive.

‘Escobar, through the Ochoas, is now demanding Uribe return the favors by trying to open a communications channel to Gaviria,’ an embassy political officer wrote in the confidential cable, referring to then President Cesar Gaviria.

Allegations of links to drug cartels and paramilitaries have dogged Uribe since the start of political career in the early 1980s, when the civil aviation agency he led was accused of giving air licenses to drug traffickers.

But he’s always denied them and while president from 2002-2010 was a staunch U.S. ally in the war on drugs, extraditing a record numbers of suspected drug traffickers to the US and aggressively expanding a US program to aerially spray illegal coca crops with chemical herbicide.

Uribe, in a video posted on social media, dismissed the allegations as ‘fake news, in electoral periods and without proof.’

Duque, whose father was governor of Uribe’s home state of Antioquia when his political career kicked off, didn’t comment.

In the turbulent 1980s and 1990s, at the peak of the Medellin cartel’s power, almost all Colombian politicians were suspect in the eyes of US officials.

A previously declassified U.S. Defense Intelligence Agency report from 1991 listed Uribe as one of 100 suspected Colombian ‘narcopols,’ calling him a ‘close personal friend’ of Escobar who was ‘dedicated to collaboration with the Medellin cartel at high government levels.’

The newly released cables provide a more nuanced look at some of the evidence underlying that assessment, and even some backhanded praise for the politician who would go on to decimate leftist FARC rebels on the battlefield, paving the way for their disarmament under a 2016 peace deal. 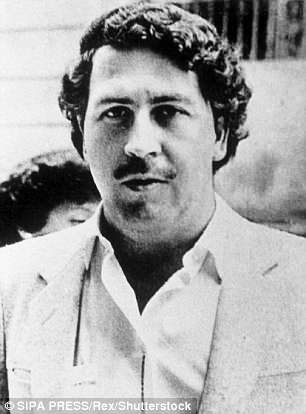 For example, after one meeting with US Embassy officials in 1992, Deputy Chief of Mission David L. Hobbs said Uribe comes across as a rising political leader and ‘serious interlocutor’ who wanted to draw close to the U.S. government.

‘With each meeting we become less inclined to believe the narco ties attributed to him,’ he wrote.

Still, throughout this period, U.S. Embassy officials appeared to waver in their judgement.

In another cable from March 1993, Ambassador Morris Busby states he believes there is ‘substance to the rumors,’ if no hard evidence, that Uribe and future President Ernesto Samper, whose campaign he was backing in Medellin, had ties to drug traffickers.

Prosecutors would later determine that the Cali cartel spent millions of dollars on Samper’s campaign and the U.S. would go on to revoke his visa and withdraw all support for his government.

Despite an ongoing Supreme Court investigation against Uribe in a witness-tampering case involving a paramilitary group he was allegedly covering for, he was the most voted candidate in March elections for the Senate.

Meanwhile his brother, Santiago Uribe, is awaiting trial on charges he was a leader in a death squad called the Twelve Apostles that was run from his cattle ranch.