Trying to quell accusations that he is ousting activists from the party’s left flank, Democratic Chairman Tom Perez told fellow Democrats on Saturday that unity is crucial in the fight against President Donald Trump, whom he lambasted as an ‘existential threat’ to the nation.

The former Obama Cabinet official blistered ‘a culture of corruption’ that he said extends to Trump’s Cabinet, House Speaker Paul Ryan and Senate Majority Leader Mitch McConnell, but he warned that internal ruckuses over party priorities and leadership would distract from the goal of winning more elections to upend Republicans’ domination in Washington.

The chairman’s plea comes amid a rift over his appointments to little-known but influential party committees and the 75 at-large members of the national party committee. Perez and his aides plug his choices as a way to make the DNC younger and more diverse, but the moves also mean demotions for several prominent Democrats who backed Bernie Sanders over Hillary Clinton in the 2016 presidential primaries and then supported Minnesota Rep. Keith Ellison over Perez in the postelection race for party chairman.

Perez spent time during this week’s proceedings meeting privately with frustrated DNC members, including some he did not reappoint. He apologized publicly Saturday for not reaching all of those members before he announced his appointments, but he defended his overall aim. Democratic Chairman Tom Perez told fellow Democrats on Saturday that unity is crucial in the fight against President Donald Trump, whom he lambasted as an ‘existential threat’ to the nation

Republicans, meanwhile, have exalted in the internal wrangle, painting the DNC as incompetently discordant.

‘The Democratic Party’s message of doom and gloom has left them leaderless and nearly extinct in most of the country,’ Republican National Committee spokesman Michael Ahrens said. ‘If Tom Perez wants his party to stick with that same failed strategy, Republicans will gladly keep working to help the middle class by cutting their taxes and fixing our broken health care system.’

To some extent, the Democrats’ developments reflect routine party politics after an unusually contentious chairman’s race, but they also fit into the ongoing philosophical tussle on the left.

Sanders’ backers accused the DNC in 2016 of stacking the nominating process in Clinton’s favor and shutting out the Vermont independent who still seeks to pull the party toward his ideology. Those frustrations carried over into the DNC chair race between Perez, the former labor secretary, and Ellison.

Now, Perez’s appointees will hold sway over setting the primary calendar in 2020 and, perhaps most importantly, whether the party’s superdelegates, including the 75 at-large members, will continue to cast presidential nominating votes at Democratic conventions without being bound to any state primary or caucus results. 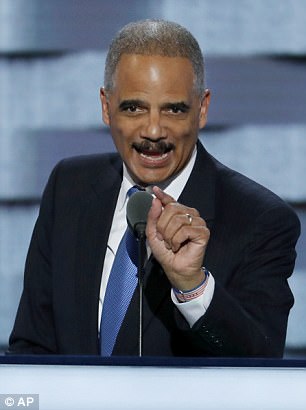 Democrats are looking next month to hold the Virginia governor’s seat and wrest the New Jersey governor’s seat from Republican control. Next year, Democrats need to flip at least 24 Republican congressional seats to regain control of the House. They face an uphill battle in gaining control of the Senate, because they must defend 10 incumbents in states Trump won last November. Democrats also want to increase their gubernatorial roster from the current 15 state executives.

Holder leads a political action group, with fundraising support for former President Barack Obama, to back candidates in states where gerrymandering gives Democrats an uphill path to majorities. He singled out Virginia, Wisconsin, North Carolina, Georgia and Texas, among other states, where Republicans ‘picked their voters’ with districts that ‘are impressive in their geographic creativity but they are destructive to representative democracy.’