Rod Rosenstein first joined the Department of Justice in 1990, when he was tasked with prosecuting public corruption cases with the Public Integrity Section of the Criminal Division.

During the Clinton administration, Rosenstein served as counsel to Deputy Attorney General Philip B. Heymann.

Rosenstein also worked for Ken Starr, the independent counsel who was leading the Whitewater investigation into President Bill Clinton.

In 2005, Rosenstein was unanimously confirmed as U.S. attorney for the District of Maryland.

In 2017, President Trump nominated Rosenstein to be deputy attorney general under Jeff Sessions.

On May 8, 2017, Trump asked both Sessions and Rosenstein to put in writing a case against then-FBI Director James Comey which would serve as the basis for his removal.

On May 9, 2017, President Trump fired FBI Director James Comey. He cited a memo written by Deputy Attorney General Rod Rosenstein as the basis for Comey’s dismissal

Rosenstein wrote in the document that the FBI needs a ‘Director who understands the gravity of the mistakes and pledges never to repeat them.’

The letter by Rosenstein is used by Trump as justification for Comey’s firing.

It was reported that Rosenstein threatened to resign after administration officials cited the memo as reason for Comey’s dismissal, but Rosenstein denied this.

Comey was fired on May 9 by Trump. In the termination letter, Trump said he was acting on the recommendation of Sessions and Rosenstein.

During his private meetings with Trump, Comey wrote memos that included his recollections of the talks.

On May 11, 2017, Trump gave an interview to Lester Holt of NBC News in which he said that he let Comey go because of ‘this Russia thing.’

The FBI at the time was investigating alleged Russian meddling in the 2016 elections.

In March, Sessions recused himself from overseeing Russia-related investigation, which meant that Rosenstein served as acting attorney general on the matter.

On May 17, Rosenstein appointed Robert Mueller as special counsel to investigate the Russia matter.

A month later, it is learned that Mueller expanded the scope of the investigation to probe whether Trump obstructed justice.

Throughout the investigation, Rosenstein was subject to fierce criticism from Congressional Republicans who accused the Justice Department and the FBI of having an anti-Trump bias that was guiding their thinking in the Russia matter.

On June 13, Rosenstein testifies before the Senate, telling lawmakers that he is the only person empowered to fire Mueller.

Rosenstein also told senators that he did not see any reason for dismissing Mueller.

Manafort was also being investigated for receiving payments from Ukrainian politicians as part of consulting work he did in the Eastern European country.

Throughout this period, Rosenstein resists calls from Republicans to shut down the Mueller probe, particularly after it was learned that Peter Strzok, an FBI investigator working with the special counsel, sent text messages to his lover containing criticisms of Trump.

On December 13, 2017, Rosenstein appeared before the House Judiciary Committee.

He told lawmakers that he saw no reason to fire Mueller. Rosenstein also said that Strzok was removed from the special counsel’s team in a timely manner and that the probe was not a ‘witch hunt,’ as the president claimed.

In late January 2018, it was reported that Trump demanded the firing of Mueller, but White House Counsel Don McGahn threatened to resign, forcing the president to back down.

On April 12, Rosenstein tells Trump that he is not a target in Mueller’s probe.

In May, Rosenstein agrees to allow Congressional leaders to view ‘highly classified and other information they have requested’ related to the Russia investigation. 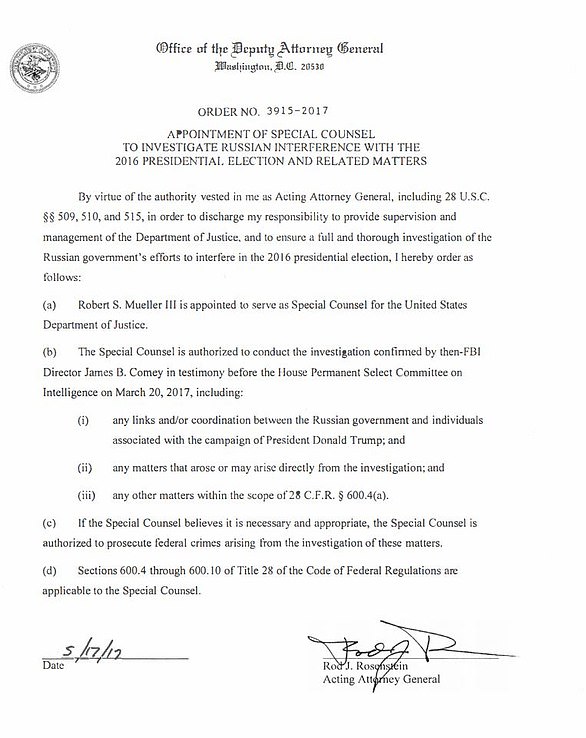 On May 17, 2017, Rod Rosenstein, who is acting attorney general after Jeff Sessions recused himself from all Russia-related investigations, appointed Robert Mueller as special counsel to probe Russian interference in the 2016 elections

In September, The New York Times reported that former FBI Deputy Director Andrew McCabe wrote memos in which Rosenstein is portrayed as someone who talked of secretly wearing a wire when meeting with Trump.

Rosenstein was also said to have discussed removing Trump with cabinet officials by invoking the 25th Amendment.

Rosenstein disputed the accuracy of the Times story.

On November 7, 2018, Sessions resigned. He was replaced by Matthew Whitaker, who served as acting attorney general.

Barr assumes broad authority over how much of the Mueller report to release.

On March 22, Mueller submits his confidential report on the findings of his investigation to Barr.

Two days later, Barr releases a summary of the ‘principal conclusions’ of Mueller’s report and wrote that the investigation did not establish that members of Trump’s election campaign conspired with Russia.

Mueller did not exonerate Trump on obstruction of justice, said Barr, who himself concluded the inquiry had not found sufficient evidence to warrant criminal obstruction charges against Trump.

On March 25, Democratic lawmakers demand that Barr send the full Mueller report and any underlying documents to Congress by April 2 and say the attorney general’s summary is not sufficient. The deadline is not met.

On April 3, the Democratic-led House of Representatives Judiciary Committee voted to enable its chairman, Jerrold Nadler, to subpoena the Justice Department to obtain Mueller’s unredacted report and all underlying evidence as well as documents and testimony from five former Trump aides.

On April 18, the Justice Department releases a redacted version of the Mueller report.