Barnaby Joyce has been fined by New South Wales Police for failing to wear a mask, in what he called a ‘funny story’.

The deputy prime minister and Nationals leader was reported to police by a member of the public while filling up at a petrol station in Armidale, in northern NSW.

The local resident called Crime Stoppers to report 54-year-old after he was inside the store for less than a minute.

Officers checked the petrol station’s CCTV after being called to the site, before they confirmed he was not wearing protective gear and issued the penalty.

Joyce was fined $200 for failing to wear a mask while indoors, as is mandatory across the state.

Mt Joyce called his brief Covid breach a ‘funny story’ when he relayed it to Alan Jones on Sky News.

‘You’ll like this story. I went into the Caltex service station. I was going to the airport. I forgot to get fuel for Biggie, fill the car up with fuel,’ he said.

‘Went in, 30 seconds later… two hundred bucks it cost me because I didn’t wear one of these. That’s life.’

NSW Deputy Police Commissioner Gary Worboys said the fine was a warning to the public that no one was above the law. 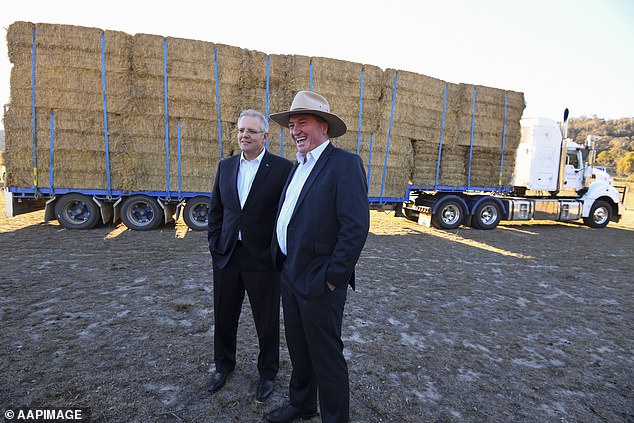 ‘I respect the office of the Prime Minister. It’s incredibly important. But to say you have to like the person? You can, but it’s not necessary’, Mr Joyce (right) said of Scott Morrison (left)

‘That person was apologetic and cooperated with police being firm and fair,’ he said at a press conference on Tuesday morning.

‘The commissioner of police has made it very clear to every police officer that, whilst we will take action, we still need to be fair in relation to people who are clearly on the edge of an order, or where they think that they might have a good and reasonable excuse.

‘Police are rostered 24/7 right across the state and they will take action, and certainly the incident at Armidale is clear evidence that police will investigate and take action.’