A paedophile who changed his identity to hide his past was caught out by friends who found a bank card featuring his real name.

Scott Cordner, from Derby, changed his name to Ellis McLeod without telling police – which was not allowed under his post-sentence release licence.

While visiting a restaurant, the 46 year old dropped a credit card with his original name which his friends picked up.

Thinking the name discrepancy was suspicious, they Google searched Cordner and discovered he had been released part-way through an eight-year jail term for sexually abusing young girls.

They told police, who looked into McLeod again, and found he had been in regular contact with an underage girl.

Paedophile Scott Cordner, from Derby, changed his name to Ellis McLeod to hide his past, but was caught out when friends found an old bank card and Google searched his name

McLeod, who has been recalled to jail to carry out the rest of his eight-year sentence, has been handed a fresh 21-month prison term which will run concurrently alongside it.

Judge Jonathan Bennett said: ‘They made their own enquiries on the internet and came up with information about your past offending.

‘You realised the game was up. I have read a letter you have sent me and it is very much about you and the effect this has had on you. It is a very self-centred letter.’

In 2014, McLeod, of Yoxall, Staffordshire, was jailed for six years after admitting sexual activity with one youngster, three charges of sexually assaulting a second girl and nine counts of making indecent images of children. 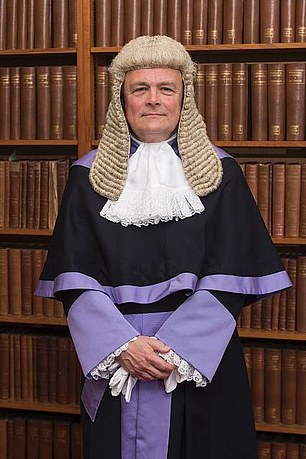 Sentencing him, Judge Jonathan Bennett said: ‘I have read a letter you have sent me and it is very much about you and the effect this has had on you. It is a very self-centred letter’

That hearing was told how he and a second man met in an internet chat room and after exchanging disgusting messages about sexual offences against children, did it for real.

Later the same year his sentence was increased to eight years at the Court of Appeal who deemed the original sentence as being unduly lenient.

Presiding over that hearing, Lord Justice Pitchford said: ‘There was, in this case, undoubtedly remorse – the men were, on reflection, shocked by their own depravity.

‘We do, however, accept the submissions of the attorney general. We conclude that the sentence was unduly lenient. It was a depraved sexual assault on an infant child.’

The offences against the first girl came to light when McLeod’s then-wife was using her husband’s computer in January 2013 and found his sick online conversations with the second man.

The second case came to light when another girl reported to Childline that she had been sexually assaulted.

For his latest offence McLeod pleaded guilty to breaching the terms of his sexual offences protection order and his notification requirements.

Stephen Tettey, mitigating, said his client had pleaded guilty at the earliest opportunity and had been open and frank with the police when the fresh offences came to light earlier this year.