Derbyshire moorland fire may have been started by barbecue, say police

Covidiots ‘to blame’ for two moorland blazes: Firefighters believe brainless barbecue gang and arsonists are behind separate wildfires during lockdown

A fire which raged across moorland in Derbyshire on Friday may have been started by a barbecue  – despite the country being in a state of lockdown for three weeks.

The spate of warm weather has seen people heading out for picnics and sunbathing, despite government telling Brits to stay inside.

On Friday two fires started in moorland in Derbyshire, both of which were started intentionally, police believe.

Derbyshire Fire and Rescue Service were called out to two fires on moorland on Friday evening. Firefighters now believe the fire in Woodhead was started by a barbecue left by people flouting lockdown rules

Derbyshire Fire and Rescue Service group manager Paul Hawker said: ‘Clearly the stay at home message isn’t getting through to some people and once again it’s devastating to see fires burning on the moors.

‘Moorland fires cause untold damage to the landscape and local wildlife and while crews are tied up responding to such fires, they aren’t available to attend potentially life risk emergencies.

‘At a time when we are all coming together to play our part in supporting the NHS and other key workers, saving lives and generally doing what we can to get through this pandemic, the thought of someone deliberately starting such a fire is despicable.

‘The advice is quite simple, stay at home.’ 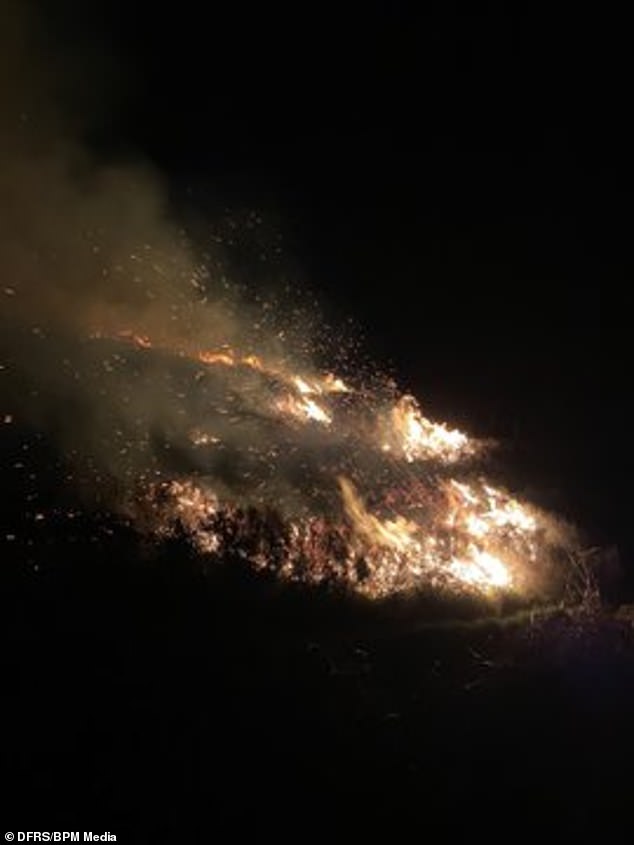 Detective Inspector Toby Fawcett-Greaves of Derbyshire Constabulary said the fire at Woodhead is thought to have been caused by a BBQ which got out of control.

He said: ‘Flouting the guidelines puts not only yourselves at risk, but also those who are here to keep you safe. A number of officers and firefighters were deployed to this incident, one which was clearly avoidable.

‘We are following a number of lines of enquiry to identify those responsible.

‘I would ask local communities to remain vigilant and I encourage anyone with information that could help us with our investigation to contact us on 101.

‘Please remember, stay at home, save lives and protect our NHS.’