Andrzej Sikora has admitted giving Jennifer and James Crumbley shelter from ‘death threats’ in the wake of the massacre allegedly carried out by their son Ethan in Oxford, Michigan, last Thursday.

But he says he had no idea the pair had stayed at his Detroit studio overnight, and only discovered the Crumbleys stay after their arrest at 1:30am Saturday.

Jennifer, a realtor, has a longstanding professional connection with Sikora, who has completed work on at least one building at her behest.

Dass said the couple told his client on Friday that they were ‘just staying for a few hours to avoid death threats.’

Andrzej Sikora (pictured) is friends and business associates with the Jennifer and James Crumbley, the parents of alleged school shooter Ethan Crumbley, according to his lawyer Clarence Dass. The pair were found at the artist’s studio on the 1100th block of Bellevue Street on Saturday at 1.30 am

‘There were no charges, warrants or court dates at that time,’ Dass said on Sunday night. ‘My client had no idea they were staying overnight – he left earlier in the day.’

Although there was a warrant out for the couples’ arrest and a massive, well-publicized manhunt was launched when they didn’t show up for their arraignment for involuntary manslaughter charges at 4 pm on Friday, Sikora told the outlet that he had just been made aware of the investigation and was in conversations with people.

He didn’t specify whether he meant law enforcement or lawyers, and declined to comment further, and told the outlet that they ‘will see more information.’ 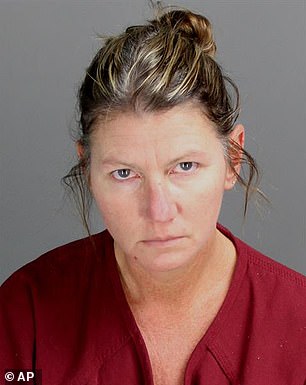 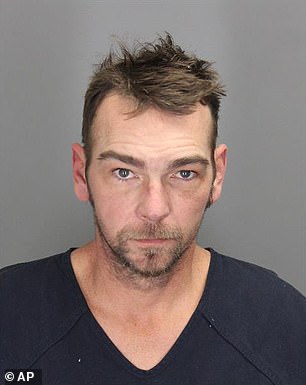 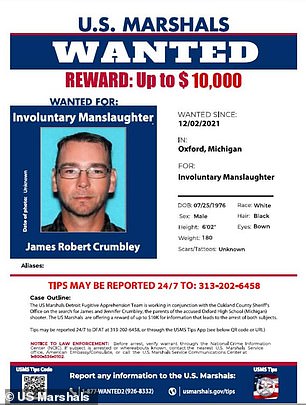 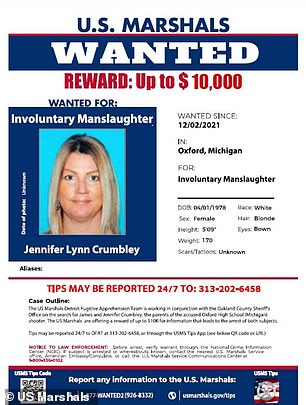 James and Jennifer Crumbley were the target of a federal manhunt; US Marshals placed a $10,000 bounty on information leading to their arrest after they were charged with involuntary manslaughter on Friday 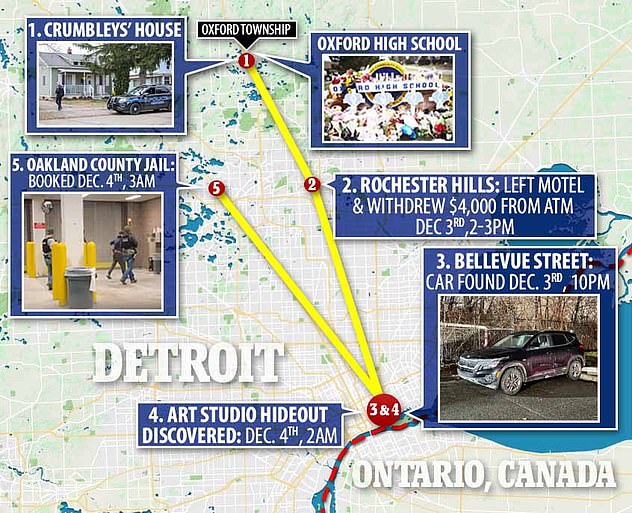 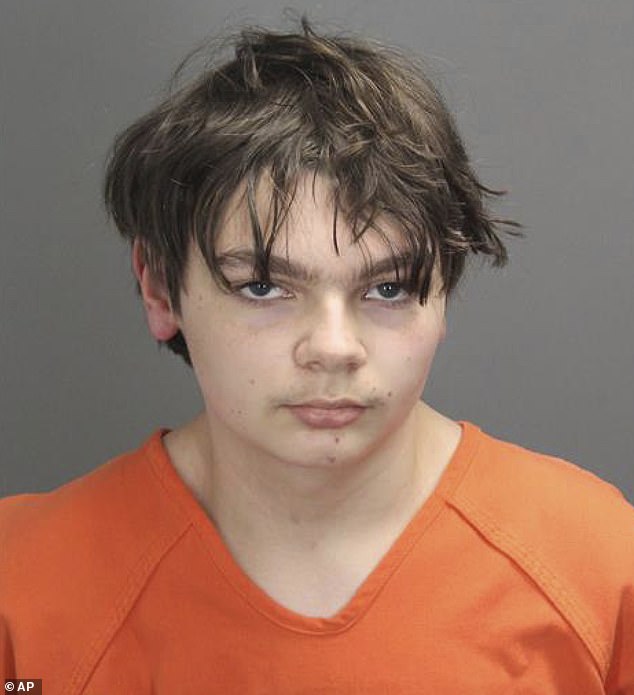 In fact, there were charges at that time.

On December 3, the day before, Prosecutor Karen McDonald announced that Ethan Crumbley’s parents were being charged with four counts of involuntary manslaughter.

But Dass told DailyMail.com that the Crumbley’s had turned off their phones and didn’t tell Sikora.

‘He told them to leave as well – they stayed without his knowledge until they were arrested at 2 am. When he found out, he went to the police right away.’ 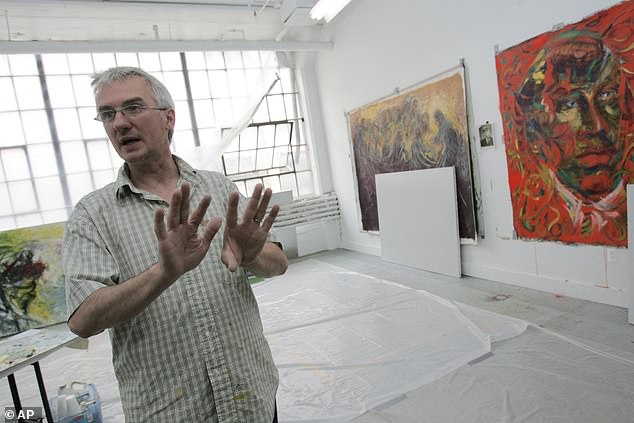 Before he moved to the U.S. in 1990, Sikora (pictured) studied, painted and worked as an art professor in Poland, according to his biography on the My Finest Art agency’s website . His work has been displayed in mansions, restaurants and an opera house in Michigan 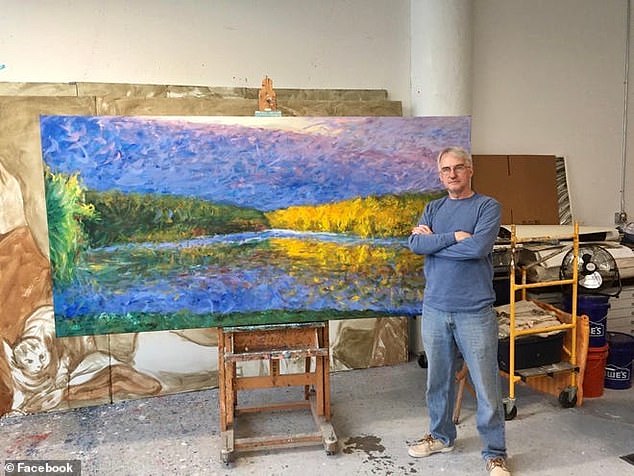 Andrzej Sikora (pictured) ‘had no idea they were staying overnight’ at his studio, according to his attorney – ‘he left earlier in the day’ 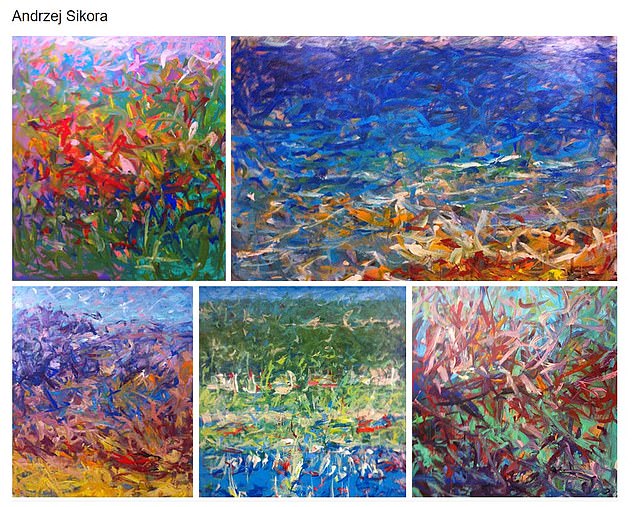 Pictured are artworks by Andrzej Sikora, the artist who let ‘fugitives’ James and Jennifer Crumbley into his art studio in Detroit

When asked what time the couple had arrived at Sikora’s studio, the attorney said it was on the morning of December 3, but declined to give a specific time, citing an active investigation.

The pair had withdrawn $4,000 from an ATM around 2 or 3 pm on December 3 – it is unclear whether they did so before or after initially arriving at Sikora’s studio. They were last seen on Thursday, when they tuned in to their son’s virtual arraignment from a car.

Oakland County Undersheriff Michael McCabe said a woman was spotted smoking a cigarette near the couple’s abandoned Kia near the studio and ran away when the business owner called police.

Detroit law enforcement had been searching areas near the water, raising questions about whether the couple was attempting to cross the border – but questions regarding that theory weren’t answered  at a Saturday press conference.

Their arrest was without incident and came after the U.S. Marshals offered a $10,000 bounty for information leading to their capture when they fled Friday after involuntary manslaughter charges in connection with the school massacre perpetrated by their son were announced.

On Saturday afternoon, Oakland County Sheriff Michael Bouchard said that his office was considering charging a person who had ‘clearly helped them into that location and made it available to them with obstruction of justice or aiding-and-abetting.

The Crumbleys were ‘friends and business acquaintances’ for a few years – ‘mostly just friends more than business.’

‘[Jennifer] did some marketing with my client, helped him with his website.’

Sikora finished a mural at Red Knapps American Grill, a bar just around the corner from the Crumbley’s house, according to the Oxford Leader. A picture of the artist standing in front of his artwork was previously attributed to ‘Jehn Crumbley,’ a nickname that the realtor-turned-marketing director goes by socially and professionally.

The article has since been updated to remove the photo’s caption, but it is still featured in a WayBack machine archive.

Before he moved to the U.S. in 1990, Sikora studied, painted and worked as an art professor in Poland, according to his biography on the My Finest Art agency’s website. His work has been displayed in mansions, restaurants and an opera house in Michigan.

The Crumbley’s purchased their home in Oxford in 2015, their lawyer said during their Sunday arraignment; Sikora bas been associated with a property in Lake Orion, a village about six minutes away from the Oxford Charter Township.

The writer of the article in the Oxford Leader featuring Jennifer Crumbley’s photograph did not response to DailyMail.com’s requests for comment, nor did the Crumbleys’ lawyers, Shannon Smith and Mariell Lehman.

Rudy Harper, the Second Deputy Chief of the Detroit Police, told The Daily Beast that the department has ‘not identified a third person to [his] knowledge.’

But Detroit Police Chief James White said that his department was ‘working no an angle on one other person who was assisting [the Crumbleys,]’ and that ‘additional charges could be forthcoming.’

The Oakland County Prosector’s office will be reviewing the Sikora matter, according to The Daily Beast.

‘Obviously finding [the Crumbleys] in a building in Detroit doesn’t lend itself to cooperation,’ the sheriff told DailyMail.com Saturday morning, a day after law enforcement issued a ‘be on the lookout’ alert for police to hunt down the ‘fugitive parents’ charged in connection with the Oxford High School deaths. 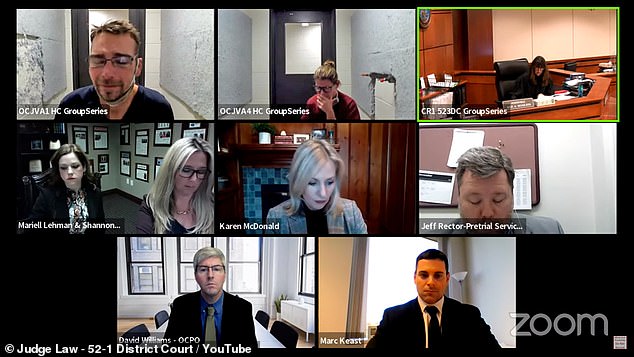 McDonald charged the couple for their ‘egregious’ conduct – from buying their son a handgun four days before the shooting, to keeping it in a bedroom drawer unsecured, to failing to mention that gun to teachers when their son Ethan drew a disturbing drawing about shooting people just hours before he killed four students.

Smith claimed that the couple had always intended to turn themselves in. McDonald, however, said that the Crumbleys ‘are not people that we can be assured are going to return to court on their own.’