‘Disabled’ Florida inmate, 51, is ‘beaten to death by a corrections officer’

‘Disabled’ Florida inmate, 51, serving jail time for stealing four $15 phone chargers from Target is ‘beaten to death by a corrections officer as two other employees watched on’

A Florida man jailed for stealing four $15 phone chargers has died in hospital after being was reportedly beaten by a correctional officer.

Christopher Howell, 51, was pronounced dead on Friday – one day after the ‘brutal eating’ purportedly occurred inside the Lake Correctional Institution, 25 miles west of Orlando.

Howell was less than halfway into a four-year prison sentence after he was arrested for theft and aggravated assault over a 2018 incident in West Palm Beach.

The Florida Department of Corrections confirmed Howell’s death, but said it can not name said it cannot release the names of officers involved in ongoing investigations.

‘I understand the need for an investigation, but there is film that can be pulled to immediately fire Officer Riley,’ Hart wrote.

According to The Miami Herald, Howell was beaten by the officer while he was still in handcuffs.

Inmates and another prison officer told the publication that two other employees watched on, but did not intervene during the violent encounter. 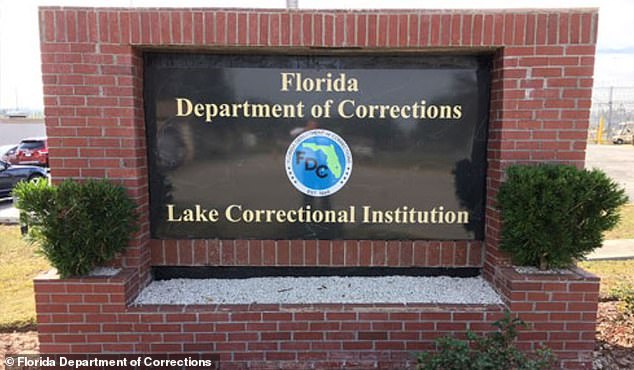 Howell was serving his four-year sentence at Lake Correctional Institution in Clermont, Florida

All three officers have reportedly been put on administrative leave.

Multiple sources told The Herald that ‘Howell was left with a broken neck’ after the beating.

During his 2018 arrest, Howell was described as ‘disabled’ and as somebody with a ‘juvenile disposition’.

One inmate said Tuesday he was a ‘good kid’ with the ‘mind of a 10-year-old boy.’

They claimed there was no way that Howell would have been able to defend himself.

In September 2018, Howell was arrested in West Palm Beach for stealing an $8 folding knife from a Home Depot, before heading to a nearby Target where he attempted to steal four phone chargers, worth a total of $60.

He was reportedly stopped by an employee, at which point he handed back two of the chargers.

Howell refused to give back the other two, and reportedly threatened: ‘I have a knife, man’.

He then took out the stolen folding knife from Home Depot and pointed the blade at the Target employee. 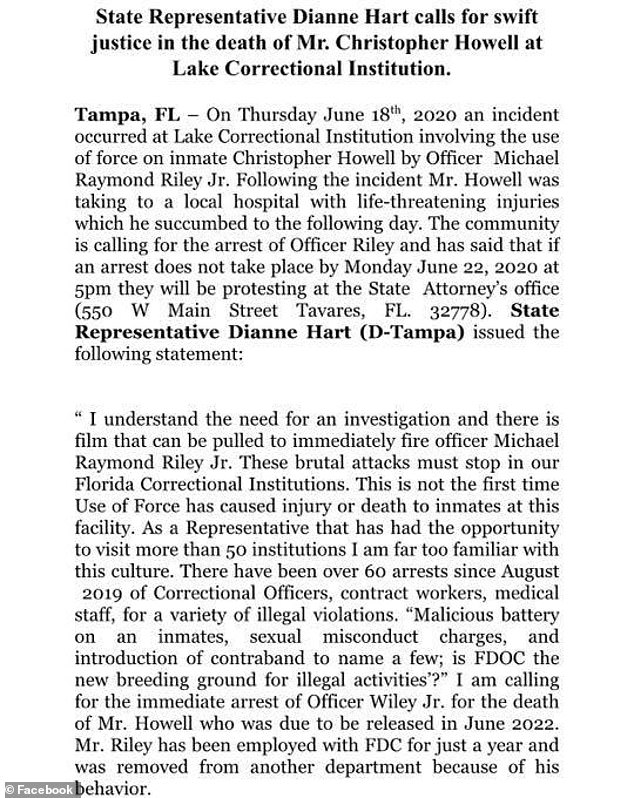 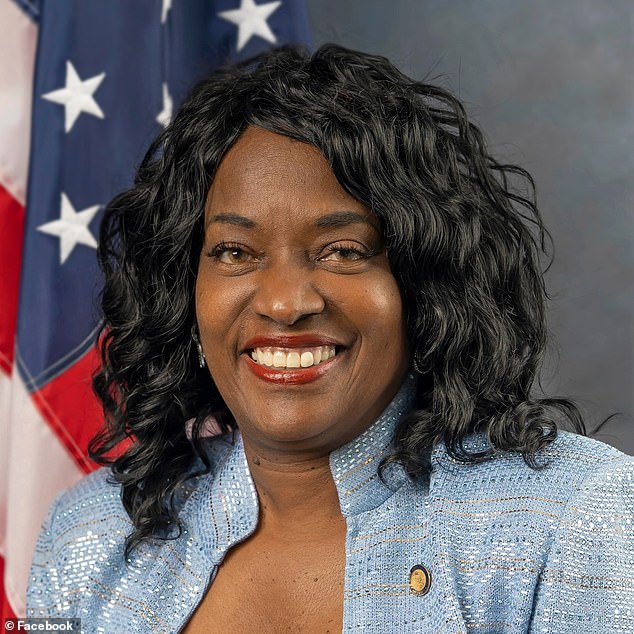 Rep. Hart (pictured) says the incidents are part of a trouble pattern affecting many correctional facilities across Florida

According to official records, Howell would have been eligible for release from Lake Correctional Institution in 2022.

It’s not the first time Lake Correctional Institution has been in the headlines for alleged violence at the hands of its employees.

Footage shared to YouTube last year was allegedly filmed inside the facility, and showed a group of officers taking it in turns to punch a prisoner in the head.

Meanwhile, other inmates told The Miami Herald that they had also been beaten inside the jail.

Rep. Hart says the incidents are part of a trouble pattern affecting many correctional facilities across Florida.

There have been over 60 arrests since August 2019 of correctional officers, contract workers, and medical staff for a variety of illegal activities including malicious battery on an inmate, sexual misconduct charges and introduction of contraband to name a few of the charges,’ she declared in her Facebook statement.

‘Is FDC the new breeding ground for illegal activities?’