The star of the Disney’s live-action remake of the beloved classic Lady and the Tramp is rescue dog who had been in and out of kill shelters before he landed his big break on the movie screen.

Monte is the adorable two-year-old terrier mix that stars as Tramp in the film. And it turns out the canine actor’s story of being on the streets and in shelters isn’t too different from that of his onscreen stray dog character.

Monte was on the verge of being euthanized at a kill shelter last year before he was rescued by HALO Animal Rescue in New Mexico then transferred to a shelter in Phoenix, according to People Magazine. 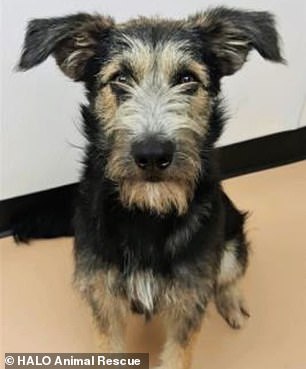 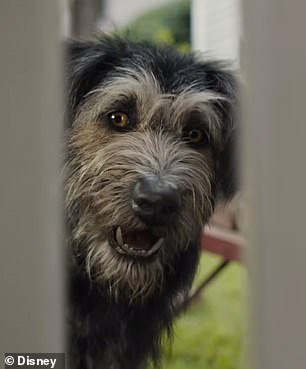 Monte’s backstory isn’t too different from that of his on screen street dog character Tramp. He was about to be euthanized at a kill shelter in New Mexico when he was rescued and adopted last year. Monte pictured left and pictured right in the CGI film as Tramp

That’s where Mark Forbes, the animal trainer for the film Lady and the Tramp, found him and saw potential in the pup.

Forbes adopted the dog, just seven days after HALO rescued him, trained him and had him audition in front of Disney executives, according to TMZ.

HALO made Forbes promise that Monte would be a family pet once the filming was over and wouldn’t return to the streets.

Now the pup enjoys the high life, from traipsing through Hollywood movie sets to his comfortable life at home with trainer Forbes and his family, which includes a newborn baby and a pet raccoon. 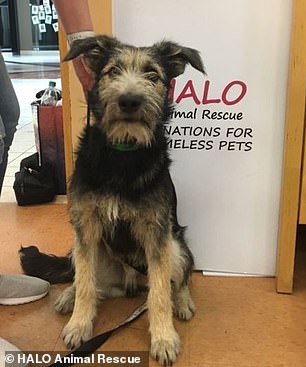 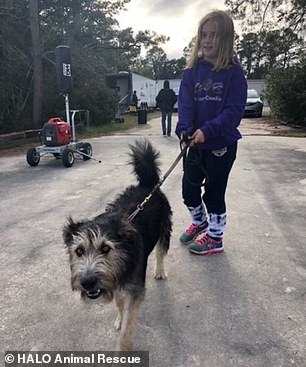 In 2018 Monte was adopted by Mark Forbes, the animal trainer for the Lady and the Tramp film, trained and auditioned before Disney execs for the film 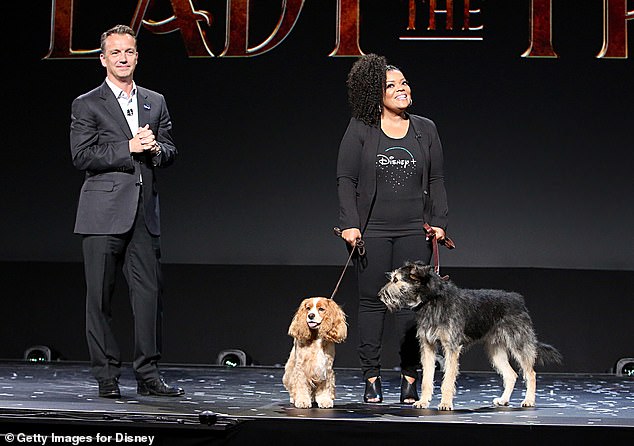 The dogs who play Lady and Tramp in the upcoming Disney remake pictured above making their big stage debut at the Disney+ showcase on Friday in Anaheim, California 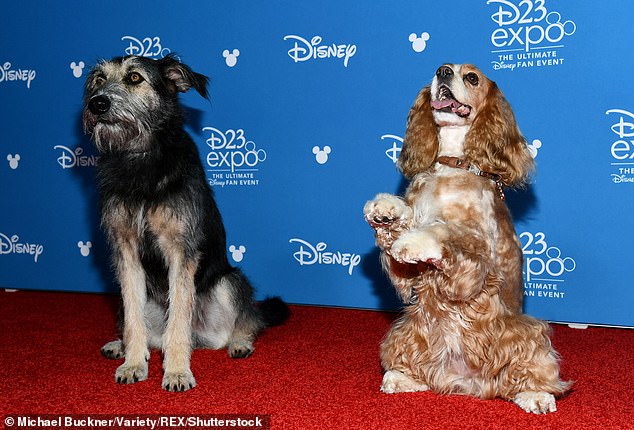 The star treatment! Monte pictured with his co-star Cocker Spaniel Rose on the red carpet on Friday at the Disney+ showcase in California 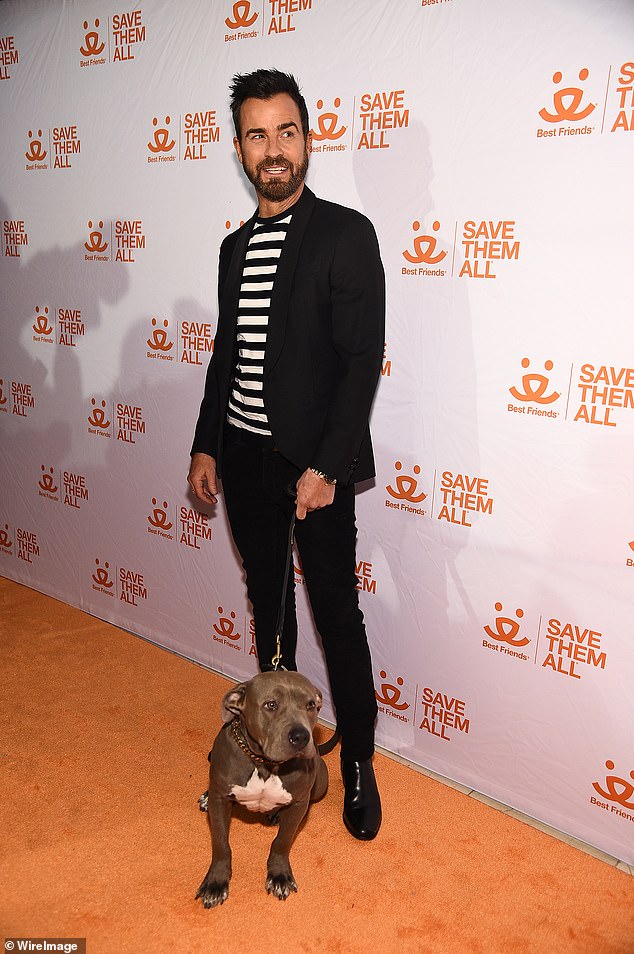 In the movie Tramp is voiced by actor Justin Theroux, who is an advocate for adopting rescue dogs. Pictured above with his rescue pup Kuma

HALO hopes his story will inspire people to adopt dogs in need of homes from shelters.

‘We have a celebrity dog in our midst! Check out Monte, he was adopted last year from HALO and originally came from Las Cruces, NM…His adopters say he’s been such a good boy and loving life. We are all so happy for him and can’t wait to check out the movie when it comes out,’ HALO wrote on Facebook. 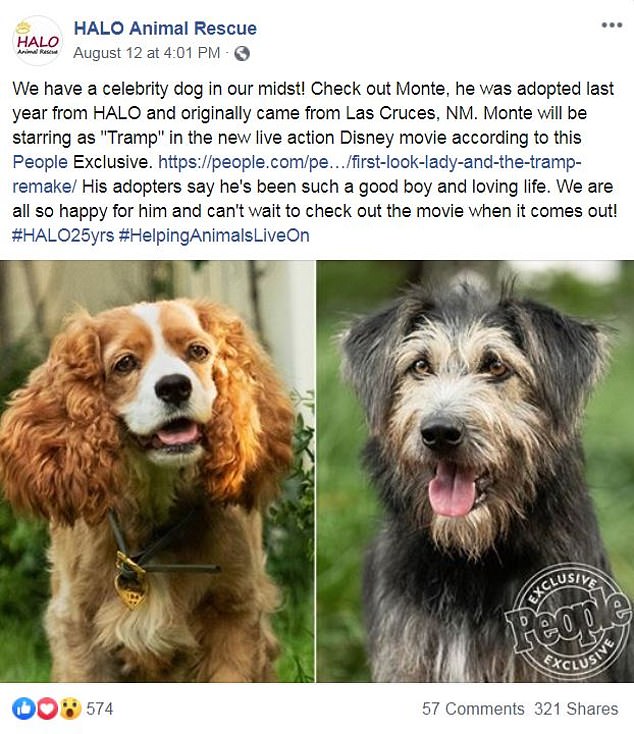 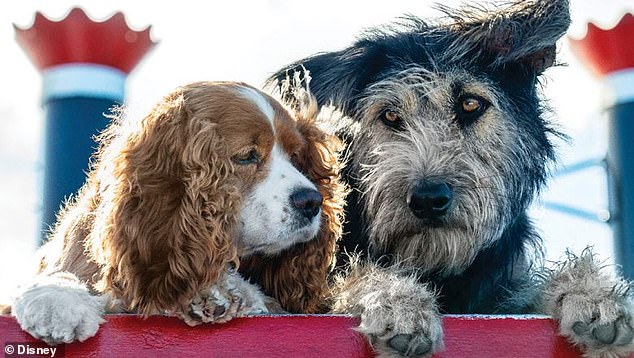 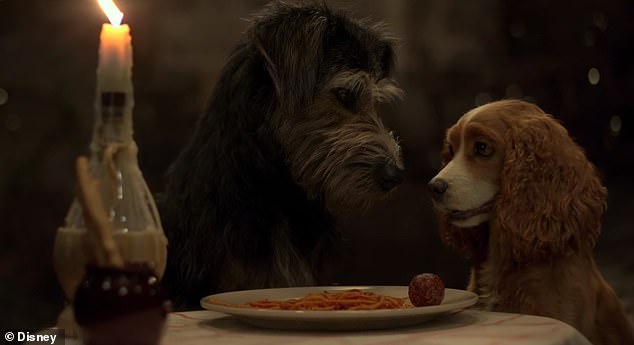 The Disney classic remake will launch on the Disney+ streaming service on November 12.

Tramp will be voiced by Justin Theroux in the film joined by actors like Janelle Monae, Sam Elliott and Benedict Wong.

The trailer for the highly anticipated film was released Friday and uses several beloved moments from he original 1955 film, including the iconic plate of spaghetti, Lady being presented in an elaborate gift box as a puppy and her owners attempting to train her by keeping her on newspaper.