After an exhaustingly absurd 18 innings, the Dodgers pulled off a 3-2 victory over the Red Sox early Saturday morning in what was the longest World Series game in history.

Seven hours and 20 minutes into Game 3 of the Series, Los Angeles’ Max Muncy hit a home run in the bottom of the 18th inning, bringing the remaining loyal fans in Dodger Stadium to their feet at 12.30am.

‘The feeling was just pure joy and incredible excitement,’ a grinning Muncy said after the game.

The Dodgers mobbed Muncy at home plate, celebrating the solo shot that pulled them back from the brink of a potential 3-0 Series deficit that no team has ever recovered from.

The win cut Boston’s lead in the best-of-seven matchup to 2-1 going into Game 4 on Saturday night. 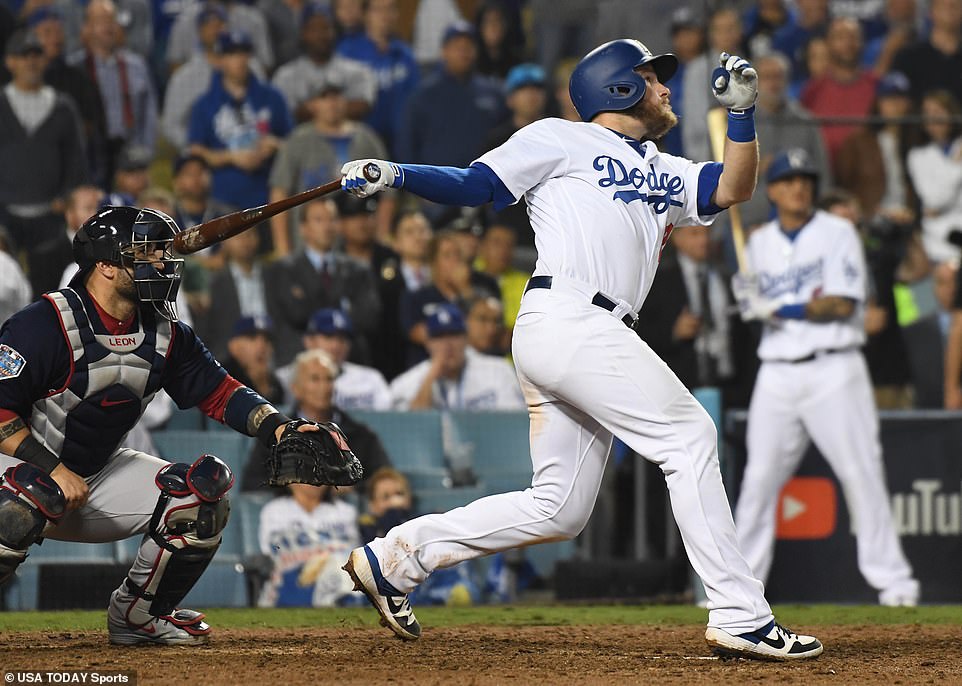 Muncy watches his walk off home run fly through Dodger Stadium during the bottom of the 18th inning at 12.30am Saturday 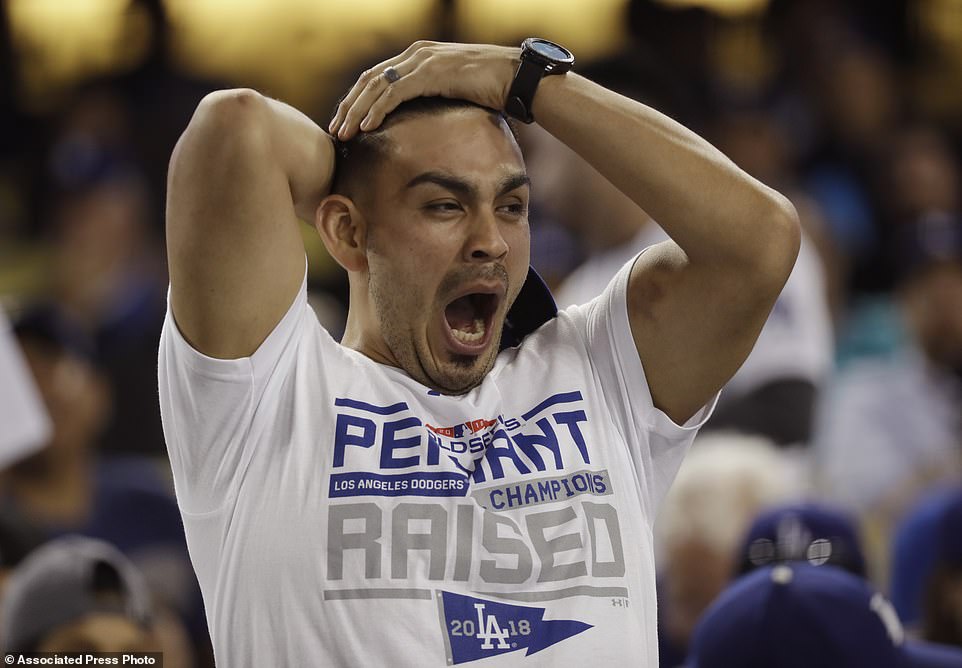 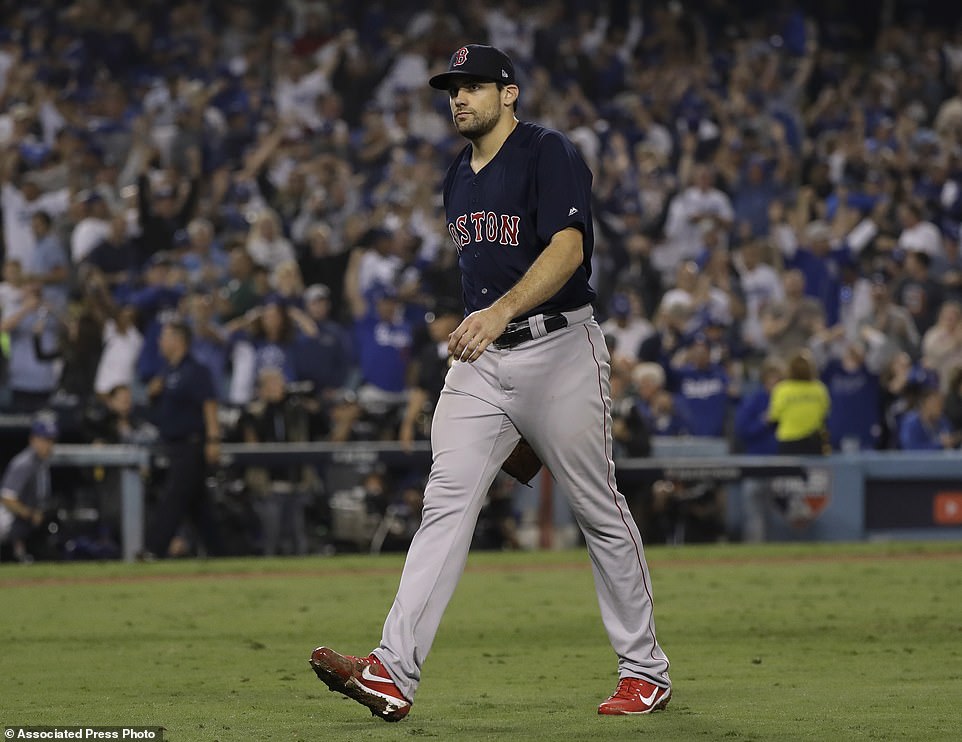 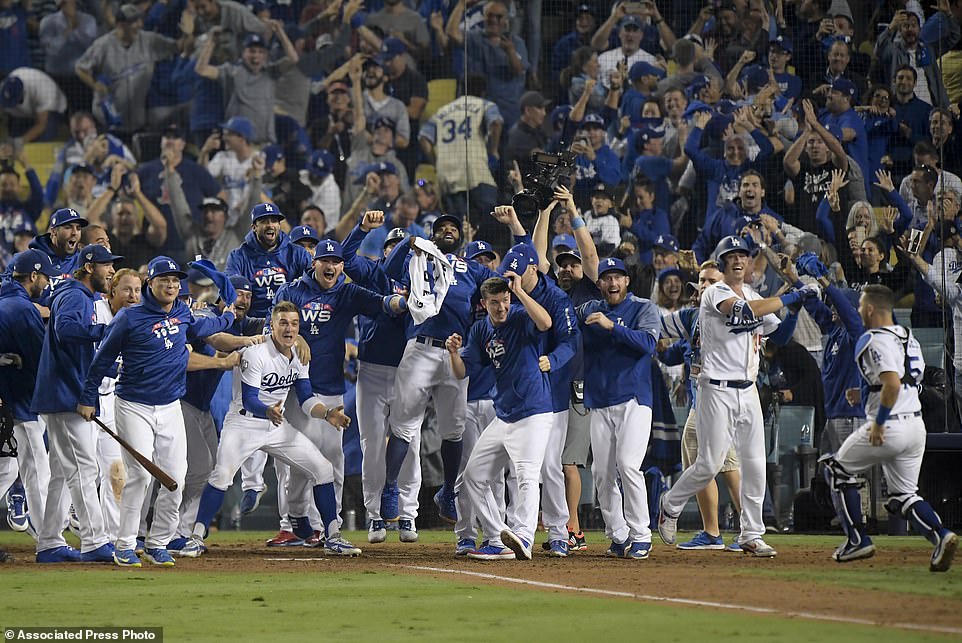 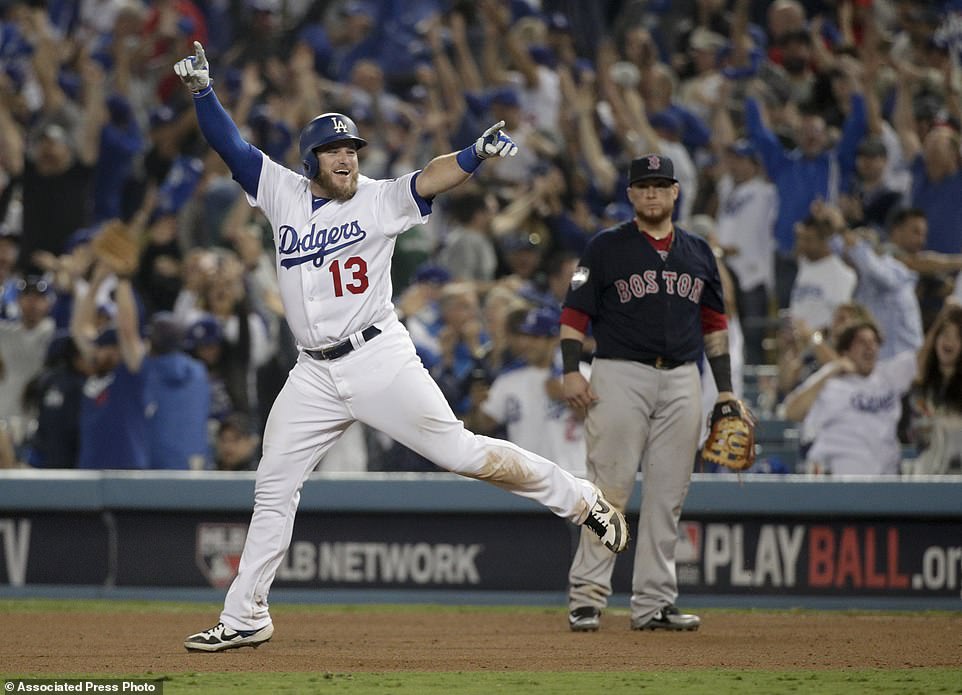 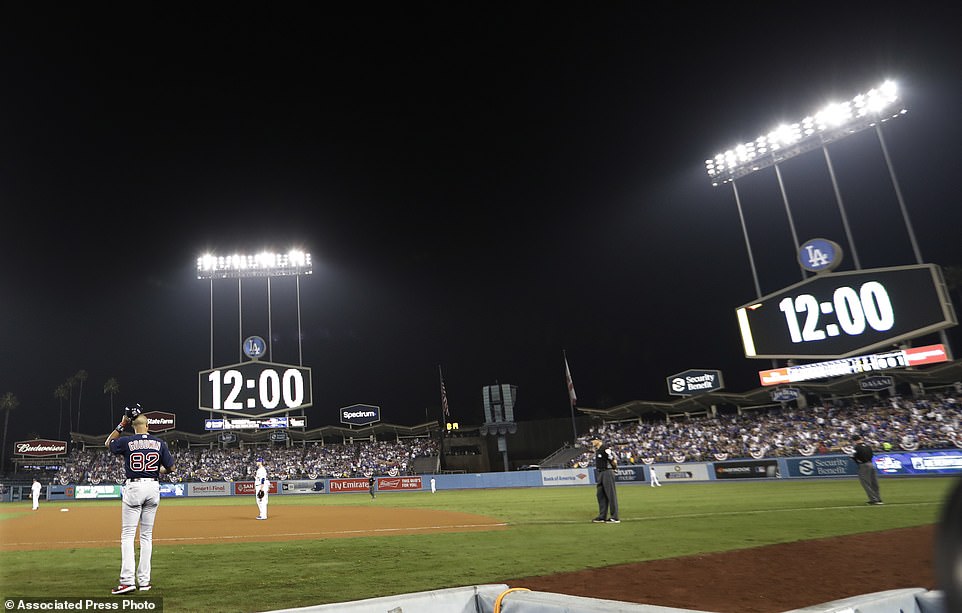 ‘Had the last out in my glove and couldn’t get it over there. It’s tough to swallow,’ Kinsler said.

‘I feel like I let the team down right there,’ he said.

‘We had some situations that we could have put them away and then we didn’t. And at the end we paid the price.’

Evoking memories of Kirk Gibson’s winning pinch-hit homer in Game 1 of the 1988 World Series, Muncy came within feet of ending it in the bottom of the 15th. But his shot to right sailed just foul and he ended up striking out.

‘I really thought I had it,’ Muncy said. ‘That was kind of defeating at that point, but I was able to get back and get another shot.’

The battle of attrition had a bit of everything: 46 players, including 18 pitchers, and 561 pitches. Never before had a Series game gone more than 14 innings.

Two games in one, really. And a fall classic, indeed.

‘It was a must-win for us. Our guys just persevered,’ Dodgers manager Dave Roberts said.

How long did they play? Put it this way: The game took 15 minutes more than the entire 1939 World Series when the Yankees swept Cincinnati, STATS said.

Long after rookie Walker Buehler dazzled over seven shutout innings for the Dodgers, things got interesting. 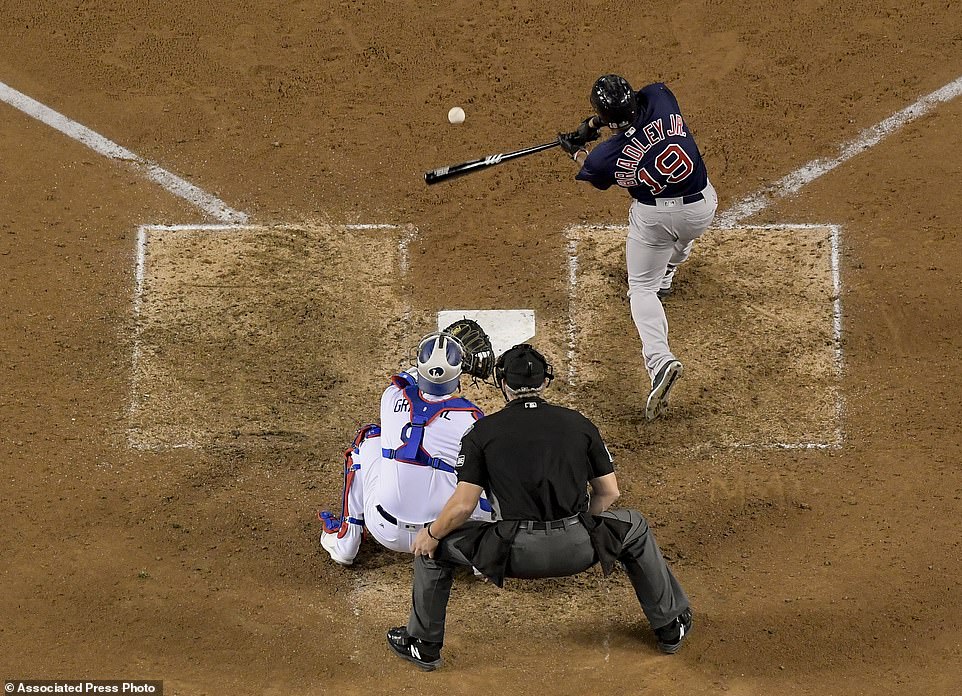 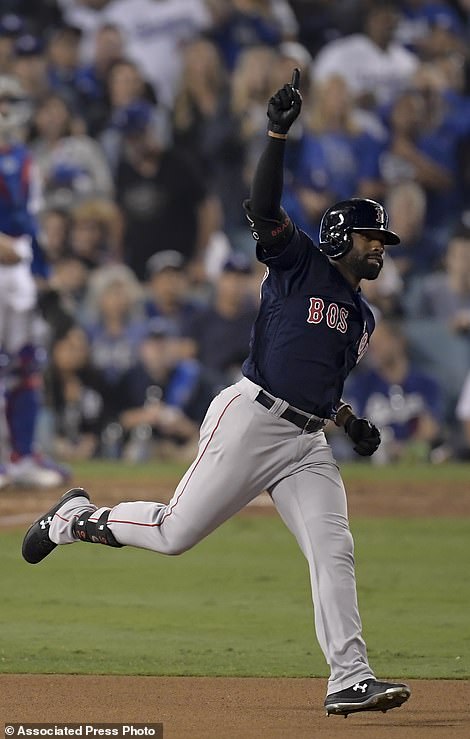 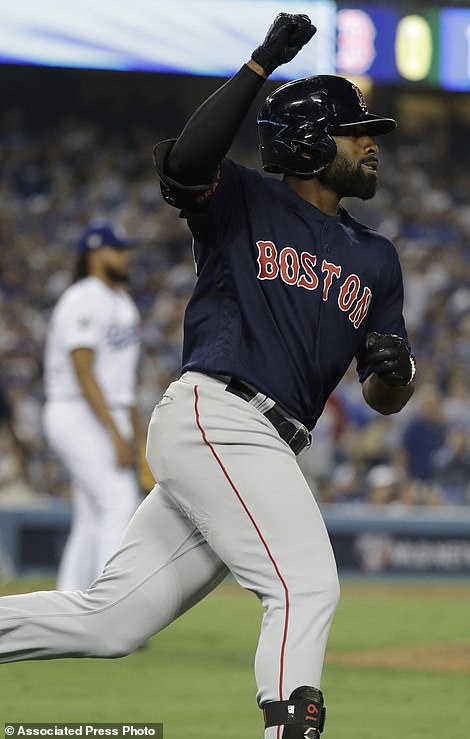 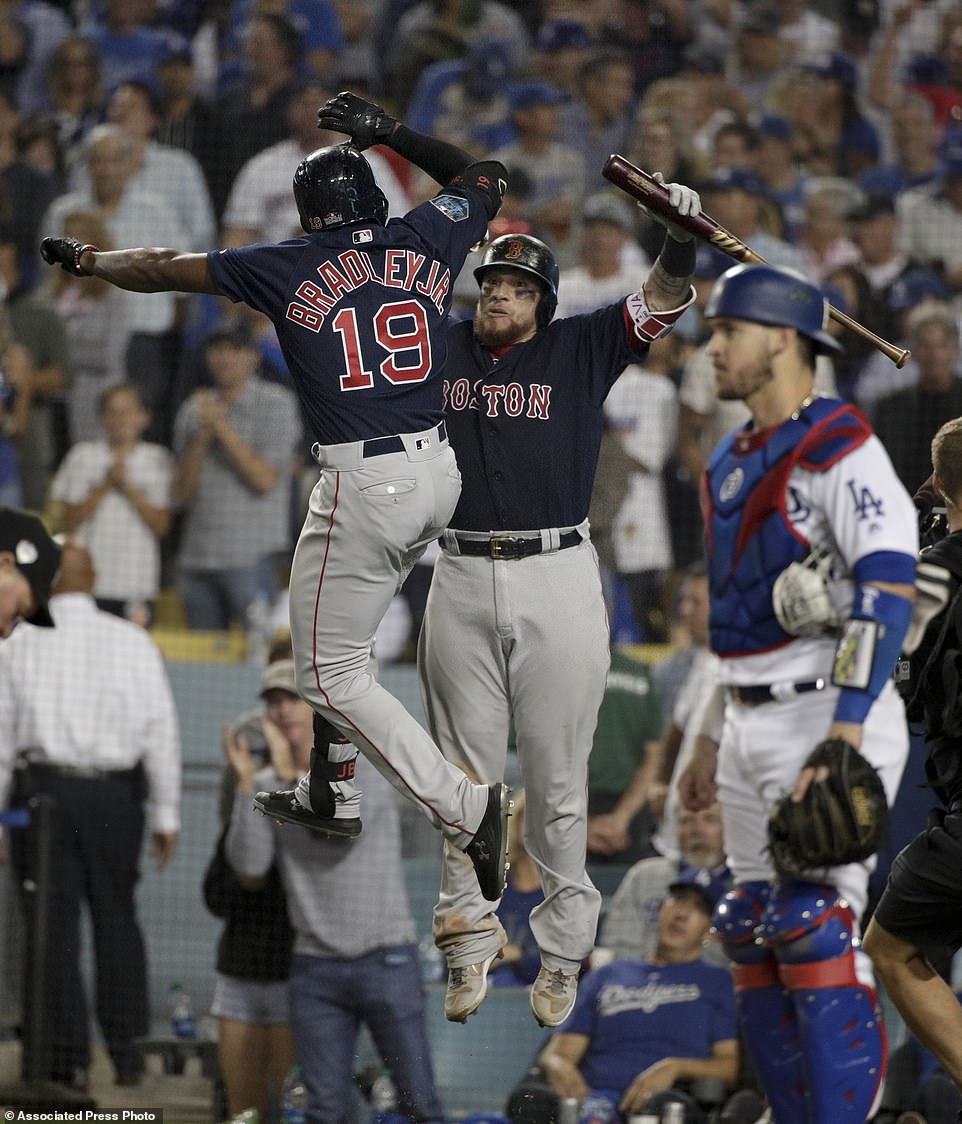 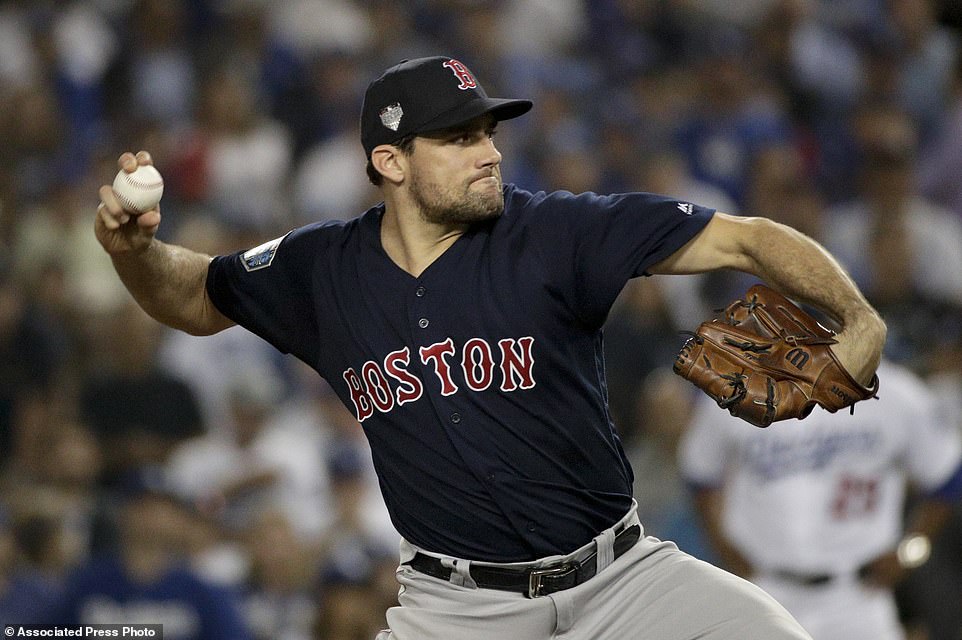 Los Angeles answered with the tying run in the bottom of the inning.

After Dodgers center fielder Cody Bellinger made the throw of his life in the 10th, both teams scored on bizarre errors in the 13th.

Cora used starter David Price in relief, rotated his outfielders in the middle of innings and even put catcher Christian Vazquez at first base for the first time in his big league career.

Out of position players, Roberts called on ace Clayton Kershaw to pinch-hit in the 17th. He flied out.

The stadium organist was busy, too, launching into ‘Take Me Out to the Ball Game’ in the 14th inning – a second version of the seventh-inning stretch. Not many had left by then.

The crowd cheered when the stadium clock struck midnight.

‘What a ballgame. What a marathon,’ Dodgers third baseman Justin Turner said. ‘Unbelievable fight from our club.’

‘I think my beard got about 3 inches longer.’ 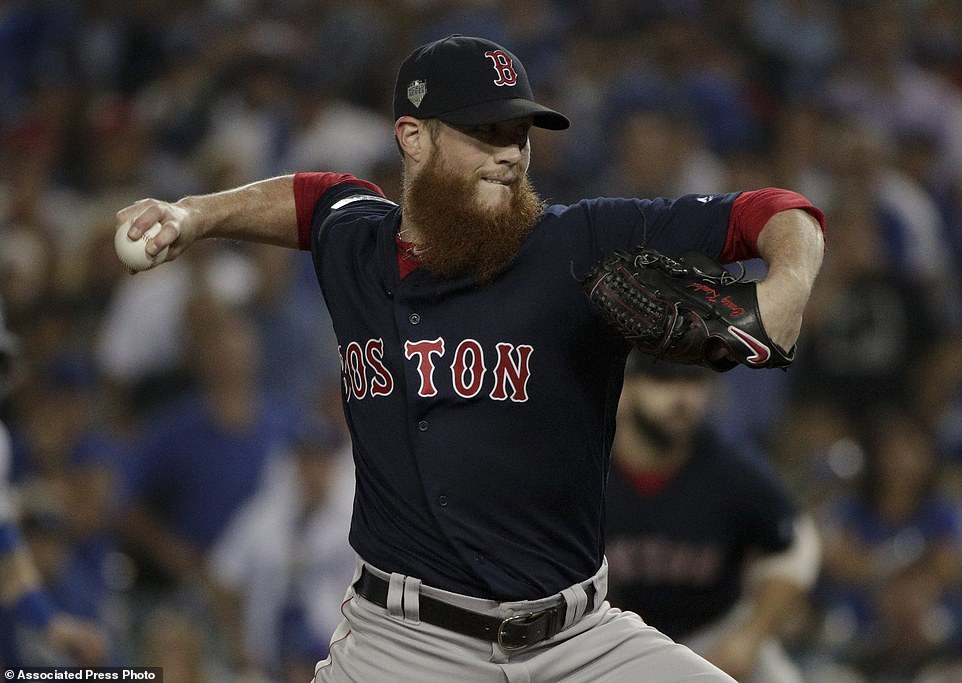 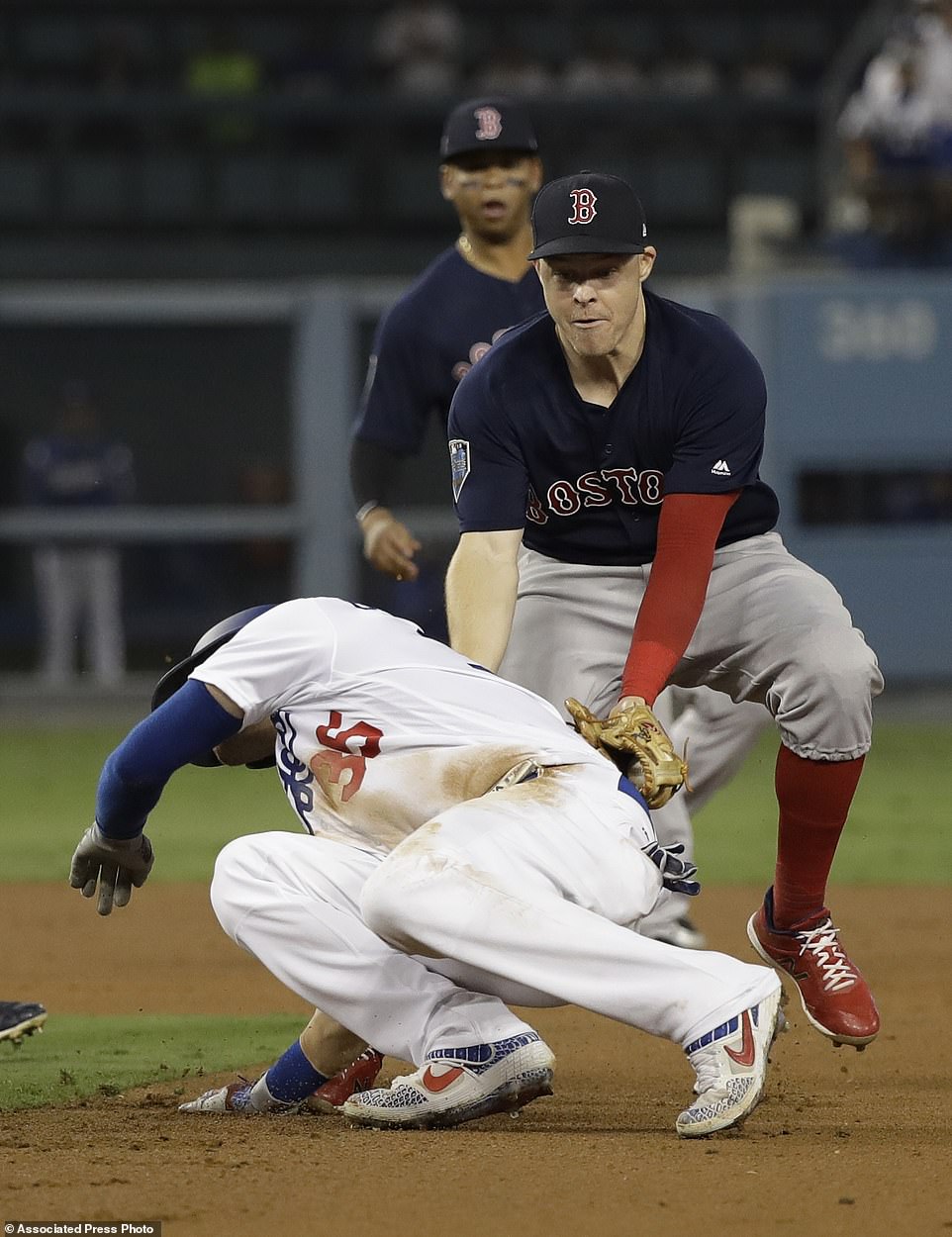 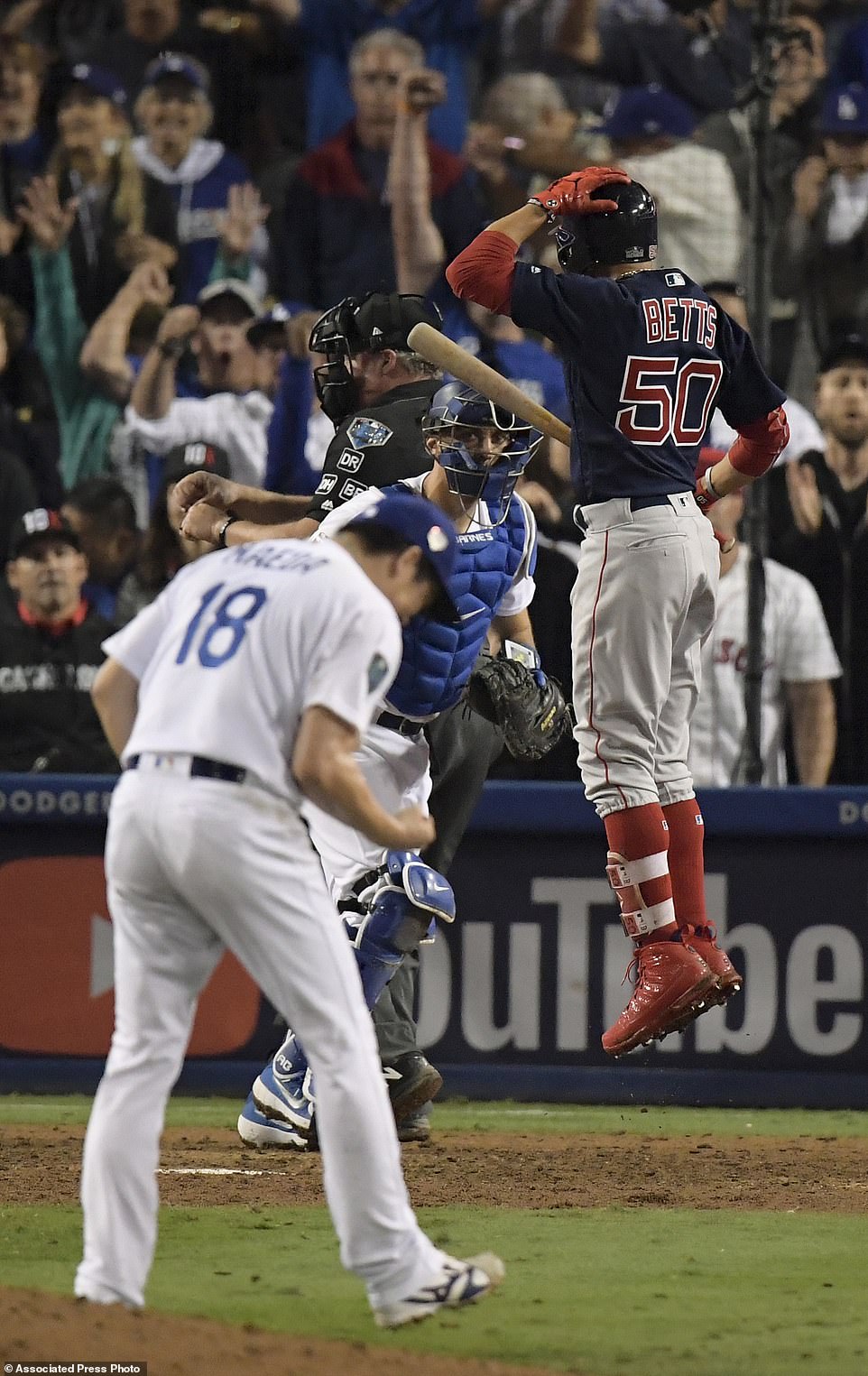 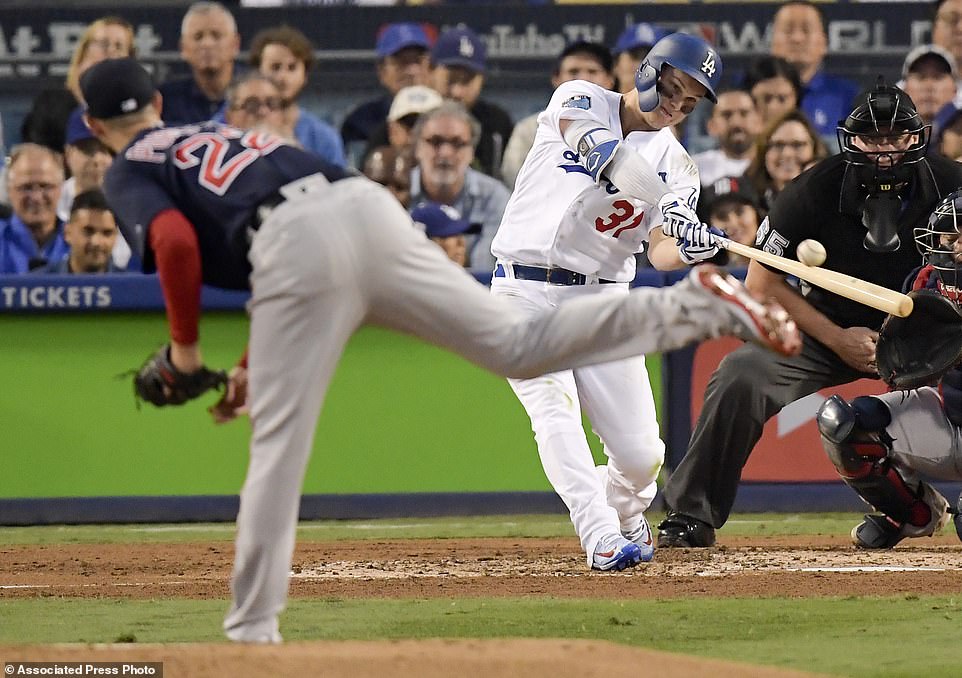 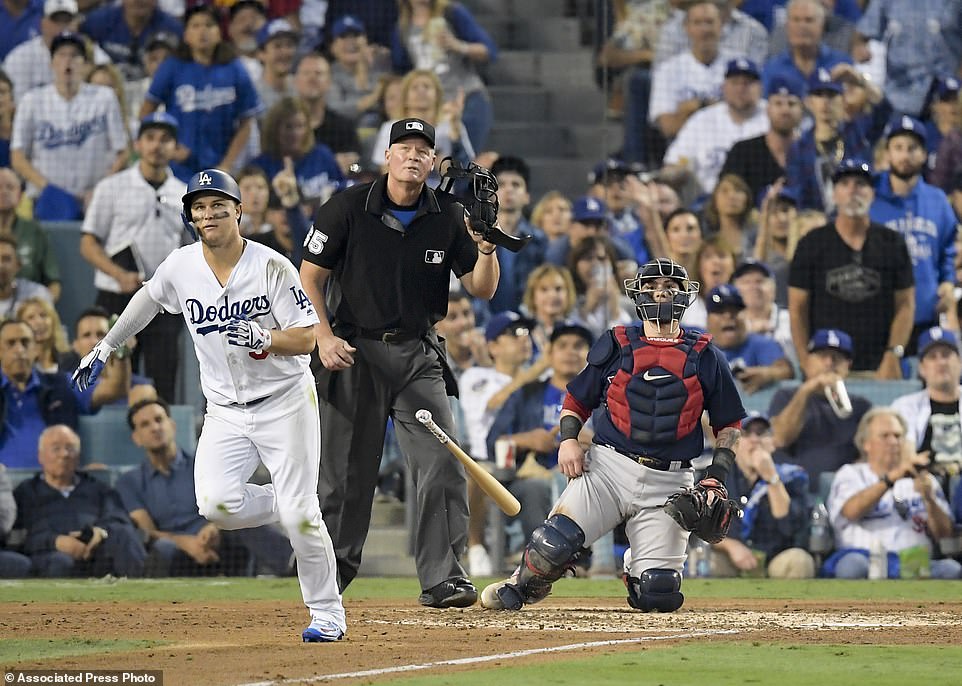 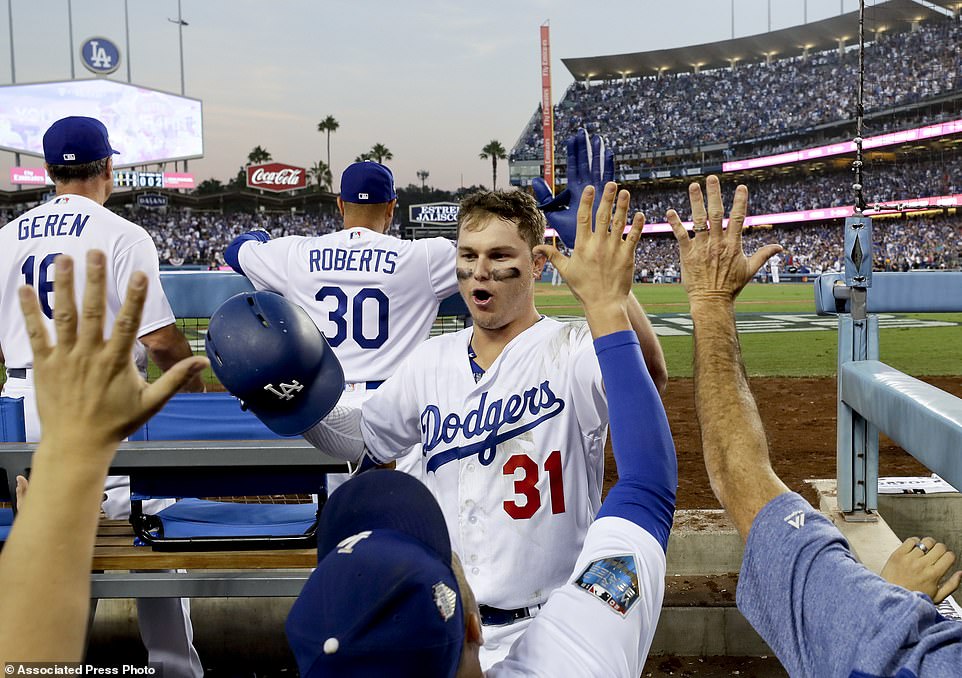 The Dodgers snacked on peanut butter and banana sandwiches whipped up by a team employee, and hung a bag of bananas over the dugout railing to change their luck.

‘We were well-fueled,’ Kershaw said.

Pitcher Nathan Eovaldi had been scheduled to start for the Red Sox, but he threw 97 pitches over six-plus innings in relief as one of nine pitchers they used. The Dodgers backtracked on Rich Hill and said they would announce a starter later.

‘I’m a little tired, but we’re ready to come back tomorrow,’ Los Angles slugger Yasiel Puig said, looking at his watch and adding, ‘in a couple of hours.’

The Red Sox had a wild 13th with a walk, a steal, an infield hit and an error before taking a 2-1 lead.

Brock Holt drew a leadoff walk and stole second. Pinch-hitter Eduardo Nunez got flipped on his back by catcher Austin Barnes as he chased Scott Alexander’s wild pitch.

Nunez then reached on a nubber to the right side and Alexander bungled the toss to first, allowing Holt to score. Nunez got knocked on his back again on the play at first, but stayed in the game as Boston had no one left on its bench. 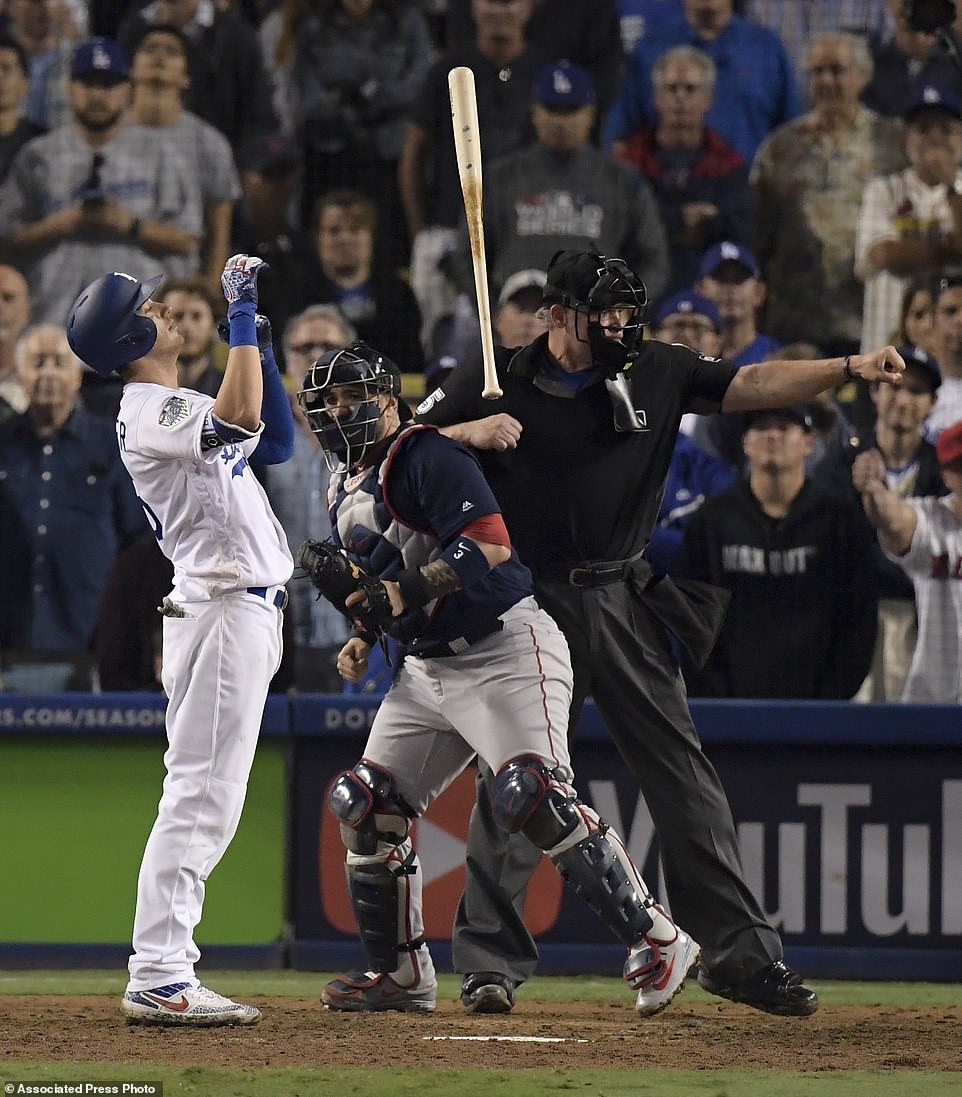 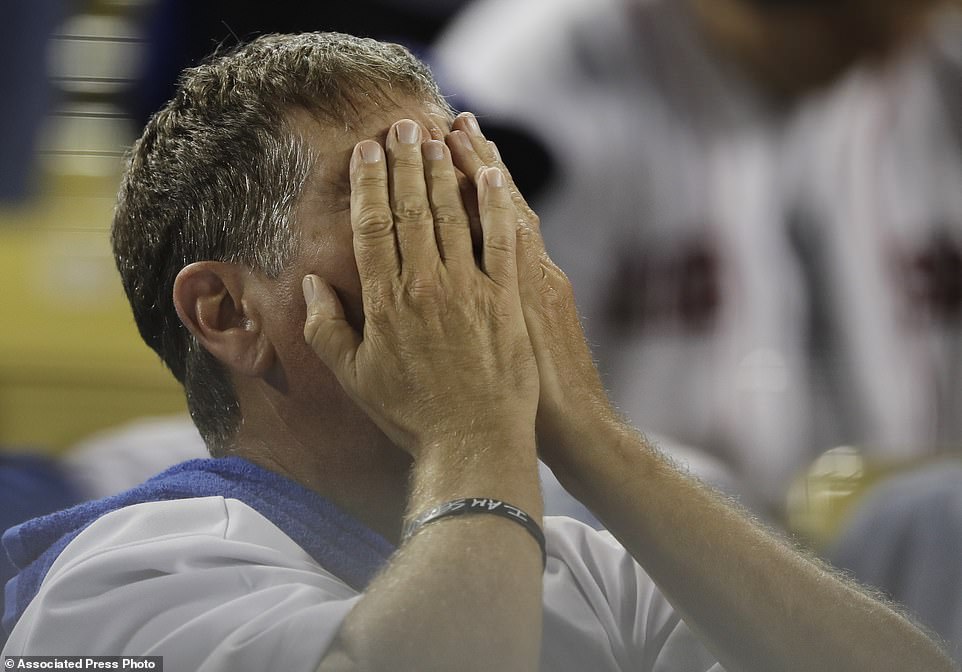 The Dodgers tied it 2-all in the bottom of the 13th. Muncy drew a leadoff walk and tagged up when Nunez tumbled into the third base stands after catching Bellinger’s pop foul. Muncy scored when Kinsler botched the throw to first on Puig’s infield single.

Bradley Jr. tied it at 1 with a drive off closer Kenley Jansen in the eighth.

The Dodgers led 1-0 on Joc Pederson’s two-out homer in the third.

Both teams squandered numerous chances. The Red Sox stranded runners in the 10th and 11th. The Dodgers left runners on in every inning from the fifth to the 11th.

Boston had runners at the corners in the 10th. Pedro Baez walked J.D. Martinez with one out and took third on Holt’s single to center.

Bellinger started a sensational, inning-ending double play from center field, catching Nunez’s pinch-hit fly and then firing to catcher Austin Barnes a few feet up the third-base line. Barnes made the tag as Kinsler came barreling past and both players tumbled to the dirt. 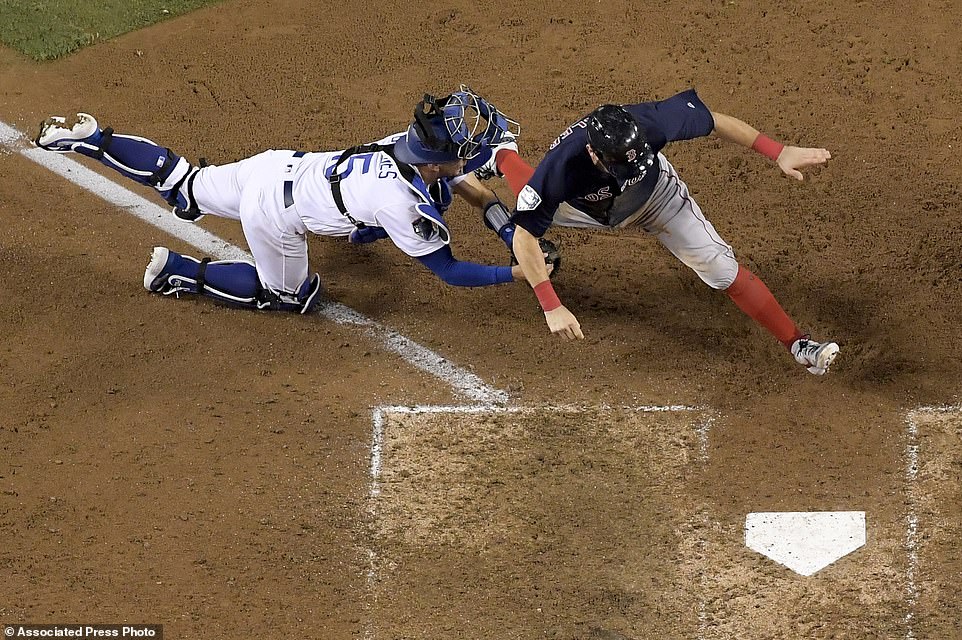 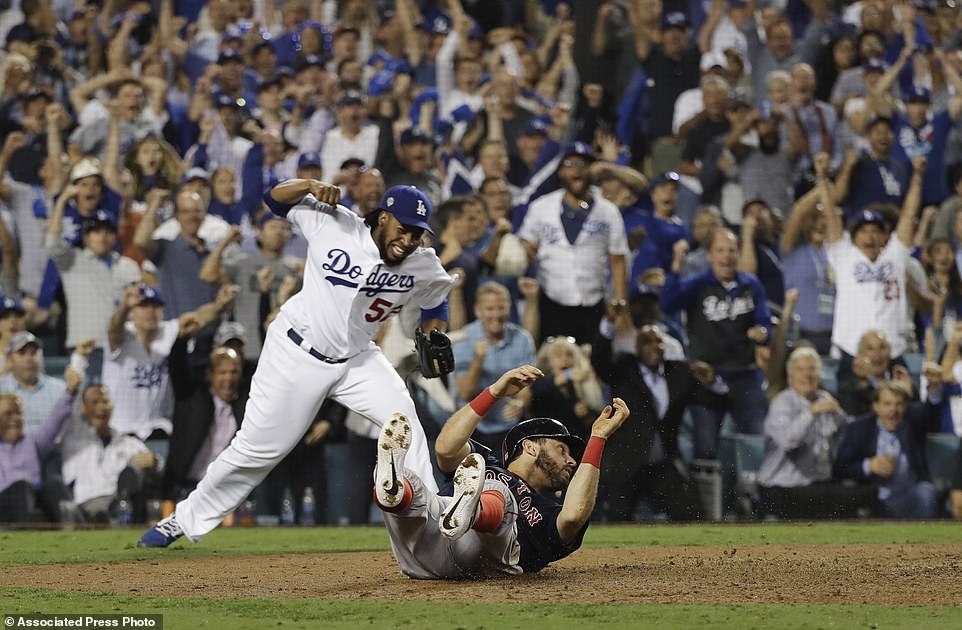 The game began in 78-degree heat – 31 degrees warmer than at Fenway Park for the first two games.

Buehler stymied the Red Sox through seven innings. The right-hander retired his final 14 batters before leaving after 108 pitches. He allowed two hits, struck out seven and didn’t walk anyone.

‘He’s got an overt confidence, a quiet confidence, a little combo,’ Roberts said. ‘But he’s got tremendous stuff, and he lives for moments like this.’

Boston starter Rick Porcello gave up one run and three hits in 4 2/3 innings. He struck out five and walked one.

Alex Wood threw a hitless inning for the win.

Previously, the longest postseason game by time was San Francisco’s 18-inning win over Washington that took 6 hours, 23 minutes, during the 2014 NL Division Series. The only other playoff game to last 18 innings was Houston’s victory over Atlanta in the 2005 NLDS.

The Red Sox had won six straight games, starting in the ALCS. They had been 5-0 on the road this postseason.

Dodgers: After the game, the team said its starter would be announced later. Left-hander Rich Hill had been set to go. 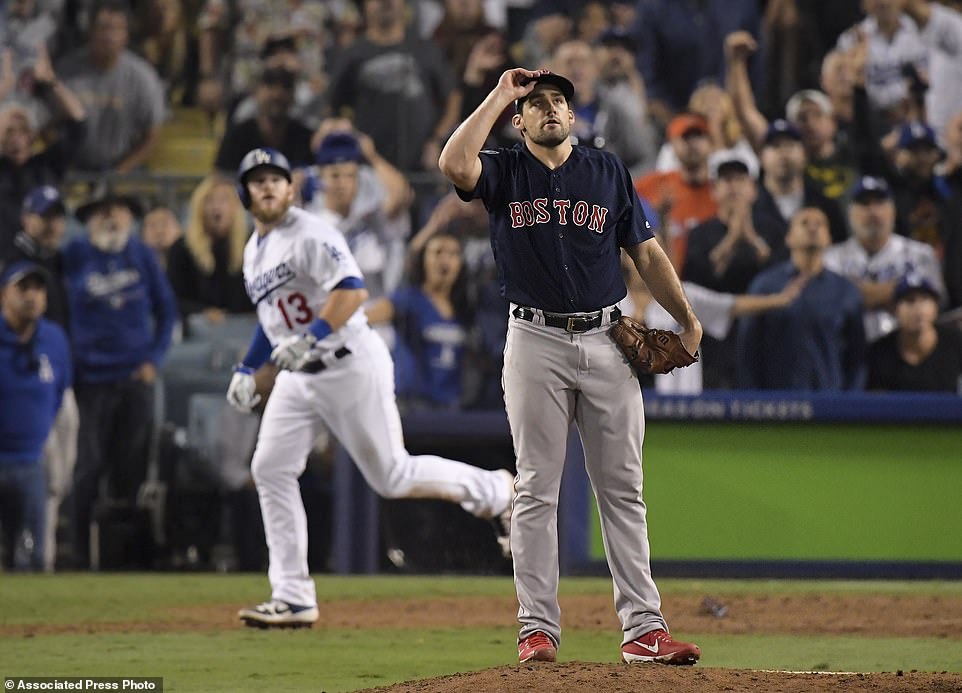 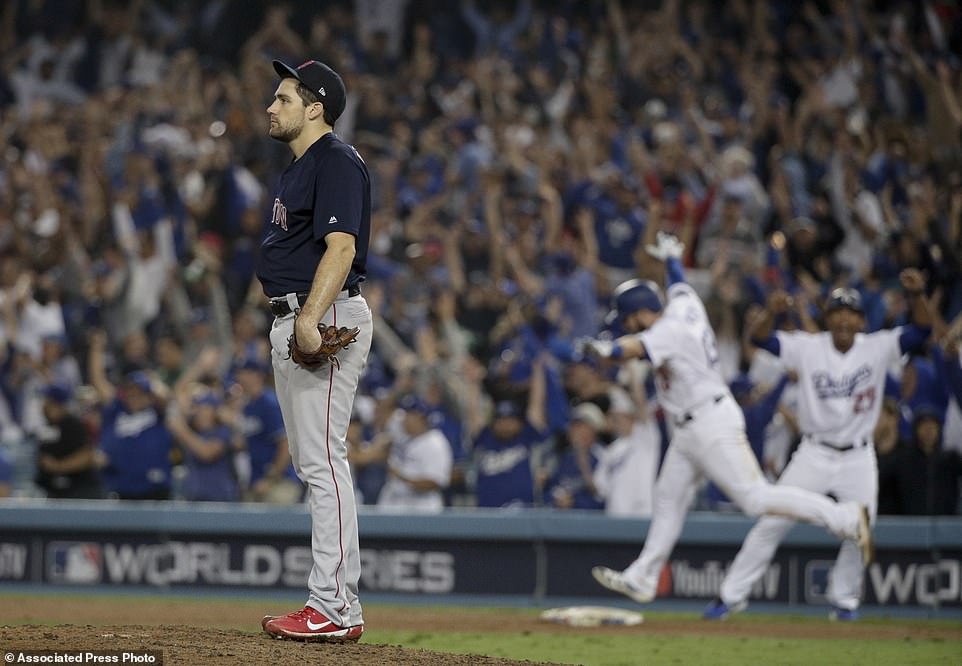 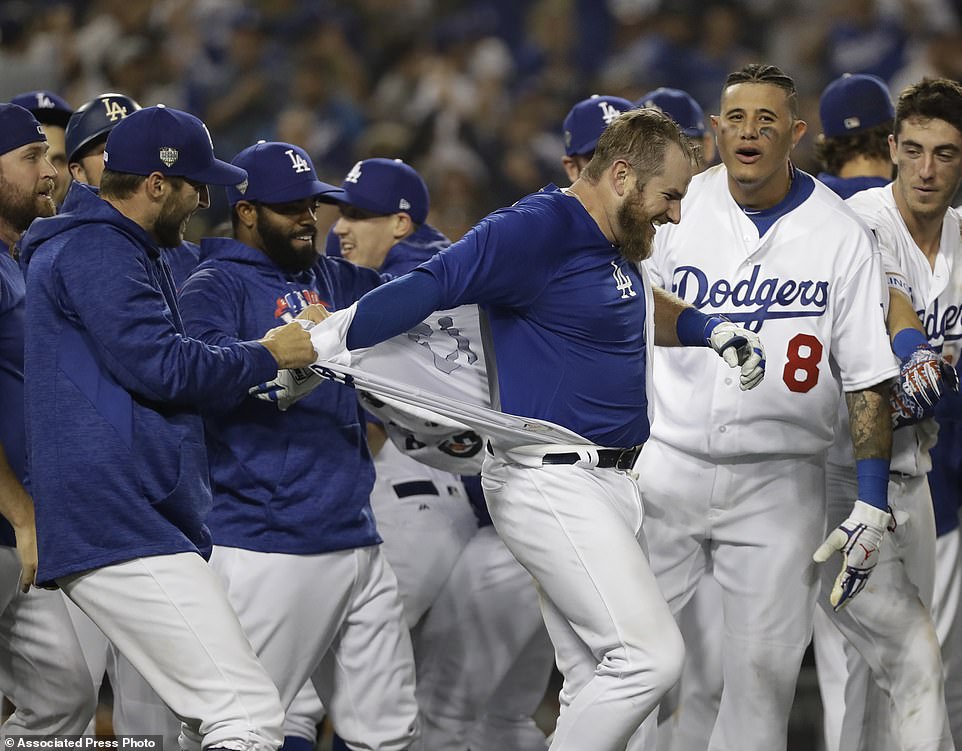 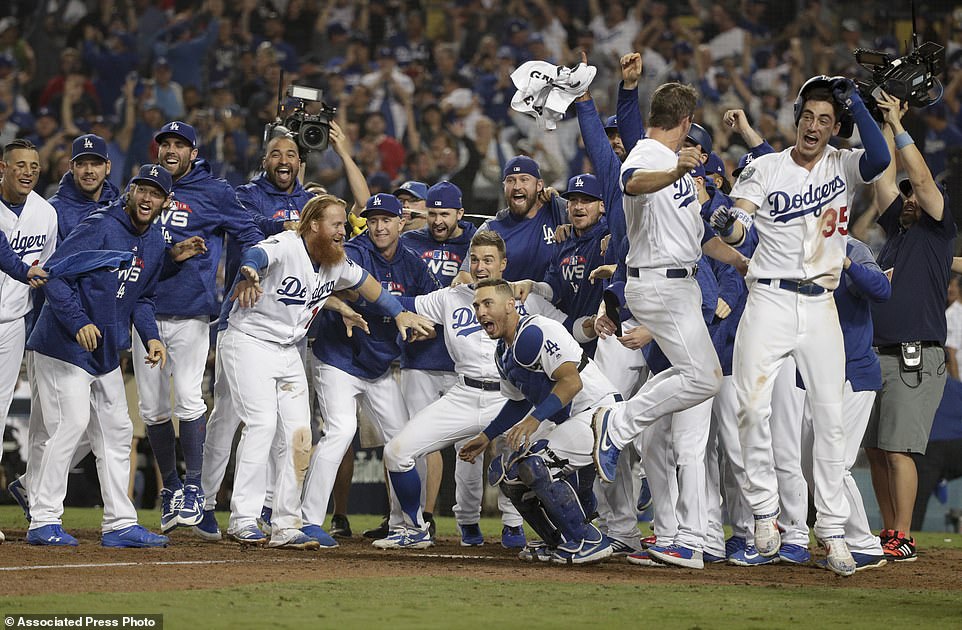 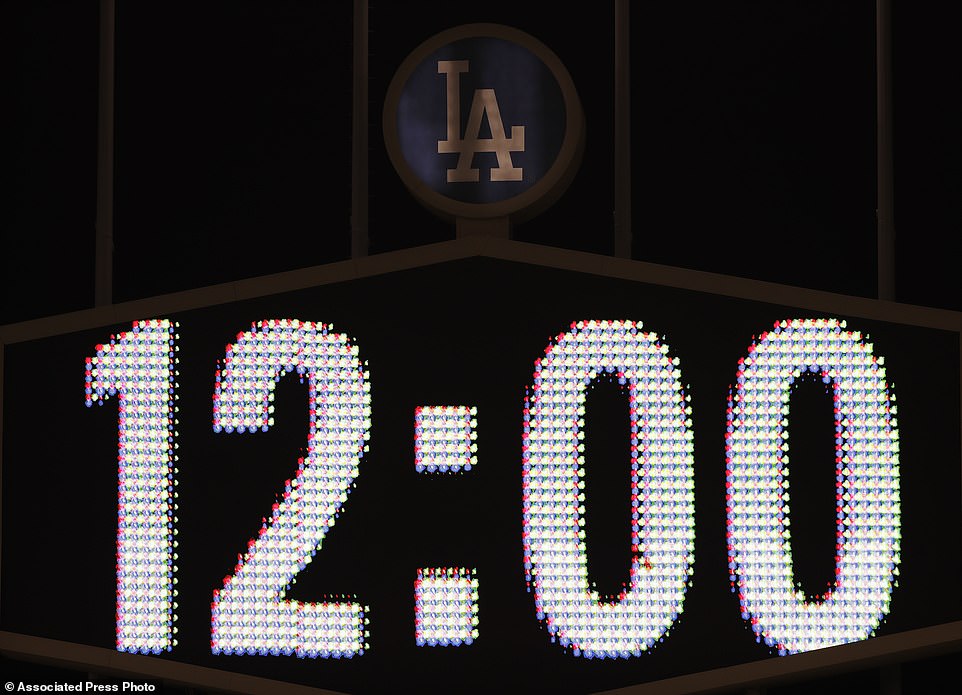