Are you really going to eat all that? Dog gives a ‘human’ scowl of disapproval as it eyes up owner’s Pop-Tart

A cheeky dog has shown off his own unique way of charming his owner into gibing him snacks.

Kayla Klear’s pooch Shiloh has a face which boasts an uncanny resemblance to a human’s when giving a suspicious look.

Video filmed at their home Hudson, Florida, shows the chihuahua-mix pup eyeing up a pop tart and pulling the face in the hope of making Kayla laugh and share the food. 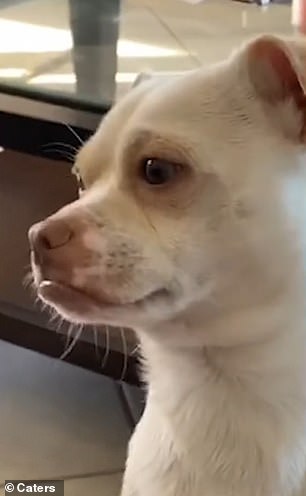 Unimpressed! Shiloh puts on a grumpy expression to his owner at their home Hudson, Florida (left). The pooch momentarily distracted and turns to the side (right)

Shiloh is seen standing on his hind legs with one paw resting on the sofa and the other on Kayla’s leg all while pulling a funny face and keeping his ears folded down.

The pup appears to be squinting his eyes as he stares at Kayla and turning down his lips to look like he’s frowning.

After a few seconds he is momentarily distracted and turns to the side, but soon refocuses on his amused owner who is heard giggling on the footage.

Once Shiloh realises that Kayla isn’t budging on the pop tart, he gets all four paws back on the floor but continues to stare. 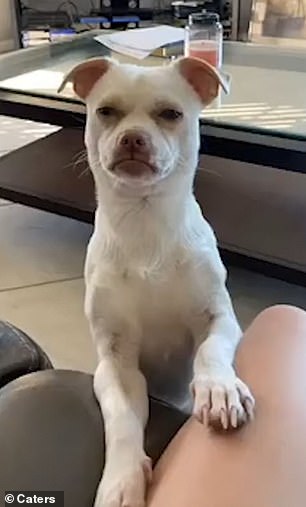 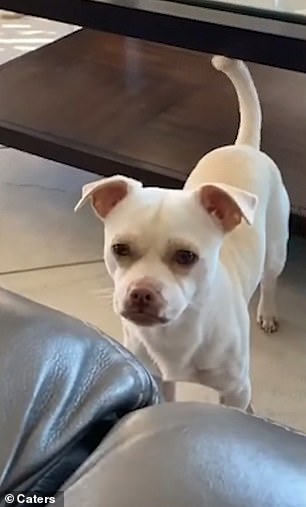 The pup appears to be squinting his eyes as he stares at Kayla and turning down his lips to look like he’s frowning (left). The chihuahua-mix pup appears to show no sign of giving up on a snack (right)

The dog is clearly not happy with his lack of snacks and makes sure not to lose eye contact with Kayla for a few more seconds.

Kayla then zooms in on Shiloh, showing his funny face and unimpressed expression up close, as she continues to laugh at his antics.

Despite being unsuccessful this time, Kayla said she usually gives in to her pups demands especially when he pulls the hilarious expression.