Don Trump Jr. makes fun of his dad by calling him ORANGE as he highlights the lack of diversity among Democratic presidential candidates

Don Trump Jr has joked that his father is orange, in a post mocking the Democratic presidential primary field for lacking diversity.

‘How much less diverse is the 2020 Dem field from the 2016 GOP field?’ read the humorous image the president’s son shared to Instagram on Wednesday.

Images below show Democrats at Tuesday night’s debate, labeling them all ‘white.’

The ‘diverse’ Republicans are then listed out, including Donald Trump, who is labeled ‘orange.’

‘Ok I had to… ORANGE!!!’ Trump Jr wrote in a comment to the post, adding laughing-crying emojis. 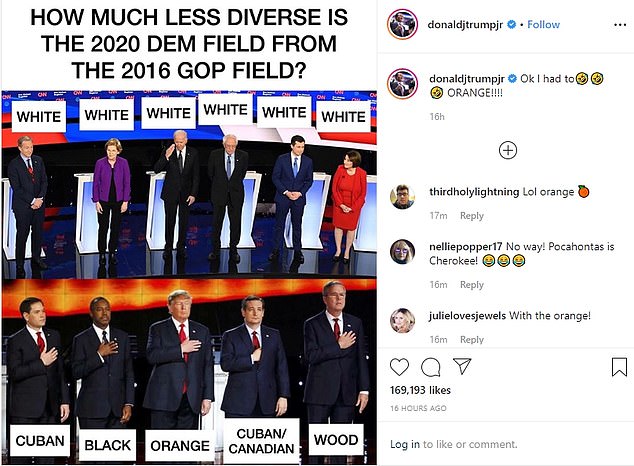 The joke also describes the heritage of some of the other 2016 Republicans: Cuban Marco Rubio, black Ben Carson, and Cuban/Canadian Ted Cruz, who was born in Calgary.

Trump himself has also previously joked about his skin tone, saying in September that energy-saving light bulbs make him ‘always look orange.’

The Washington Post responded with an in-depth article interviewing experts from numerous fields, who argued that lighting was not responsible for the president’s skin tone. 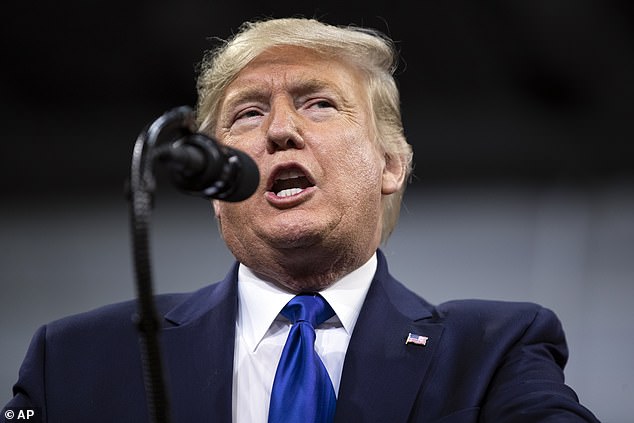 Trump himself has also previously joked about his skin tone, saying in September that energy-saving light bulbs make him ‘always look orange’

The investigation concluded that atypically heavy application of bronzer, or perhaps artificial tanner, was likely the cause of Trump’s hue.

The White House has previously said that the president’s glow is due to ‘good genes’ as well as light powder application before TV appearances.

Trump reportedly prefers to apply his own makeup, in private, and has refused the services of a taxpayer-funded White House makeup artist.