Trump Jr. says Mueller was nothing more than a ‘figurehead’ for the report which he ‘knew nothing about’ and hired ’19 leftist Hillary Clinton donor lawyers’ to handle it

Donald Trump Jr has blasted former special counsel Robert Mueller saying he was just a figurehead of the Russia investigation that was run by ’19 leftist Hillary Clinton donor lawyers’.

President Trump’s eldest son claims Mueller’s high-stakes testimony in Congress on Wednesday revealed he had no idea what was going on in the Russia probe and that he was simply a figurehead.

Don Jr also argued during an appearance on Fox News’ Tucker Carlson Tonight on Thursday that Mueller’s probe was set up to undermine his father and the Trump administration.

‘I think the American people finally saw it. This man who was the lead of the largest investigation in American history – really the largest hoax at this point – he didn’t have a fundamental understanding of not only where it began, but what was even involved,’ Don Jr. said. 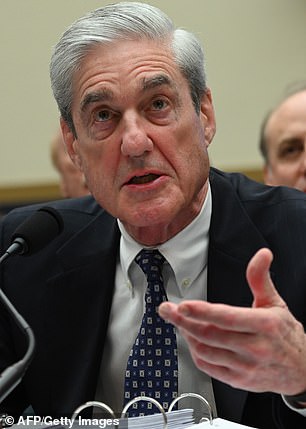 ‘I think the American people saw that he was put in there as a figurehead because he was the former leader of the FBI, he was a decorated Marine and that he would do what’s right.’

He went on to suggest that Mueller wasn’t the real leader in the investigation and that he hired a group of lawyers to handle it.

‘The inmates were running the asylum and those inmates were the Democrat party who were doing whatever they could to destroy my father’s presidency because they see that he’s actually getting things done.’

Don Jr said the investigation was never about trying to find out what happened but to get the result they wanted.

‘They couldn’t do that because there was nothing there,’ he said. 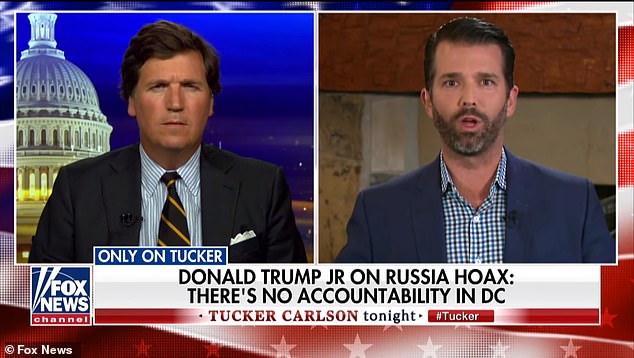 ‘This was a hoax set up by the Democrats from moment number one.’

Another tweet read: ‘Today was a great win for my father, Republicans, and all Americans. Hopefully now Democrats can move on from this hoax and actually start working for the American people.’

It comes after President Trump declared that Mueller’s testimony had been a win for the White House and a ‘disaster’ for his Democratic opponents.

‘We had a very good day today,’ Trump told reporters, once more slamming the investigation into Russian election meddling as a ‘witch hunt’.

‘There was no defense to this ridiculous hoax.

During seven hours of nationally-televised hearings, Mueller strongly denied Trump’s charge that his two-year investigation was a ‘witch hunt’ led by anti-Trump Democrats.