They say the holidays are a time for coming together and forgetting the past, and that apparently extends to the Trump administration clan.

A number of Donald Trump’s former officials – some of whom have been fired by the president himself – were in attendance at the White House Christmas Party on Monday night.

And the looming Mueller investigation – which has landed a number of Trump’s associates in jail – seemed to be the farthest thing from everyone’s minds as they posed for photos together and enjoyed the night.

Former White House Chief of Staff John Kelly, who is rumored to no longer be on speaking terms with Trump, happily smiled for photos during the celebration. 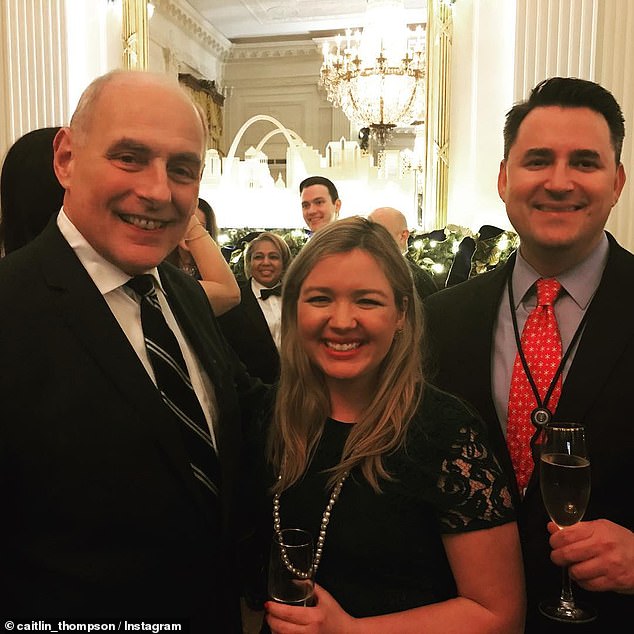 Former White House Chief of Staff John Kelly, who is rumored to no longer be on speaking terms with Trump, happily smiled for photos during the celebration 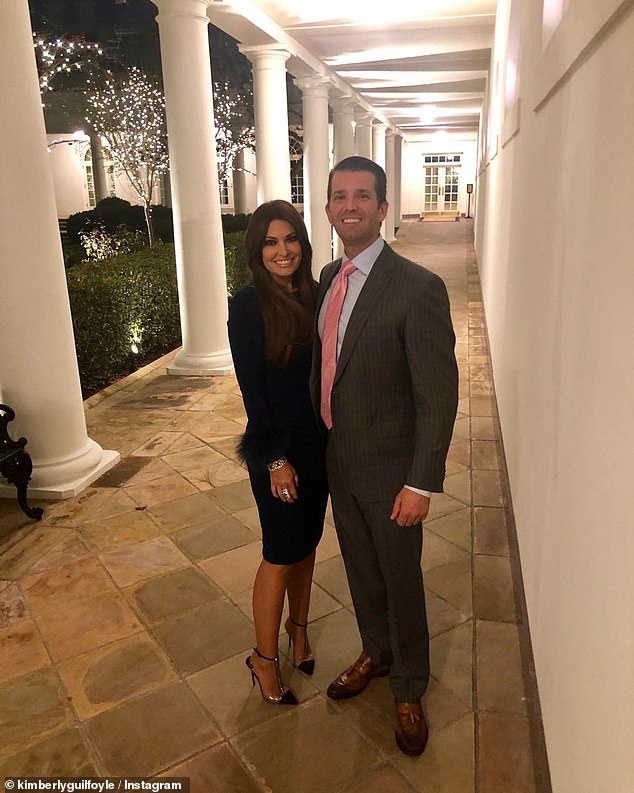 Trump’s eldest son Donald Trump Jr was also in attendance with girlfriend Kimberly Guilfoyle, who posted a picture of the couple on Instagram 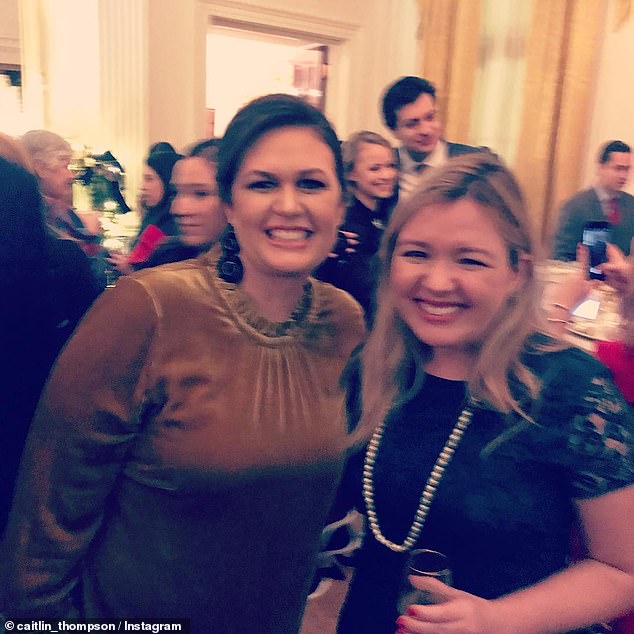 And former New Jersey Governor Chris Christie, who just recently turned down an offer to be Kelly’s replacement, was in attendance as well.

Christie posed for photos at the party with former Wisconsin Governor Scott Walker. Both men had run against Trump during the 2016 presidential campaign.

‘Great to be with my friend @ScottWalker tonight at the White House Christmas party,’ Christie tweeted.

‘He is a strong leader and helped many Wisconsin citizens get back to work in his 8 yrs as Governor. Merry Xmas!’

Walker seemed particularly impressed with the cranberry trees decorating the White House, tweeting out a picture of them as he shared that Wisconsin was the ‘#1 cranberry state in America!’ 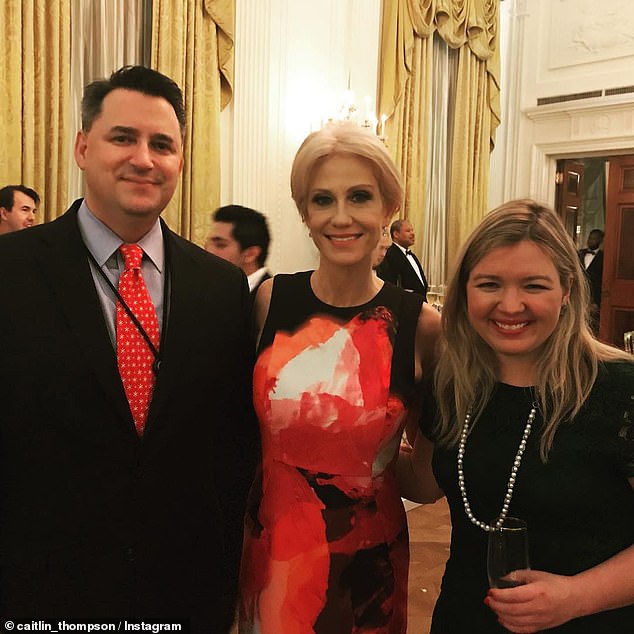 There were, of course, current Trump officials getting into the holiday spirit as well as Defense Secretary Jim Mattis and Kellyanne Conway mingled with guests 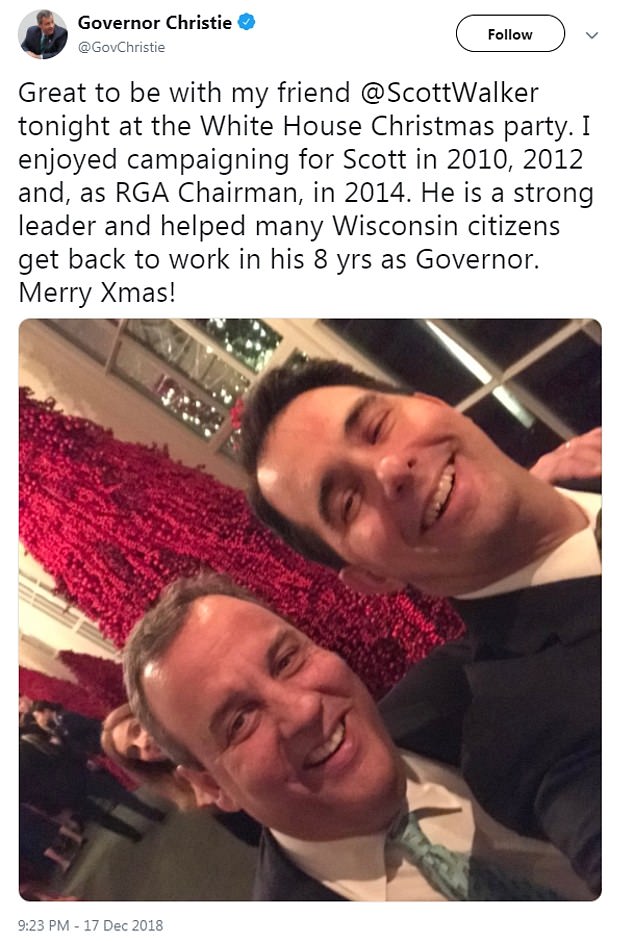 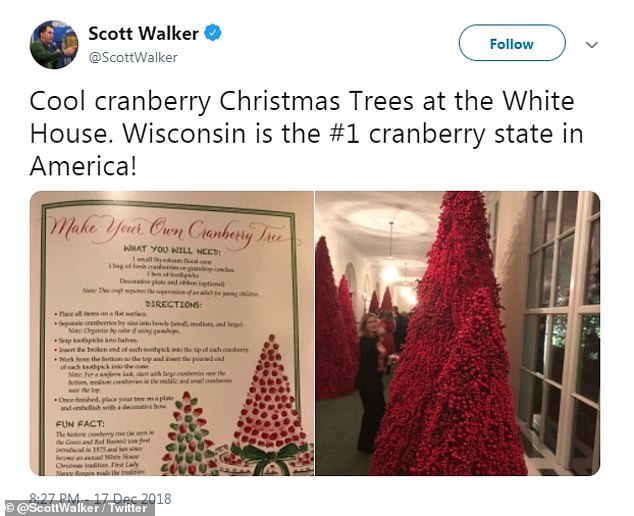 Also at the party were fellow former press secretary Sean Spicer, who resigned in July 2017, and current Interior Secretary Ryan Zinke – who will leave at the end of the year.

Sebastian Gorka, who was reportedly forced out of his position as deputy assistant to the president last year, took selfies with Ronald Reagan’s portrait at the party.

There were, of course, current Trump officials getting into the holiday spirit as well as White House Press Secretary Sarah Huckabee Sanders, Defense Secretary Jim Mattis, and Kellyanne Conway all mingled with guests.

Donald Trump Jr posted a video of himself with the duo, who told the camera that they don’t ‘want to hear about what’s going on with [Trump’s] money’.

‘His business ain’t none of our business,’ they said, clearly alluding to the ongoing scandal regarding hush money that was paid during the presidential campaign to two women who claimed to have slept with Trump.

Don Jr attended the soiree with his girlfriend Kimberly Guilfoyle, who posted a picture of the couple on Instagram. 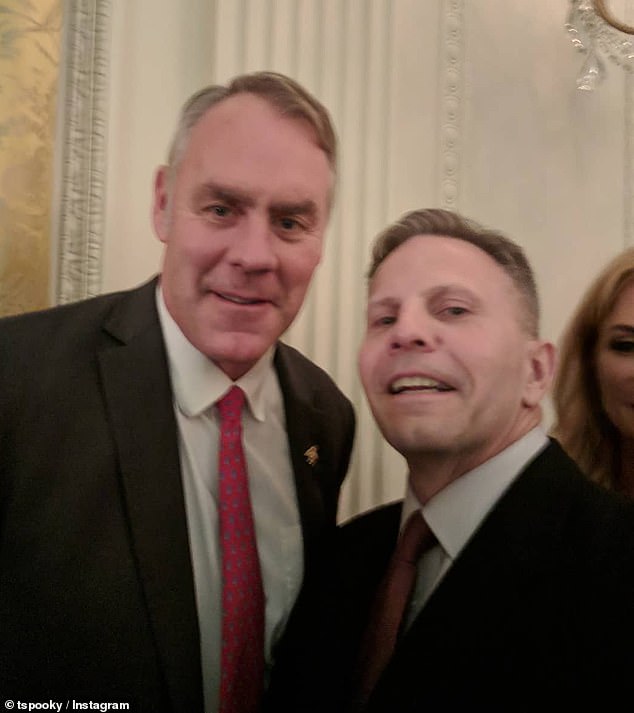 Interior Secretary Ryan Zinke (left), who recently announced he will resign at the end of the year, was pictured at the party with Trump 2020 adviser Anthony Shaffer (right) 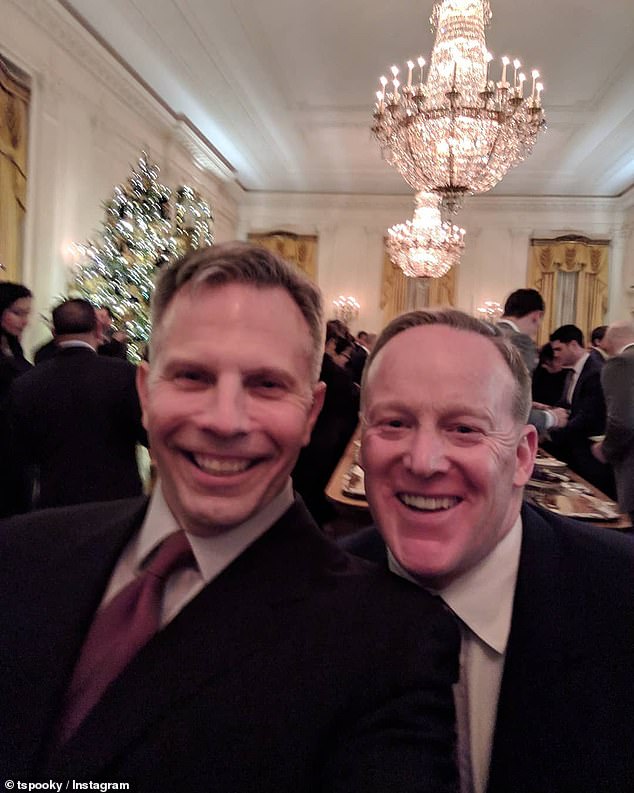 Shaffer also snapped a photo with former Trump official Sean Spicer (pictured), who appeared to be having a blast at the celebration

Entertainment for the guests included the Army Choir, which sang Christmas carols, and tables full of holiday treats including eggnog and even a replica of the White House built entirely out of gingerbread.

By the time Christmas Day comes and goes, Trump will have attended 21 Christmas parties for a total of 52 hours, according to New York Magazine.

And White House sources have revealed that Trump hates attending Christmas parties as part of his presidential duties – especially when it comes to taking photos and shaking hands.

‘It’s just a lot,’ one senior White House official told the site. ‘They’re hosting all these people, half of whom they don’t know.’

‘He just gets impatient. He likes to go, go, go. Sitting through things, he gets restless.’ 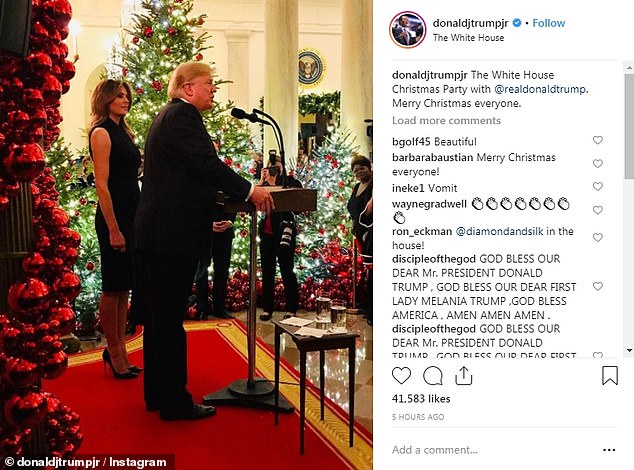 Trump Jr took to the podium to speak to his guests, with Melania by his side, during the party 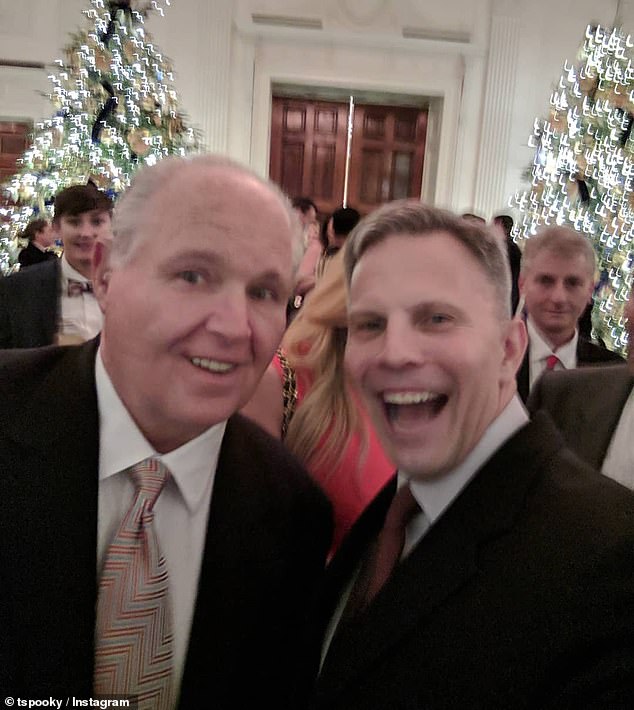 Another source claimed that what Trump hates about the gatherings are that they were about the holiday, rather than himself.

Sources said Trump absolutely loathed his first Christmas as president, when he was introduced to the traditional photo line.

The photo line, which presidents have participated in at various degrees since John F. Kennedy’s term, requires them to take a photo with every guest in line.

It is a process that can take hours and involve a lot of handshaking.

‘He’s kind of a germaphobe,’ one source said of Trump. ‘So I heard that was a concern too.’ 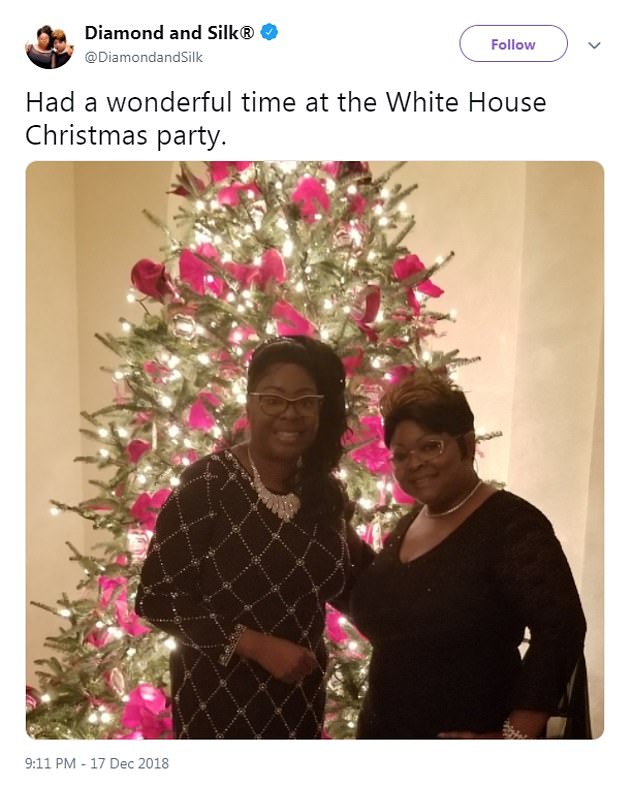 Social media personalities Diamond and Silk, who have been vocal supporters of Trump, received an invitation as well 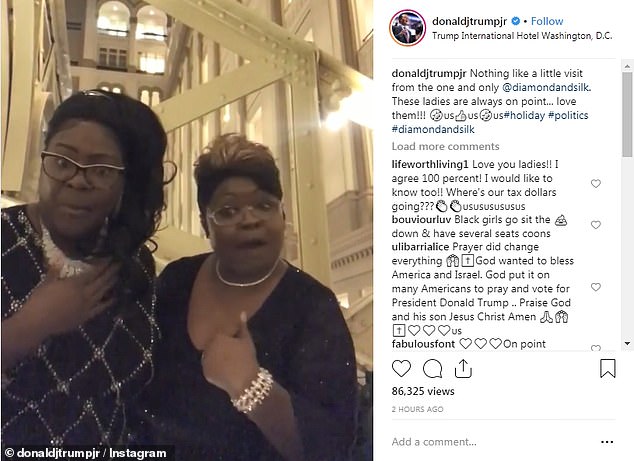 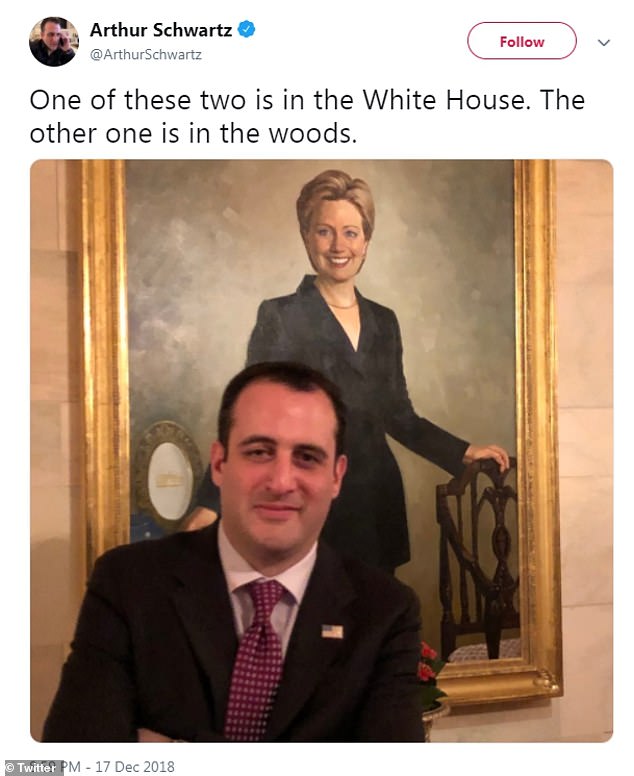 Arthur Schwartz, a friend of former Trump official Anthony Scaramucci who made headlines after accusing Reince Priebus of having an affair, attended the party as well

One source said it quickly became clear that Trump would not have as much tolerance for the photo line as the presidents who came before him.

‘He definitely gets impatient with photo taking because that is literally, at times, two hours of standing there and taking pictures,’ one source said.

‘And because he is the ultimate host, he talks between clicks.’

During one party, Trump even openly complained to his aide.

‘He said, “I’m supposed to be the president, but now all I do is stand there and take pictures all day. There’s no telling what’s going on in the world right now. I’d never now,”‘ they recalled.

At another party, Trump saw Vice President Mike Pence in the crowd and had him take his and Melania’s place in the photo line.

This year, officials decided to take the formal photo line out of most parties. An exception was made for parties for the Secret Service and law enforcement. 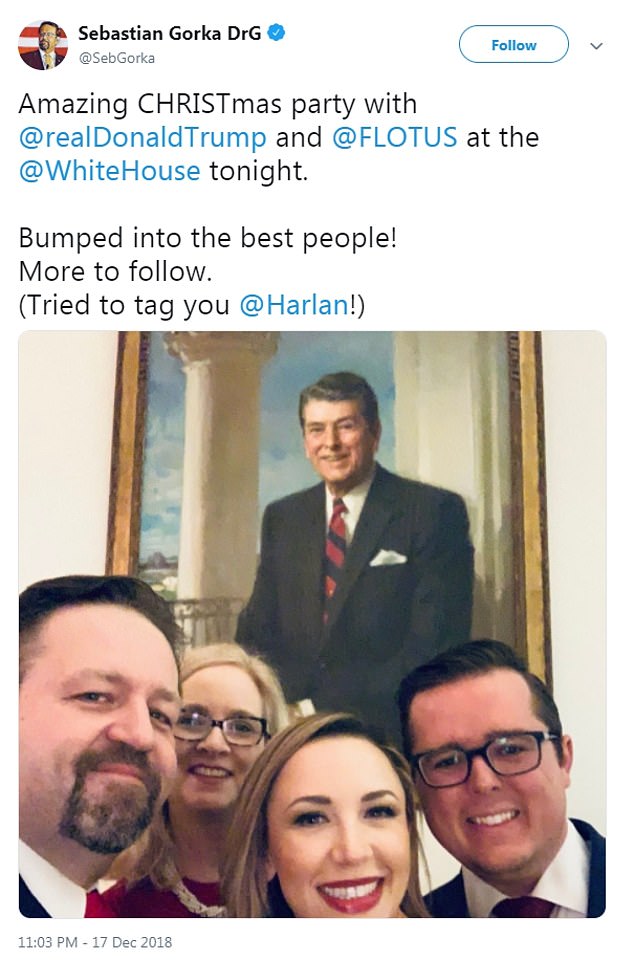 Sebastian Gorka, who served a short stint as deputy assistant to the president in Trump’s administration, took selfies with Ronald Reagan’s portrait

‘We have way fewer photo lines. This year has been much, much better,’ the senior official said.

‘Much better in terms of his being fine with things and in a much better mood. He’s said a couple of times that this year is way better than last year.’

It was actually the preceding administration who first decided to scale back photo lines at White House Christmas parties, although they received far more criticism.

Barack Obama came under fire from Vanity Fair political correspondent Todd Purdum, who was upset the president wasn’t posing for as many photos as past presidents always had at these parties.

‘He has all the friends he thinks he’ll ever need, is not interested in making new ones, has limited time for the grip and grin that is the lifeblood of retail politics, and is almost certainly the most introverted president of modern times,’ Purdum wrote. 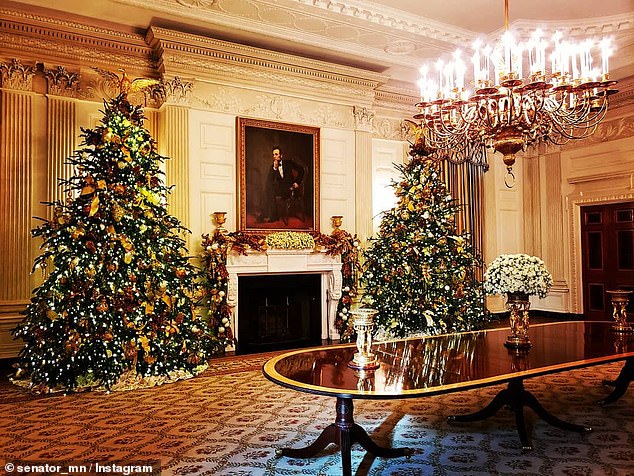 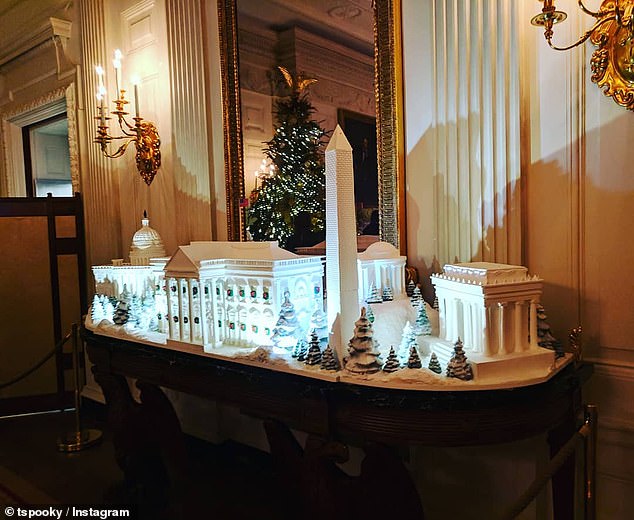 Purdum added that he believed that Obama should have been more like Abraham Lincoln, who once held a public reception while his son was dying upstairs.

‘Lincoln did it. FDR did it. Clinton did it. So why is Barack Obama so standoff-ish when it comes to stroking the folks who want to be stroked? It’s not “beneath” the office – it’s part of the job,’ he wrote.

Dan Pfeiffer, who served as senior adviser to Obama, revealed that photo lines were cut short because the administration was ‘particularly’ busy during that time of year.

‘There were several years in a row where we were dealing with some Congressionally generated crisis at the exact moment we had to go say “Hi” to lots of people either at night or in the afternoon,’ he said.

‘Having a photo line extends the time of the event and limits the number of people you can invite.’