In another hit at websites’ anti-conservative bias on Tuesday, Donald Trump helped enhance visibility for a right-leaning nonprofit’s video that attempts to prove the president never called neo-Nazis ‘very fine people’ following the rallies in Charlottesville in 2017.

‘Despite dishonest tactics from Google/YouTube to suppress my video, my debunking of the #CharlottesvilleLie #FinePeopleHoax has over 4 million views and counting,’ CNN commentator and author Steve Cortes tweeted Saturday morning.

‘The truth liberates! Please watch and spread it further,’ he continued.

In the nearly six-minute video, which was created by Prager University, Cortes describes the media’s reporting of the fallout from clashes in Virginia, including Trump’s comments on the event, was intentionally inaccurate.

Donald Trump took another hit at Google and Youtube for anti-conservative bias, reposting a claim that they try to stifle right-leaning voices 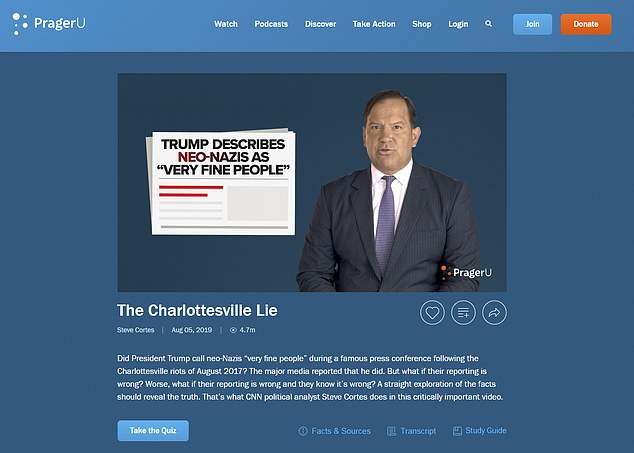 ‘Thank you Steve!’ Trump tweeted to the conservative commentators tweet

Prager University is a nonprofit that creates videos on political, economic and philosophical topics from a conservative perspective.

Cortes claimed the video had more than 4 million views when he made the tweet on Tuesday morning, hitting at Google and YouTube in what he claimed was an unsuccessful effort to stifle his voice.

In the hours after Trump tweeted the video, the PragerU website’s version showed it had a total of 4.8 million views and the version on Prager’s YouTube page has more than 2.4 million views.

The description of the video questioned whether the media and journalists got Trump’s comments wrong on purpose.

In 2017, a Unite the Right rally descended on Charlottesville, Virginia.

The next morning there was a separate group of protesters that showed up in Charlottesville to call for the removal of the Robert E. Lee statue in the town square.

The rallies turn violent when counter protesters showed up and clashes broke out between those protesting the statue removal and those who supported the move. One counter protester lost her life when she mowed down by a car driving through a crowd of people.

Following the death and fights between protesters, which may have included people who were part of the Unite the Right rally the night before, and the counter protesters, the country called on Trump to respond. 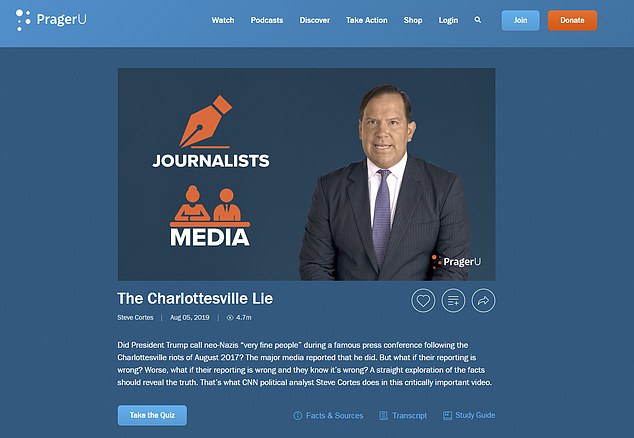 ‘Despite dishonest tactics from Google/YouTube to suppress my video, my debunking of the #CharlottesvilleLie #FinePeopleHoax has over 4 million views and counting,’ Cortes tweeted 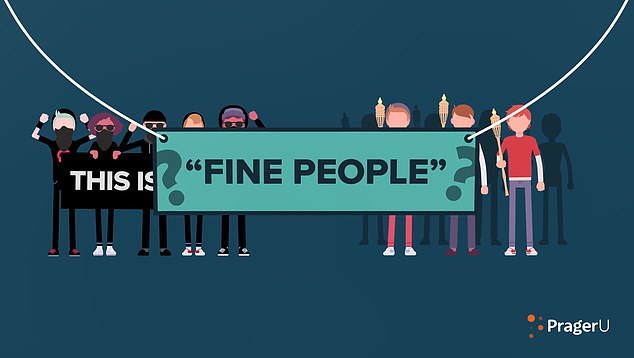 He explained Trump was calling the protesters who were demanding the Robert E. Lee Statue remain in the Charlottesville park, and the counter protesters who wanted it removed, ‘very fine people’ 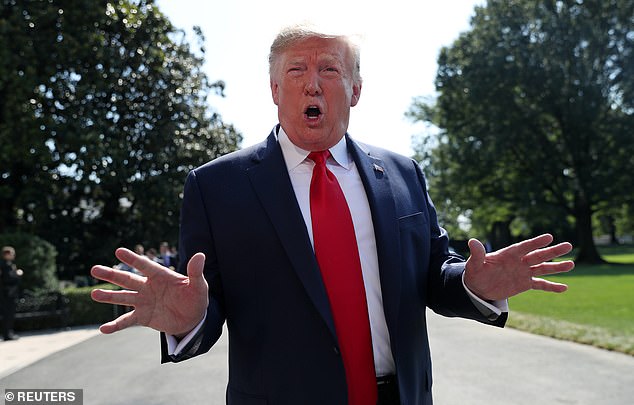 The White House is drawing up an executive order meant to to address the alleged discrimination against conservatives on platforms and websites like Facebook, Twitter and Google

Trump condemned the violence but also used the phrase, ‘very fine people on both sides,’ which caused an outcry over claims he was referring to neo-Nazis and white supremacists when he made the comments.

While some argue the comment was racist, others say he was only making reference to the people who didn’t want historical statues removed.

‘The media reporter that President Trump described neo-Nazis as ‘very fine people.’ Only, he didn’t. In fact, he didn’t even hint at it. Just the opposite, he condemned neo-Nazi in no uncertain terms,’ Cortes says in his video.

Cortes argues that Trump was making reference to the protesters and counter protests over the statue’s removal, not neo-Nazis who showed up the night before for a march and rally in the Virginia city.

Trump has been vocal against social media and other websites for apparent bias against conservative voices and figures.

The White House is even drawing up an executive order meant to to address the alleged discrimination against conservatives on platforms and websites like Facebook, Twitter and Google.

A White House official called Twitter a ‘liberal cesspools of venom’ and described the potential order as an effort to restore ‘fairness in the system.’