Donald Trump ‘may be preparing to bomb Iran.’ reports claim

The US government may be preparing to bomb Iran’s nuclear facilities as early as next month, senior Australian security sources have claimed.

The country’s national broadcaster, the ABC, said Donald Trump may be ‘ready’ to order a strike on the Middle Eastern country, citing anonymous top officials.

But Prime Minister Malcolm Turnbull has played down the report, saying it was just ‘speculation’.

US President Donald Trump ‘could be ready to order a strike against Iran’, anonymous Australian government sources have claimed 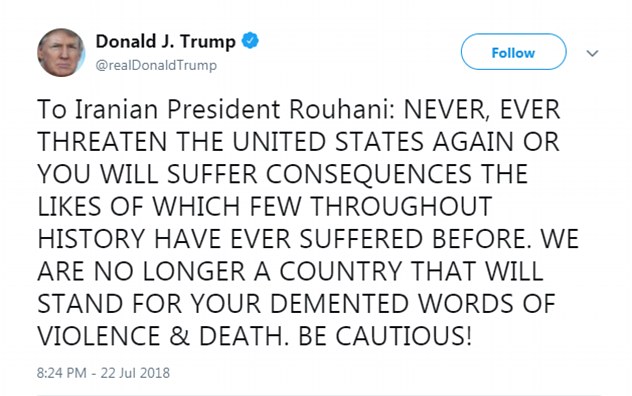 Strong words: Mr Trump threatened that that Iran ‘will suffer consequences the likes of which few throughout history have ever suffered before’

‘The story on the ABC, which cites senior Australian government sources, has not benefited from any consultation with me, the foreign minister, the defence minister or the chief of the defence force,’ Mr Turnbull told ABC Radio.

The nation’s top secret Pine Gap base in the Northern Territory and other Australian defence facilities could play a role in identifying targets for a strike, the ABC claimed.

The claims come as the US President this week fired off a thundering, all-caps tweet warning the Iranian President, Hassan Rouhani, of war.

‘To Iranian President Rouhani: NEVER, EVER THREATEN THE UNITED STATES AGAIN OR YOU WILL SUFFER CONSEQUENCES THE LIKES OF WHICH FEW THROUGHOUT HISTORY HAVE EVER SUFFERED BEFORE. WE ARE NO LONGER A COUNTRY THAT WILL STAND FOR YOUR DEMENTED WORDS OF VIOLENCE & DEATH. BE CAUTIOUS!’ Mr Trump said. 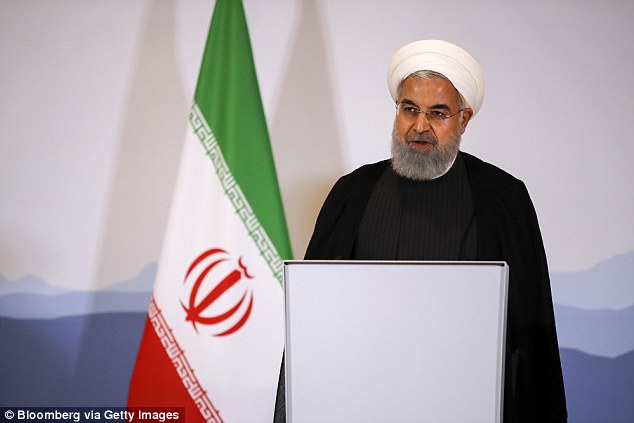 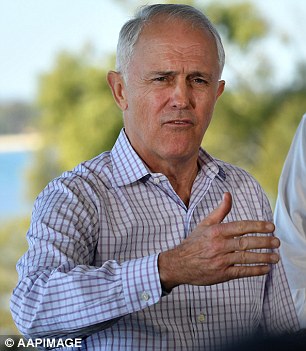 Mr Rouhani had warned Mr Trump against adopting a hostile policy against Iran.

‘You are not in a position to incite the Iranian nation against Iran’s security and interests.’

Mr Trump withdrew the United States from a long-term nuclear deal with Iran, which was struck by his predecessor Barack Obama.