A mother-of-four is warning others against kissing their newborns during the flu season after her own son barely survived a severe respiratory infection last winter.

Ariana DiGrigorio’s son Antonio caught the flu last December when he was still an infant.

But for two months he couldn’t seem to shake the symptoms. Soon, they were back in the hospital near their home in Keansburg, New Jersey, where Antonio  was diagnosed with respiratory syncytial virus (RSV).

In August, Ariana shared a heart-wrenching photo of son in the hospital with all manner of supportive and monitoring tubes and wires coming from his tiny body on Facebook, urging parents to keep their babies away from relatives’ kisses, for the infants’ good.

Antonio DiGrigorio was sent home from day care in December. Two months later, he was in the ICU after contacting respiratory synctial virus, which can be deadly to babies

RSV is a common viral infection but not a serious one for most of us.

But the elderly, those with compromised immune systems and especially babies are vulnerable to the virus.

Most instances of pneumonia and bronchitis in infants are triggered by RSV.

For Antonio, it nearly proved fatal.

He had been at daycare, but the facility staff called Ariana and told her her baby seemed unwell.

She took him directly to the hospital, to be sure he didn’t have anything life-threatening.

Antonio (center) is now one, and has recovered, but his mother, Ariana (second from left) is begging adults not to kiss babies and potentially expose them to a virus that could land the infants in the hospital, or even kill them. Pictured with family members

Antonio was diagnosed with the flu but his RSV test was negative.

But flu symptoms rarely last more than three weeks, even in infants.

Two months on, Antonio wasn’t better, so back to the hospital went Ariana and her son.

This time the RSV test was positive, and Antonio wound up in the intensive care unit, hooked up to a respiratory ventilator for much of his stay.

Even once he could breathe on his own, Antonio had to get breathing treatments.

Antonio pulled through, but it was a terrifying time for the DiGrigorio family.

Ariana told ABC she believes that once her son had the flu, his immune system was weakened, and from there he could have picked up RSV from any where. 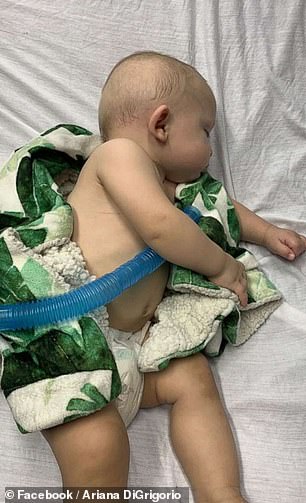 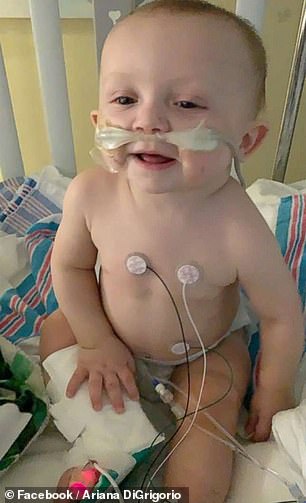 He spent six days in the ICU near the DiGrigorios’ home in Keansburg, New Jersey. Even after he could be taken off the ventilator, the infant needed regular breathing treatments  (left). RSV is not serious for most adults but can be life-threatening to infants, who may get it from a simple kiss on the forehead (right)

The virus travels in tiny droplets of spit, snot and mucus.

Even a simple kiss to the forehead could be enough to sicken a baby like Antonio, a fact Ariana reminded thousands of people on Facebook of last month.

‘Don’t be the reason a baby is hospitalized (or dead) because the baby was “just so cute I had to kiss her!”‘ Ariana wrote in an August 23 Facebook post that was shared over 2,500 times.

‘It’s super awkward as a parent to have to tell someone (especially a family member or friend) to step away from your baby.

‘It’s also super difficult to stop someone from kissing your child after they’re already going in for the kiss.’

She noted that even if an adult doesn’t feel sick, they are contagious for as any as 24 hours before their symptoms show up.

RSV infections are most common in adults between December and March, and Ariana begs that anyone who is sick or even thinks they might have a ‘sinus infection’ stays home.

And most importantly, ‘Please keep your mouths/breaths away from a baby’s face, hands and feet,’ Adriana asks.

‘Don’t be selfish. Don’t kiss babies. It’s not worth it.’