The team targeted by a bomb attack has taken to the field in an act of defiance against terror, as fans serenaded them with a rendition of You’ll Never Walk Alone.

Borussia Dortmund and Monaco meet tonight at the Signal Iduna Park stadium to finally face off after yesterday’s Champions League tie was cancelled.

Players took to the field wearing shirts that paid tribute to Dortmund defender Marc Bartra, who was hospitalised in an attack on the team’s bus as it left a hotel.

Outside the ground, extreme measures were taken to ensure things ran smoothly in Germany. 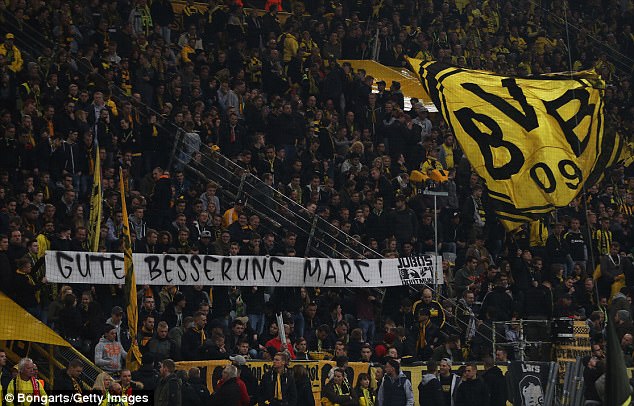 Dortmund fans hold a banner during the game which reads ‘get well Marc’, in tribute to injured defender Marc Bartra 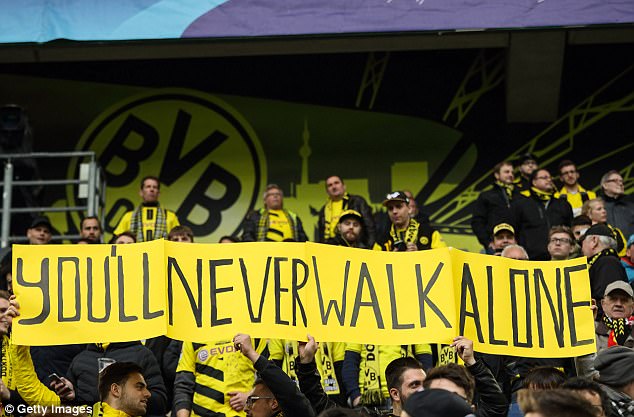 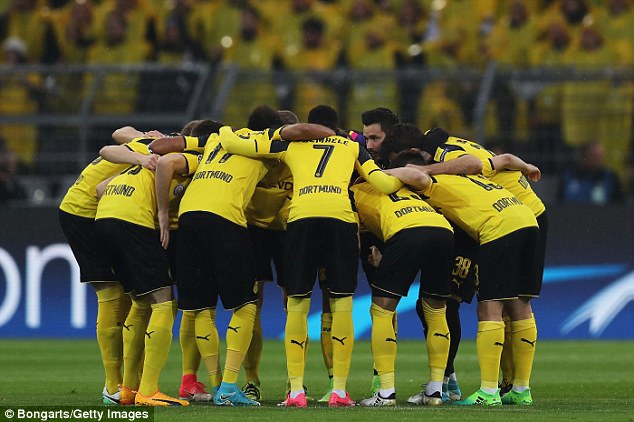 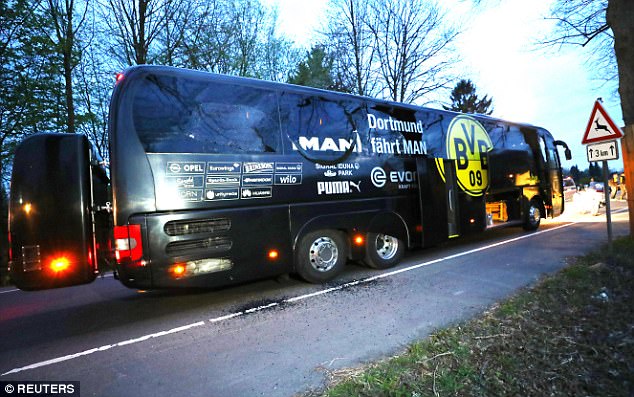 The Borussia Dortmund team bus was last night hit by three explosions while carrying the squad to their Champions League quarter-final against Monaco, with defender Marc Bartra taken to hospital with a broken bone in his wrist 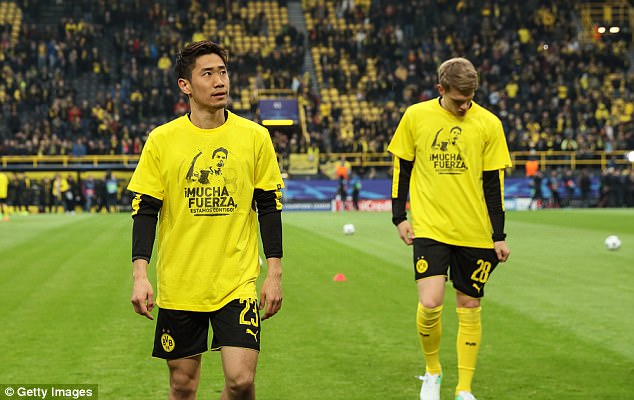 Dortmund turned up to the stadium following a number of police vehicles while there was also an armoured tank parked outside the venue.

Armed police officers also lined up outside Signal Iduna Park in a bid to keep things under control ahead of the crunch European fixture.

An ‘Islamist’ suspect has been arrested in connection with the attack as authorities say they are treating it as a ‘terrorist attack’.

German police searched properties belonging to ‘two suspects from the Islamist spectrum’ on Wednesday and arrested a 25-year-old Iraqi man from Wuppertal – not far from Dortmund – meaning another man is still on the loose.

The explosive devices used in the attack contained metal pins, one of which was found buried in a headrest on the vehicle, according to Frauke Koehler, a spokeswoman for federal prosecutors.

Ms Koehler said it was lucky ‘that nothing worse happened’, adding that investigators are still working to determine how the devices were detonated and what substance was used. 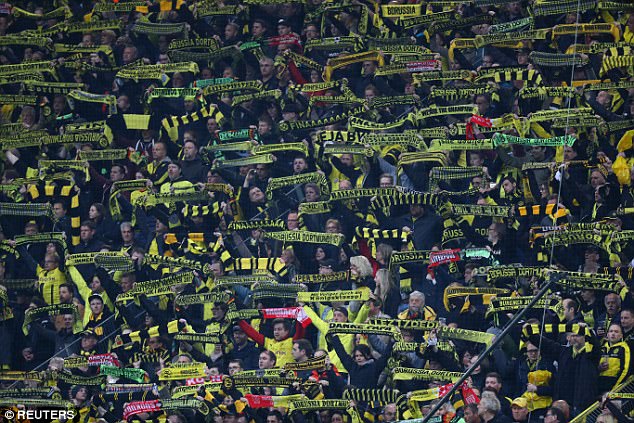 The team targeted by a bomb attack has taken to the field in an act of defiance against terror, as fans serenaded them with a rendition of You’ll Never Walk Alone 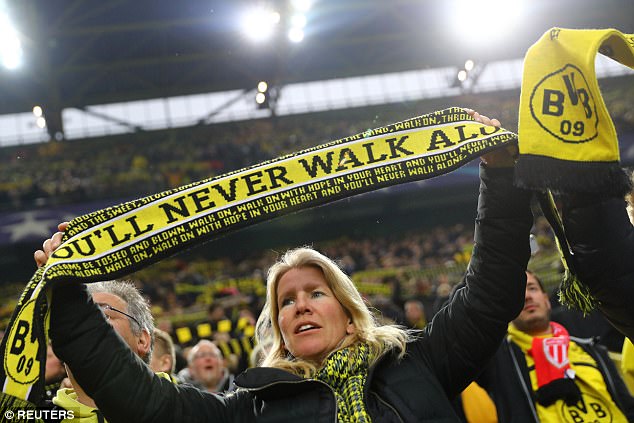 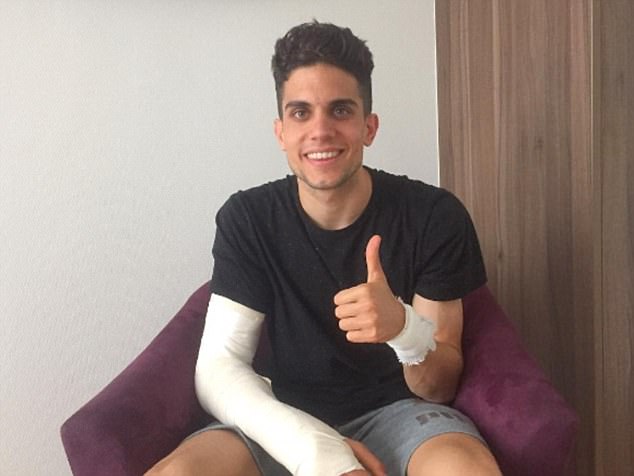 Marc Bartra was injured in the explosion and was taken to hospital. He is pictured today with his arm strapped after surgery 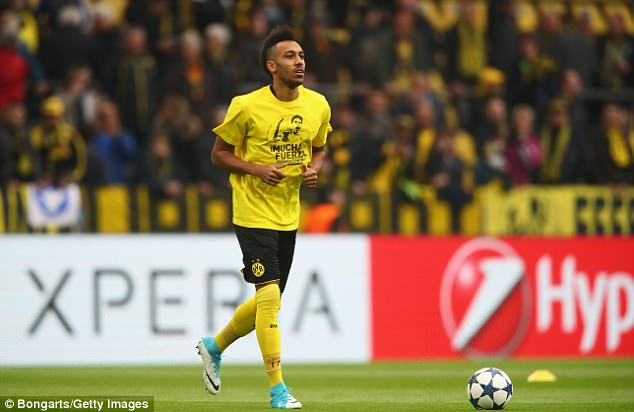 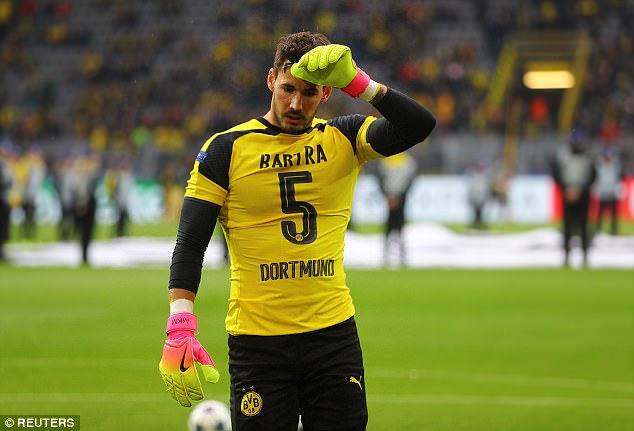 Borussia Dortmund’s Roman Burki wears the shirt of Marc Bartra before the match, where they will face off against Monaco 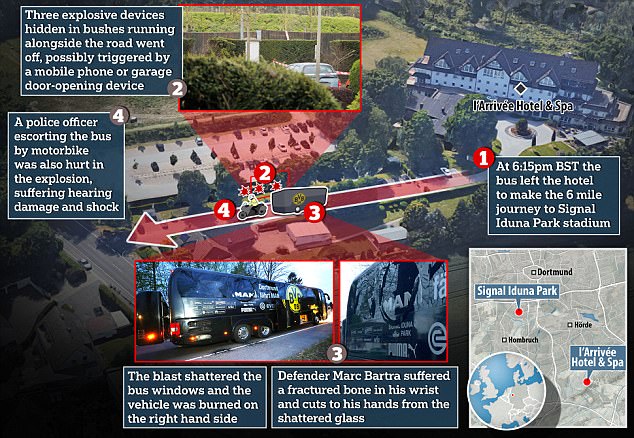 Police in Germany have arrested an ‘Islamist’ suspect over last night’s pipe bomb attack on the Bourissa Dortmund team bus, and say they are investigating another suspect ‘from the Islamist spectrum’

The second suspect is a German, aged 28, from Froenderburg, near Unna, also in the state of North Rhine-Westphalia.

They have both reportedly been on the police and intelligence services radar for affiliation to ISIS while it has been claimed that one of them was seen in the vicinity of the crime scene shortly before the pipe shrapnel bombs were detonated.

Elsewhere police said three letters claiming responsibility for the attack have been found, all of them saying that it was carried out in the name of Islam.

Another letter claiming to be from the far-left group Antifa had been discounted as a fraud.

At least one of the notes made reference to the Berlin Christmas market attack, in which an ISIS fanatic drove a stolen truck into shoppers, killing 12. 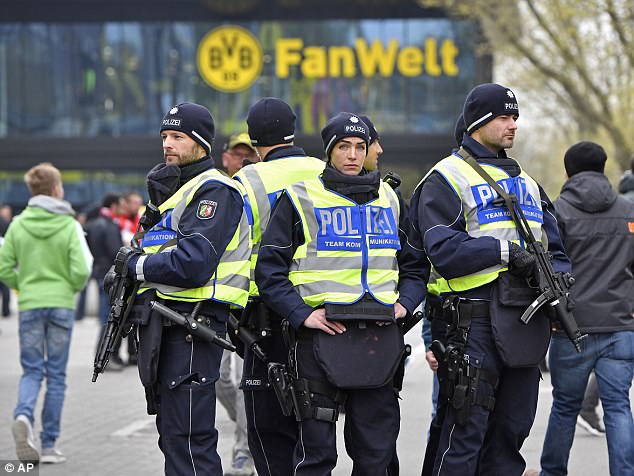 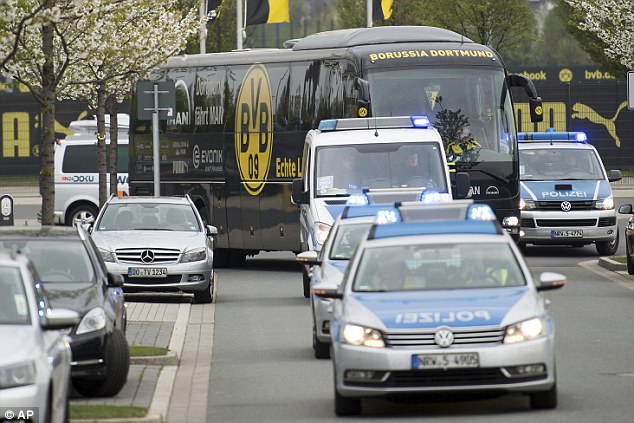 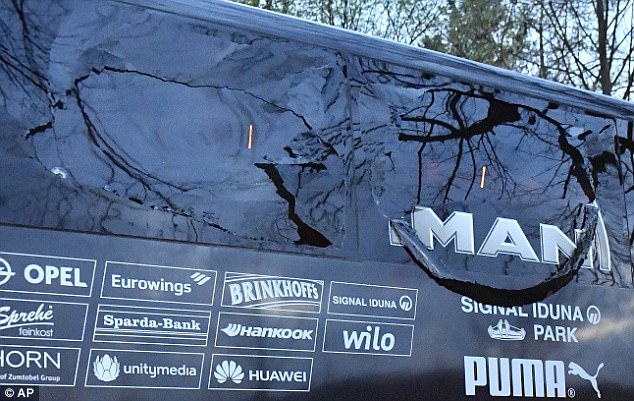 Prosecutors say the bombs were filled with metal pins, one of which was found embedded in a headrest on the bus, saying it was lucky ‘that nothing worse happened’

According to Der Spiegel, that letter was written in German starts with the phrase ‘In the Name of Allah, the Gracious, the Merciful’ and ends with two demands.

First, ‘tornadoes’, a reference to German reconnaissance planes, must be withdrawn from Syria, and second the US base in Ramstein should be closed.

Controversial drone operations against terror targets in the Middle East are controlled from the base.

The letter also claims that German combat aircraft are involved in killing Muslims in the ‘Islamic State’, adding that athletes and other celebrities ‘in Germany and other Kreuzfahrer (crusader) nations’ are now on a ‘death list’.

Terrified stars dived for cover as three blasts sent shards of glass flying through their coach while defender Marc Bartra broke a bone in his right wrist and later needed surgery to remove ‘foreign objects’ from his body.

The coach had just left the club hotel ahead of their Champions League quarter-final clash with Monaco when the bombs were detonated in what is believed to have been a targeted attack. 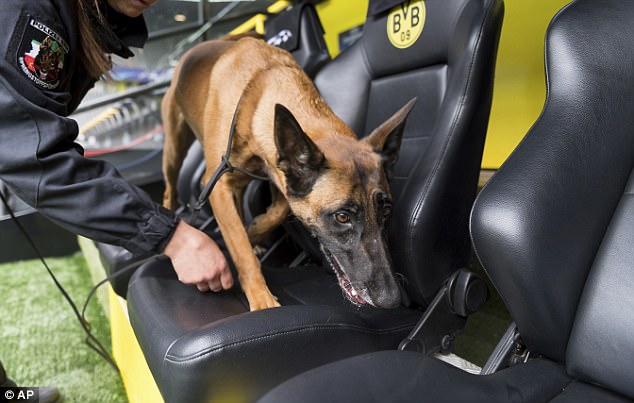 A sniffing dog and its handler search the stadium in Dortmund, western Germany, prior to the postponed Champions League quarterfinal 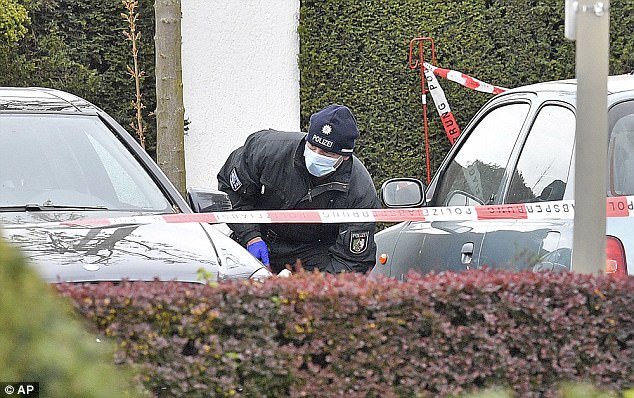 Police remained on the scene today as an investigation gathered pace. The explosive devices used in the attack contained metal pins, one of which was found buried in a headrest