A driver floated away in his Mercedes as heavy rains flooded southeast Queensland with three more days of rain forecast to soak the state.

More than 263 people called emergency services for help as a massive deluge swamped areas from Brisbane to the Gold Coast.

Several people had to be rescued from flood waters including one man, caught on camera shouting for help as he floated away in a black Mercedes-Benz in Oxenford on the Gold Coast.

Water gushes underneath a Currumbin Valley bridge on Sunday 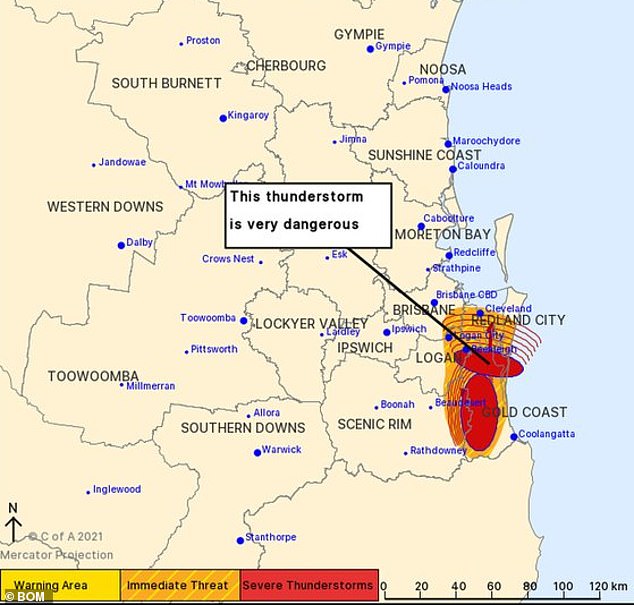 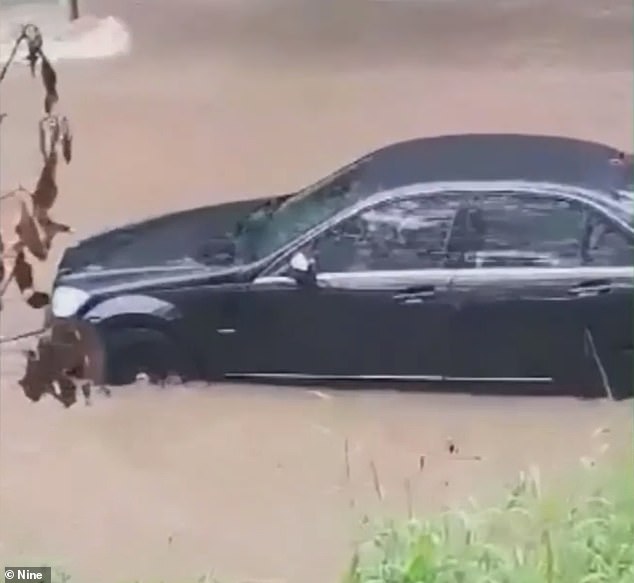 The driver was still inside this Mercedes-Benz as it floated away, with a bystander saying she could hear him shouting out for help as he drifted past

The bystander who caught the footage on her mobile phone could be heard saying ‘he’s singing out, he’s saying ‘help’ as the sedan glided past, 9News reported

Swiftwater rescue crews saved several people from the flooded streets including a woman stranded at Tallebudgera at noon.

Police received calls for help from people stuck at Tallai and Nerang-Beaudesert Road.

Southeast Queensland is being soaked along with much of Australia’s eastern coast with unrelenting rain flooding everything from the Sunshine Coast to south of Sydney.

Three more days of rain are forecast with floodwaters to keep rising, putting thousands of homes and businesses under threat. 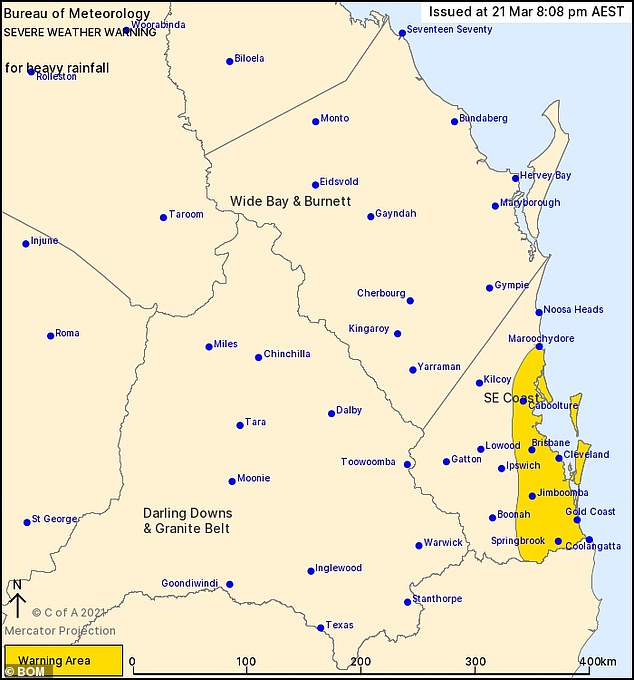 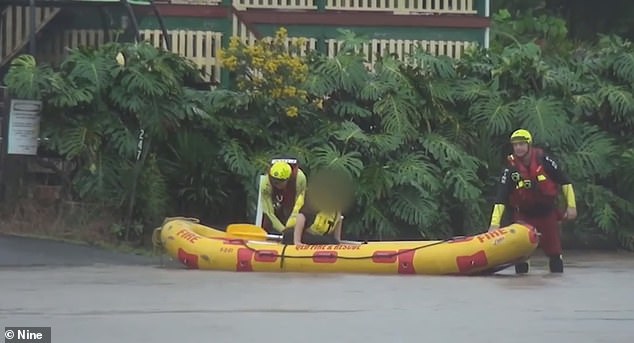 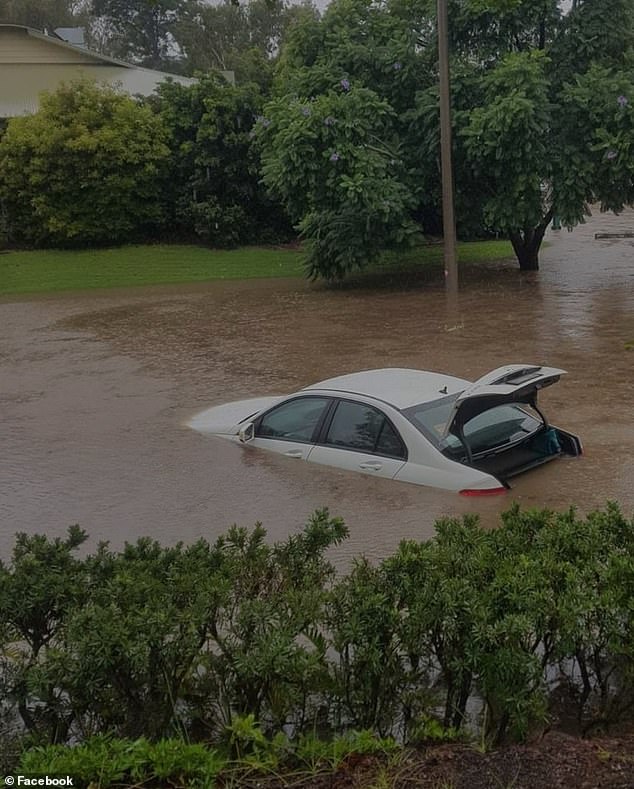 Cars were submerged by the rapidly rising flood waters, with several washed away

Cars were submerged and some were seen floating away in Mudgereeba as roads turned to brown rivers after almost 300mm of rain fell across the Gold Coast over the weekend.

Beaches are expected to stay closed on Monday.

An emergency alert was issued at 3.45pm Sunday for Gold Coast residents in the Currumbin, Mudgeeraba and Tallebudgera catchments.

Shailer Park in Logan, south of Brisbane, suffered damaged roads from the flooding while further inland, Mount Tamborine got smashed by raging torrents. 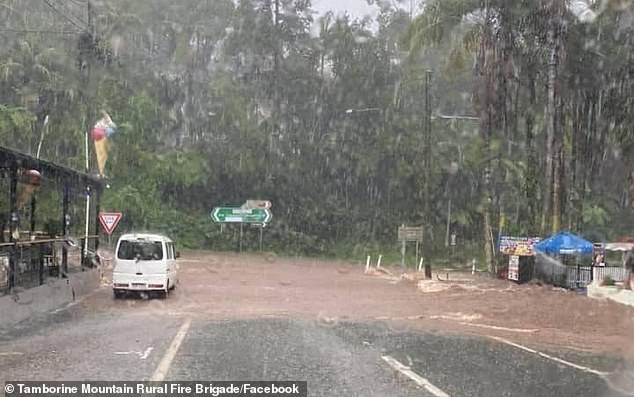 Tamborine Mountain in the Gold Coast hinterland was smashed on Sunday 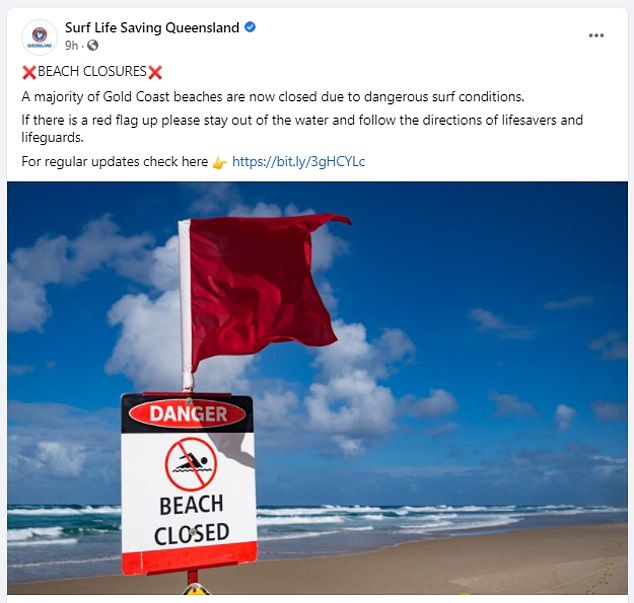 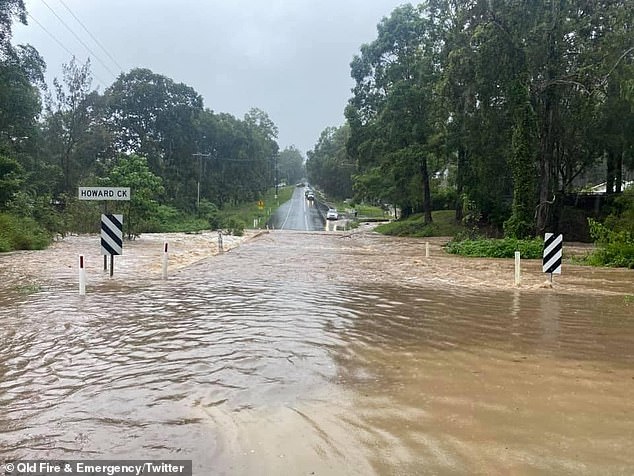 Tamborine Mountain Rural Fire Brigade took this photo of a flooded and impassable road at Howard Creek in the Gold Coast Hinterland, uploaded to Facebook about 2.15pm on Sunday 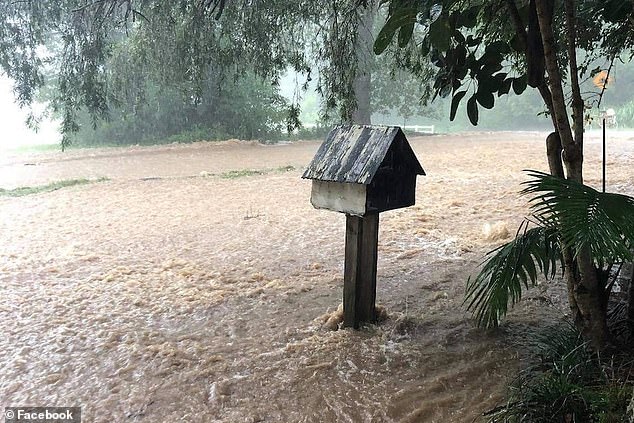 Emerald Lakes Golf Course, Carrara, was under water on Sunday 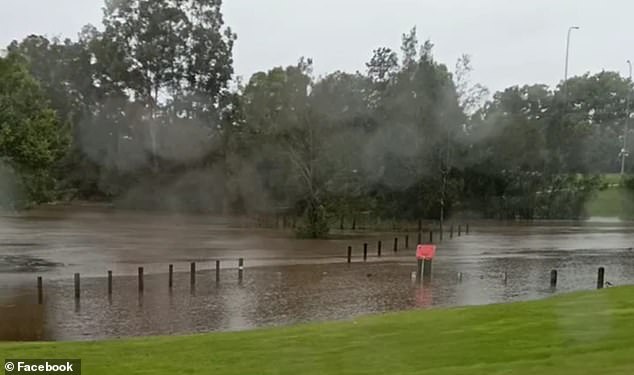 Severe thunderstorm warnings were issued by the Bureau of Meteorology just before 2pm for the Gold Coast, parts of Brisbane, Logan and the Scenic Rim – after heavy rains had already fallen on the Gold Coast hinterland.

Bonogin recorded 136mm in the two hours to 12.40pm while Mount Nathan recorded 105mm in just one hour.

Hotham Creek on the northern Gold Coast recorded 102mm from noon to 1pm.

Residents were urged to keep away from flooded rivers and creeks, and not to risk driving through flooded roads.

More flooding is on the way with several warnings current as of midnight on Sunday.

A severe weather warning for heavy rain of up to 180mm was issued just after 8pm on Sunday for the southeast coast stretching from Maroochydore down over Brisbane and the Gold Coast to Coolangatta.

‘Heavy rainfall which may lead to flash flooding is expected east of about Jimna, Ipswich and Rathdowney tonight and into Monday,’ the Bureau of Meteorology warning said. 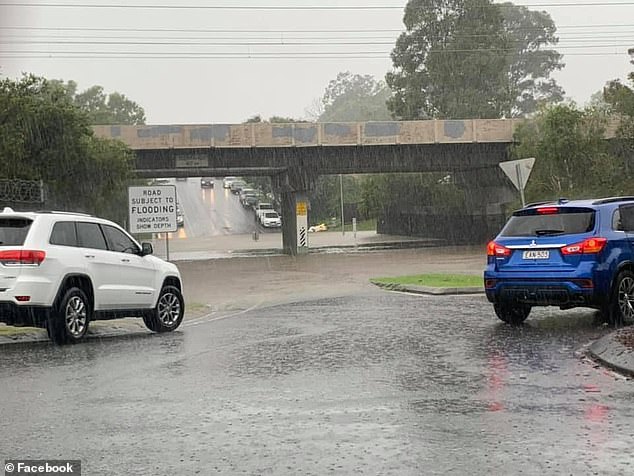 Heavy rains have been falling all weekend, with the wet weather to continue into Monday 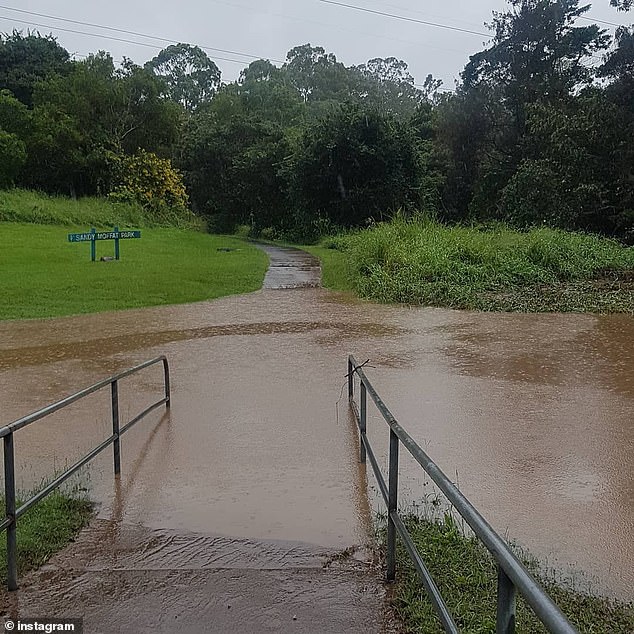 Flood warnings were still in place on Sunday night for the Nerang, Pimpama and Coomera rivers and the Tallebudgera, Currumbin and Mudgeeraba Creeks.

A separate severe thunderstorm warning for heavy rainfall was issued for Queensland’s Central Highlands, Coalfields and Capricornia districts at 9.46pm on Sunday, as heavy thunderstorms rained down on Byfield and Samuel Hill.

‘Severe thunderstorms are likely to produce heavy rainfall that may lead to flash flooding in the warning area over the next several hours,’ the warning said.

‘I have just been briefed by our disaster management team and the word is: do not travel on roads unless it is absolutely necessary,’ he told the Gold Coast Bulletin on Sunday afternoon.

‘The major creek systems across our city are in full flow so do not attempt to cross them, or go near the creek banks and causeway.’ 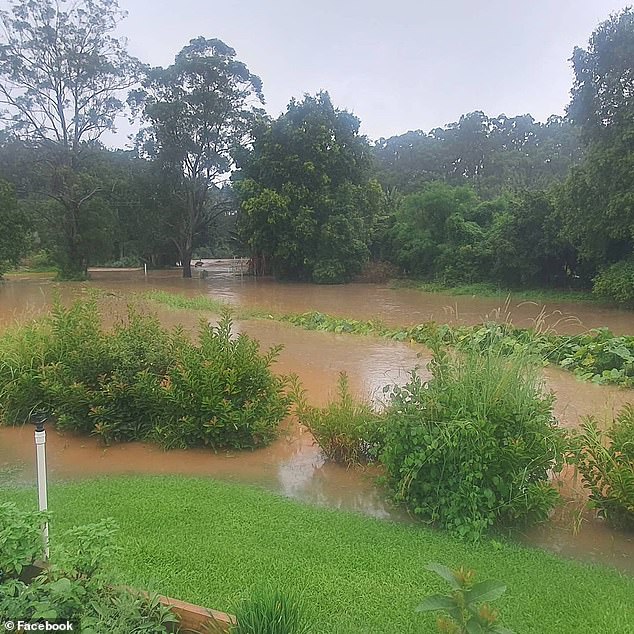 Social media was awash with flood pics from Mudgeeraba on Sunday 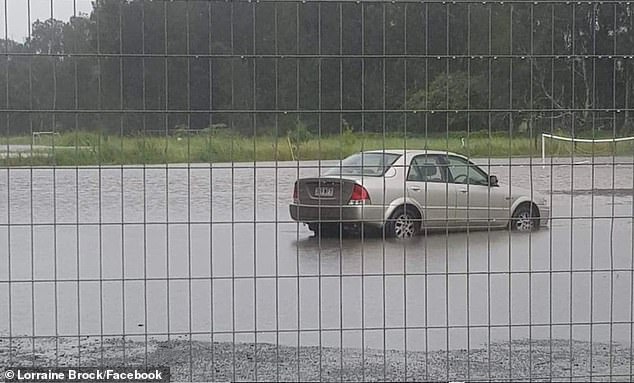 A stranded car at Carrara, Gold Coast on Sunday. Several drivers were caught out by the floods

On Sunday night the Bureau of Meteorology issued another severe weather warning for heavy rain in parts of Warrego, Maranoa and Channel Country.

‘An amplifying upper trough will combine with deep, tropical moisture to produce a significant rainband across southwest Queensland this evening. As the cloudband thickens into Monday, areas of heavy rain will develop during the morning,’ it said.

Just hours before Sunday afternoon’s thunderstorms hit, the Queensland Fire and Emergency Service announced about 130 Queensland emergency personnel from the SES and the Fire and Rescue service were heading south to help with the flood emergency in NSW.

At least 10 Queensland SES flood boats left on Sunday to help with with the flood emergency currently unfolding across New South Wales.