A driver has miraculously escaped with only minor injuries after veering off a road and smashing his car into a tree.

The man had allegedly dozed off behind the wheel at around 11am on Saturday morning, causing him to lose control of his vehicle while driving along the Western Highway near Green Lake in Victoria.

The tree cut straight through the middle of the car and ended up on the side of the passenger seat.

While the car was a complete write-off, the 67-year-old from South Australia was taken to hospital with just minor injuries.

‘I was amazed that the driver walked away with only minor injuries from this crash,’ he said.

‘If there was a passenger in that car, they would be dead.

‘This driver had been travelling for hundreds of kilometres without taking a break and just fell asleep.

‘He’s a very lucky man who has learnt a hard lesson about driving while fatigued.’

The man is expected to be charged with careless driving. 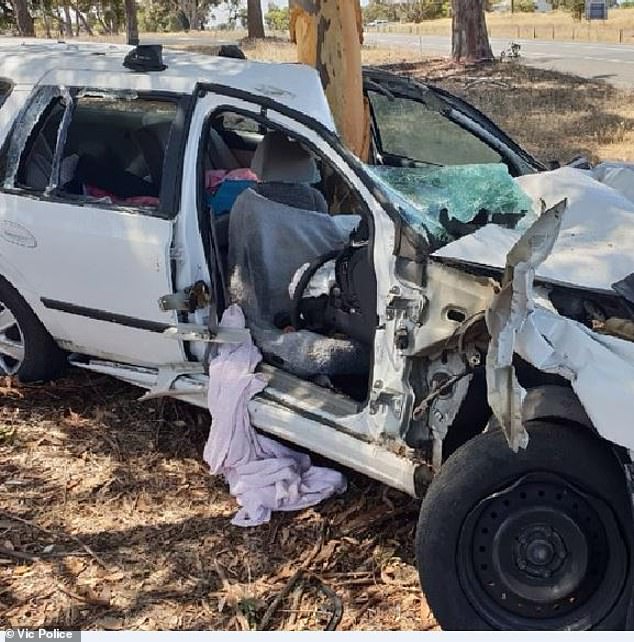 While the car was a complete write-off, the 67-year-old from South Australia was taken to hospital with just minor injuries

Police are out in force as part of the state-wide Operation Roadwise to target drink and drug driving, speed, distraction, fatigue and failure to wear restraints.

Operation Roadwise will run from 14 December to 6 January, and will focus on enforcement and improving driver behaviour.

Police will be out in force to target the five leading causes of death and serious injury on our roads – speed, impairment, distraction, not wearing seatbelts and fatigue.