Duke and Duchess of Cambridge visit Coach Core in Essex

The Duchess of Cambridge looked impeccable this morning as she rocked the smart casual look in a smart checked blazer, teamed with black skinny jeans and ankle boots.

Although she’s fond of recycling old outfits, the £625 blazer from Canadian brand Smythe appeared to be a new addition to Kate’s wardrobe.

Her outfit certainly wouldn’t look out of place on her sister-in-law Meghan who recently wore a similar ensemble on a visit to Dubbo during the royal tour of Australia.

Kate, 36, joined her husband William in Essex to visit the Royal Foundation’s Coach Core programme, an initiative using sport to empower those not in education or employment.

The royals had the opportunity to join in two different activities – indoor athletics and tennis – as well as a game of boccia – a seated game, where competitors throw a ball as close to a target as they can.

While William tried his hand at javelin throwing using foam arrows, keen tennis fan Kate had the chance to show off her skills on the court. 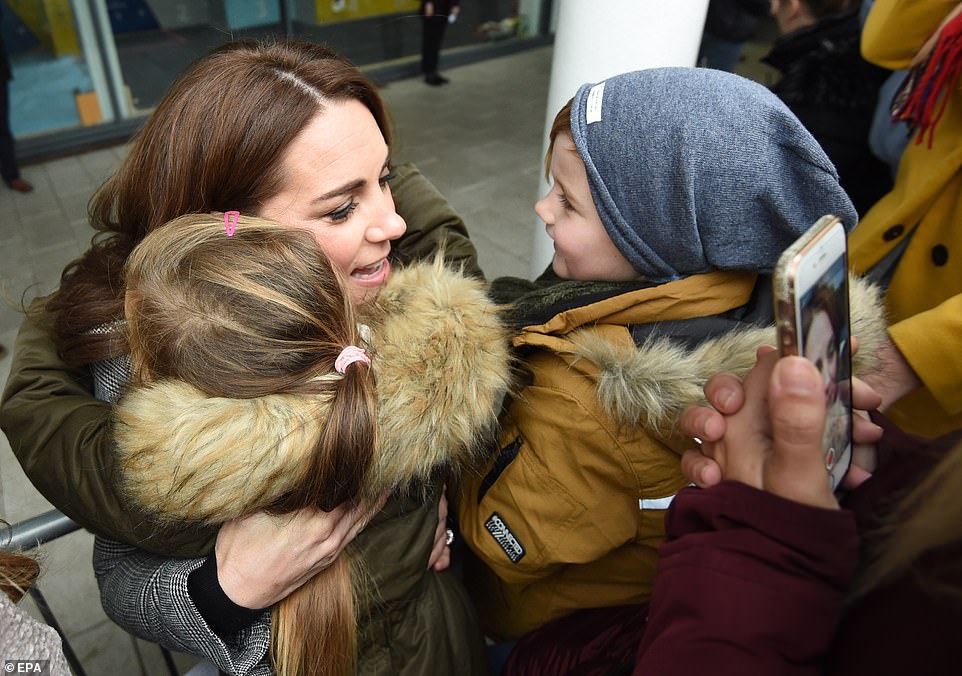 Hugs for Kate! The Duchess received a warm welcome from a young royal fan who couldn’t resist throwing her arms around the Duchess as she chatted to wellwishers outside Basildon Sporting Centre 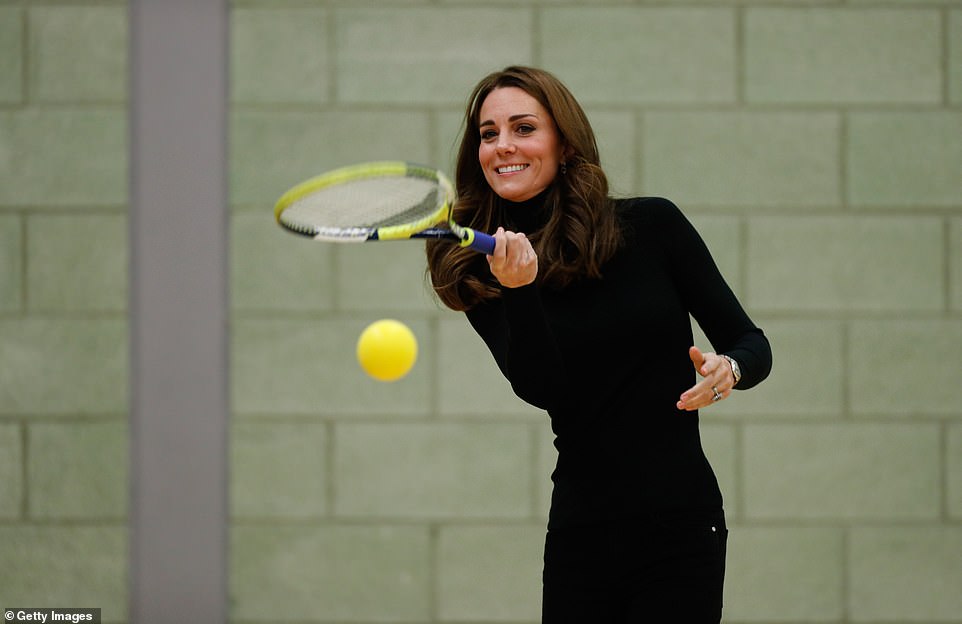 Next stop Wimbledon! Sporty Kate seemed to be in her element as she enjoyed a session on the court at Coach Core Basildon while meeting young apprentices 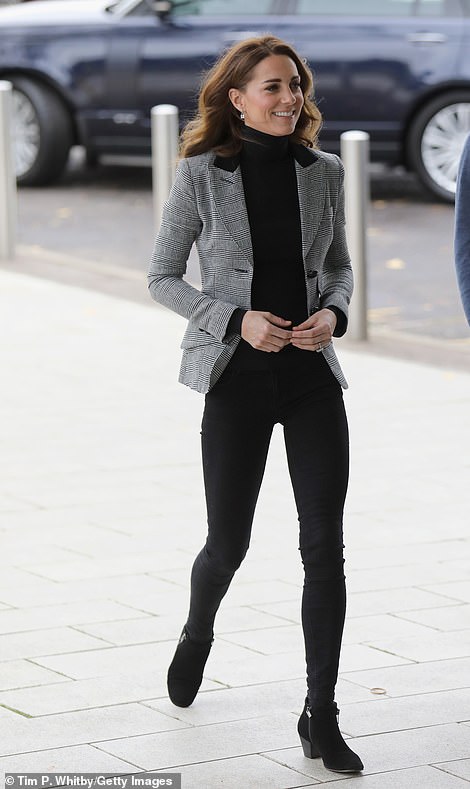 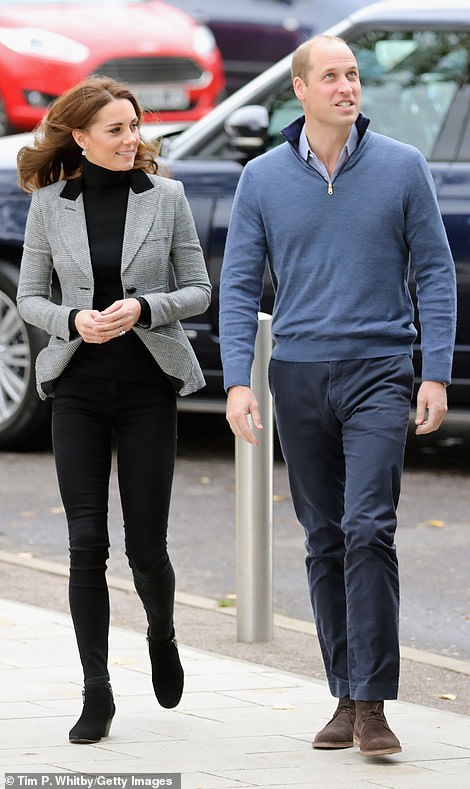 Smiling Kate went for the smart casual look, teaming her blazer with black skinny jeans and ankle boots for the occasion. Kate was joined by her husband Prince William who also cut a casual figure in a blue zip up jumper and navy chinos 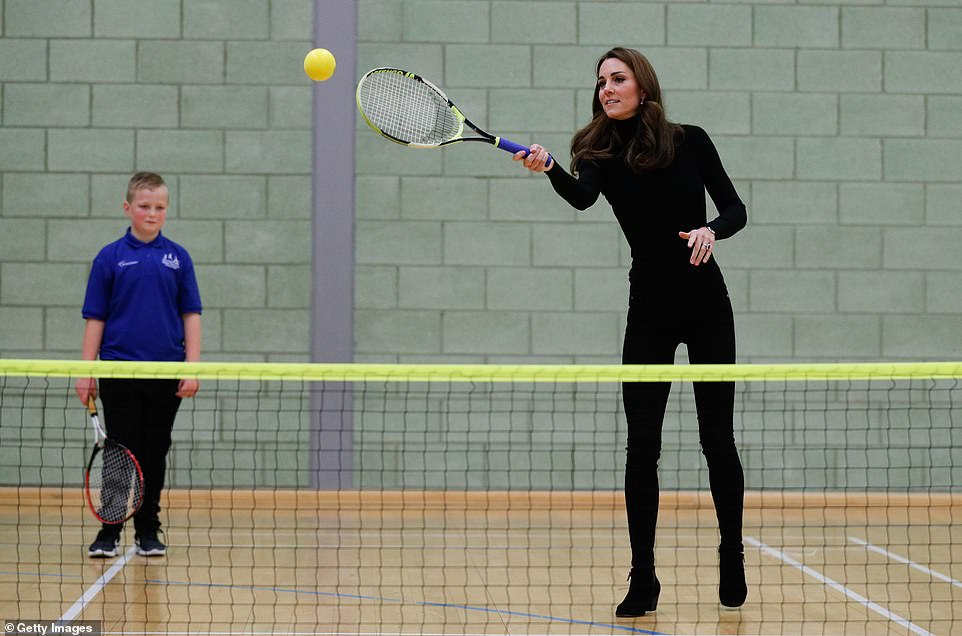 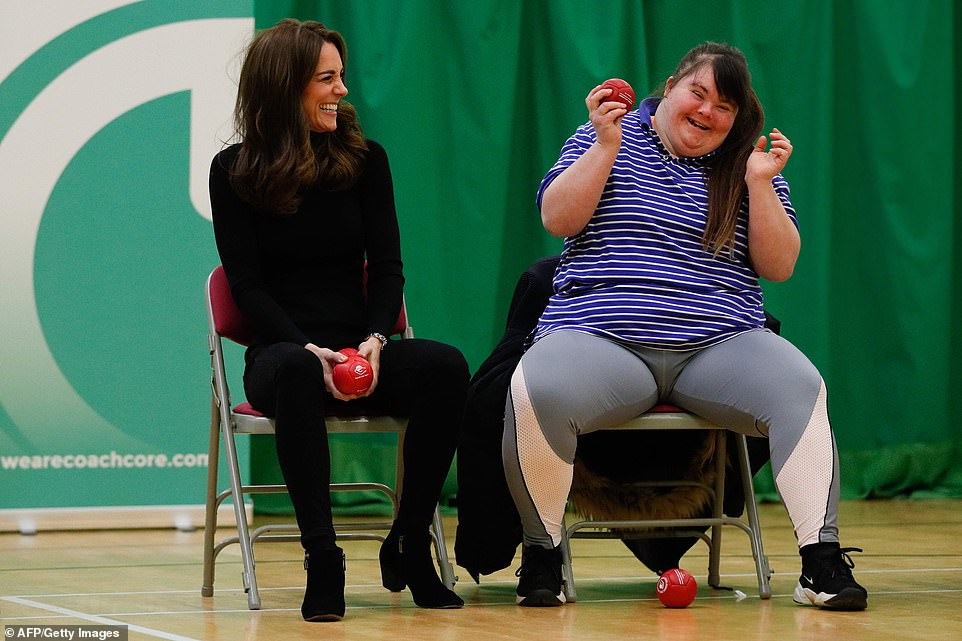 A fun day out! Kate couldn’t contain her giggles as she enjoyed a game of boccia – a seated game, where competitors throw a ball as close to a target as they can- with a young apprentice during a visit to Basildon Sporting Village 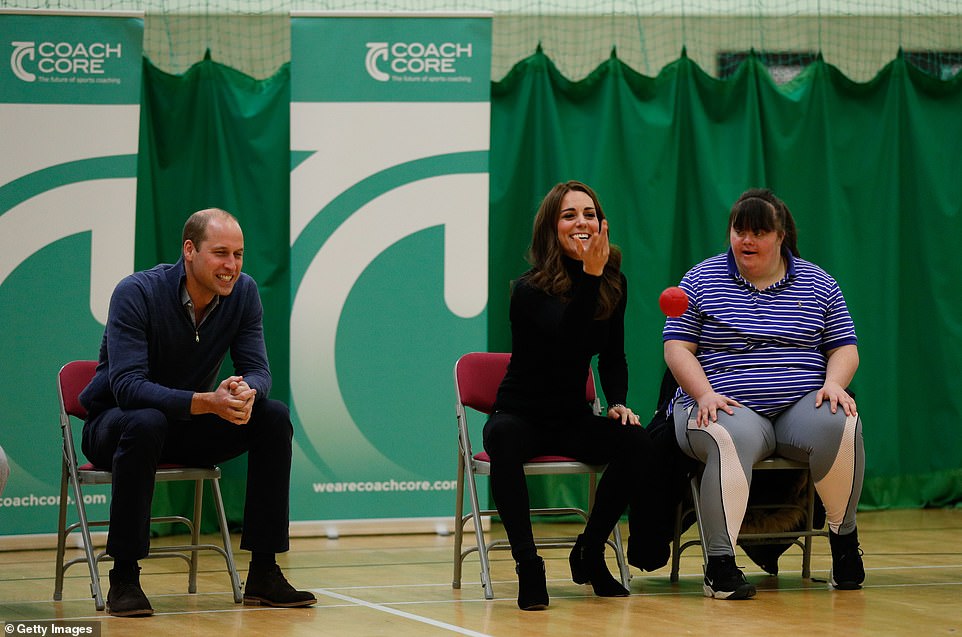 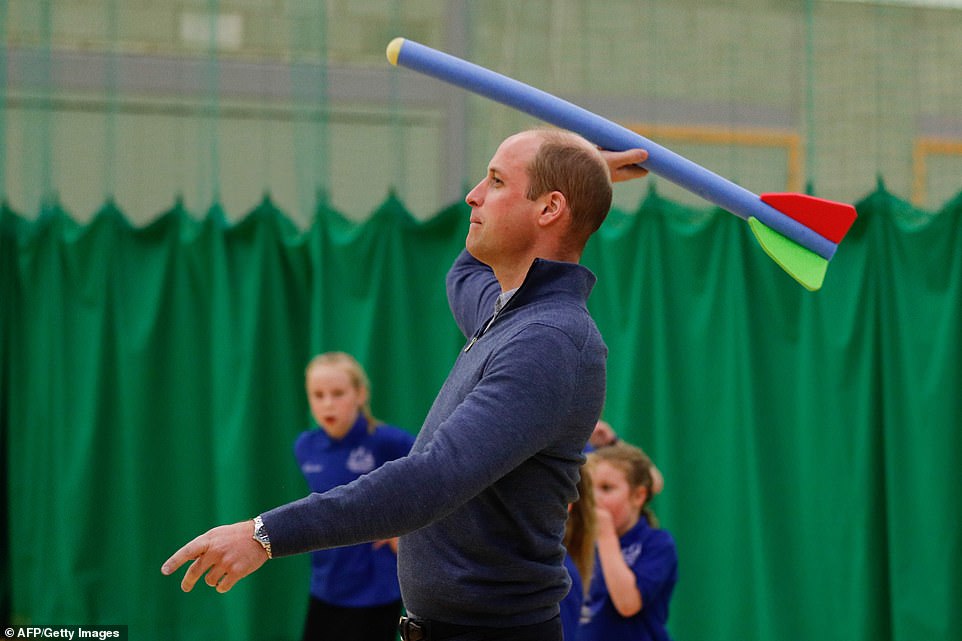 Showing off his sporty side! The Duke of Cambridge, throws a foam arrow as he joins a session with a group during a visit the Coach Core Essex apprenticeship scheme at Basildon Sporting Village 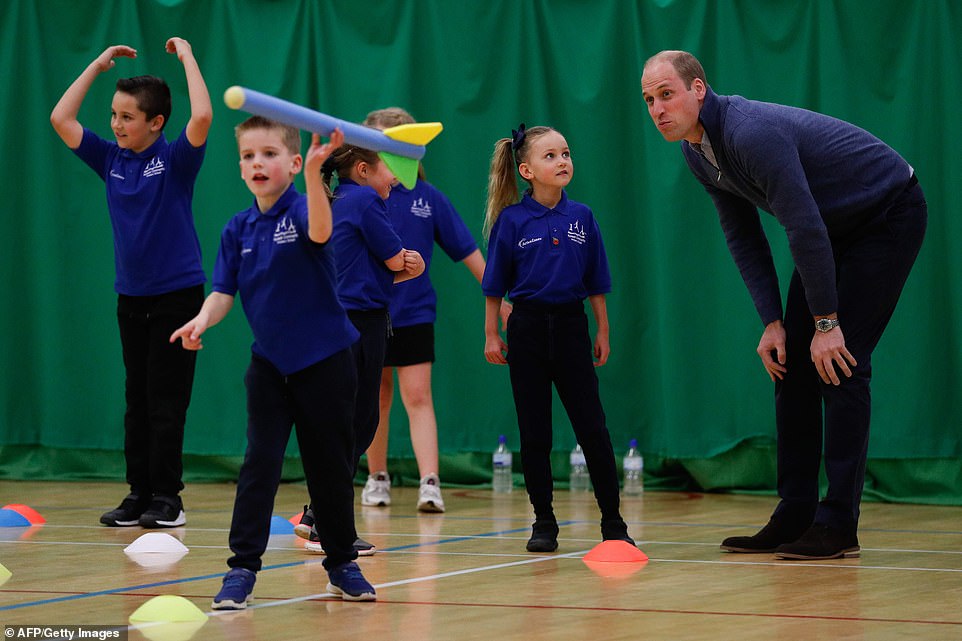 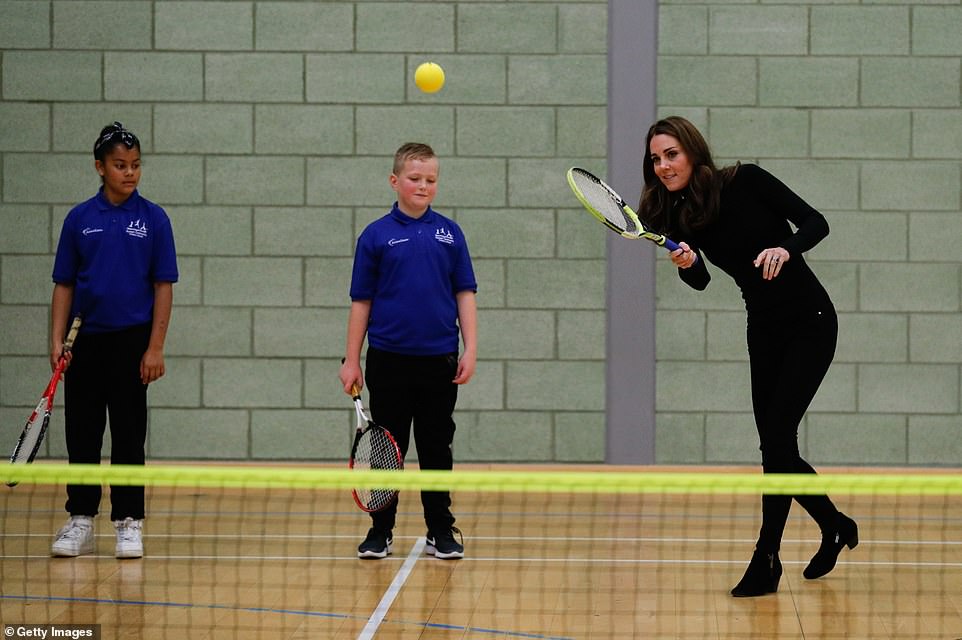 Showing off her skills! The Duchess looked confident on the court as she joined in a game of tennis with school children who are being trained by Coach Core apprentices 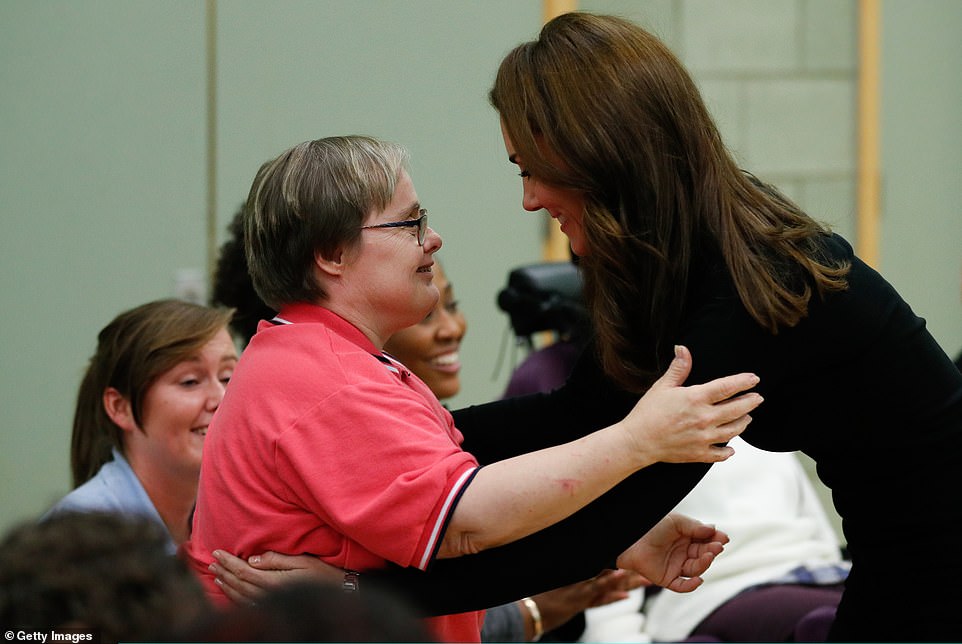 Her royal hugness! Kate embraced a boccia player as she met people who play the sport regularly at Coach Core Essex

Through training, the initiative aims to create the next generation of sports coaches who will themselves go on to inspire their communities.

The royals will meet apprentices working with two partner organisations: Sport for Confidence and South Essex Gymnastics club, who have been involved with Coach Core Essex since it was set up three years ago.

The Duchess has gradually been taking on more royal engagements since returning to work earlier this month after the birth of her third child, Prince Louis. 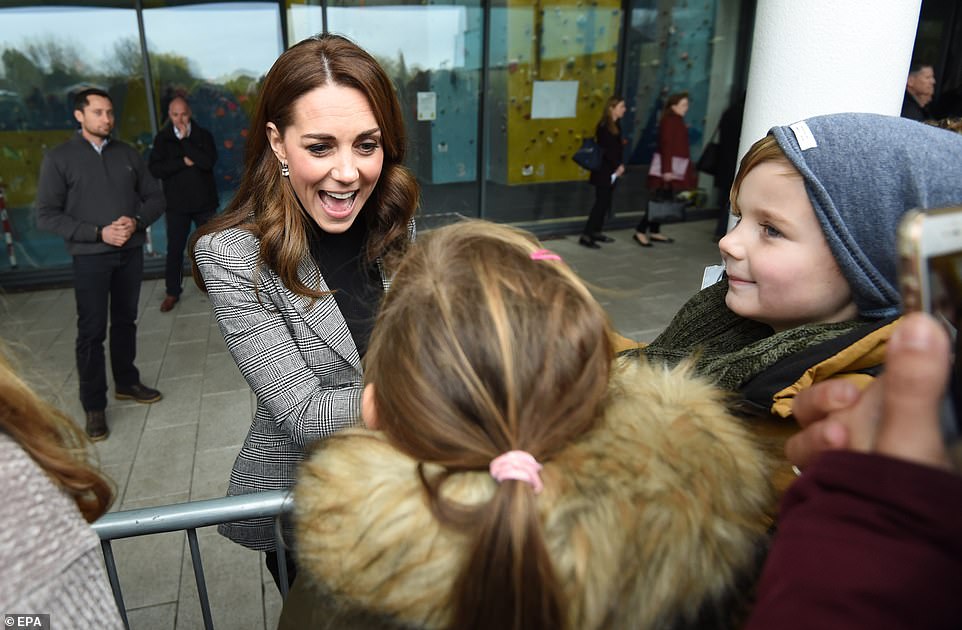 Pleased to meet you! The Duchess of Cambridge was beaming with happiness as she chatted to youngsters outside Basildon Sporting Centre in Essex 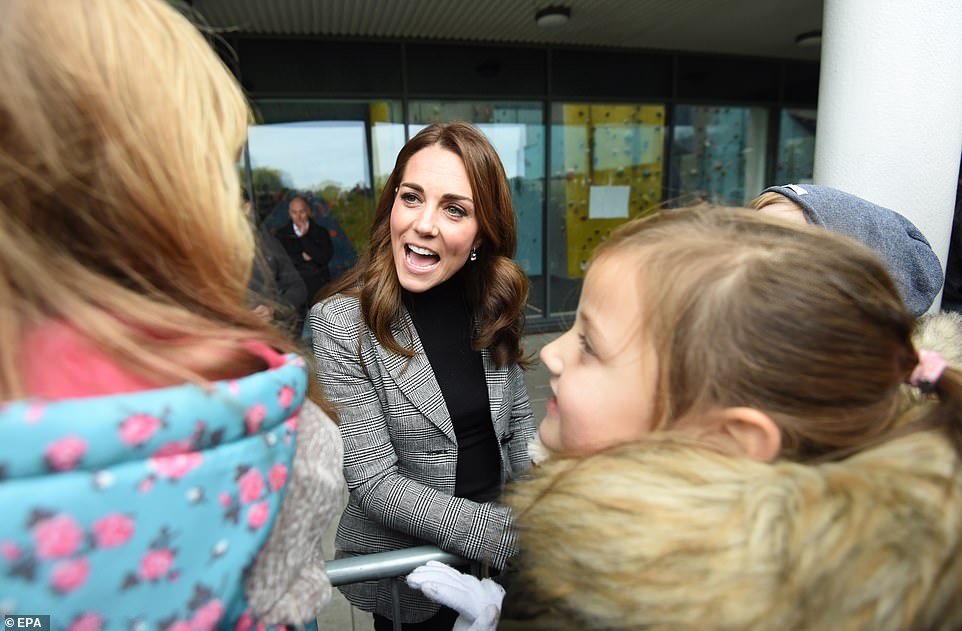 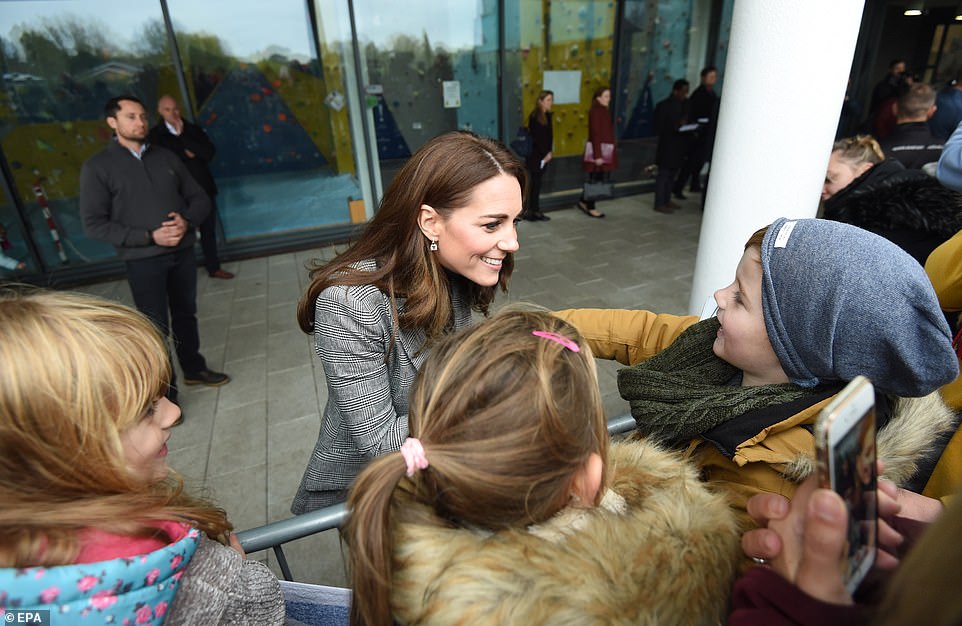 How do you do! A little boy who managed to get to the front of the crowd took the opportunity to shake hands with the visiting royal who was all smiles as they chatted 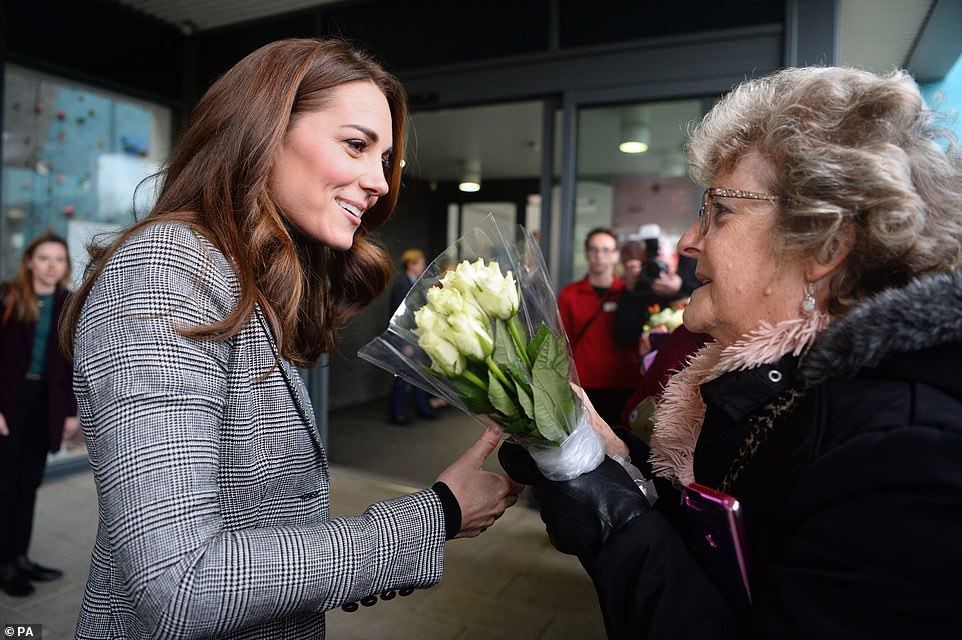 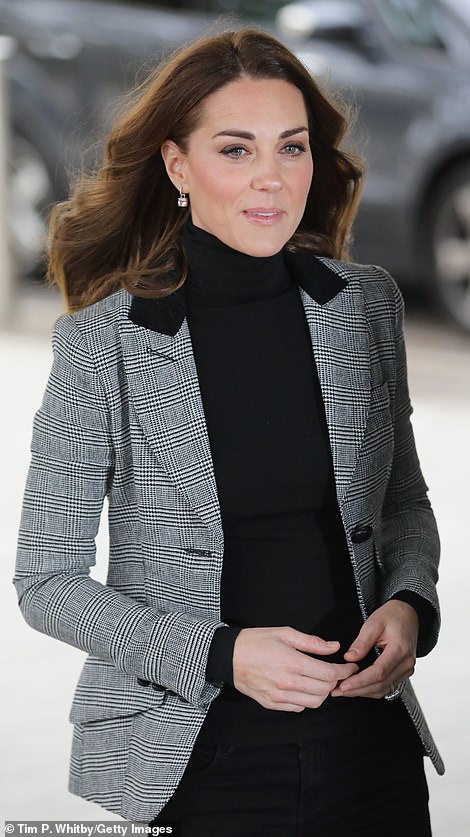 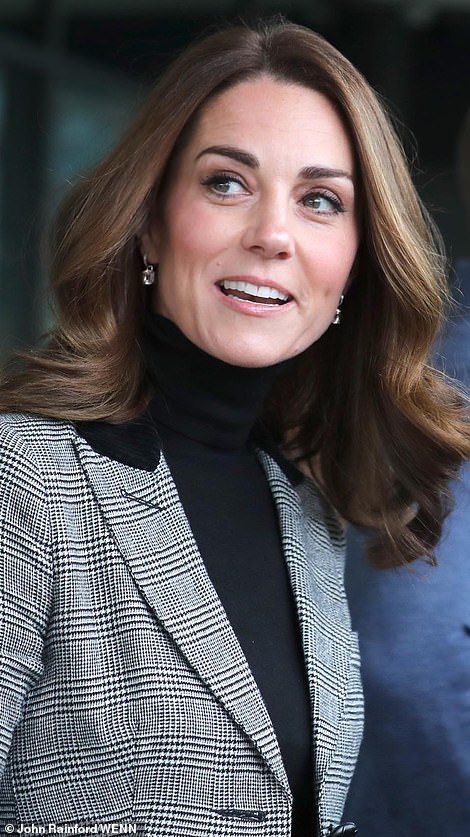 The Duchess accessorised with her favourite Kiki McDonough morganite topaz and diamond drop earrings and kept her make up minimal, allowing her natural glow to shine through 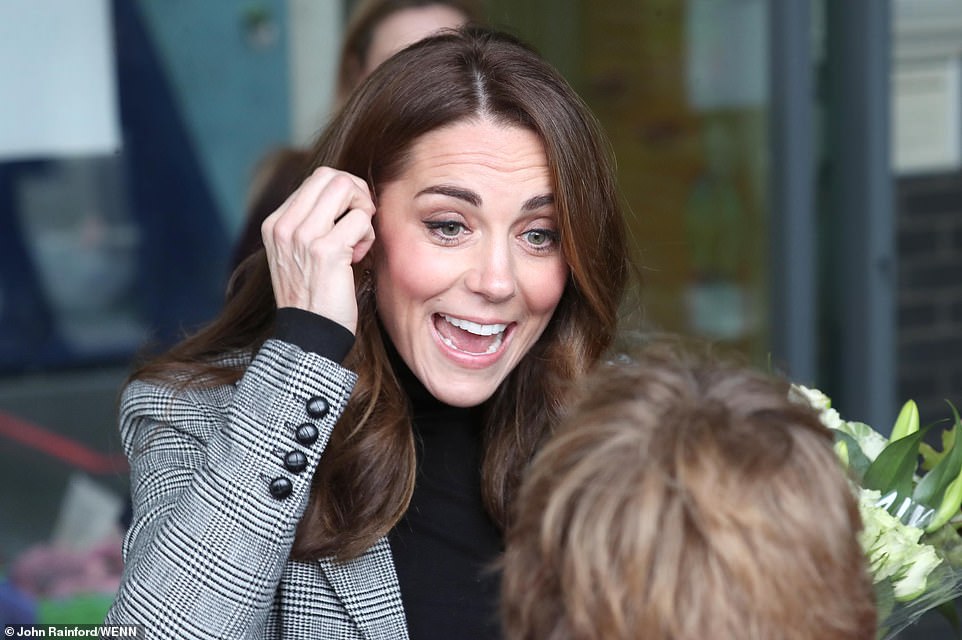 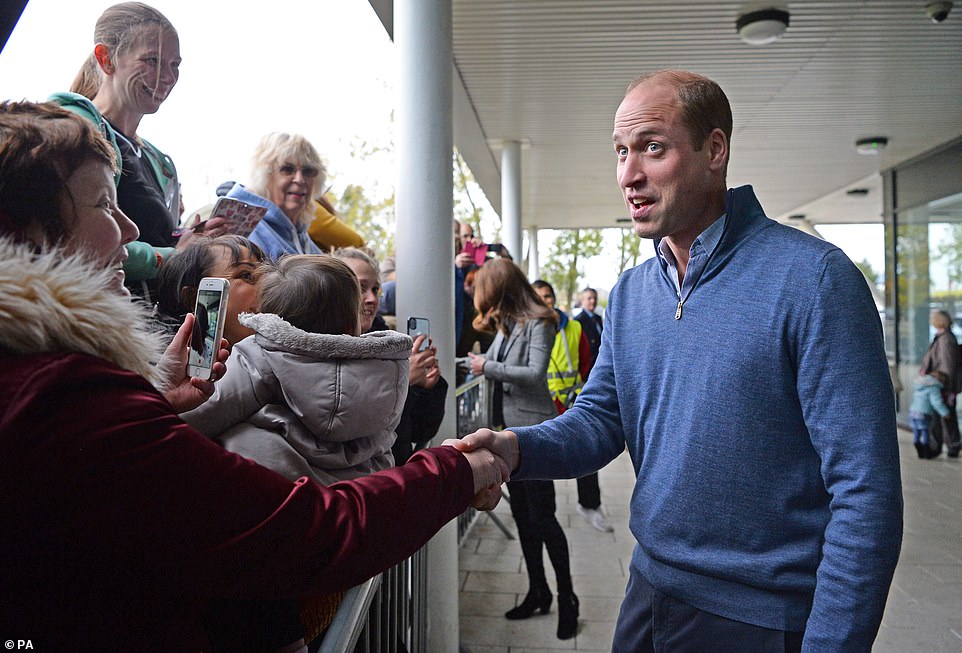 Taking style notes? The Duchess stepped out in an on-trend checked blazer teamed with skinny jeans and ankle boots. Her ensemble was reminiscent of the look her pregnant sister-in-law Meghan wore on arrival at Dubbo Airport earlier this month during the royal tour of Australia 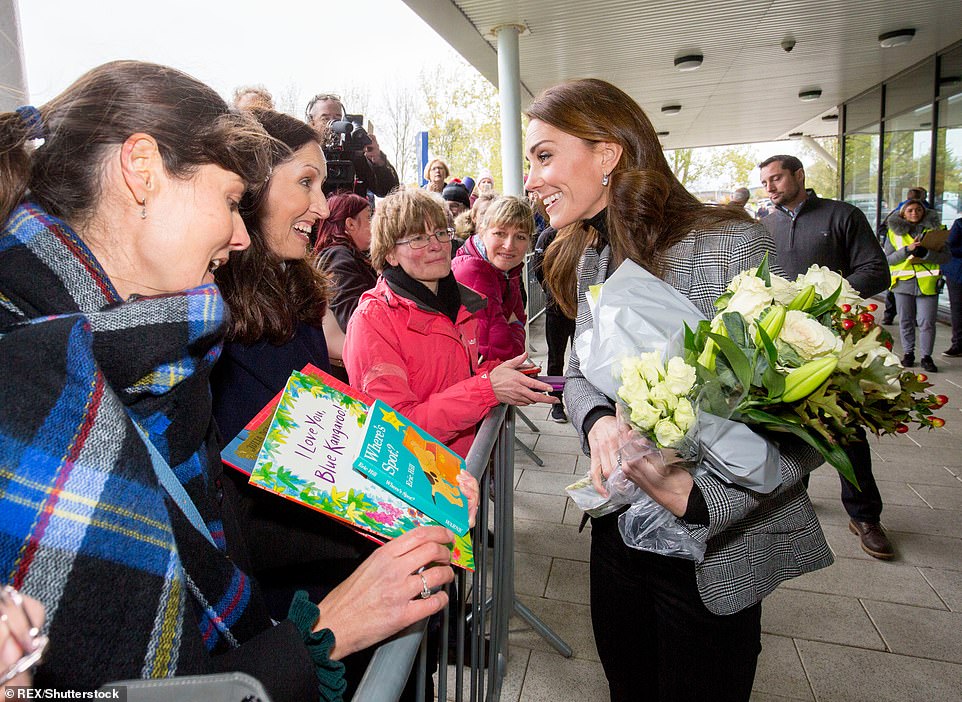 The Ducehss was presented with bunches of flowers by wellwishers, while one royal fan had brought along a selection of children’s books – no doubt a gift for Prince George and Princess Charlotte

She was seen at a handful of family events over the summer, including Prince Harry’s wedding and Trooping The Colour but has been enjoying time away from official duties since Prince Louis’ birth in April.

Even though Kate was resumed royal duties, her ‘primary focus’ will be her children throughout the Autumn, according to palace aides.

Meanwhile, her sister-in-law Meghan and Prince Harry have been the focus of attention in recent weeks as they complete their first major official overseas tour as a married couple. 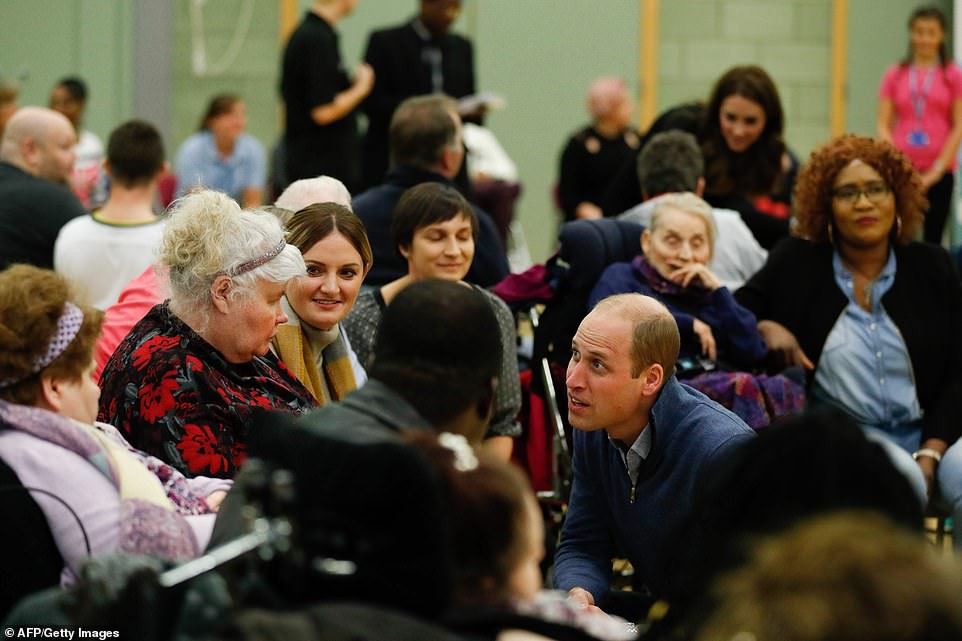 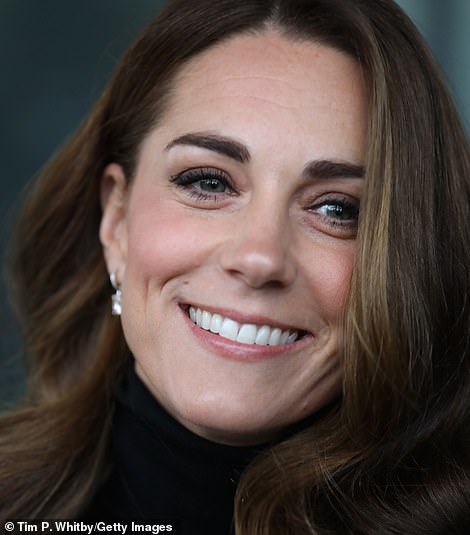 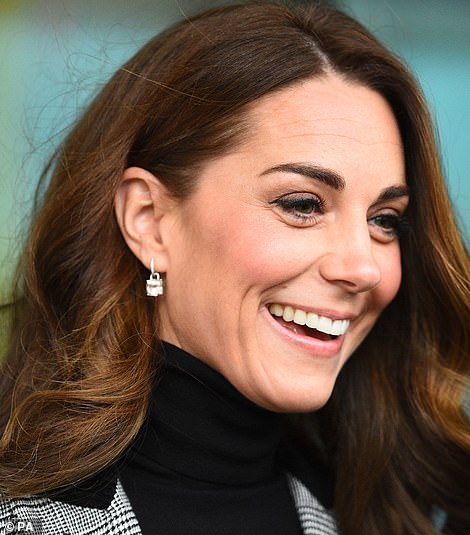 Back to her best! The Duchess resumed official royal duties earlier this month following her maternity leave. Kate looked glowing as she smiled her way through a visit to Coach Core Essex 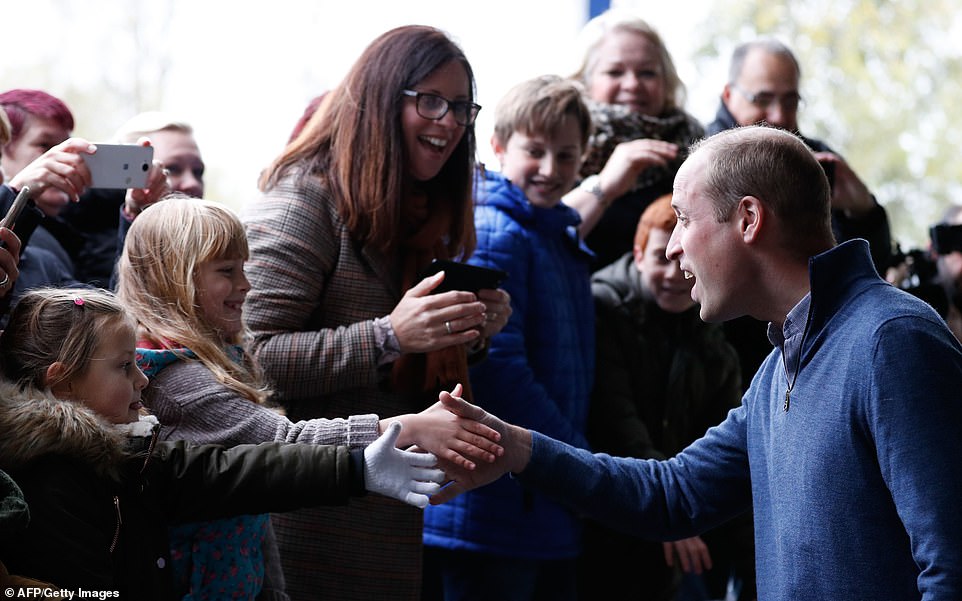 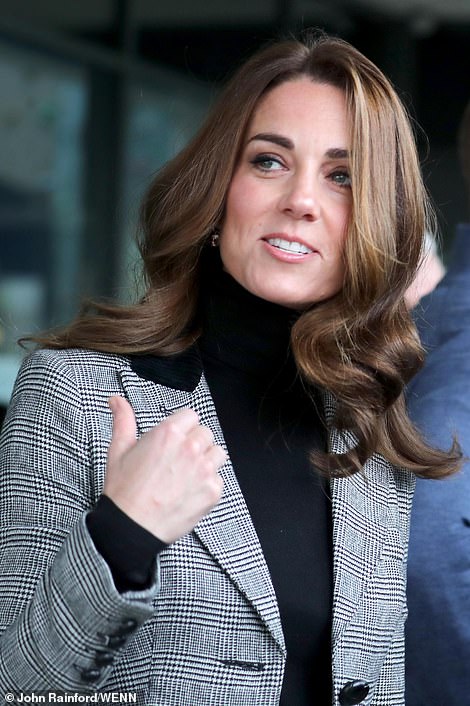 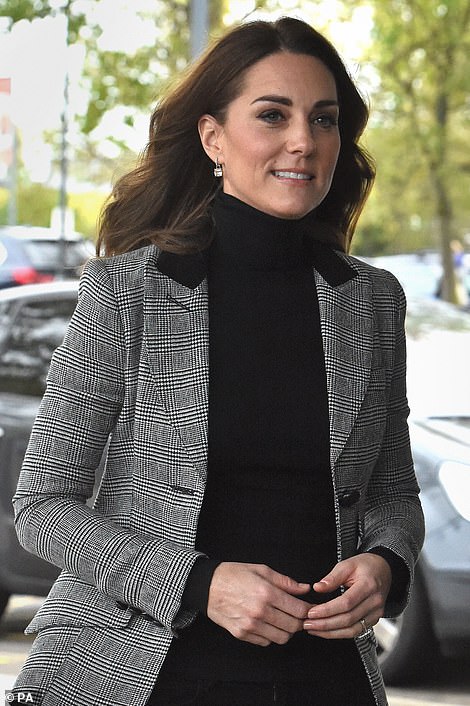 Cheerful Kate spent time chatting with members of the public outside Basildon Sporting Village ahead of her visit to Coach Core Essex. Today the Duchess will meet young apprentices who are pursuing a future in sports coaching