Ecology: Beekeeping has become TOO trendy and almost unsustainable in some urban areas, study warns

Beekeeping has become TOO trendy and almost unsustainable in some urban areas because there is not enough nectar and pollen to go round, study warns

Urban beekeeping has grown so trendy that it may be doing more harm than good — with the practice becoming unsustainable in certain areas, a study has warned.

The ‘World’s Plants and Fungi 2020’ report from the Royal Botanic Gardens, Kew said that cities like London now have too many hives for the available nectar and pollen.

Bee colonies rely on having ready access to flowering plants, shrubs and trees to survive and stay healthy.

The experts warned that honey bees can monopolise flowers and outcompete wild colonies — along with accidentally spreading disease to these ‘cousins’ as well.

Urban beekeeping, pictured, has grown so trendy that it may be doing more harm than good — with the practice having become unsustainable in certain areas, a study warns (stock image)

‘This revelation will surprise many who think that keeping bees is a great thing for the environment,’ said Royal Botanic Gardens, Kew researcher Phil Stevenson.

‘Unfortunately, it isn’t always the case. The public need to be much more aware of the importance of pollinator diversity and how organisms interact, so that we can conserve all urban wildlife more effectively.’

The report highlighted the importance of wildlife such as bees to city trees — many of which depend on pollination by animals and which are cities’ ‘unsung heroes’.

Trees deliver benefits including capturing pollutants, reducing flooding by soaking up rain, lowering temperatures through shading and tackling climate change by storing carbon — and thus have the potential to help with future weather extremes.

But the report said that there is a need for more diversity in the trees that are presently planted being in British cities. 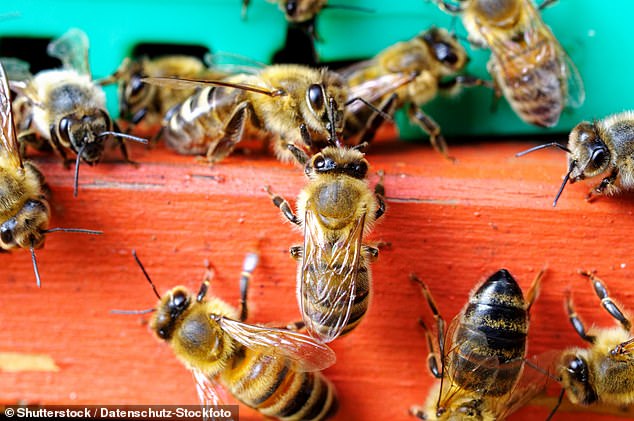 The ‘World’s Plants and Fungi 2020’ report from the Royal Botanic Gardens, Kew said that cities like London now have too many hives for the available nectar and pollen

A greater diversity of trees is needed to help them cope with pests, diseases and climate change — with the planting of more exotic species potentially called for.

In addition, the report called for officials to ensure that trees have good soils with the fungi they need to grow, so they can survive the harsh city environment with its disturbance, pollution, drought and heat — and deliver important natural services.

The full findings of the World’s Plants and Fungi 2020 report were published on the Royal Botanic Gardens, Kew website.