Of all the setbacks that have befallen Prince Andrew since his old friend Jeffrey Epstein was found dead in a New York prison cell last August, this will be one of the most painful.

I can disclose that the golf tournament Andrew took such pride in organising for young people has been axed after 20 years.

‘It’s terribly sad because it combined two of his great passions, golf and encouraging young people,’ a friend of the Queen’s second son tells me.

The Duke of York Young Champions Trophy — unique in allowing male and female junior golfers, all aged 18 or under, to compete against each other — grew into one of the most important competitions in junior golf, attracting top-class competitors from around the globe.

But it has become the latest casualty of the Epstein scandal, which intensified after Andrew’s ‘car-crash’ Newsnight interview with Emily Maitlis last year, causing his charitable activities to implode.

The Young Champions Trophy was run by DOY Youth Development — a subsidiary of the Prince Andrew Charitable Trust — which has just been wound up, ceasing all operations in the process.

It’s a very personal setback for Andrew, a passionate and highly proficient golfer who boasts a handicap in single figures. 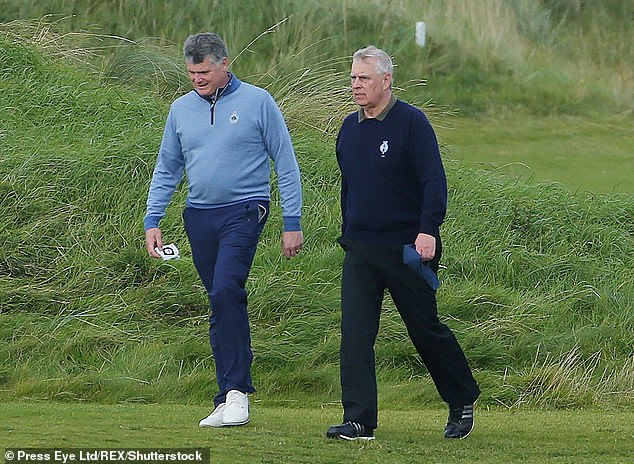 Of all the setbacks that have befallen Prince Andrew since his old friend Jeffrey Epstein was found dead in a New York prison cell last August, this will be one of the most painful

‘This tournament is an opportunity for young boys and girls from all over the world to play in the UK on some of our best courses,’ he wrote on the Young Champions Trophy website.

‘There are so many talented young sportspeople and I intend to assist with their endeavours.’ In years past, Swedish star Anna Nordqvist and the current world No. 1, Ulsterman Rory McIlroy, were among the budding talent seen on the fairways.

Andrew made huge efforts to ensure that he was in attendance to appreciate the young titans at play, even using a helicopter of the Queen’s Flight in 2010 to speed him from Windsor to Royal St George’s in Kent — and back again. 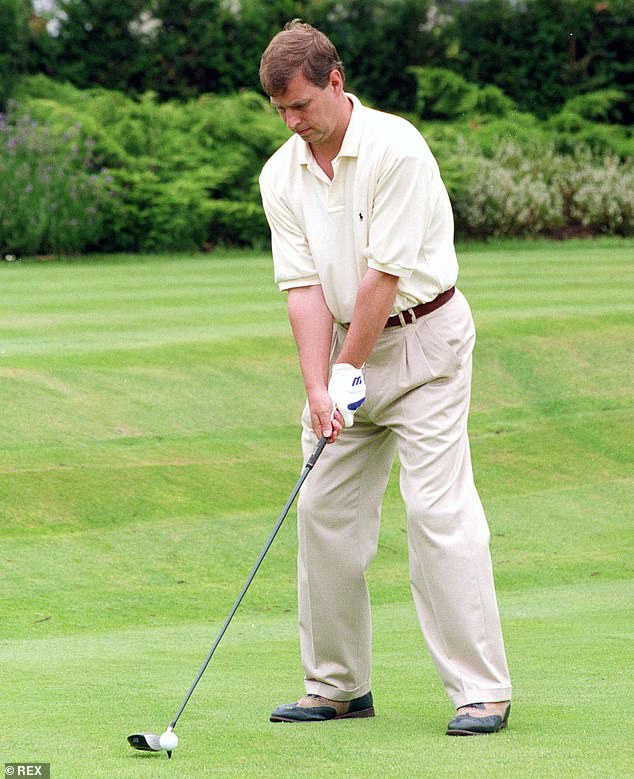 It’s a very personal setback for Andrew, a passionate and highly proficient golfer who boasts a handicap in single figures

While many feel let down by the Duke and Duchess of Sussex for quitting royal duties, Mike Tindall has come to their defence.

‘The only thing I want them to be is happy,’ says the former England rugby star, who’s married to Prince Harry’s cousin Zara.

Speaking on the BABC LA podcast, Princess Anne’s son-in-law adds: ‘They have got to find their way and, as long as they’re happy and Archie is happy, then that is all you can ask for them. I am sure they will do that.’

This is turning out to be a surprisingly happy time for Rolling Stones guitarist Keith Richards. Not only have the wrinkly rockers just released their first new song for eight years, but his daughter Dandelion has got engaged.

Dandelion, 48, who uses her middle name Angela, became known as the ‘baby who almost broke up the Stones’ after Keef accused Mick Jagger of fathering her with his girlfriend Anita Pallenberg while he was high on drugs. Pallenberg died in 2017.

Angela is to marry Graham Whitney, who will be her second husband. Her stepmother, the former model Patti Hansen, says: ‘We are so excited and can’t wait to celebrate together.’

Should be a blast! 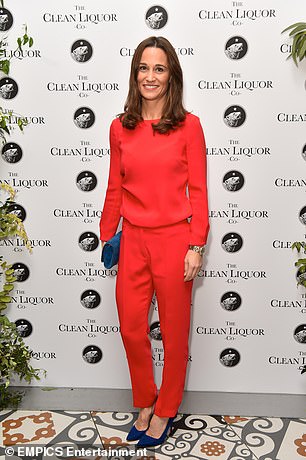 Mocked for the occasionally predictable entertaining advice in her party-planning book Celebrate, Pippa Middleton does, in fact, have some inspiring tips.

Spencer Matthews — whose brother, James, is married to Pippa — reveals the Duchess of Cambridge’s sister prompted him to set up his ultra-low-alcohol business, The Clean Liquor Company.

‘I went around to James and Pippa’s house and I was offered a non-alcoholic gin and tonic and I couldn’t believe my ears,’ says the formerly louche Made In Chelsea star, who gave up booze two years ago.

‘It kind of struck me, how have I never heard of this? I’ve been making all of this noise about being sober and nobody has offered me a non-alcoholic gin and tonic — and I love a G&T.’

Speaking to former Waitrose boss Lord Price on the Engaging Works podcast, he adds: ‘Pippa poured me a Seedlip and tonic and I became just obsessed with it.’

Pasternak claims Prescott plagiarised her book Lara: The Untold Love Story That Inspired Doctor Zhivago. Prescott and Penguin Random House, her publisher, say Pasternak’s claims are without merit and will be robustly defended.

He’s tipped to be the next James Bond, but screen heart-throb James Norton couldn’t have looked less like the suave spy as he escaped from lockdown this week.

While 007 would opt for a vodka Martini, ‘shaken not stirred’, the 34-year-old, below, sipped a cuppa outside the South London home he shares with actress girlfriend Imogen Poots.

Barefoot and wearing a T-shirt and shorts, the unshaven star held a mug printed with the words: ‘Probably the world’s best window cleaner.’ 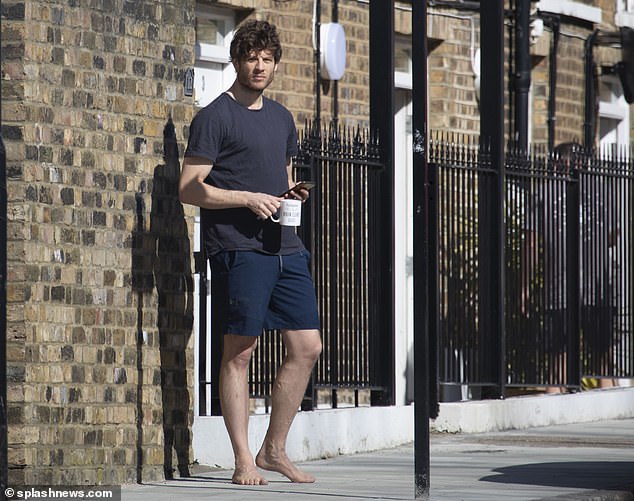 While Meghan Markle can no longer use her HRH, the mother of her youngest bridesmaid has gained a title. Zalie Warren’s mum will now be Lady Zoe because of the death of a distant relation, the 13th Earl of Galloway. Her husband, Jake Warren, is a godson of Princess Diana and close pal of Prince Harry. A friend jokes mischievously: ‘Perhaps Meghan should now curtsy to Zoe.’ 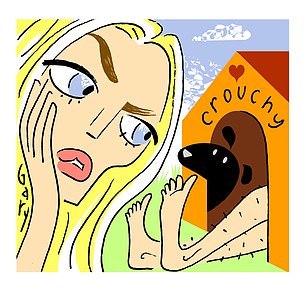 His model wife Abbey Clancy reveals the 6ft 7in sportsman is taking refuge with their new black labrador, whom they have imaginatively named Crouchy.

Is he trying to get away from their four children? ‘And wife,’ jokes former Strictly winner Abbey.

‘The dog cage is the biggest one we could get on Amazon. Pete loves getting in the cage with the dog. He’s trying to train him with little biccies. He’s a good trainer.’

Financier Ben Goldsmith, whose 15-year-old daughter Iris was killed in a tragic accident on their farm in Somerset last year, has a new baby girl.

And in a poignant tribute, Ben and his society caterer wife, Jemima, have given their daughter the middle name Iris.

She is Vita Iris Goldsmith and was born prematurely two weeks ago. She has been in intensive care until yesterday. ‘Thanks to the brilliant doctors and nurses’, Vita staged ‘a miraculous recovery’ after a ‘terrifying’ fortnight, reveals Ben’s sister, the film producer Jemima. 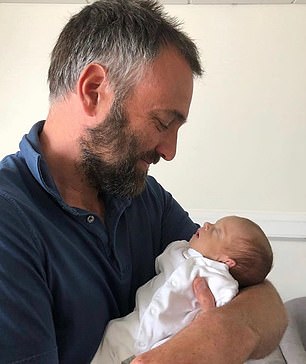 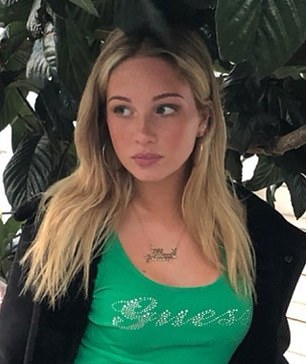 Financier Ben Goldsmith (left), whose 15-year-old daughter Iris (right), was killed in a tragic accident on their farm in Somerset last year, has a new baby girl

Colourful socialite Amanda Eliasch, who hit the headlines when she auctioned off her collection of sex chairs, refuses to be confined to her Chelsea home.

‘I do like walking with him because he goes for really long walks,’ she tells me. ‘But we’re not going out together.’ So to speak…

With hairdressers shut, Joanna Lumley has come up with an absolutely fabulous way to make sure her locks stay stylish.

‘I’ve always done my own,’ the Ab Fab star tells me. ‘Go and buy stuff from the supermarket and put it on. If you haven’t got any scissors, get some and start cutting. All you have to do is get a mirror and snip away like mad and dye it.’