An eight-foot deep sinkhole opened up on a street in front of the Pantheon in Rome, revealing several ancient paving stones dating as far back as 27BC.

The sinkhole is 10 feet long and opened unexpectedly on an otherwise quiet Sunday afternoon on a cobblestoned street in the Piazza della Rotunda, near the Pantheon’s front steps.

The area had been closed to the public at the time so no one was injured, but during tourist season the event could have caused much more damaging.

A sinkhole opened up on the streets of Rome, revealing seven well-preserved paving stones dating back to 27BC

The paving stones below the surface appear to have been used in the streets around the Pantheon when it was first built, and which were subsequently paved over after a series of reconstruction projects in the first century AD.

According to a report in the Smithsonian, city officials had been aware the ancient paving stones were present below the surface but decided against any larger excavation project, fearing it would be disruptive.

The paving stones were unusually well preserved because they were mostly surrounded by pozzolan, a type of dirt with significant amounts of silicon dioxide that absorbs excess moisture and can help prevent rot.

The paving stones themselves were made from travertine, a common building material in ancient Rome used in the Coliseum and many of the city’s triumphal arches, which was easily sourced from quarries outside the city.

They’re caused by the destabilizing combination of the region’s sandy soil and layers of old ruins that much of the modern city was built atop, which weaken the ground above. 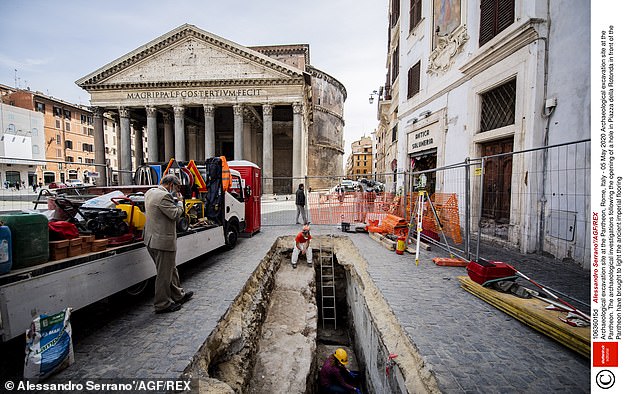 The sinkhole opened on a Sunday afternoon at a time when the Piazza della Rotunda was closed to the public, which helped ensure no one was injured 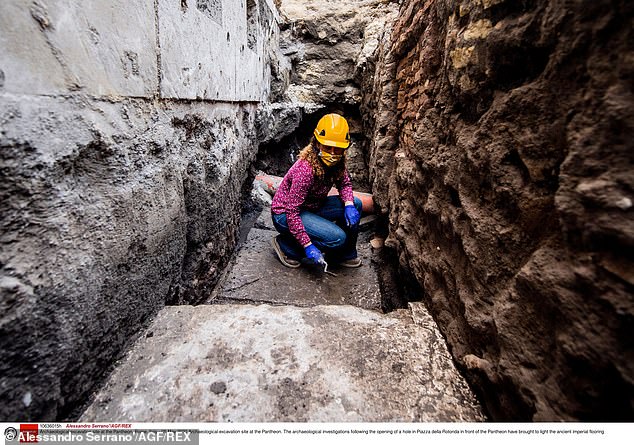 The seven slabs of paving stones were made from travertine, a commonly available building material sourced from nearby quarries in the countryside that was also used to build the Coliseum 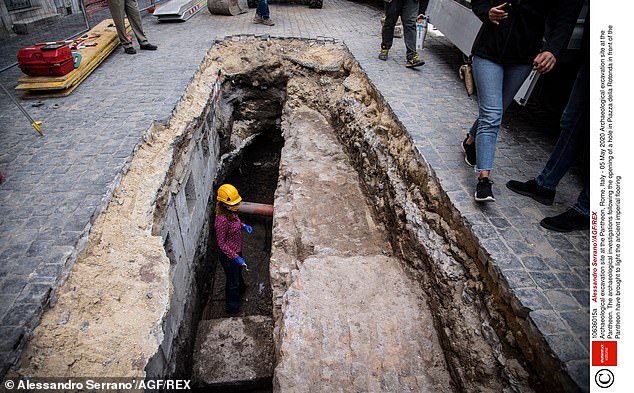 Sinkholes have become a surprisingly common phenomenon in Rome, with 100 reported in 2019, and 175 in 2018, caused by the city’s sandy and unstable ground and the layers of ancient structures buried beneath the surface

‘The most sensitive area is eastern Rome, where materials were quarried in ancient times,’ geologist Stefania Nisio told Adnkronos.

‘The main cause of a sinkhole in the city is the presence of an underground cavity.’

In 2018, Rome announced an $18.6 million project to reduce the number of sinkholes around the city, which mostly appear in the form of potholes rather than major historical sites.