An elderly woman pulling her shopping trolley was hit and killed by a scooter on Boxing Day.

The woman was in her 80s and was hit by the bike as she crossed South Road at Braybrook in Melbourne’s west on Wednesday.

Following the collision the uninjured male scooter rider attempted to help at the scene.

The silver scooter is believed to be made by Italian brand, Piaggio, who also make Vespa scooters.

The exact cause of the crash is still being investigated.

Sergeant Marty Wallace, from Westgate Highway Patrol unit, told media that police were still trying to piece together the details which led up to the collision.

‘She’s crossed the road for some reason and passed in front of the scooter,’ he said

‘(The scooter had) a motor and a fair bit of weight to it so unfortunately it’s caused the death today.’

Sergeant Wallace said the woman’s death should act as a a reminder to all road users to be alert while on the road.

‘Take care and not just if you’re driving,’ he said.

‘It’s about if you’re a pedestrian crossing the road, a motorcyclist – and the issues and risks that are represented there – everyone has to take care on our roads.’ 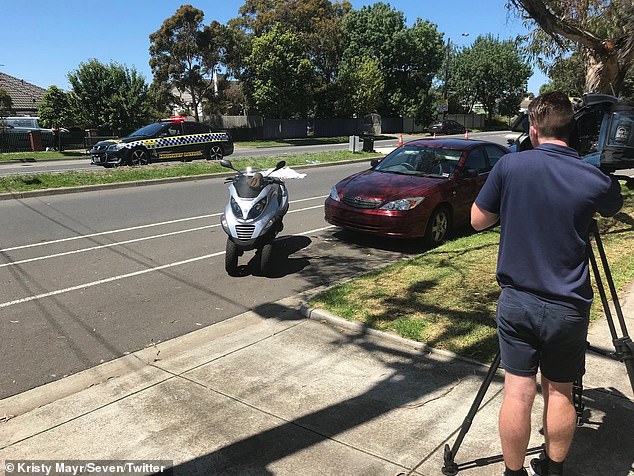