Eating plenty of protein could be the key to fighting heart failure in the elderly.

A study of more than 2,000 Europeans looked at, and compared, a person’s heart health with their protein intake.

It found that people who ate the smallest amount of protein had a 46 per cent higher chance of death than those who ate the most.

Experts believe that having a diet with a high protein content helps to build muscle mass, and can help keep the heart stronger for longer.

Protein can be found in large quantities in food such as nuts, eggs and meat.

Eating plenty of protein could be the key to fighting heart failure in the elderly, high amounts of it can be found in food such as nuts, eggs and meat. Scientists found that people who ate the least protein had a 46 per cent higher chance of death than those who ate the most (Stock)

Research led by the University Medical Centre Groningen, in the Netherlands, was presented yesterday at the World Congress on Acute Heart Failure in Vienna.

Koen Streng, a PhD student who headed up the research, told The Times: ‘We observed that in patients with heart failure, a higher protein intake is independently associated with better survival.’

Older people were involved with the study, with the average age being 68 and their protein consumption was monitored through analysis of their urine.

When the scientists accounted for external factors such as age and kidney function, they saw a huge disparity between those than consumed large amounts of protein and those that did not.

Nearly two years into the study, scientists found that almost a third of people (31 per cent) who has a low protein intake of less than 40g of protein a day had died.

This percentage dropped to just 18 per cent for patients who ate 70g or more.

Protein is abundant in certain foods, for example an average chicken breast contains 32g of protein per 100. 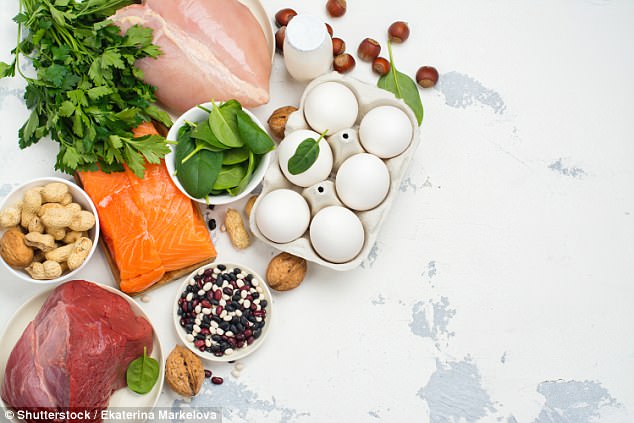 Almost a third of people (31 per cent) who has a low protein intake of less than 40g of protein a day had died. This percentage dropped to just 18 per cent for patients who ate 70g or more (stock)

HOW CAN A PERSON EAT 70G OF PROTEIN A DAY?

Protein is common in several different food sources and can get into the body in a variety of ways.

Chicken is a common source, with a 32g serving of protein for every 100g.

Eggs are another good source of protein to help contribute to the target of 70 grams a day.

One large boiled egg contains around 6 grams of protein.

Nuts are a great natural way of ingesting protein, with 100 grams providing around 20 grams of pure protein.

Nuts also contain a lot of natural fat, so a balanced diet is recommended.

Dairy is also a good source of protein, with 100 grams of cheese producing around 25 grams of protein.

A mixture of these foods can easily contribute to the target 70 grams of protein over the course of a day in a variety of meals.

As a person ages, their muscle mass and strength declines as their body becomes less efficient at converting protein into muscle.

About ten per cent of people aged 70 or older have heart failure, which means they have difficulty pumping blood around the body and getting oxygen to their muscles.

Although this study shows a link between protein and heart health, the exact reason behind it remains unclear.

Mr Streng explained: ‘The study did not look at causes for this link, but it is likely that dietary protein builds muscle mass, which is beneficial for health in these patients.

‘A randomised controlled trial is needed to determine a recommended amount of daily protein intake for patients with heart failure.’

Protein is known as a macronutrient, and is one of the fundamental constituents of the human diet.

There are three macronutrient groups: protein, fats and carbohydrates.

The human body requires a large amount of all of these throughout the day.

Protein is essential for sustaining body mass, muscle density and heavily involved in important functions such as repairing body tissue.

Chemically, proteins are composed of amino acids, which are organic compounds made of carbon, hydrogen, nitrogen, oxygen or sulfur.

These small chemicals join to one another to create a protein, and are therefore commonly known as the ‘building-clocks’ of life.

Common sources of protein include poultry, fish, nuts and seeds.