Anthony Albanese has attacked Scott Morrison’s international credibility during a fiery interview with Alan Jones – after Grace Tame criticised the Labor leader for appearing on the shock jock’s show.

Mr Albanese sat down with the Sydney broadcaster in his new studio on Monday where he was quizzed on a series of issues from cost of living to foreign policy.

The former 2GB host asked whether Australians were right to be ‘genuinely worried’ about Mr Albanese becoming the country’s ‘face to the world’, before the Labor leader ripped into Mr Morrison’s own scandals.

‘As Prime Minister you would represent the nation around the world and even though they might dislike the Morrison government, they’re genuinely worried it seems about Anthony Albanese being Australia’s face to the world. How do you address that?’ Jones asked.

‘Well, I’ll tell you one thing I wouldn’t do … leak private text messages from other national leaders from our allies and that occurred, of course, with Emmanuel Macron with Mr Morrison,’ Mr Albanese replied.

‘I think that will cause world leaders to really pause in their engagement with him. And that was a real concern.’

The Labor leader was referencing the scrapped submarine contract with France that saw Australia reneg on a $90billion agreement to side with a US and UK-led program, angering Mr Macron.

The French leader told reporters ‘I don’t think, I know,’ when asked if he believed Mr Morrison lied to him, before text messages between Australian and French diplomates were leaked the following day.

The messages from an unnamed source were provided as proof that Mr Macron knew the subs deal was in trouble. 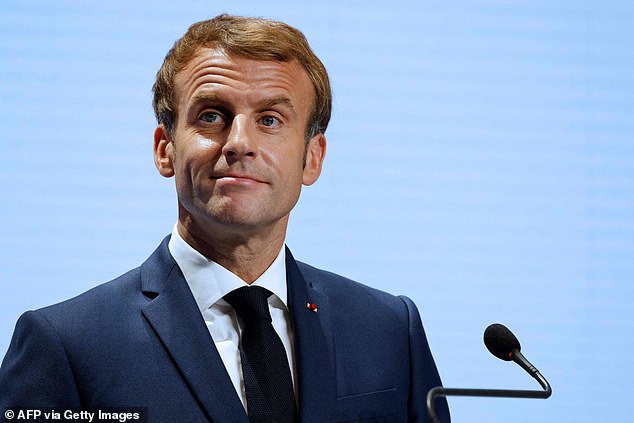 Mr Albanese suggested Mr Morrison’s office was behind the leaks, before insisting he already has relationships with many world leaders.

‘I have represented Australia at the first ever G20 meeting. I know President Biden; I know our allies; I have met Prime Minister (Boris) Johnson – I wouldn’t say that I know him well, but I met him when he was leader of the London Council.

‘I’ve been engaged in international forums for a considerable period of time as a senior minister in the former Labor government.’ 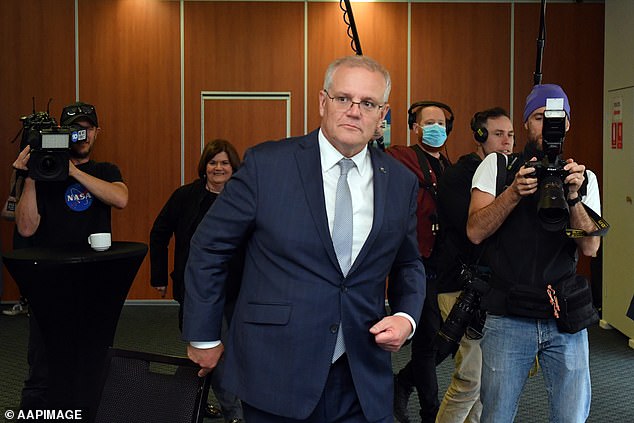 Mr Albanese’s interview with Mr Jones sparked headline earlier in the night when Grace Tame, who recently sat down with Mr Albanese for an interview with InStyle, shared the picture of the Labor leader and Mr Jones with the caption: ‘Side eye SIDE EYE’.

Until now, Ms Tame has been a vocal supporter of Mr Albanese with the pair having cosied up together to pose for photos at several high profile events.

It’s in contrast with the frosty relationship she has with the Prime Minister whom she has taken numerous swipes at since she was named 2021 Australian of the Year.

The side eye reference in Ms Tame’s latest tweet is believed to be in reference to her infamous encounter with Mr Morrison earlier this year. 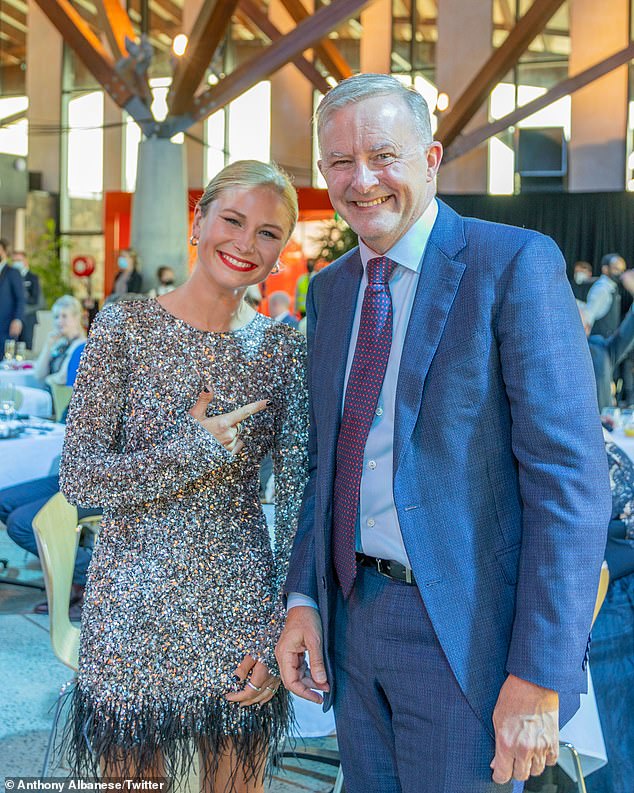 She expressed her bitter disapproval at Mr Albanese’s interview with the shock jock.

‘Yeah nah, this is where you could’ve just frowned and walked off. Or better yet, not done it,’ she tweeted.

‘There are plenty of other ways to broaden your messaging without enabling known agents of sexism and abuse. None of us is obliged to speak to bigots. The optics of this aren’t good.’

The Labor leader recounted to Ms Tame how his single mother, Maryanne, struggled to bring him up in her Camperdown council house in Sydney’s Inner West in the 1960s – bringing Ms Tame to tears.

Midway through the video link interview, Mr Albanese suddenly broke off his story when he noticed the tears streaming down Ms Tame’s face. 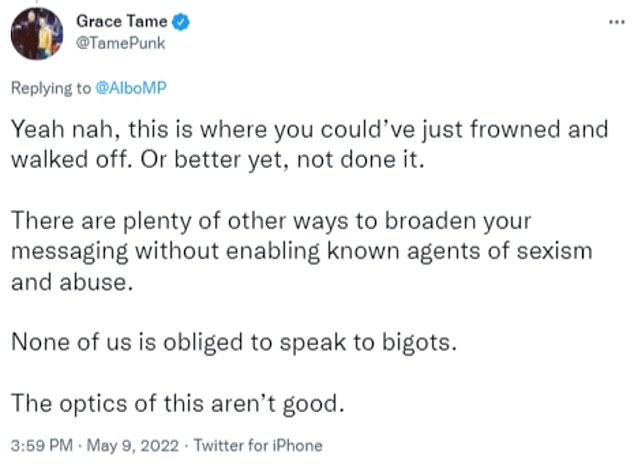 They also posed for a selfie on Australia Day, a day after Ms Tame’s frosty exchange with the Prime Minister.

‘With our legendary Australian of the Year, Grace Tame. She’s using her voice to stand up for survivors of child sexual abuse everywhere. Her strength makes Australia stronger,’ Mr Albanese tweeted at the time.

The angry outburst was sparked by Mr Albanese sharing a photo from his sit-down interview with the controversial broadcaster, which aired on Monday night. 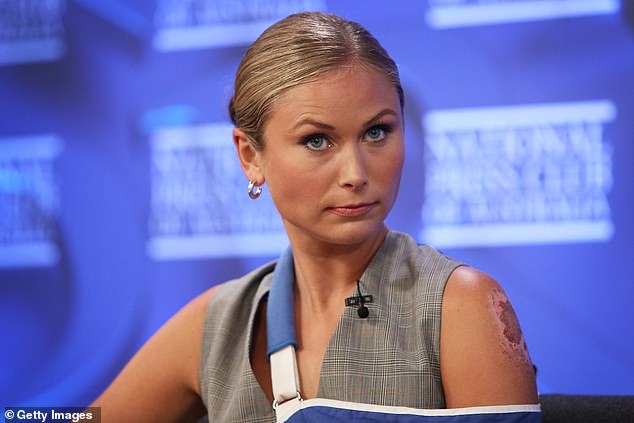 Commenters suggested Ms Tame’s discontent was misguided and that the Labor leader has a duty to speak to all areas of the public.

‘Can’t agree. As prospective PM, Albanese has a duty to reach those diametrically apposed to his beliefs. The show, whether you like Jones or not, allows for this – the possibility of changing hearts & minds. In no way does it enable Jones’ behaviours. That’s unfair,’ one wrote.

A woman added: ‘It’s politics, not a dinner invitation. He has to try to appeal to different voters. And he cannot be seen to be a ‘lefty’, as that now has a toxic association. It’s tough but that’s the reality.’

One man speculated whether the photo may not be all as it seemed.

‘That’s not a smile, it’s gritted teeth,’ he wrote. 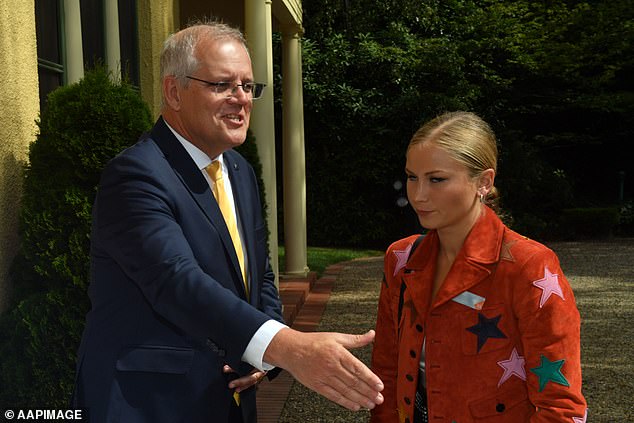 It comes as Labor has extended its lead over the Coalition but Mr Morrison still  remains Australia’s preferred prime minister, according to the latest Newspoll.

The Australian reported Labor now holds 39 per cent of the vote, compared to the Liberal and Nationals’ 35 per cent – the largest lead Anthony Albanese’s party has held during the current federal election campaign.

The Labor leader however still trails Mr Morrison in the PM vote 44-42, however Mr Albanese has climbed three points in the past week while the Liberals leader has fallen a point.

Labor holds a 54-46 lead over the Coalition in the two-party preferred vote, climbing for the first time since early April.

Skyrocketing cost of living prices have seen Labor tighten its grip on the election, with the opposition earning the confidence ahead of Mr Morrison’s government that has seen interest rates rise for the first time in 11 years.

Newspoll saw 44 per cent of voters put their confidence in Mr Albanese to better plan for rising costs, ahead of 41 per cent for Mr Morrison.