The billionaire’s startup is accused of violating the Animal Welfare Act with its experiments at the University of California, Davis, from 2017 through 2020, which ‘sacrificed all the animals involved,’ a former Neuralink employee, who asked to remain anonymous, told DailyMail.com.

One case stood out to them- a monkey sacrificed ahead of schedule due to errors allegedly made during surgery.

DailyMail.com previously obtained Neuralink lab notes that detail how a sealant was placed on the surgical holes, causing the monkey’s brain to swell and hemorrhage.

‘There was no reason to use it,’ the former employee, who worked as a necropsy technician, told DailyMail.com.

‘BioGlue was not FDA-approved for brain surgery and would never be able to be carried over to human trials. I cannot see something not approved on humans be used on primates.’

The neurosurgeon, Matthew MacDougall, developed the BioGlue and instructed staff to administer 15 to 20 milliliters when it should have been three to five, the person familiar with the matter said.

Handwritten lab notes show MacDougall ordered the monkey to be kept alive for days even though the animal ‘was declining postop and was ‘probably from cerebral edema.’

This monkey is just one of many animals ‘ sacrificed’ during Neuralink’s experiments, which helped the company develop its brain chip that Musk demoed last month while revealing it should be ready for human trials in the next six months.

Elon Musk’s Nueralink is under fire for allegations of animal cruelty during experiments at the University of California, Davis where implants were placed inside the monkey’s brains (pictured is a scan from the university showing the implant in an animal’s brain)

Musk wants to develop a chip that would allow the brain to control complex electronic devices and eventually allow people with paralysis to regain motor function and treat brain diseases such as Parkinson’s, dementia, and Alzheimer’s. He also talks about melding the brain with artificial intelligence.

The billionaire hosted a Neuralink Show and Tell on November 30, revealing the brain chip being used by monkeys to type on a screen using their thoughts.

These efforts were only made possible with testing conducted at the university that resulted in the death of some animals.

In the case of the BioGlue, the adhesive caused the brain to swell, which in turn put pressure on the brain stem, the former employee said.

‘[The BioGlue] caused negative outcomes, so the choice was to sacrifice the monkey and collect data,’ the person continued. 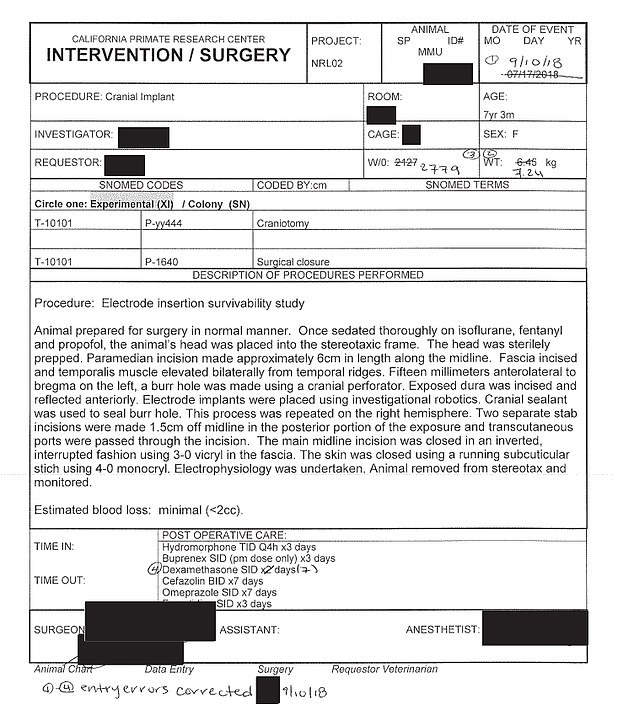 The monkey that received an excessive dose of BioGlue had surgery on September 10, 2018. The lab notes state a ‘cranial sealant was used to seal burr hole’ – the implantation site

The animal’s health declined, but the neurosurgeon required it to be kept alive for another 24 hours. Pictured are lab notes from Neuralink stating this

The necropsy notes all of the issues found in the euthanized monkey due to its declining health. The former employee told DailyMail.com that animals were also preserved while they were under anesthesia but still alive

The necropsy shows the monkey’s heart was ‘mildly enlarged,’ ulcers lined its esophagus and its stomach contained a large amount of brown-black flecked liquid.

The area of the brain with BioGlue was ‘surrounded by hemorrhage.’

However, the person involved with the experiments said the BioGlue was not FDA-approved.

The former Neuralink employee told DailyMail.com that this monkey and all animals in the experimental program were euthanized and preserved while it was still alive.

The person, however, also noted that the teams ‘cared a lot about the animals’ that had to be sacrificed.

‘Some were sacrificed close to or immediately after surgery to see what impact surgery had on the animal,’ the former Neuralink employee said.

‘The first macaque was tested with a dummy implant to see what reaction the implant would have.’

The person continued to explain that Neuralink did ‘a lot of testing on rodents,’ along with sheep and pigs. 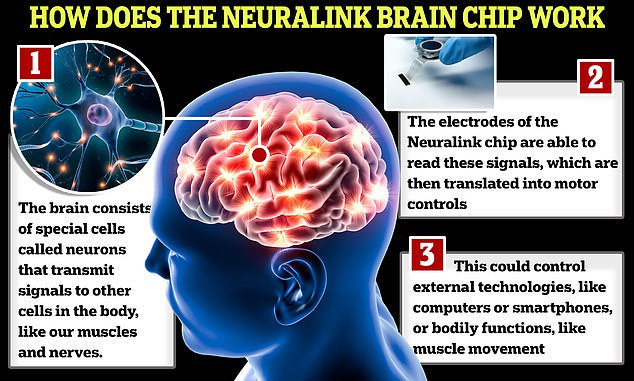 Elon Musk’s Nueralink revealed this week that it plans to test the chip in humans at least six months from now. The goal is to use the chip to help people with paralysis control technologies with their minds

They also confirmed MacDougall, who Neuralink hired in 2019, conducted the experiments because they remembered ‘he had an RIFD [Radio-frequency identification] chip so he didn’t have to have badge.’

On top of the Neuralink issues, Merkley said there is a problem with how the US Department of Agriculture (USDA) conducts inspections at facilities like UC Davis, which can simultaneously house up to 4,000 monkeys.

‘One person is there, at most, the better part of a work day,’ he said.

‘You can’t possibly inspect that many animals. This means they aren’t going around carefully looking at all the monkeys.

‘The USDA rarely ever strongly enforces the law with animals in laboratory experiments.’ 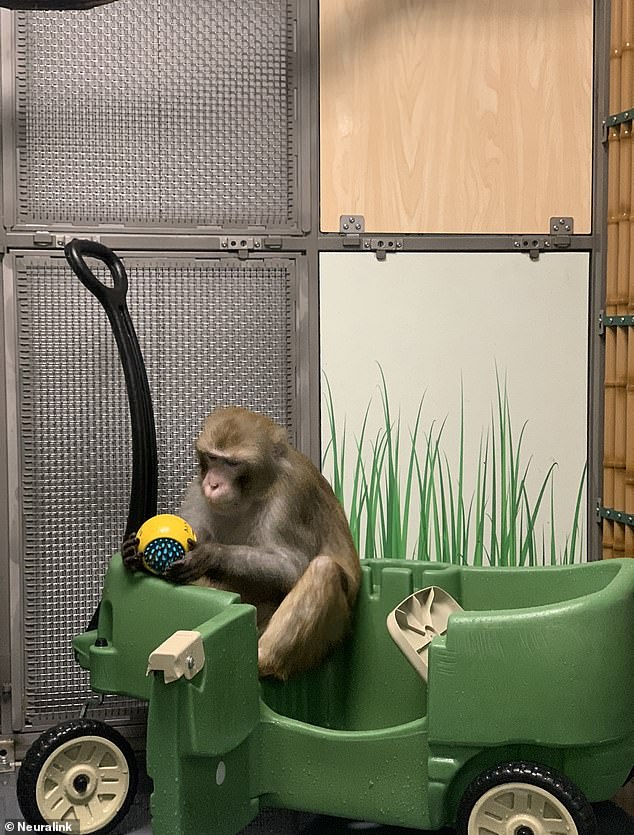 The Physicians Committee for Responsible Medicine filed a lawsuit against the University of California, Davis, where the experiments were held, claiming it has to hand over video footage and photographs of the experiments under California’s Public Records Act. Pictured is an image of a monkey shown on Neuralink’s website

The monkey that died due to the BioGlue is just one among at least a dozen used in the Neuralink experiments held at the University of California, Davis (UC Davis) from 2017 to 2020.

The Physicians Committee for Responsible Medicine (PCRM) provided DailyMail.com with the lab notes it received from UC Davis due to a lawsuit filed against the university by PCRM in February.

Neuralink was registered in California as a ‘medical research’ company in July 2016, and Musk has funded the company mostly by himself.

The technology will initially be used to help people suffering from severe degenerative brain disorders such as ALS, but it could have wider uses in years to come.

The lawsuit also seeks to obtain videos and photographs of the experiments, which PCRM said should be released because the records fall under California’s Public Records Act.

This law states that government records should be made available to the public upon request. Because UC Davis is a federally funded establishment, PCRM believes Nueralink’s records fall within the act.

On December 1, Neuralink was granted its request to intervene in the case.

Mark Kennedy, vice president of legal affairs at PCRM, who attended the December hearing, told DailyMail.com: ‘I suspect they fear that the records would be released because the university would not make the same arguments [Nueralink] would.

‘We are talking about work and activities done at a major university. So it is not like it is a private activity. These are state-funded and state-paid employees.’

Nueralink filed its answers against PCRM’s petition, which DailyMail.com obtained, that mainly states the firm ‘need not admit or deny’ the allegations.

However, Neuralink ‘denies’ allegations that it is portraying an image that it is not harming animals.

Joseph O’Dhoerty, head of Next Gen at Neuralink, who signed the Answer in Intervention, wrote: ‘To the contrary, Neuralink’s animal care program has a spotless record and has the distinction of never receiving a single citation from USDA inspections.’

The United States Department of Agriculture [USDA] inspected in March 2022 where ‘No non-compliant items were identified during this inspection.’

While O’Dhoerty’s statement may be true today, the experiments were conducted years before the inspection was done.

Ryan Merkley, PCRM’s director of research advocacy, told Dailymail.com: ‘If brain hemorrhaging is allowed and not cited, there is something wrong with Animal Welfare Act.

‘The Neuralink experimenter asked animal care staff to keep the monkey alive for a couple more days, which should also be a violation.’

Merkley noted that Neuralink did not report the monkey that died due to the BioGlue.