Boris Johnson came under increasing pressure to overhaul England’s A-Level marking system today after Nicola Sturgeon bowed to pressure to U-turn over a system branded ‘unfair’ by parents and teachers.

Thousands of English 18-year-olds are due to get their results on Thursday despite not sitting exams due to coronavirus, using a ‘standardisation’ system.

But Ms Sturgeon was forced to scrap the system in Scotland after pass rates for pupils in the most deprived areas were reduced by 15.2 per cent in comparison with 6.9 per cent for pupils from the most affluent backgrounds.

The methodology used by the Scottish Qualifications Authority (SQA) saw grades estimated by teachers downgraded based on criteria included the historic performance of the school.

This led to criticism that it unfairly penalised high-achieving students from schools with historically poor results.

Liberal Democrat education spokeswoman Layla Moran said: ‘Ministers must learn the lessons from the chaos over results in Scotland. We do not want to see more young people unfairly penalised by Covid-19 grade awards systems.

‘To prevent this, we need the government to make clear that individual pupils will be able to appeal their grade awards directly with Ofqual without charge, and to sit these examinations at no cost, when it is safe to do so, should they wish to.’

Ms Sturgeon admitted the Scottish government ‘did not get it right’, amid complaints that children have been punished to fit in with a model of how the overall results should look 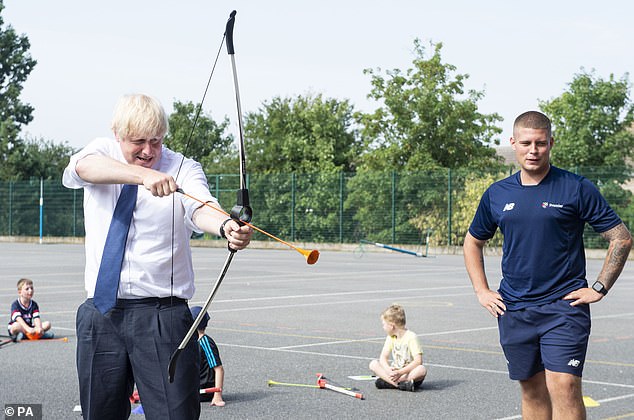 Thousands of English 18-year-olds are due to get their results on Thursday despite not sitting exams due to coronavirus , using a ‘standardisation’ system 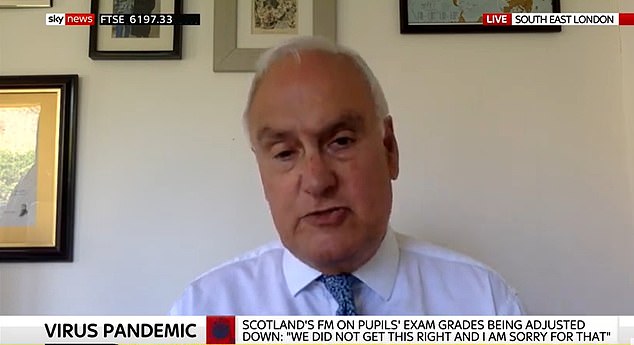 Former Ofsted chief Michael Wilshaw told Sky News: ‘I am concerned and I suspect a lot of other people will be very concerned that we don’t see a replication of what happened in Scotland’

How are exams being graded and what does it mean for uni places?

What could go wrong with results?

TO stop this year’s results being seen as worthless, both England and Scotland tried to shift teachers’ estimated grades down, so they matched the trends of previous years.

In Scotland this resulted in the ‘attainment gap’ between the richest and poorest being replicated, so that the ‘most deprived’ pupils had their marks reduced by 15.2 per cent, but the richest had reductions of only 6.9 per cent.

This affected the most talented pupils in poorly performing schools the worst, meaning those expecting top grades were dragged down because of their school’s record.

The outrage at the situation has led to a U-turn to be announced today.

How will appeals in England work?

PUPILS will not be able to challenge the grades their teachers decided. Appeals must be made by schools – not pupils.

They are likely to be successful if a school’s past performance is unlikely to be a useful measure of predictions.

Most importantly, appeals will now be allowed if ‘unusually high or low ability pupils [have] been affected because they fall outside the pattern of results’.

Schools will need to submit evidence, and there are worries over how long the process could take.

What if appeals fail?

FOR pupils who are told there is not enough evidence to appeal, or have it rejected, they will have only the option of resitting in the autumn. They will be able to use the higher of the two grades. In cases where pupils suspect racism or bias behind teachers’ decision-making, their only option is raise a complaint, rather than use the appeals process.

What about pupils hoping to go to university this year?

THE Education Secretary has said universities should ‘do all they can to ensure pupils can progress to higher education’.

Those pupils who miss out on an offer need to be ready to contact their university of choice and explain why they feel they should be admitted despite their marks, as they wait for appeals to be dealt with.

If pupils need to do resits, it may be possible to start their university courses in the new year, after sitting exams in the autumn and getting results before Christmas.

Schools were asked to submit the grades they thought students would have received if they had sat the exams. Exam boards have moderated these grades to ensure this year’s results are not significantly higher than previous years and the value of students’ grades are not undermined.

Last month, Ofqual said this summer’s A-level results would have been 12 percentage points better than last year if teacher-assessment grades had not gone through standardisation.

Former Ofsted chief Michael Wilshaw told Sky News: ‘I am concerned and I suspect a lot of other people will be very concerned that we don’t see a replication of what happened in Scotland, which has shown a large number of downgrades and a disproportionate number of downgrades of youngsters from poor backgrounds in some of the most disadvantaged schools.

‘That must not happen here, and I hope Odqual, the regulators of exam systems in England, are aware of the dangers of that, and are going to be taking remedial steps if that does happen.’

‘What has happened in Scotland and may happen here in England and Wales is that there has been an imbalance in the judgements made between the schools performance and its history of examination performance, and taking into account individual student performance.

‘If there is an imbalance in that and they get that balance wrong then things will go badly wrong.’

Sir Michael said there would always be pupils in badly performing schools who ‘defy the odds’ and perform well, but said Ofqual should ensure they ‘drill down’ into the results of each and every school and ‘really look at it in depth’ before changing marks.

‘Youngsters and their families should have the right to appeal… parents should have that right. And that right does not exist at the moment, and I hope the government and DfE changes tack on that one,’ he said.

Sir Michael said: ‘I know it will be expensive and it could be a long and tortuous process, but we are talking about children’s lives and their futures here.’

He added: ‘We have put so much money into the furloughing scheme, we should spend a bit more on getting this right.’

Scotland’s education minister John Swinney will announce a new system for Scotland  this afternoon, amid calls for the SNP government to face an inquiry into the fiasco.

Mr Swinney’s Tory shadow Jamie Greene said: ‘It’s clear that the only way forward is for a full parliamentary inquiry into the exam results scandal to take place.

‘This has been one of the greatest failures of this SNP government and people deserve answers.’

The rethink has raised concerns that England could see a similar furore over GCSE and A-Level results.

Boris Johnson said yesterday he understood the ‘anxiety’ caused by replacing exams with assessments, after they were effectively wiped out by coronavirus. 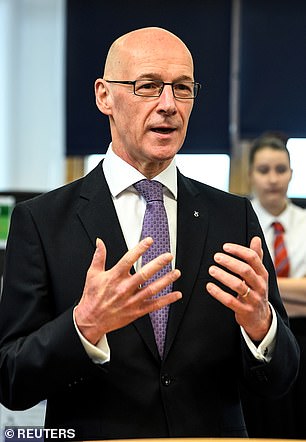 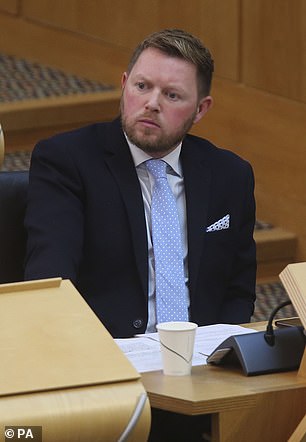 Scottish Education Minister John Swinney (left) will unveil how he intends to fix the problems this afternoon. His Tory shadow Jamie Greene (right) said: ‘It’s clear that the only way forward is for a full parliamentary inquiry into the exam results scandal to take place’

How will grades be calculated with no exams sat this summer?

After this summer’s exams were cancelled, teachers were told to submit the grades they thought each student would have received if they had sat the papers.

The predictions were sent to the exam boards alongside a rank order of which students they believed would do best within each grade for each subject.

Exam boards have moderated these school-assessed grades to ensure this year’s results are not significantly higher than previous years and the value of students’ grades are not undermined.

As part of the standardisation process, exam boards have also taken into account historical performance data to determine the proportion of students who achieved each grade in previous years.

Individual grades may have been adjusted upwards or downwards after moderation. This means that the final grade awarded to a student could be different from the one their school or college submitted.

But the PM’s official spokesman said they believed the arrangements would go ahead and be ‘fair for all students’.

Ms Sturgeon came under attack on all sides today after presiding over an exam results shambles that sparked an embarrassing U-turn on live television.

The First Minister apologised for ‘standardisation’ blunders that saw grades for 125,000 Scottish pupils marked down.

The First Minister admitted the Scottish government ‘did not get it right’, amid complaints that individual children have been punished to fit in with a model of how the overall results should look.

Both Labour and the Tories called for the SNP minister’s head today, with the U-turn doing little to quell the widespread anger.

While the SQA developed the methodology, the First Minister ‘absolved’ the qualifications authority of responsibility because it was done at the behest of Scottish ministers.

Speaking on a visit to a school in London about the exams in England, Mr Johnson said: ‘Clearly, because of what has happened this year, there is some anxiety about what grades pupils are going to get, and everybody understands the system that the teachers are setting the grades, then there’s a standardisation system.’

The Prime Minister’s spokesman said: ‘There is a standardisation process in place but if students are unhappy with their grade then they are able to appeal or they are able to take examinations in the autumn.

‘We would expect that the vast majority of students will receive a calculated grade this summer that enables them to move on to the next stage of their education or training.’

Scottish Labour is set to mount a no-confidence vote against Mr Swinney in Holyrood and the Conservatives saying they will support it.

Labour’s Holyrood education spokesman Iain Gray told the Guardian: ‘It is frankly hypocritical for the first minister to apologise today after refusing to accept for over a week that an injustice had occurred.

‘This apology is more concerned with protecting John Swinney’s job than facing up to the failures of her government.

‘A belated and forced apology is not good enough. We need an immediate return to the grades recommended by teachers for those who saw their grades reduced. It’s time pupils and teachers got justice and Swinney got his jotters.’

Universities have been urged to hold places for students challenging their A-level grades until they receive the outcome of the appeal.

Universities Minister Michelle Donelan has called on institutions to be ‘flexible’ and take into account a range of evidence when choosing which students to admit ahead of A-level results day.

It comes amid fears that students could miss out on their first-choice university if the exam boards take a long time to process appeals after exams were cancelled amid Covid-19.

Ms Donelan said some talented pupils’ achievements may not be reflected in the grades – especially in schools that have not had strong results in the past.

In a letter to vice-chancellors ahead of A-level results day on Thursday, she said: ‘We expect the vast majority of grades to be accurate, but it is essential that we have this safety net for young people who may otherwise be held back from moving on to their chosen route.’

The universities minister urged: ‘Where you are aware that a student’s grade may change as the result of an appeal, I would encourage you, where possible, to hold their place until they receive the result of that appeal.’

The Ucas deadline – for applicants to meet their academic offer conditions – is September 7, which leaves exam boards less than four weeks to issue outcomes of appeals.

In the letter, Ms Donelan said: ‘I know that the exam boards are committed to doing all that is possible to resolve appeals for affected candidates by that date. For all other candidates, the exam boards will aim to respond within 42 calendar days, and earlier wherever possible.’