England win another World Cup as Under 17s destroy Spain

England became world champions in thrilling fashion two goals from Phil Foden and Rhian Brewster’s eighth of the tournament helped power the Young Lions to an emphatic Under-17 World Cup final win over Spain in Calcutta.

It was a sensational turnaround by Steve Cooper’s side, who had been two down to the slick Spaniards inside half-an-hour.

But Golden Boot winner Brewster headed England back into the game before half-time and the second half was a one-way masterclass from Cooper’s kids, inspired by player of the tournament Foden, with Morgan Gibbs-White and Marc Guehi also scoring. There were joyous scenes at the final whistle as tearful England players and staff celebrated with friends and family in the stands who had travelled to India to roar on these Young Lions. The celebrations in front of a 66,684 crowd in this football-mad city continued long after captain Joel Latibeaudiere lifted the trophy surrounded by ecstatic team-mates.

It was an incredible last act of a memorable tournament, the youngsters emulating the feat of England’s Under-20 team, who won their World Cup four months ago in South Korea, beating Venezuela 1-0 in the final.

Cooper said: ‘It is a surreal feeling and it will probably be tomorrow before it sinks in. I am so proud of the players, what we’ve achieved, and the way we did it with such exciting football. These players have been in the system for four or five years, and they are a terrific credit to themselves, respectful and wanting to progress.

‘To come back from two goals down in a World Cup final and score five times against a team like Spain is extraordinary. I hope this World Cup and our football have left a legacy for India, which now holds wonderful memories for us all.’ 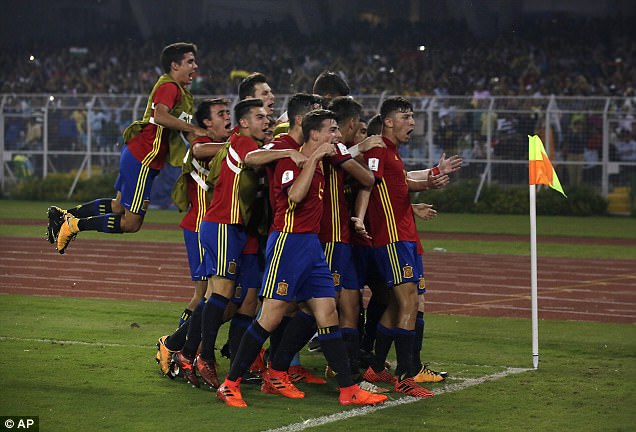 The game began at a breathless pace, Liverpool’s Brewster and Gibbs-White of Wolves combining for the first chance after just 47 seconds but it was Spain who went ahead inside 10 minutes when Sergio Gomez touched home from close range. England appealed for offside but full-back Stephane Sessegnon was playing him on.

Spain went desperately close to making it 2-0 when Jonathan Panzo’s foray left his side exposed on the counter. Moha raced into space but, having found what seemed an unmissable position, he took a heavy touch that England goalkeeper Curtis Anderson pounced upon.

There was to be no let off for England next time, however, Abel Ruiz twisting and turning to feed Cesar, who duly picked out Gomez. The forward wrapped his left boot around the ball and hooked a wonderful shot into the far corner.

At that moment it looked bleak for Cooper’s team but, once Callum Hudson-Odoi had struck a post with a solo effort, they hit back. Brewster was the inevitable scorer, with an authoritative downward header, but Sessegnon also deserves credit for having served up an irresistible cross.

England’s gutsy chase for an equaliser bore fruit in the 58th minute, Foden’s disguised pass locating Sessegnon’s overlap. His cross was perfect again, as was Gibbs-White’s timing as he arrived to clip equalise from six yards. The momentum was with England, though less than a minute later Anderson had to produce an instinctive one-handed save to keep out Juan Miranda’s header. 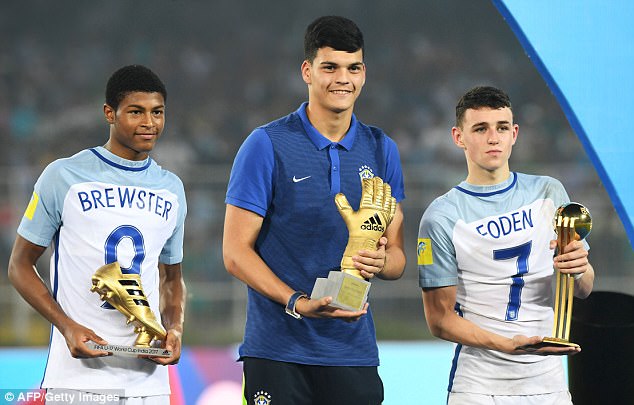 England went ahead for the first time in the 69th minute, Hudson-Odoi sliding the ball into Foden’s path at the far post, where the Manchester City ace never looked likely to miss.

Sessegnon stayed alert to block another Miranda header on the line with Anderson beaten, but England delivered the killer blow.

With five minutes left, Guehi poked the ball over the line in a scramble after Latibeaudiere had soared to head down a free-kick.

Spain were finished but England added a fifth, and how fitting that it fell to Foden, Golden Ball winner as the tournament’s star player, a goal accepted with aplomb. He took a deft touch on a through ball before rifling past Alvaro Fernandez with power and precision. It was sweet revenge for defeat by Spain on penalties in the U17 European Championship final back in May, having led deep into added time.

Liverpool hot-shot Brewster said: ‘If I’m honest I did dream about becoming a World Cup winner but to get the Golden Boot as well is unreal. Early in the tournament I missed a couple of easy chances, but I kept working hard. To score seven times in the last three games is beyond my wildest dreams.’