Environmentalists who criticised the BBC for tweeting enthusiastically about the ongoing heatwave have been mocked online for their hysterical reaction.

Campaigners including the Green Party and charity WWF heaped scorn upon the Corporation for the lighthearted tone it used when reporting the heatwave on social media.

The BBC Weather Twitter account had uploaded an image of Britain with the number 39 imposed over it, predicting that the record could be broken.

The tweet read: ‘Morning, if we’re going to do it TODAY’S THE DAY! We will of course keep you posted. Lou L.’

The Green party was among those who responded, saying: ‘Some records we really don’t want to break’

‘Breathless, even celebratory, coverage of climate crisis? This is unconscionable. For absolute shame’

Furious social media users slammed the institution with one critic replying: ‘This is a breathtakingly stupid way to frame this. I’m terrified for my children.’

But other Twitter users criticised some of the responses, telling green activists to ‘calm down’.

Environmental group WWF tweeted: ‘This is a #ClimateEmergency – not something that should be celebrated. #Hottestdayoftheyear.’

One social media responded saying ‘It’s called summer’, while another told the organisation to ‘have a day off’.

One Twitter user said 39C was not a record, it was a ‘catastrophe’, and another user told him: What, because we’ve had a heatwave that’s slightly hotter than the one before? Chill out mate’.

Extinction Rebellion spokesman Dr Rupert Read also replied, scathingly informing the media outlet that this was not an acceptable thing to say in the current year. 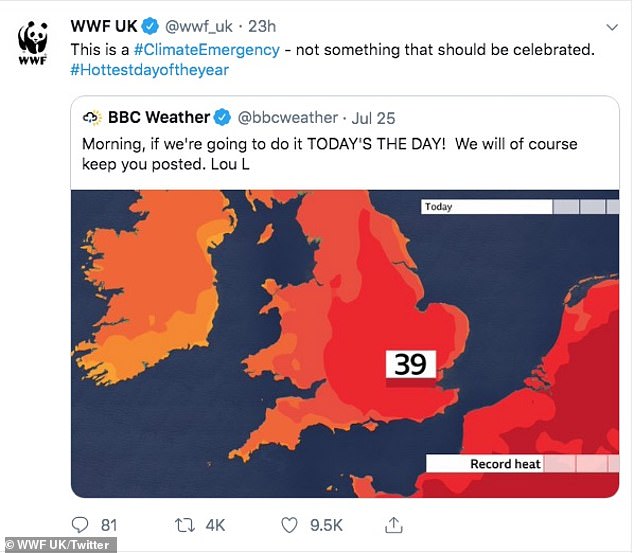 WWF UK said: ‘This is a #ClimateEmergency – not something that should be celebrated’

One Twitter user said: ‘The climate crisis is here, NOW, and it IS going to get much, much worse’ 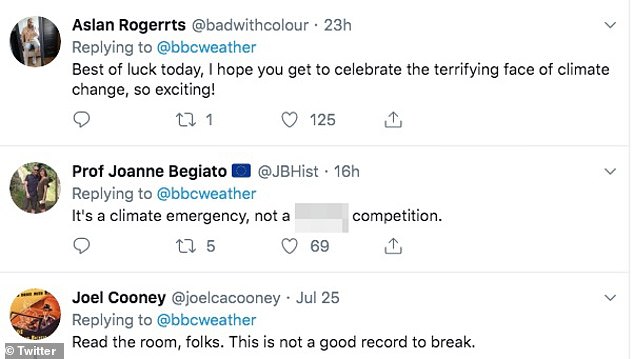 One Twitter user said 39C was not a record, it was a ‘catastrophe’, and another user told him to ‘chill out mate’

Dr Read said: ‘What a disgusting & criminally irresponsible tweet from the BBC here.

‘Breaking this record for the hottest day in British history is nothing to be proud of, you dolts.

‘It’s rather climate BREAKdown in action. BBC: come on, you can do better than this, in 2019!’

Last year the BBC accepted that it gets coverage of climate change ‘wrong too often’ after facing criticism for not challenging sceptics adequately during interviews.

A briefing sent by the broadcaster’s director of news and current affairs, Fran Unsworth, to all staff was leaked by website Carbon Brief.

In it, she said: ‘To achieve impartiality, you do not need to include outright deniers of climate change in BBC coverage, in the same way you would not have someone denying that Manchester United won 2-0 last Saturday. The referee has spoken.’ Historian and screenwriter Alex von Tunzelmann said: ‘Why are they still framing this as an achievement rather than a disaster?’

It follows as the Corporation breached editorial guidelines in 2017 for airing an interview with sceptic Nigel Lawson, in which he was allowed to deny climate change without challenge.

Media watchdog Ofcom said the institution had breached broadcasting rules by ‘not sufficiently challenging’ the former chancellor of the exchequer.

The interview on BBC Radio 4’s Today programme saw the Tory peer claim official figures showed global temperatures had not risen in the past decade.

This view, which was shown to be false by the Met Office, was not challenged on air by presenter Justin Webb.

A BBC spokesperson told MailOnline: ‘The BBC acknowledges the weight of scientific consensus around climate change and this should always underpin our reporting of the subject.

‘Meteorologists clearly have a professional interest in extreme weather patterns but we are aware of the need to strike the right tone on social media.

‘Coverage across the day touched on all aspects of the very hot weather, including potential dangers, health issues and transport problems, and our interviews and reports put the potentially record-breaking temperature in the context of climate change issues.’